After the renovation, There are still elements of the dry-goods and hardware stores that were once housed in this historic Portsmouth building. 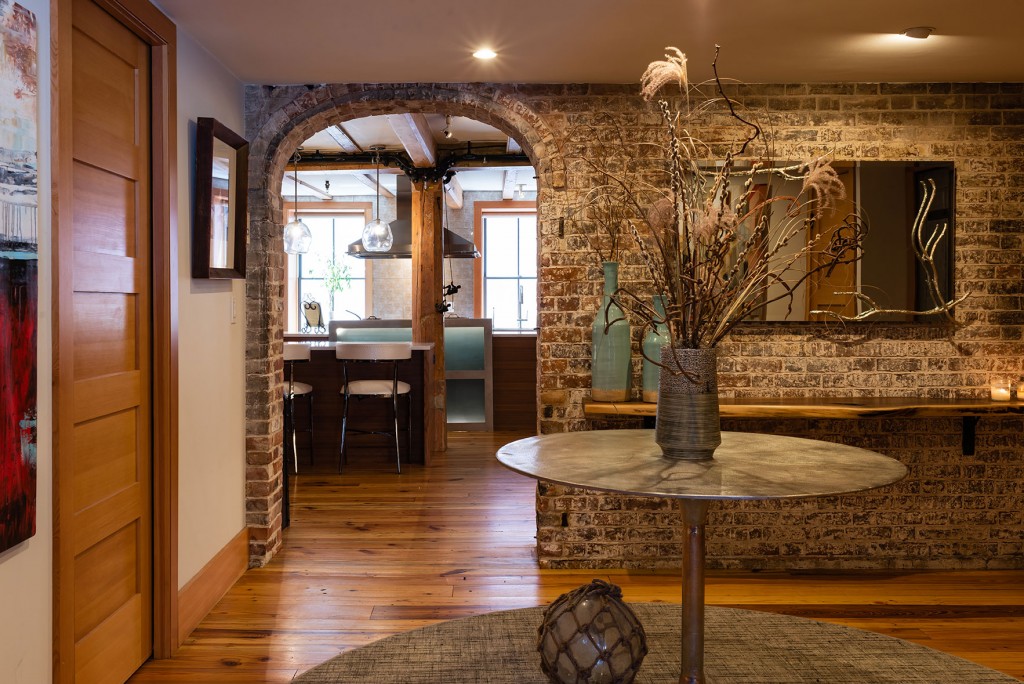 The foyer in this Portsmouth condominium mixes old and new. The original brick wall is set off by a live-edge walnut shelf; the cast aluminum, tulip-style table is from Weekender House.

Restoring a historic building and updating it for modern living requires vision … and perseverance. But, for one Portsmouth homeowner—whose two-floor condominium is in an eighteenth-century brick building downtown—being a thoughtful caretaker of history is the point.

“The building was constructed right after the American Revolution ended,” the homeowner says. “People who fought in that war walked on these floors. Someone from every decade since then has walked through the door of this building. That’s pretty incredible.” 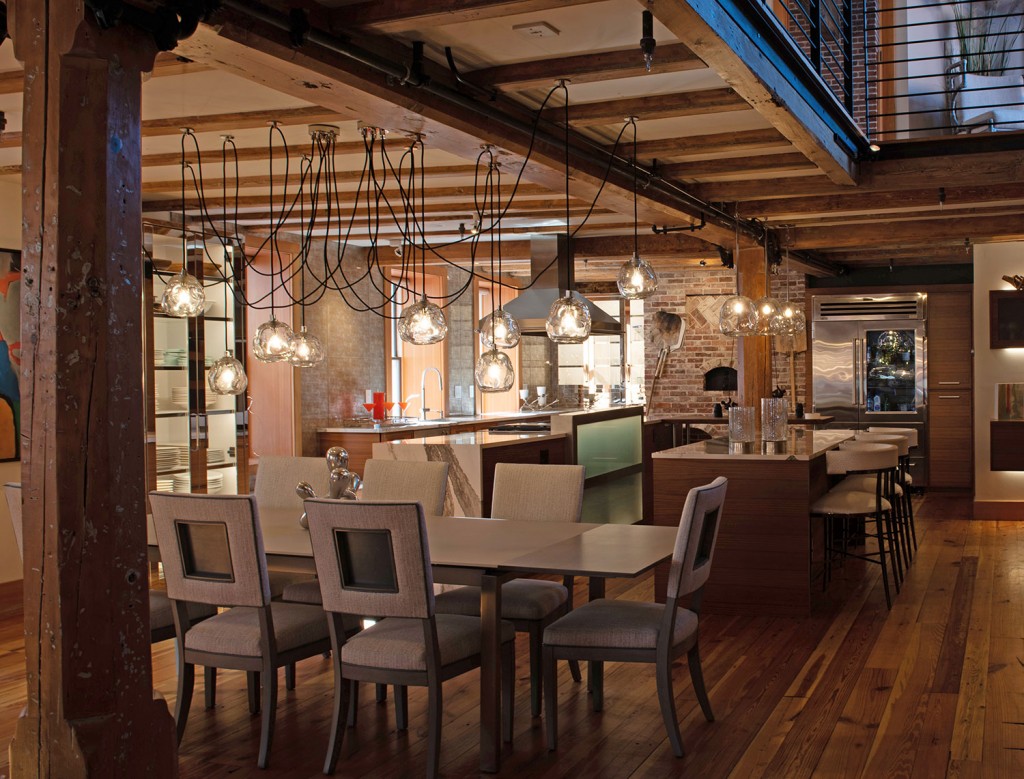 Two kitchen islands and ample seating allow for cooking and entertaining with friends. The pendant lights over the island and spider chandeliers over the dining table are from Weekender House in Portsmouth.

Carving a home from the brick building, steps from Portsmouth’s Market Square, was a labor of love for the owner and his building team, which included Tyler Jackson of Haven Hill Builders, Mari Woods of Mari Woods Kitchen Bath Home and Chad Callihan of Weekender House, all in Portsmouth. The three met the homeowner during the renovation of his first condominium in the building, across the hall from his current home. When he purchased the second condominium, in 2015, he brought the team back together to create a living space that reflects his interest in historic preservation while stylishly meeting his living and entertaining needs.

The condominium is the top two floors of the former Peavey’s Hardware store, a Portsmouth institution for more than sixty years (the building—which survived an 1813 fire that leveled most of the city—had housed a hardware and dry-goods store for more than two hundred years before the store closed in 2004). The home-owner’s current 3,400-square-foot-space was “nothing but brick walls and pigeon-poop-covered floors,” he says. But it was filled with physical evidence of the people who worked in the building from the 1820s through the 1940s as well as the tools they used: signatures on the original 1825 pine beams and walls throughout the space; a large elevator wheel-and-pulley system used to transport goods to the building’s second and third floors; original pine floors; and exposed brick walls.

The homeowner wanted to keep as much historic detail as possible in the space, which was good news for the design and construction team. “It was such a fun space to work in because it’s so unique,” Jackson says. “He (the homeowner) understood and saw the potential of the space. It wasn’t hard to be creative because there were so many things to pull from. When we designed the layout of the space, he wanted to make sure we didn’t cover up the historical graffiti.”

When Jackson first examined the raw space, it was in bad shape and needed additional structural work. To create more space on the second floor, his crew raised the ceiling two feet and moved a staircase leading from the first to second floors. The wheel-and-pulley system, originally on the floor of what is now the homeowner’s bedroom, was reconstructed and suspended from the ceiling near the staircase (the system still works and was put to use during construction, lifting a thousand-pound, forty-eight-inch stainless-steel refrigerator into the kitchen). Jackson also took apart the floor system—cleaning the original, wide-pine floors on the second floor and installing new floors on the first floor, made from reclaimed Southern pine from an old North Carolina cotton-spinning mill. All the original brick walls were cleaned with a wire wheel to remove dirt and grime. And, to prevent ambient noise from the downstairs retail space filtering into the condominium, Jackson and his crew glued a rubber mat underneath the sub-floor. Because there are no mechanical fasteners (such as nails) to convey sound, the mat is an effective sound barrier.

The homeowner’s favorite kitchen feature is the Italian-style brick pizza oven that was constructed using the building’s existing brick. The Wolf range placed in one of the center islands enables the homeowner to socialize with guests while cooking.

The first-floor living and dining spaces are where the homeowner spends most of his time. A large kitchen for entertaining and cooking with friends and family was a must. Woods had plenty of freedom to design a kitchen that was both user-friendly and welcoming to guests. “[The homeowner] had a lot of faith in us,” Woods says. “It’s the biggest compliment from a client but can also be terrifying!”

Among the early discussions Woods had with the homeowner was incorporating a hibachi table into the kitchen layout. “He’s a very social cook and wants guests to participate in the process,” Woods says. “But the ventilation requirements were complicated.” So, instead, they installed a brick pizza oven. Masons dismantled an original brick fireplace and chimney in the space, saving the bricks and using them to build a façade around the precast pizza oven, imported from Italy. “It’s my favorite part of the kitchen,” the homeowner says. “I bake bread in it, too.”

Directly in front of the pizza oven, in the center of the kitchen, are two islands, parallel to one another. One is L-shaped, containing a Wolf range and oven; the second is a bar island where guests can sit and talk to the homeowner while he’s cooking. There’s space between the two islands for the homeowner and/or his guests to move, help cook, or grab a drink from the under-counter wine and beverage refrigerators.

“[The homeowner] really wanted an environment where people could be part of what he was doing,” Woods says. “With the range in the island, facing the bar top, he can talk to guests and enjoy their company.”

The range, backed in soft-green glass, provides a stylish focal point for guests sitting at the bar island; they’re protected from the range’s heat or potential splatter. The counters and cabinets are walnut, topped with Cambria Skara Brae, a manmade quartz that’s bright white with taupe and warm gray swirls (the quartz extends down the sides of the islands as well). A mirrored backsplash behind the sink, along a wall with large windows, brightens up the space (“It’s meticulously done,” Woods says. “It looks more like wallpaper”). There’s plenty of working counter space, and two elegant, polished stainless-steel cabinets—one over the kitchen microwave and a floor-to-ceiling unit across from the dining-room table—add sparkle and additional storage. A pantry is adjacent to a forty-eight-inch Sub-Zero refrigerator.

The kitchen opens to a modern dining and living area, all furnished with pieces from Weekender House and complemented by the homeowner’s collection of contemporary art. “His design style is contemporary with a historical and industrial edge,” Callihan says.

Callihan’s biggest challenge was moving furniture into the building once the inside spaces were finished; his crew had to lift furnishings through windows or to a third-floor balcony.

An open stairway, constructed with hemlock treads and metal railings, echoes the home’s industrial feel and accesses the second floor. At the top of the stairs, just off the landing, is a six-hundred-foot outdoor roof deck—a private spot for warm-weather entertaining that offers a northwest view of downtown Portsmouth. 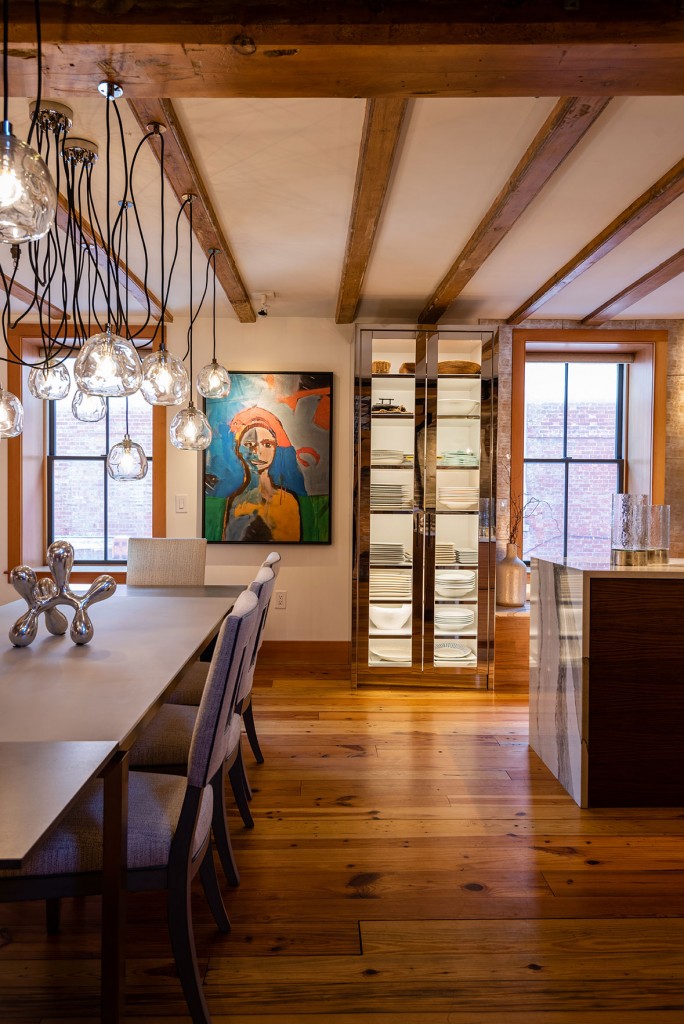 A polished stainless- steel cabinet adds contemporary flair to the dining space. The glass-and-steel dining table and chairs are from Weekender House.

Historic details are found throughout the second-floor living spaces. Mounted on the brick wall facing the landing are reproductions of photos of historic Portsmouth that the homeowner found at the Portsmouth Athenaeum. Showing scenes from the nineteenth and early twentieth centuries, they perfectly complement the industrial space. Nearby on the wall is a handwritten phrase “3 thread 19 sewing,” evidence of the building’s past as a dry-goods business. A beam in the homeowner’s office is signed by various Peavey’s Hardware employees over the years, including Charles Beatty, who signed his name as a young clerk in 1942 and worked at the store for sixty-two years, eventually becoming the owner.

The bedrooms are simple, with high ceilings and exposed brick walls. In the master bedroom is a built-in bookcase with cantilevered shelves that Jackson constructed from hemlock salvaged from his own barn in Kittery, Maine.

The sleek master bath is reached through a spacious walk-in closet constructed of Douglas fir, the same material used for doors and trim throughout the home.

“A lot of the bathroom design was about highlighting the beam and making the rest of the space open, airy and very Zen,” Woods says.

An exposed beam with the painted signature “R.R. Allen” runs the length of the large, porcelain-tiled shower. A floating vanity in walnut with double sinks is topped by a hovering rectangular mirror; LED lights behind the mirror create a warm glow.

The home is a special place. “People walk in and their jaws drop when they see the space,” Callihan says. “It’s a one-of-a-kind home. It truly can’t be replicated.”

The homeowner agrees. “I wanted a place with a soul,” he says. “I think about the people who worked or walked through this building, and I wonder about the stories they could tell. It gives me goose bumps to think about.”