This couple gives their antiques new roles at center stage.

As owners of Prospect Hill Antiques, a successful business in Georges Mills, Barbara and Ron Sullivan’s lives are intertwined with nineteenth-century English and Irish antiques. When the couple moved a few years ago, downsizing from a 110-year-old Victorian home, it wasn’t just a question of deciding what to keep and what to give away: the Sullivans wanted to showcase their favorite pieces and re-fashion others to suit their needs. Their home, near Lake Sunapee, is a beautiful example of how re-purposing antiques adds character and functionality.

Creating the home of Barbara and Ron’s dreams, however, required planning. The couple had been collecting antique pieces for future use, a process that takes patience and vision. “We really had to start with where we wanted to place furniture,” Ron says. A talented woodworker and tinkerer, he spent hours measuring, taping and noting in chalk where he wanted everything placed in the new home. “We had to think through everything, down to the light fixtures,” he says. “I knew the pieces and elements I wanted to use. We had to design all the spaces and walls to incorporate them.”

Working closely with Sue Booth of Vintage Kitchens in Concord and builder Brent Stocker of Stocker Woodworks in Sunapee, the Sullivans made their dreams reality. “Most people wouldn’t have the vision to make the changes necessary to create a house with such character,” Booth says. “Ron and Barbara did.”

Piecing together the house of their dreams

The Sullivans bought their home in 2011. Built in 2006 on a hill, it was a basic, three-bedroom house. “We love the location near the harbor, and we love Sunapee,” Ron says. “We thought if we added on to the house and gutted the main floor, we could make it what we wanted.” The original dining room and a downstairs bedroom were transformed into a new kitchen; for first-floor living, the Sullivans added 1,200 square feet to create a master suite, including a bedroom, master bath, sitting area and laundry room.

The heart of the Sullivan home is the gourmet kitchen, a sunny, open space filled with antiques. Nearly every piece in the room, except for the appliances, has been refashioned to make it more functional in a modern home. Barbara loves to entertain and knew exactly what she wanted in her kitchen. “Ron and I cook together a lot,” she says. “A six-burner range, a warming oven and a Sub-Zero refrigerator were on my dream list.”

She got them and more. The kitchen, which Booth calls the ultimate blend of old and new, was carefully planned. “The Sullivans weren’t afraid to rework an antique piece to meet their needs,” Booth says. The design began around the antiques the Sullivans wanted to use as well as a desire for a center island that accommodated guests but had surrounding space so they could cook together easily. The center island, formerly an old country store counter, became the kitchen’s focal point. Ron is especially proud of the island’s louvered doors, which once were mahogany window panels on a Victorian Pullman train car; he’d had them for years. The island and other kitchen countertops are low-shine textured granite; the center of the island is topped with butcher block from a friend’s office. 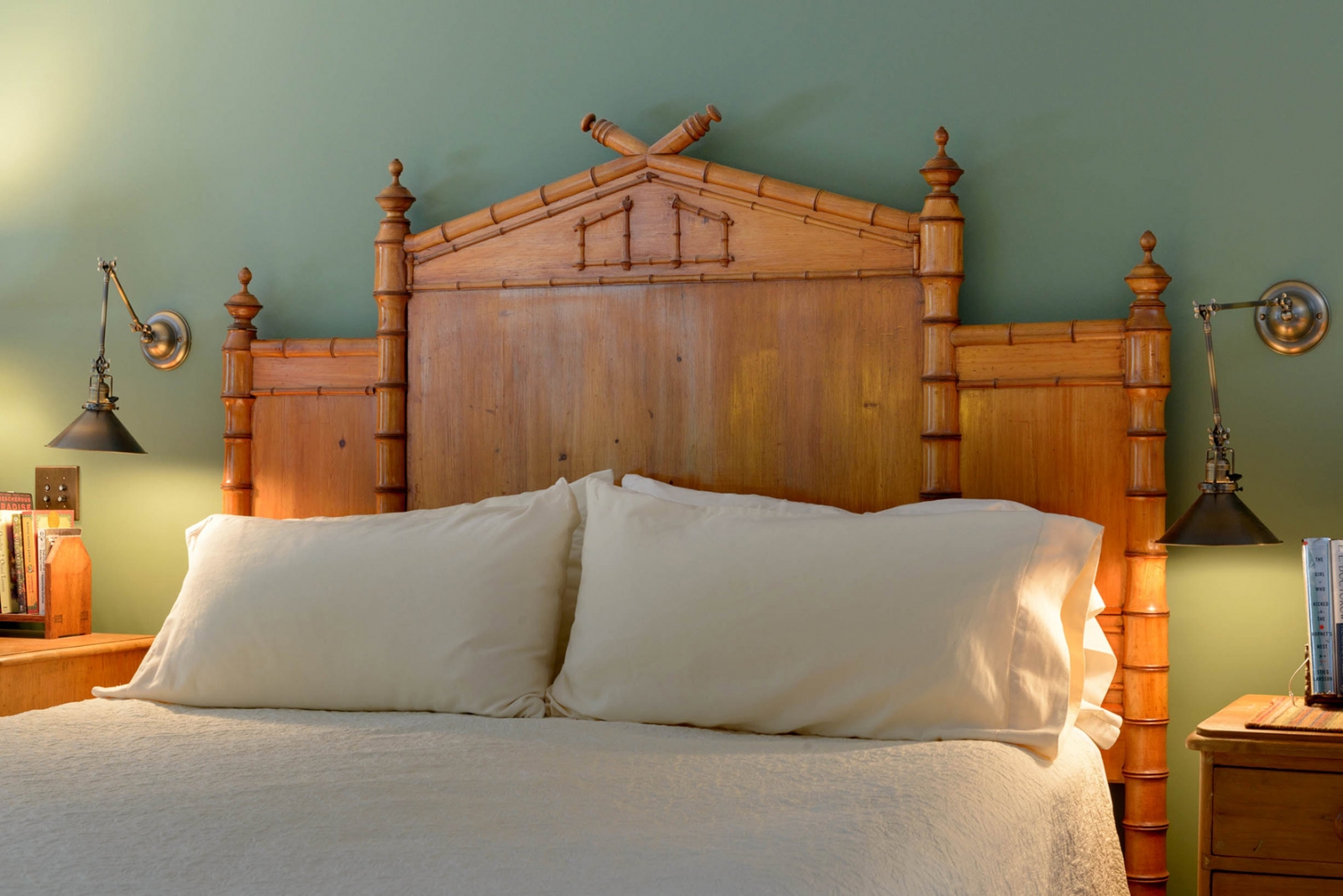 The late-nineteenth-century pine headboard on the Sullivans’ king-sized bed was originally fifty inches wide. Ron Sullivan sawed the matching footboard in half and attached the halves to either side of the headboard to create a new one.

Other antiques in the kitchen have been put to work. A Hungarian sideboard was topped with granite and transformed into a coffee station; it stands near the built-in Sub-Zero refrigerator (which opens using a bronze handle from the front door of a bank; “Less than half the cost of a new one,” Ron points out). The wainscoting around the room was created from the bead-board drawers of an old printer’s cabinet that Barbara found in a salvage yard. The distinctive backsplash behind the stove is from a section of tin ceiling, also found at a salvage store. The floors are made of reclaimed oak beams originally from a Massachusetts factory, but purchased and milled at Bingham Lumber in Brookline.

Thanks to Booth’s design, it all fit together beautifully. Stocker told Ron he’d never installed a kitchen that went so smoothly.

A living space with a sense of surprise

Ron’s love of building and re-purposing antiques is evident in every room. “I’ve been antiquing and recycling since I was twenty,” he says. In the high-ceiling living room, he designed and built an oak TV cupboard (complete with hydraulic lift) and installed the circa 1840 Irish fireplace surround. In the dining room, he designed and built the hand-hewn cherry dining set and converted the front of a dish cupboard to a corner cabinet.

There’s more of Ron’s handiwork in the Sullivans’ first-floor bedroom suite. A spacious hallway opens onto the master bedroom, giving the space an element of surprise. Small alcoves with an antique chair, table and dresser give a sense of coziness. All the light fixtures are antique; the door thresholds are made of old church pews that Ron took apart and re-built.

Ron nearly outdid himself, however, creating the headboard of the couple’s king-sized bed. Part of a set, the late-nineteenth-century pine headboard with a bamboo motif was originally fifty-inches wide. Ron sawed the matching footboard in half and attached the halves to either side of the original headboard. Result: a new headboard constructed for a few hundred dollars. “A headboard like this would now cost around $3,000,” Ron says.

The master bathroom is large enough to contain separate sinks for the couple (fashioned from an antique server and a former French boudoir dresser) as well as a six-foot cast-iron tub and a walk-in shower.

By integrating beloved antiques throughout their home, the Sullivans created a unique living space that embraces tradition and modern living. “Any house can be made special with a little thought and creativity,” Ron says. “You have to trust your imagination.”