A homeowner adds her special touches to the landscape she and her late husband cultivated together. 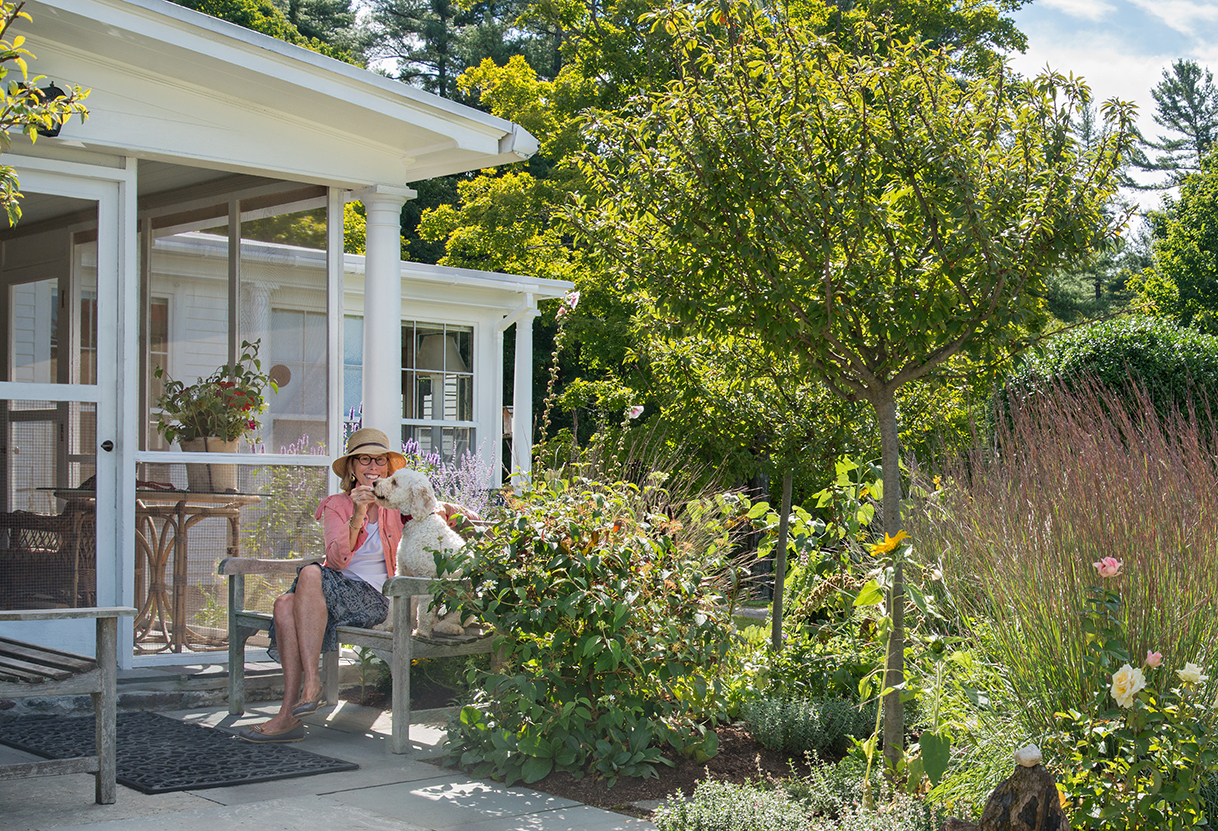 Stella Sise and her constant companion, Leo the goldendoodle, take a break on a bench in her porch entry garden, which was redesigned by Jenny Lee Hughes of Stoddard.

Gardening is one of the oldest healing arts and can be a source of comfort during times of emotional upheaval. Gardening keeps us in touch with the eternal rhythms of life and fundamental elements that ground us. Simple acts such as raking and weeding can bring order to one corner of our lives.

When Stella Sise’s husband Jim passed away in January 2014, she wanted to create a memorial garden for him. “His illness robbed him of the ability to do most of the things he enjoyed—reading, watching the evening news, even holding a conversation—but he could still garden,” Stella explains.

Stella and Jim moved to their 1790 Colonial home in Keene more than thirty-five years ago. “Jim worked as a general surgeon at the clinic, and I had a two-year-old, a six-year-old, and was pregnant again when we moved here,” Stella says. 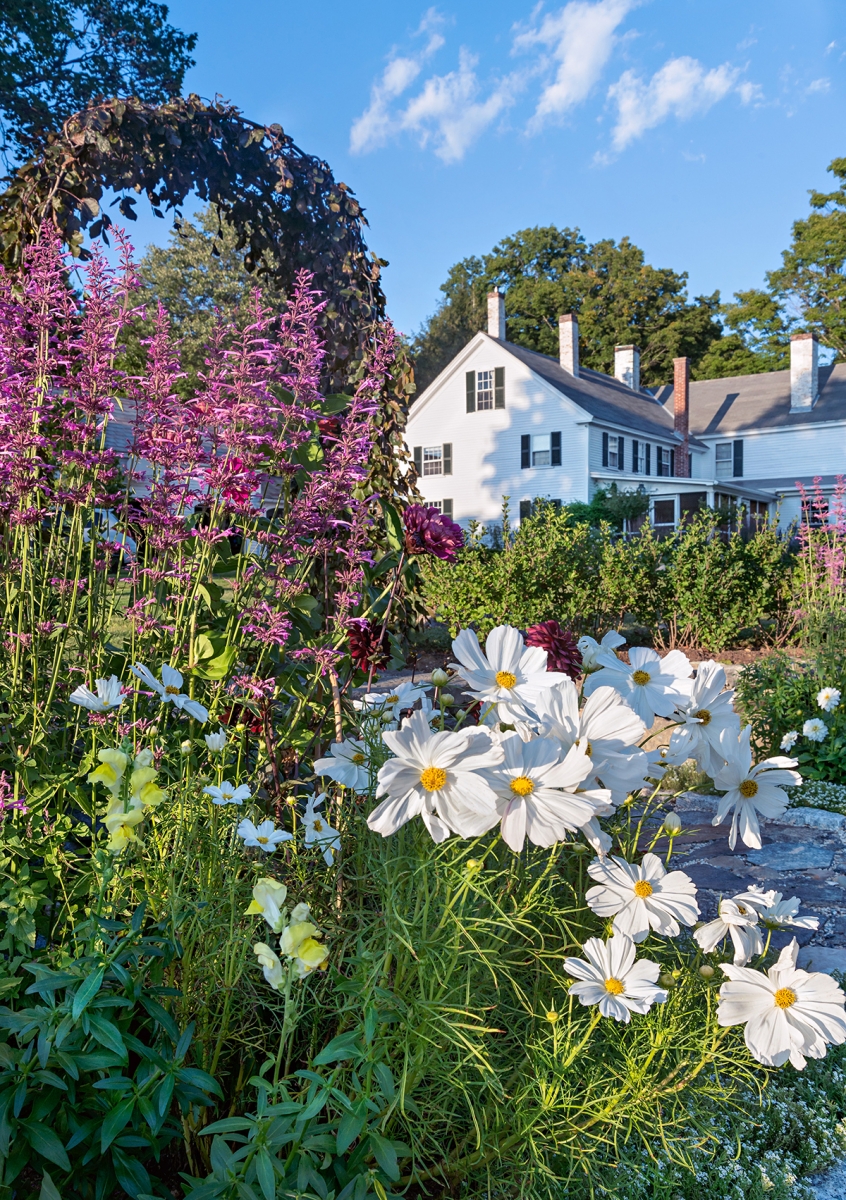 The house was built in 1790 by the Wright family, who were mill owners in Keene. Stella Sise ran a B&B here when her children were little. “It was something I could do and still be home with the kids,” she says.

She describes the soil on their fourteen-acre property as pure clay. “But there was one fertile area on the crest of that slope,” she points out. “We surmised that was where the old manure pile had been, so that was where Jim planted his vegetable garden.” There was already a rhubarb patch nearby, old grapevines and a large stand of Siberian iris. On the other side of the house were ancient apple trees and native ferns battling with a swath of daylilies. “When we first moved here I didn’t know who would win, the ferns or the lilies,” Stella says. The ferns did!

In typical New England fashion, the Sises gardened around the rocks they couldn’t remove. Eventually Jim moved the ones he could with his Ford 9N tractor and used some to create a stone terrace near the kitchen door. “It took him five years,” Stella laughs. “We could have hired someone to do it in a few days, but he enjoyed doing projects like that himself.” Stella and Jim ripped out some old bushes, and she planted a narrow border garden next to the new terrace.

Jim was known at the hospital for his love of gardening. Surgical tech Jeanne Bearor, also an avid gardener, worked with Jim and said they often talked about what each was growing. “He lightened the mood in the operating room with stories about his garden and his family,” Bearor says.

“Jim loved being outside,” Stella says, “and he involved our children as well. Each year, they would enter things they had grown in the Cheshire Fair. Over the years, we had horses, donkeys, rabbits and chickens, and all that manure went into the garden. All three of our children grew up to be gardeners.” 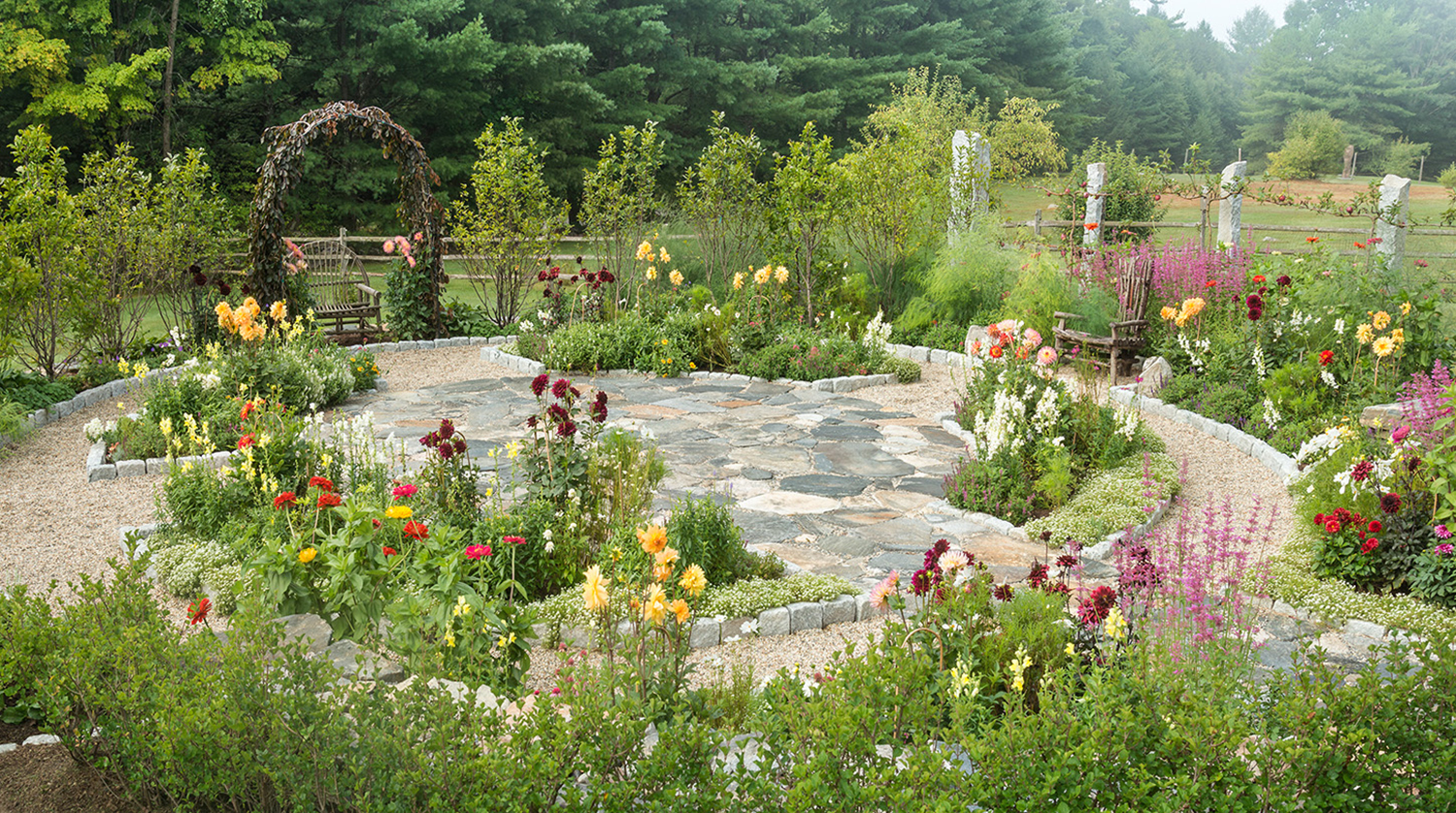 The beautifully designed memorial garden has lots of planting beds for annuals, bulbs and perennials. Through the growing season, the colors change, starting with pinks, blues and white in the spring and ending with golds, dark reds and purple in the fall.

A few years ago, Stella hired garden designer Jenny Lee Hughes of Stoddard to redesign the area near the house into a larger, more welcoming porch entry garden. “It was a nice garden already on a beautiful old farm, but we moved around what was already there, reshaped it and defined the spaces differently,” Hughes says.

Among the flowers there are old-fashioned single hollyhocks that annually reseed themselves, daisies, thalictrum, yarrow, delphinium and peonies—all cottage garden favorites. Stella and Hughes added three dwarf crabapples and a row of boxwoods to delineate the path. “Stella really loves old stone, so we incorporated some of that, and she has a collection of driftwood that she brought back from Lake Champlain that we used to line the walkway,” Hughes explains. “They look like sculptures.” 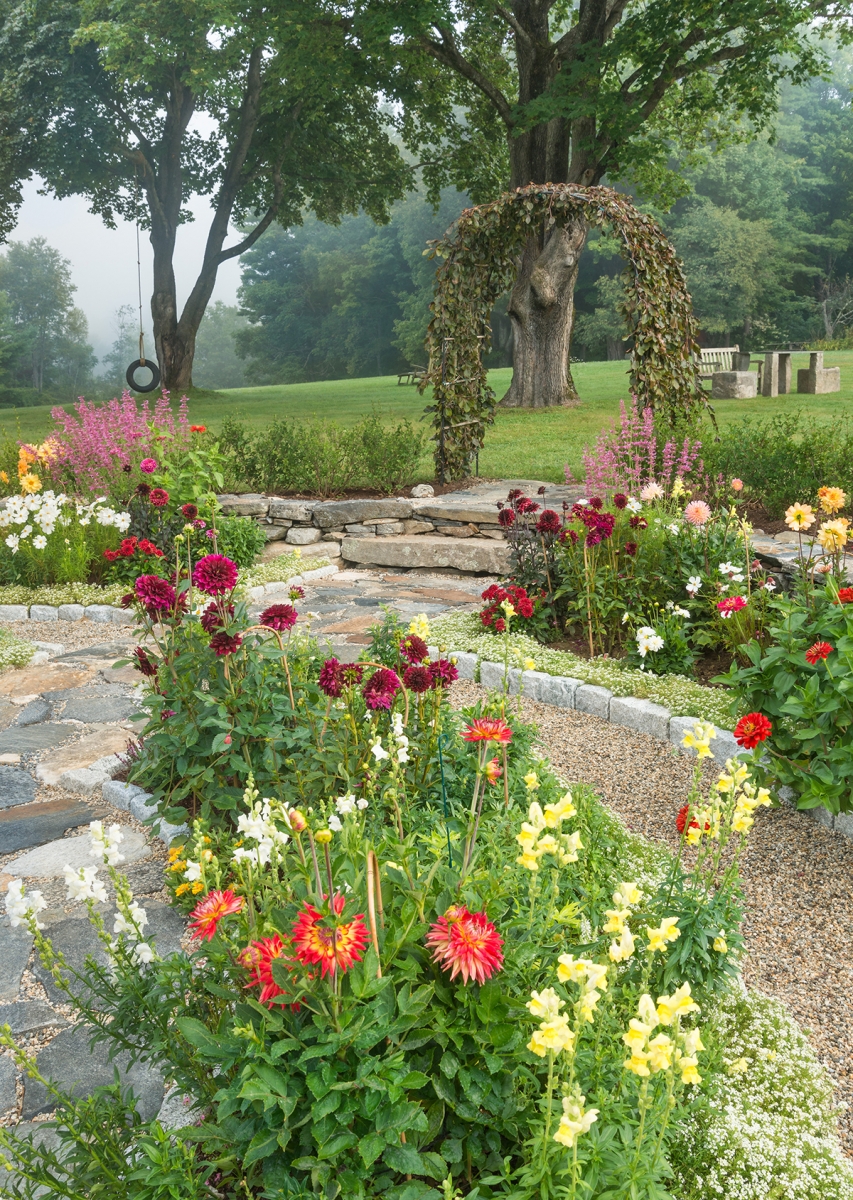 Snapdragons, daisies, dahlias and an abundance of other annuals ensure seasonlong color and plenty of flowers for cutting. Stella Sise’s three children and three
grandchildren love the new garden.

After Jim passed away, Stella re-enlisted Hughes’ aid in designing a memorial garden where his vegetable garden once stood. “She drew up several plans for me to choose from, and we went from there,” Stella says. It was important to start work on the garden as soon as possible that spring so it could be ready for the memorial service Stella had planned for May 31.

Errol Cousins of Stoddard did the stonework, using rocks from the property to build retaining walls on two sides to level the slope. “Things evolved, and you have to go with the flow,” Stella says. “Sometimes a design is improved because of everybody’s ability to make last-minute changes.”

The new garden is a classic circular design with a weeping copper beech covering the arbor at the entrance. It is flanked by hedges of dwarf Korean ‘Palibin’ lilacs. A few steps down lead to the center circle, which is paved with flat stones taken from the pasture. Stella has placed Jim’s ashes under a large heart-shaped stone in the center.

On the opposite side from the entrance there is another, similar beech-covered arbor and a row of magnolias ‘Jane’ and ‘Ricki’ planted along the retaining wall. They have pink, tulip-shaped blossoms in the spring, right around Memorial Day. On the east and west sides are rustic chairs in front of espaliered fruit trees—three pears on one side and three apples on the other. Flowerbeds surround the perimeter of the garden and are connected by paths to the center circle where four more semicircular beds lined with cobblestones are filled with colorful annuals.

Since Stella likes to have flowers that she can cut and bring inside for bouquets, Hughes and her crew planted lots of flowers, some with fragrance and others with long stems for cutting, such as dahlias, cosmos, catmint, lavender, bachelor buttons, zinnias, salvias and snapdragons. 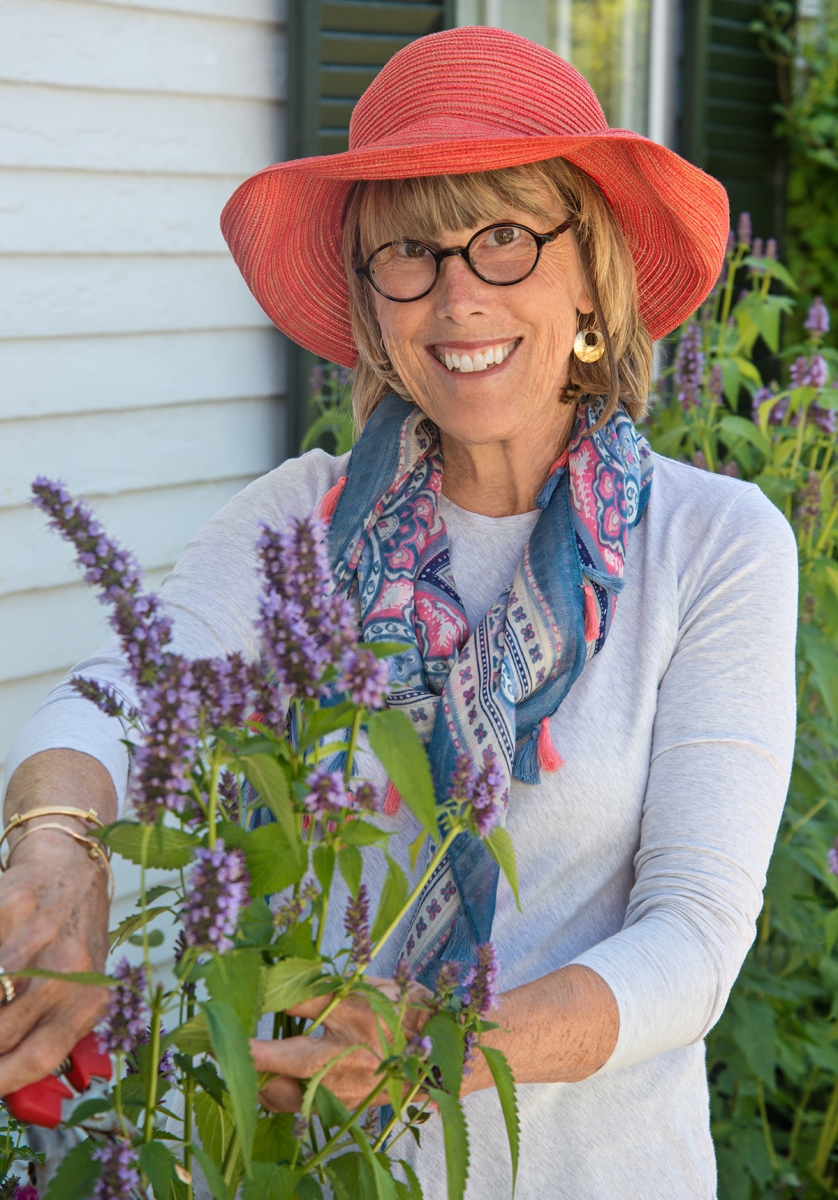 “This garden is a reflection of Stella,” Hughes says. “She’s a great person with a great spirit, very artistic and open to ideas outside the box. We had fun making this a magical space that feels like a hidden or secret garden. It is always wonderful to work with someone who is excited about the project.”

Stella had always wanted a more structured garden but met with resistance from Jim. “I was form, and he was function,” she explains. “He would say, ‘Why would you want all those little beds when you could just plant straight rows?’”

She looks on this garden as something new, not a continuation of a legacy. “I’m working in the same place he worked but doing it differently,” she says. She finds the new garden to be a contemplative space, even though it is a riot of color, and she enjoys going out there daily to sit and weed. “Gardens are a place of hope and promise—and surprises! Here I can simply be in the present moment,” she says.

Each spring, Jim’s asparagus still comes up in the garden and Stella plants cosmos next to it. “They look pretty together,” she says. “The garden is my project now, but the asparagus reminds me Jim is still here, pulling weeds beside me.” 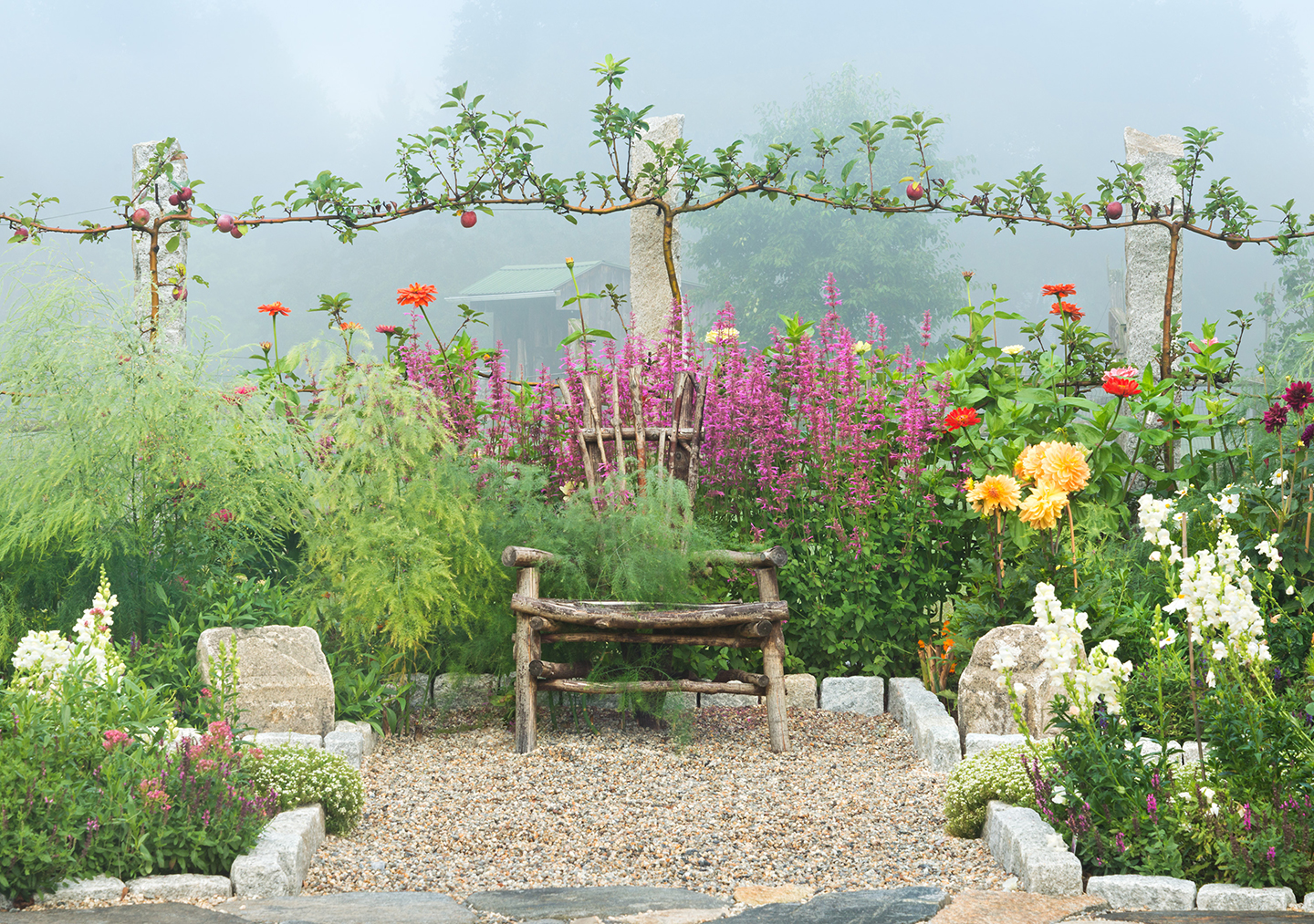 Three espaliered apple trees grow behind the rustic chair at the east side of the circle. Fronds of Jim Sise’s asparagus mingle with orange zinnias; dark red and gold dahlias; white snapdragons; and pink agastache, reminding Stella Sise of her husband’s continued presence in the garden.
Categories: Gardening & Landscape