Creating an enchanted Christmas in your home

A Holderness homeowner and an interior designer created unique, welcoming and memorable décor for the holidays.

Preparing to host a houseful of friends and family over the holidays can be a daunting task, especially if your home is large and the guest list is lengthy.

Because Austine Howard of Holderness likes to have her guests feel as though they are staying at a five-star hotel with fluffy towels, luxurious bedding, antique quilts and flowers in every room, she called on Karen O’Shea of New Hampton to help her decorate. O’Shea has turned her love of art into an interior and landscape design business called Tranquil Spaces. She is also a professional organizer who specializes in bringing order to her clients’ homes. In the past, the two women have collaborated on a number of projects at the Howard home—ranging from flowers for parties to a linen closet makeover to outdoor landscaping—and they have become close friends.

“In addition to having our family with us, we had also invited a number of friends who had never been with us during the Christmas season. We especially wanted our home to be welcoming, with every room decorated and fires in the fireplaces,” Howard says. “So I was thrilled to have Karen’s help.”

Not the same old, same old

Howard and O’Shea wanted to break with tradition a bit. “It is fun to think outside the box, and we both love to play with color and texture,” O’Shea says.

Howard and her husband, George, are familiar with traveling off the beaten path: they have turned their home, which was featured in the March/April 2012 issue of New Hampshire Home, into a one-of-a-kind masterpiece designed around their unique architectural salvage finds. Plus with 2011 marking the first holiday season in this home, Howard wasn’t too bound by family traditions. That’s not to say Howard and O’shea started completely new—they did use many of Howard’s decorations from past years but put a different slant on things. “One of my passions is figuring out different uses for objects and materials,” Howard explains, “and Karen is great at that.”

O’Shea added elements from her own stash to the mix. The tree in the living room is an example of their blended collections, with O’Shea’s blown-glass Victorian Chinese lanterns complementing Howard’s old-fashioned colored Christmas tree lights with their tin reflectors. “It was one of the most beautiful trees we’ve ever had,” Howard says.

O’Shea suggests that if you are tired of decorating with same old things every year, why not trade some of your decorations with a friend who has similar taste and create a whole new look. “It’s interesting to see how unique pieces can work together,” O’Shea says.

When decorating for any season, O’Shea advises taking one important element of the room—such as a piece of artwork or the carpet colors—and playing off of that. “I like to start with the most treasured piece a client has. When I see what they love, I can make that feeling come through in the rest of their rooms,” she explains.

The Howards’ living room is warm and inviting in any season with its mellow paneled walls; wood coffered ceiling; comfy furniture; and hand-painted wallpaper designed by Howard and artist Kelly Decker of Elisabeth Kelly Designs in Sandwich. For the flower arrangements on the mantel, O’Shea selected the peach and coral tones from the room’s Oriental rug. Instead of traditional red roses and poinsettias, Free Spirit roses, which are one of Howard’s favorites, were used along with the airy genestra, juniper and pepper berries. “The lush mix of greens helped to bring the outdoors in,” O’Shea says. “It is a pleasure to design floral arrangements for this home with its brick, rich woods and unique antiques. Everything looks good!”

O’Shea—who has completed projects ranging in style from Asian modern to shabby chic—likes to work with and showcase her client’s collections to create vignettes throughout the house. Howard has many collections of beautiful pieces, such as colored-glass sherbet dishes; glass and silver candlesticks; vintage linens; and antique silver. 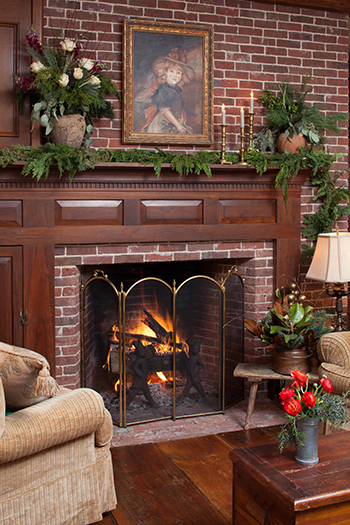 After dinner, guests can cuddle up by the fire in the keeping room. Designer Karen O’Shea kept the flowers simple and understated so they wouldn’t compete with the dining area’s decorations. Evergreen roping echoes the greenery used in the rest of the room.

Both women say their individual decorating styles complement each other. “We don’t take design too seriously,” O’Shea laughs. “No egos are involved. I have never met anyone who loves to play with color and fabric as much as Austine does. Working with her is the ultimate in fun! I like the challenge of jumping into other people’s different styles. Austine has a flair for rustic elegance that works great at Christmastime.”

O’Shea used evergreen roping to frame doorways, windows and mantles, and filled containers with mixed greens from the property. “Austine’s decorating style is often quietly elegant, and I like to enhance that approach by bringing in the outdoors,” O’Shea says.

One of the things Howard did to make Christmas special for her two grandchildren was to bring down a large dollhouse from the upstairs Alice in Wonderland playroom. She placed the house in the foyer and decorated it for the holidays. “My grandmother had tiny, ice-skater figurines she would place on a ‘pond’ made from a mirror with cotton around it like snow. I wanted to pass that memory on so I made the same kind of pond and put it in front of the dollhouse for them. You should have seen their eyes light up when they saw it!” she says. “My granddaughter was especially enchanted!”

This Christmas, Howard is again expecting a houseful and says she will definitely be calling on O’Shea for help. “I tell everyone, ‘Just call Karen!’ Her arrangements are incredible and she is a joy to work with.”

View more photos from this feature: