The works of fine-art printmaker Peter Pettengill are part of many prominent collections, including those at the Library of Congress, the Museum of Modern Art and the Whitney Museum of American Art.

In addition to being giants of the contemporary-art world, what do Louise Bourgeois, John Cage, Willem de Kooning, Walton Ford, Sol LeWitt and Neil Welliver have in common? Their works have been printed by Peter Pettengill at his Wingate Studio, located on a fifty-five-acre farm in Hinsdale, a quaint town a stone’s throw from Vermont and Massachusetts in the Connecticut River Valley. Pettengill is the fourth generation of his family to live and work on this farm.

Pettengill founded the studio in 1985, returning to New Hampshire with his wife, Deborra, and their young son, James, after learning his craft in California. Pettengill set up a press in a barn where his maternal grandfather, James Gillespie (after whom Pettengill named his son), had a color portrait studio. In the 1960s, Gillespie made a space for his young grandson to work in the darkroom.

Eventually, Pettengill’s parents moved to the farm to take care of his grandmother, and then Pettengill and his wife moved there to take care of his parents. Today Pettengill’s daughter, Olivia, also lives at the farm and runs Wingate Farm, whose primary products are year-round eggs (from almost one thousand chickens) and a summer CSA (community-supported agriculture) that features lots of vegetables and flowers. Son James and his wife, Alyssa Robb, live nearby in Northampton, Massachusetts, and they’ve been working full-time at Wingate Studio since 2015.

New Hampshire Home [NHH]:  You have become a printmaker of national renown. How did you establish yourself in this field?

Peter Pettengill [PP]: I had graduated with a degree in comparative literature from the University of Massachusetts at Amherst and was getting ready to apply to the University of California at Berkeley for a master’s degree in library science when I found work at the Pettingill Book Bindery in Berkeley. It was a mom-and-pop operation, and they began teaching me the craft.

A few months later, I was approached by Kevin Parker, who hired me to work for his bindery, also in Berkeley. Six months after that, I was hired to replace a printer at Crown Point Press in Oak-land. The company was owned by Parker’s mother, Kathan Brown, and worked with very important artists, such as John Cage, of whom I was a fan. I stayed six years, from 1979 to 1985, working with artists Wayne Thiebaud, Sol LeWitt and Pat Steir, among others. 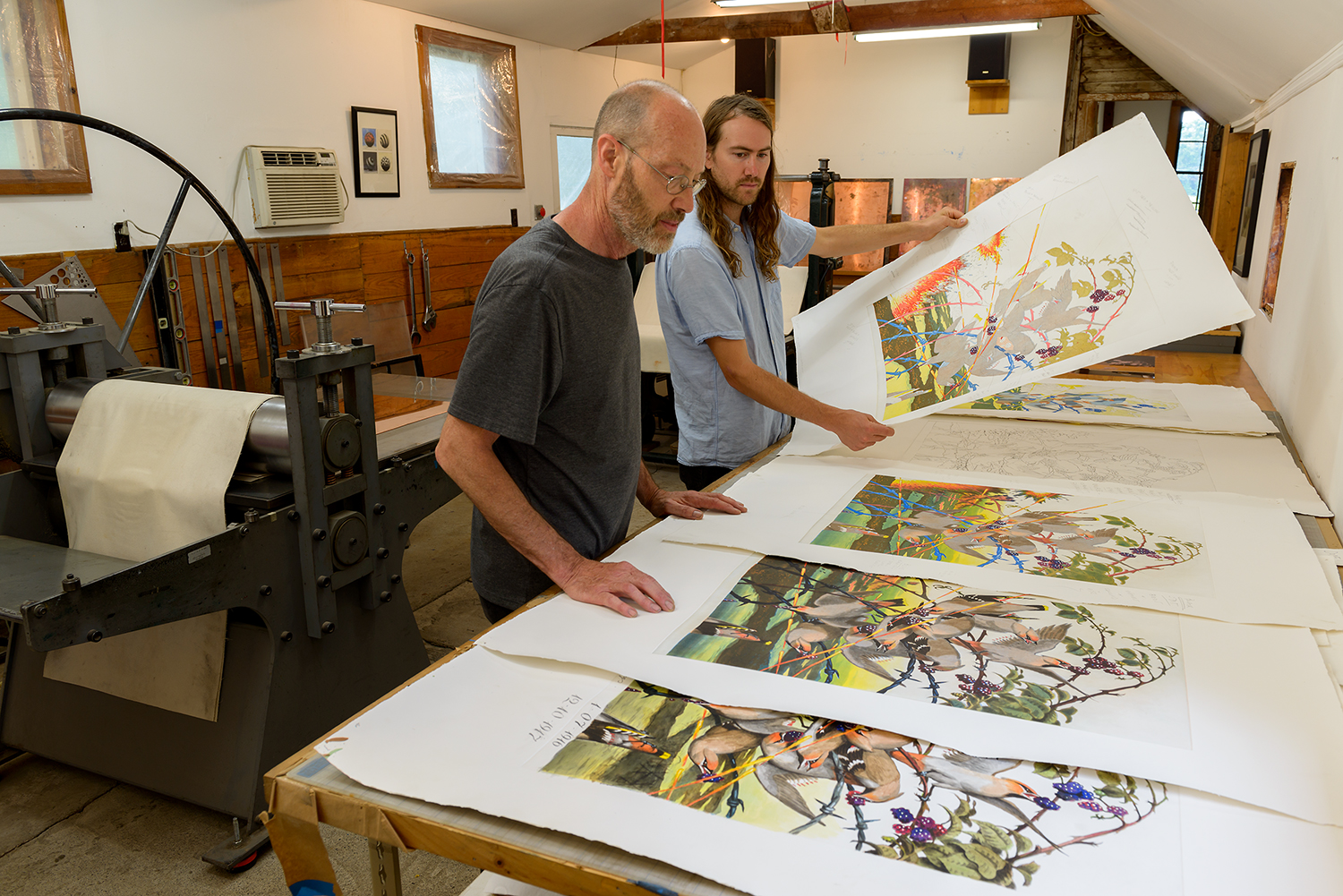 Peter and his son, James Pettengill, examine and sort the working proofs of Walton Ford’s Pestvogel. These prints have gone through the press multiple times, as there is one copper plate for each color of ink.

NHH: How did you work with these artists?

PP:  Kathan Brown’s model was to invite an artist for two weeks, during which time two or three printers would collaborate on ideas for original work. This was a great way to learn to work with artists because many had very unconventional ideas and we were asked to do some unlikely things. For instance, John Cage made some unusual visual art by setting a piece of paper on fire before running it through the press.

Cage and Sol LeWitt had the biggest impact on me. LeWitt was the first artist I worked with in California, and I worked with him again in New Hampshire. He’s a generous soul and nice to work with, and the geometric abstraction of his art appeals to me. He played a leading role in the conceptual art movement and famously wrote that “the idea is the achine
that makes art.”

NHH: What is the genesis of Wingate Studio?

PP:  I consider New Hampshire home, and missed my family and the seasons. I began networking with letterpress people, tradespeople and binders in the Pioneer Valley area of Massachusetts, and found people who needed printing. So I asked my grandmother if I could set up a press in the barn. I did some limited runs of beautiful hand-bound letterpress books. 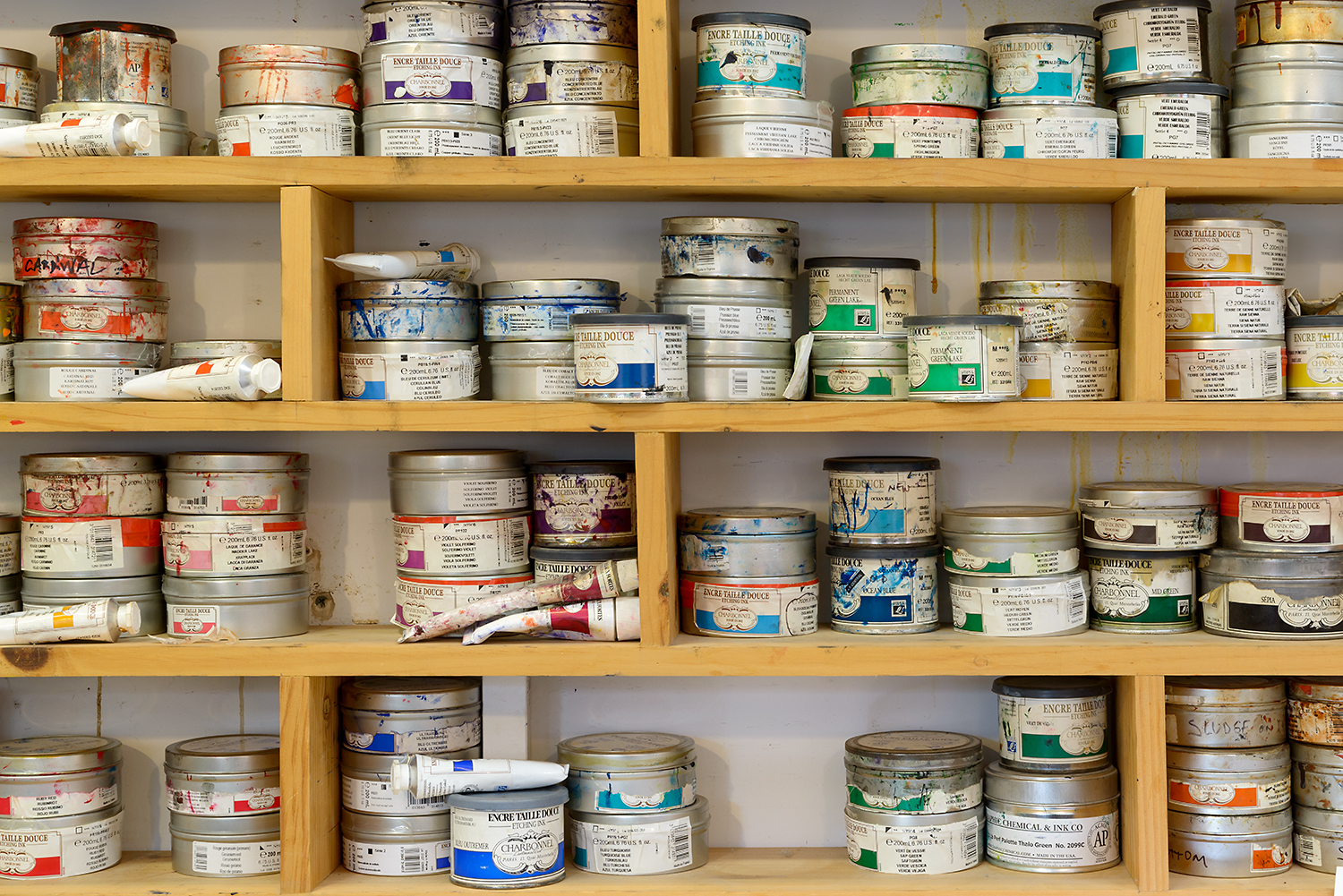 Cans of Charbonnel etching ink are arranged by color at Wingate Studio, ready to be used to make color prints.

My parents were then living in the farmhouse, which was built around 1900, to take care of my grandmother, Sallie. Deborra and I built another house on the farm property in 1990.

It’s very exciting that James and Alyssa are now working with me full time. James grew up in the studio and absorbed a lot, since the artists stay with us when we’re working together. James studied painting at Hampshire College and helped start a gallery in Philadelphia after he graduated. He has a lot of experience and familiarity with a younger generation of contemporary artists, such as Sebastian Black, Sascha Braunig and Sara Greenberger-Rafferty.

NHH: How do you find artists to work with?

PP:  We choose artists and invite them to work with us. I guess you could say what we do is really a publishing venture, since we produce artists’ work and then market it and sell it.

Artists tell me that part of Wingate Studio’s appeal is that we continue to work in the old, traditional way of making prints. Every image is unique in the way the plates are etched and how the paper takes the ink. The way we work is essentially the same as how the great Spanish artist Francisco Goya made prints in the late-eighteenth and early nineteenth centuries.

NHH: How do you make prints?

PP:  We specialize in intaglio etching, which means we print from copper plates that are coated with acid resist. The artist draws through this; then the plate is put in a ferric chloride bath to bite into the exposed copper, which makes incised lines in the plate. In order to get tonal areas and solid colors, we dust the plates with powdered rosin, melt it and then etch the plate.

To print, we force ink into the incised lines, wipe the surface of the plate clean, then run it through the press to print with a sheet of paper. That’s one print. We go through the process again—reinking, rewiping—when we do color prints. For color prints, there is one plate per color. Each one is inked and wiped, and needs to be registered correctly. A fair amount of skill is needed to wipe the plate in order to leave as much ink as you can in the right places and clear away what needs to be cleared.

NHH: Where can we see your work nearby?

PP:  Deborah Disston, who’s the curator at Southern New Hampshire University, has a Walton Ford print in the school’s collection. There’s also a set of prints by Ambreen Butt, a Boston-based Pakistani American artist, in the Currier Museum of Art’s collection.

We visit institutions, which is how museums, universities and other organizations purchase our work. We do print fairs all over the country, which helps us reach individual  collectors, art advisors and consultants. Galleries also show work by our artists. We don’t have a retail space but did have a retrospective show at Boston University in 2016.

We have six Walton Ford prints at the Brattleboro (Vermont) Art Museum until February 11—they’re part of a show called Touchstones, Totems, Talismans: Animals in Contemporary Art. If anyone is in New York City, we have a lot of our work with Louise Bourgeois showing at the Museum of Modern Art; the show is called Louise Bourgeois: An Unfolding Portrait and runs through January 28.

NHH: Your press is a gem. Please tell us about it.

PP:  It’s a Le Deuil, a well-known French press. This is an older one, made in the 1850s that was owned by Aldo Crommelynck, one of the greatest printers of all time. He worked with Pablo Picasso, Henri Matisse, Georges Braque, Jasper Johns and Jim Dine, so this press must have good karma. I was very lucky that a printer friend found it and put me in touch with Aldo. 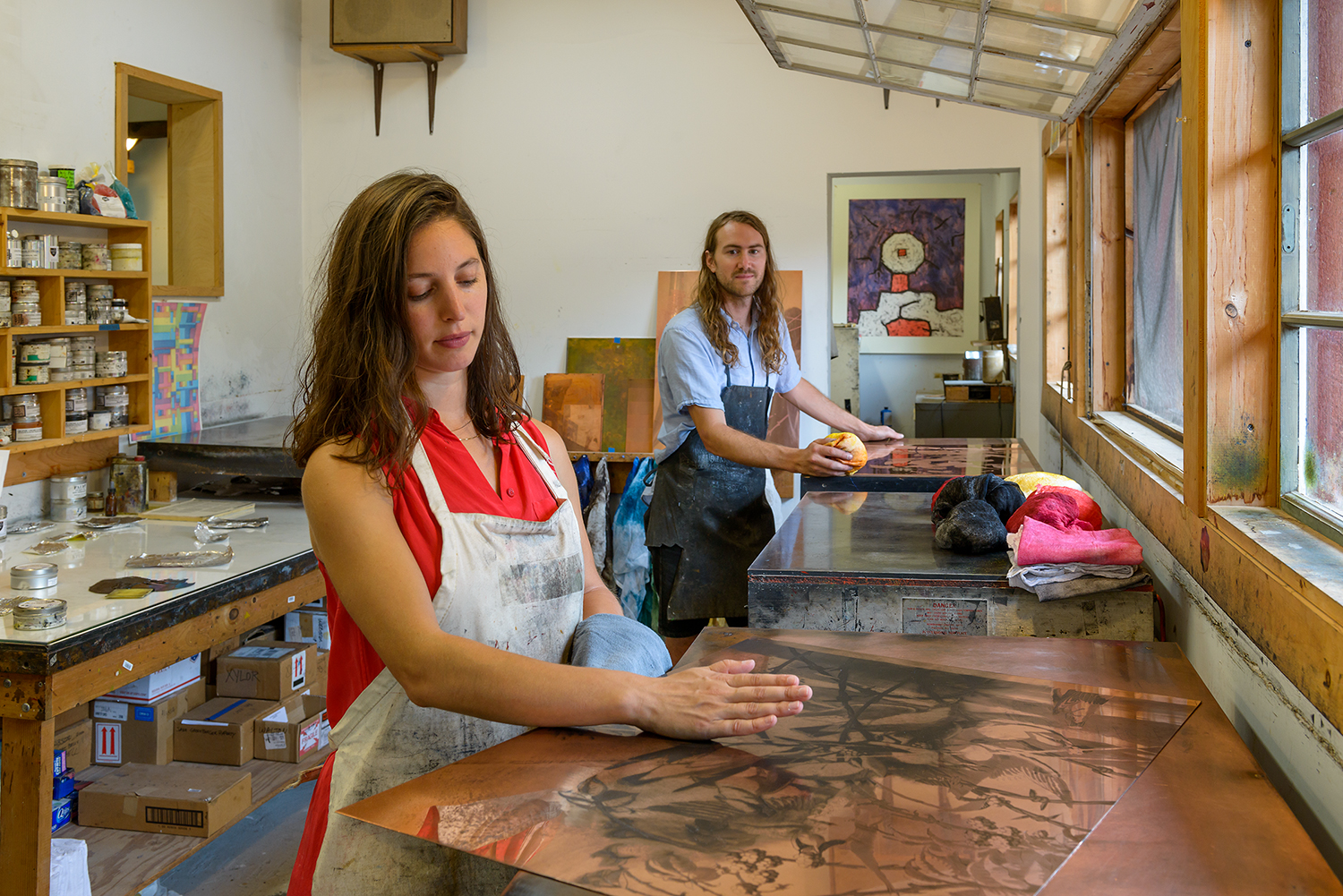