Thanks to some great growers, this beloved and beautiful mainstay of the summer garden is available in thousands of forms, colors and sizes. 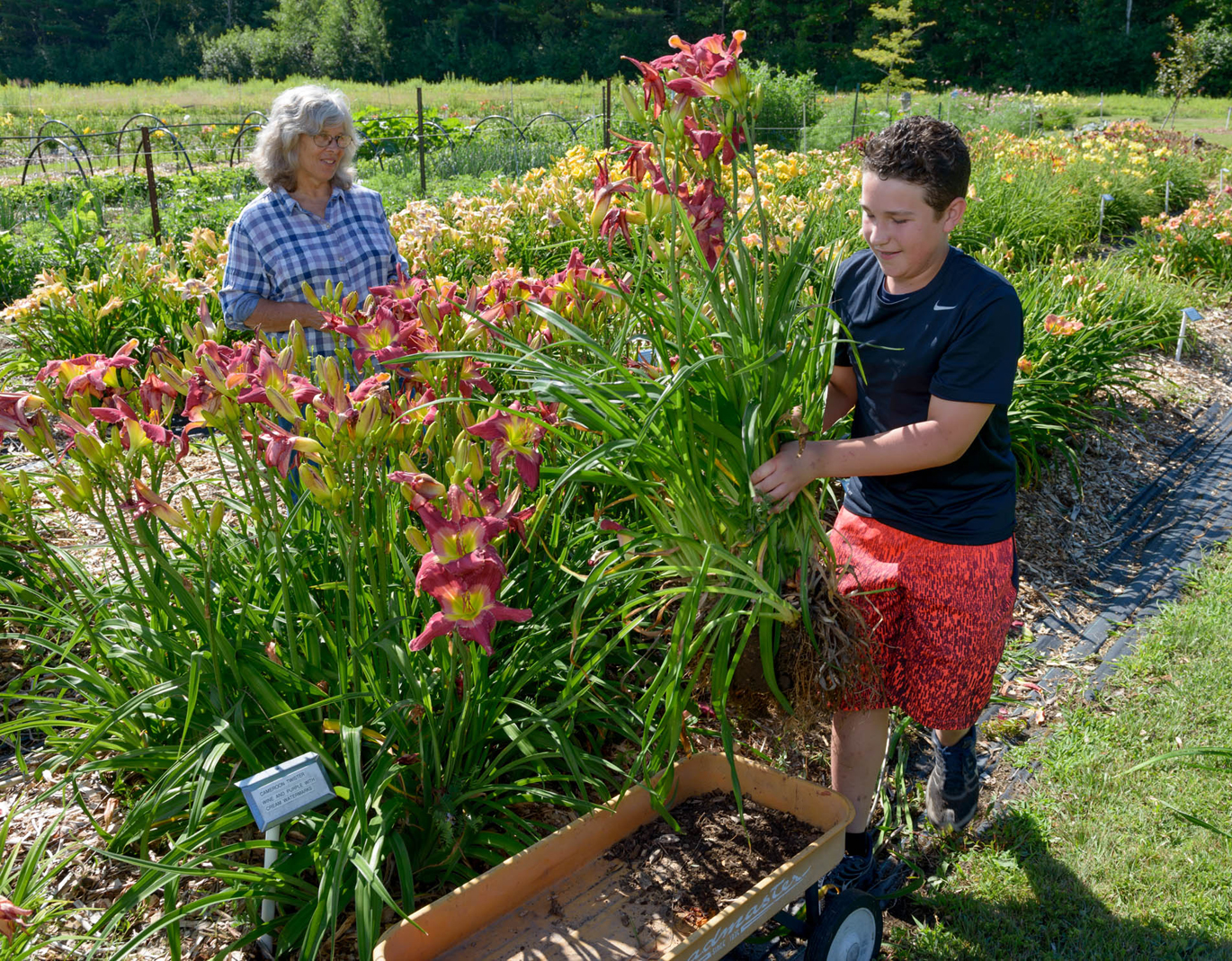 Lisha Kimball, of Milkcan Corner Farm in Webster, and her grandson Ripken Kimball load up the wagon with daylilies they have divided for a customer.

It is not hard to understand why many gardeners have become infatuated with daylilies. These gorgeous plants are sensational performers, asking little and giving lots in return.

Although daylilies are originally from Asia, European gar-deners adored them; and when Europeans sailed to the New
World, their beloved daylilies went too. The plants adapted so well that many people think they are North American natives. Their botanical name—Hemerocallis—means “beauty for a day” because each blossom lasts for only one day.

Fortunately, each stalk—called a scape—has between twelve and fifteen buds or more that open during the next two to six weeks, giving a long season of bloom.

Unlike true lilies, daylilies grow from fleshy roots instead of bulbs, and the clumps daylilies form increase in size each year. There are thousands of daylily cultivars with different flower forms, color patterns, bloom times and sizes. Luckily for New Hampshire gardeners, we have some outstanding daylily growers and hybridizers who have lots to offer.

‘Tasheena Warrior Princess’ (far left)—along with the others on this page—is one of the four hundred registered varieties of daylilies available at Milkcan Corner Farm in Webster; ‘Ocean Rain’ (second from left); ‘Buttered Popcorn’ is a later blooming variety (second from right);  ‘Jean Swan’ (far right).

While in the hospital recovering from surgery in 2005, Lisha Kimball had recurring dreams of a field of lilies. She finally went home in the spring, promising to rest and take it easy, but her garden was calling to her. “It was time to get off the couch and get busy,” says the energetic mother of three and grandmother of six. A lifelong, avid gardener, Kimball remembers selling plants door-to-door at age ten. With the help of her whole family, she now sells four hundred registered varieties of daylilies at Milkcan Corner Farm in Webster as well as has an ever-enlarging vegetable garden and runs a pick-your-own operation of blueberries, raspberries, red and black currants, cherries, kiwis and mulberries.

“Every spring is like Christmas for me, waiting for my lilies to break ground,” Kimball says. “I love it when a customer says they are only going to buy one lily and then they end up choosing ten. Or when a lady driving a small car comes back with a pickup!”
Kimball says daylilies are rugged plants, surviving drought, husbands mowing them down, or being eaten by cows, sheep and deer. “They just keep coming back and multiplying even more,” she says. 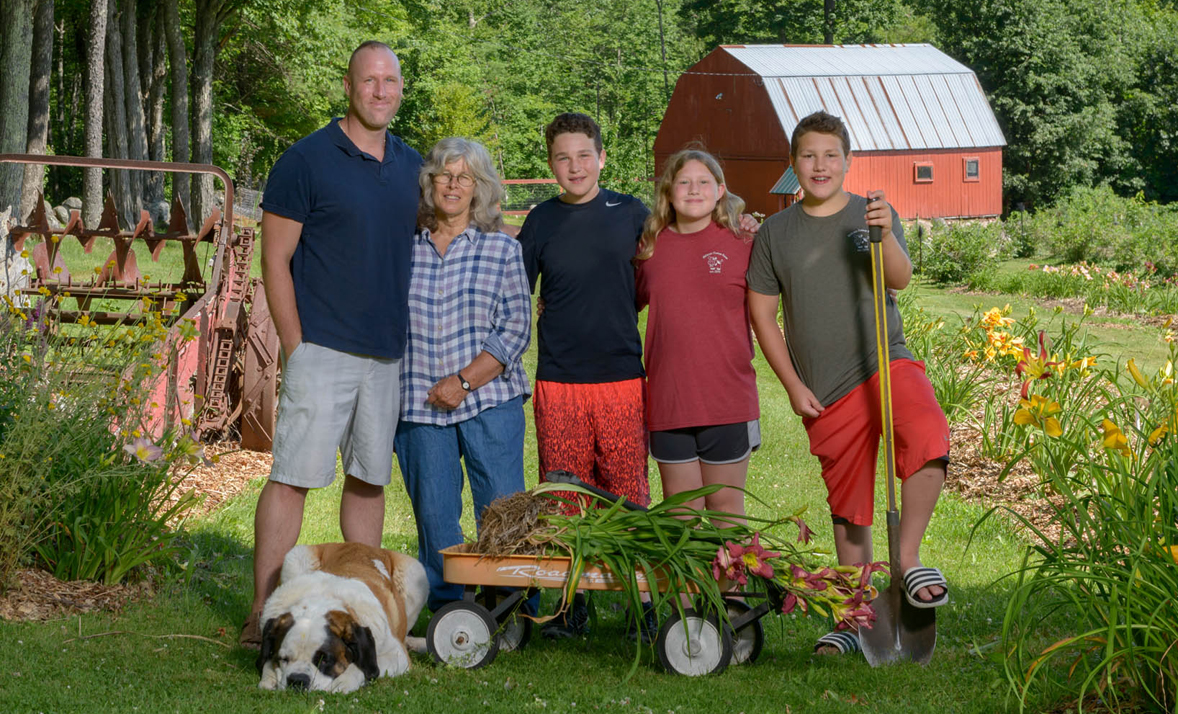 Three generations help out at Milkcan Corner Farm. Lisha Kimball poses proudly with her son Page (left) and her grandchildren Ripken (center), Jade (second from the right) and Pierce, along with the family dog, Judge.

As newlyweds, the Kimballs bought one hundred acres of rough land on Mutton Road in Webster in the 1960s. With the help of her uncle Gair Chase, Kimball and her husband bought their first tractor, spent many years clearing the land, and raised sheep, horses and cows. She is often asked where the name of their farm came from. “Old-timers told me stories of how the corner of our road was the dropping-off place for milk cans from surrounding farms to be picked up for delivery to Concord for processing,” Kimball says. “All those farms are just about gone now but Milkcan Corner Farm is still here.”

While many farms have trouble finding willing workers to help during the busy season, Kimball has a built-in workforce. “The most enjoyment is when my kids and grandchildren come to help me in the field,” she says. “I couldn’t do it without them.” They start working in the spring as soon as the garden thaws, and finish in the fall after seven months of weeding, fertilizing, digging new beds and tending to customers.

“Working together as a family each day has kept us close,” she says. Kimball has been able to share memories of her own childhood, of working in the garden with her father and grandfather when she was a little girl, with her children and grandchildren.
Her infectious enthusiasm for daylilies has spread to the younger generations in her family. “My children and grandchildren have developed the same love for the garden as I have,” she says. “It is a great way of life!”

Carl Harmon grew up in Hudson, where his first full-time summer job—at age thirteen—was working on a farm. After several years in the military, he found himself back in Hudson on a twelve-acre piece of land that he and his wife Marlene, with the help of family and friends, have developed into a thriving daylily operation called Harmon Hill Farm. “I knew I wanted to be a gentleman farmer of some sort someday but just could not figure out what direction to go in,” Carl says. “There were thoughts of a Christmas tree farm; beefalos and even cranberry bogs were considered. The daylilies came about more by accident.”

It all started in 1998 with a visit to Heritage Museums & Gardens in Sandwich, Massachusetts. “This was the first time I had ever seen a mass planting of daylilies or even seen a modern daylily for that matter,” he says. “Our daylily addiction hit hard and fast.”
After noticing the ardent approach that the visitors at Heritage Museums & Gardens displayed in buying non-blooming, cut back, potted daylilies and then seeing the same thing at another nursery a few weeks later, the Harmons felt it was clear there was something to this passion for daylilies. 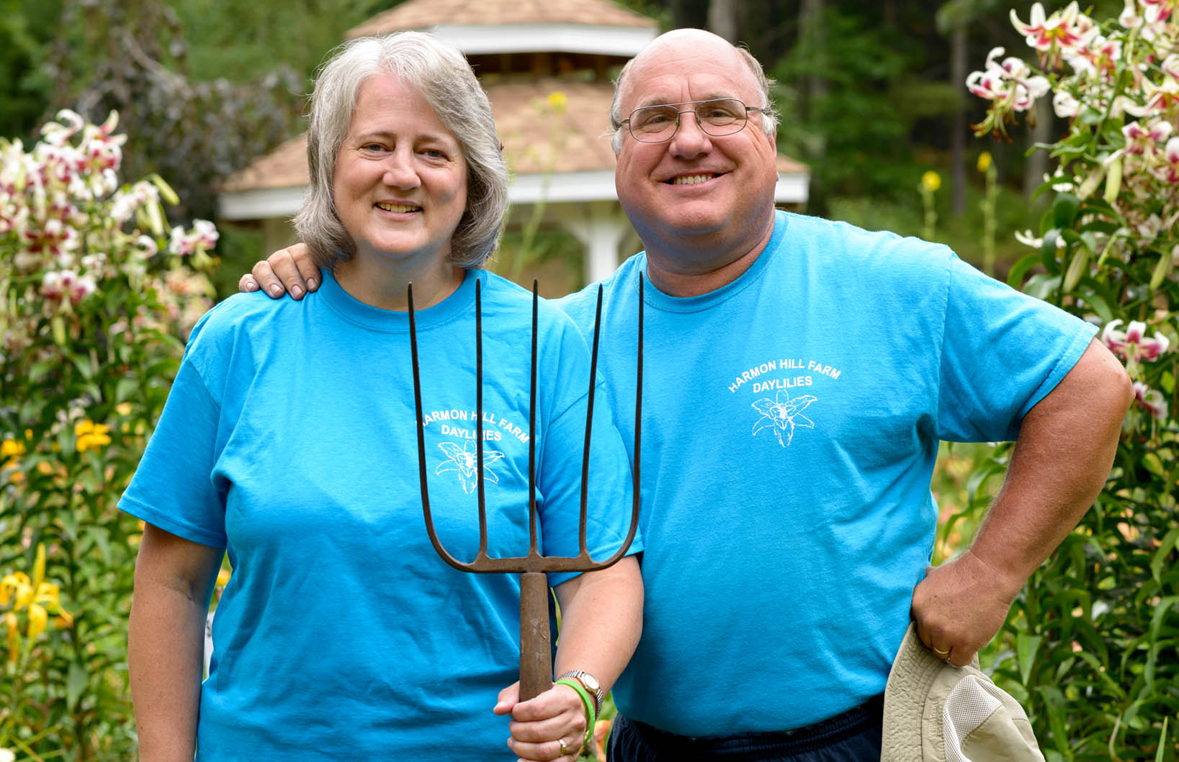 The Harmons do their best American Gothic pose in their garden.

To learn more, they joined the New England Daylily Society and met many like-minded growers who soon became their friends and mentors. Through this group, the Harmons were able to buy and trade high-quality plants. “We very quickly had hundreds and then thousands of named varieties,” Carl says. “After only a few years, we had a surplus of plants and needed to do something with them. So in 2001, we started our first sales bed.”

That fall, a premier grower was closing and offered the Harmons many of his plants. “With no place to plant these hundred or so clumps, it was time to start building what has now turned into our main sales and display area,” Carl says. “A great many of these plants were the forerunners of our sales operation, and many are still strong sellers to this day.”

The Harmons currently grow more than four thousand named varieties of daylilies and have around two thousand varieties out for sale. The Harmons also grow about 1,500 seedlings that hybridizers are evaluating. “We are the garden that first releases or ‘introduces’ new daylily creations to the market for five local hybridizers,” Carl says. The Harmons feel it is part of their mission to display and help distribute the work of these hard-working hybridizers.

(far left) 'King of the Ages;’  (second from left) This is an as yet unregistered tetraploid daylily the Harmons are testing in their garden. It gets high marks for beauty; (second from right) ‘Pink Suede Hues;’ (far right) ‘I’m Gonna Love You Through It.’

Since a large part of their business is online sales, photos of these beautiful blossoms are a must. Marlene handles the computer listings, website creation and management, and photography for their farm business. More than 1,500 of her photos are in the picture gallery section of their website. Her dad was a part-time professional photographer, and Marlene followed in his footsteps. She has won awards in multiple categories at the New England Daylily Society’s annual photo contests, and her photographs have been published in regional, national and international magazines and journals. She will humbly tell folks that her main secret is just taking hundreds—if not thousands—of photos a year.

If you’re looking for a reliable, carefree, beautiful plant to fill your garden with colorful blossoms this summer, look no further than the daylily. As the Harmons say, “Grow them well!” Just beware the spell these flowers cast.
You may become obsessed with them as well. 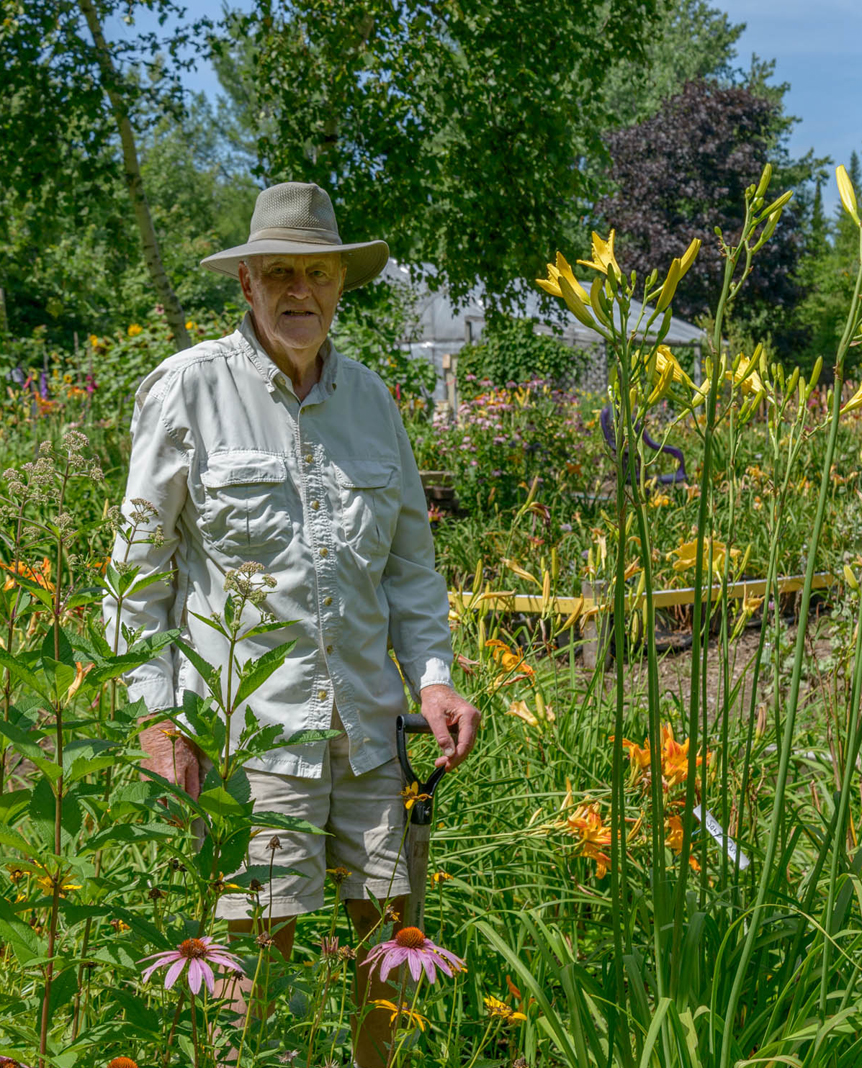 Turner is ready to dig up daylilies for his customers.

For Les Turner, of Merrymeeting Day-lilies in New Durham, it all started innocently enough about forty years ago with two daylily plants he received as gifts. “They became the most dependable, durable and beautiful perennial of many I had tried,” Turner says. “Their fine features quickly took control of my plant preferences, and I started collecting.”

Turner has been offering daylilies for sale since 1992, but has cut back in recent years from more than 700 to around 350 varieties in all colors except blue. Most of his plants are registered hybrids from northern growers and some from Florida that have proven to be hardy in his zone 4 location. To keep his collection current, he adds new introductions every year.

Turner has developed some new hybrids of his own, which he named after family members and bear the prefix ‘Merrymeeting’. These hybrids have proven to be not only beautiful but dependable. “Hybridizing is fascinating and very consuming, but the process is remarkably simple,” Turner says. “Pollen from one daylily is applied to the female part (stigma) of another daylily, the cross is tagged, the seeds collected when ripe and planted. Wait a few years for them to blossom, destroy all but the occasional seedling with the best blossoms and repeat.” In New England, the cycle takes a minimum of three years. Florida-grown plants take only one year to bloom but then must be grown in a cold climate for a few years to test hardiness.

Last summer, Turner tried a new approach and replanted half of his in-ground plants into pots. “Traditionally growers of daylilies sell fresh-dug starter plants as bare root plants that then spend a year rebuilding their strength before blooming again. It is economical but fails to produce a pretty garden quickly. Buying potted, ready-to-bloom plants is more expensive but gives immediate results, especially important to beginning gardeners and professionals who want flowers now,” he says.

Turner is a huge supporter of local causes, contributing daylilies to the Girl Scouts, New Durham Public Library, local churches and garden clubs. In 2015, he offered the local Girl Scouts all the daylilies they could sell at no cost to them. “They sold almost five hundred daylilies, raising $2,400 for their travel and special events,” he says proudly.

Turner grows on a challenging site: a former gravel pit. He has built up the soil by composting over the thirty years he has lived there. “I grow atop gravel by cooperating with Mother Nature. I collected tons of leaves and composted leaves from our town landfill, allowed time for Mother Nature to do her thing and there you have it: a rich few inches of soil growing atop what the glacier left behind a gazillion years ago,” he says.

(far left) Les Turner’s Merrymeeting Daylilies in New Durham includes 350 varieties, such as ‘Zelazny’;  (second from left) ‘Fooled Me’;  (middle) ‘Out East’; (second from right) ‘Merrymeeting Mystery’ is a name Turner gives to a plant if he is unsure of its registered name. Often he gives them away as a bonus; (far right) ‘Highland Lord’.
Categories: Gardening & Landscape