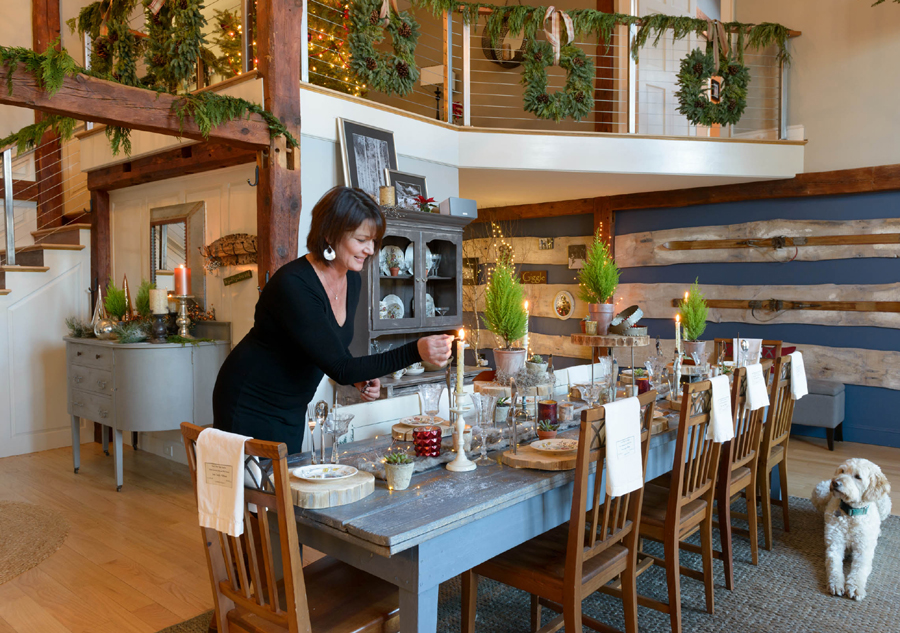 Homeowner Jaye Carr added finishing touches to her holiday table while her Goldendoodle, Teagan, watched. Carr and Renee Carman of Mandeville Canyon Designs in Exeter decorated the home, a renovated dairy barn, which was featured on the Exeter Holiday House Tour last year.

’Tis the season for decorating, and one of the most enjoyable ways to get ideas is spending an afternoon exploring holiday house tours. Participating homeowners take great pride in decking their halls, from festively festooned mantels and perfectly placed wreathes to twinkling lights and creatively decorated trees.

Hopefully, a few of these homeowners’ ideas will spark your creativity this season.

Let the house be your guide

Renee Carman of Mandeville Canyon Designs in Exeter worked closely with homeowner Jaye Carr to create a rustic, but sophisticated, holiday theme in the Carr home, a former dairy barn.

Carman was inspired by the Carrs’ laid-back style as well as their home’s pastoral setting. “The house directed us,” Carman says (she was the designer for the home’s 2015 renovation). Natural wood throughout the house—from existing beams to live-edge planks on the walls, and reclaimed wood in the kitchen and door trim—helped inform decorating choices.

For the tour, Carman took over a corner of the living room, creating a woodland dining scene that captivated visitors. She constructed a pergola of birch tree limbs, draping it in fir boughs, with twinkling lights and glass balls with candles. Tree stumps from the Carrs’ back yard, trimmed by Sharps Lumber of Holderness, served as seating around a whimsical table decked with moss, poinsettias and pinecones. Gossamer fabric on the floor, covered with faux snow, set off the scene.

Nancy Godbout of Jacques Flower Shop in Manchester was the designer on the Reichheld home, located in Manchester’s historic North End.

As an English Tudor-style home that’s a well-loved neighborhood landmark, the home’s classic style lent itself to festive decorations, inside and out. While staying true to the period of the home, Godbout added new materials and color for a contemporary touch as well as incorporated many of the homeowners’ holiday decorations when possible, including a crèche scene in the formal dining room. Using fresh greenery, lights, decorations and ribbon, she introduced lime green accents to the traditional living room. “Lime is trendy, but it fit the room,” Godbout says.

Plants and greenery—live as well as permanent botanicals—make everything festive. Godbout used both throughout the Reichheld home. To anchor their large living room, Godbout made the fireplace a focal point by filling it with cream-colored poinsettias, peace lilies, ferns, ivy and holly plants. Pine garlands with lights were draped along the mantel. Additional lights and large glass cylinders containing white pillar candles added life and movement. Topiaries with lime green and red accents, and crystal and gold decorations, were placed at either end of the living room. A centerpiece of green hydrangea and white roses graced the coffee table.

Godbout used poinsettias and other plants to introduce color to the dining areas. “Poinsettias today come in different colors and fit in anywhere,” she says. 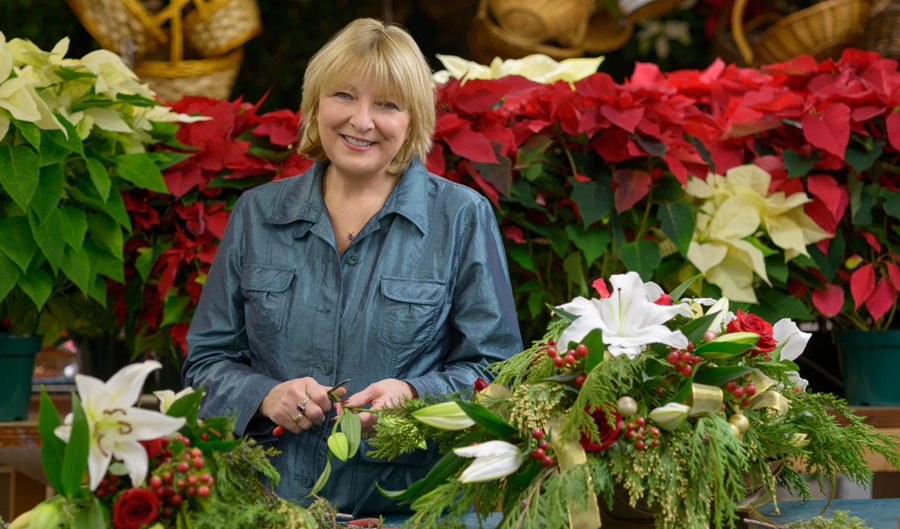 The Reichheld home in Manchester was decorated by Nancy Godbout of Jacques Flower Shop, also in Manchester, and featured on The Palace Theatre Holiday House Tour last year.

The informal dining room was decked with festive red poinsettias as well as red and green plaid ribbon. A chandelier over the table was draped in greenery and hung with shiny red ornaments. Godbout used cream and green accents in the formal dining room, as well as tulips—homeowner Deb Reichheld’s favorite flower—to create a vignette on a side table in shades of pink.

Elements from nature were used throughout the living areas of the Carr home. Two four-foot-wide wreaths with remote-controlled candles hung high above the living room. A whole birch tree—cut from a neighbor’s yard and almost two-thirds the size of the highceilinged family room—was placed near the fireplace and hung with glass balls. The long, salvaged-wood dining table was set with rustic chargers made from cut pieces of cedar with holes drilled to hold silverware.

Lemon cypress trees placed along the table added a touch of green as well as a fresh lemon scent. “The table invoked all the senses: smell, sight, taste, touch,” Carman says.

Fresh balsam wreaths were hung along the open stairway leading to a second-floor landing. 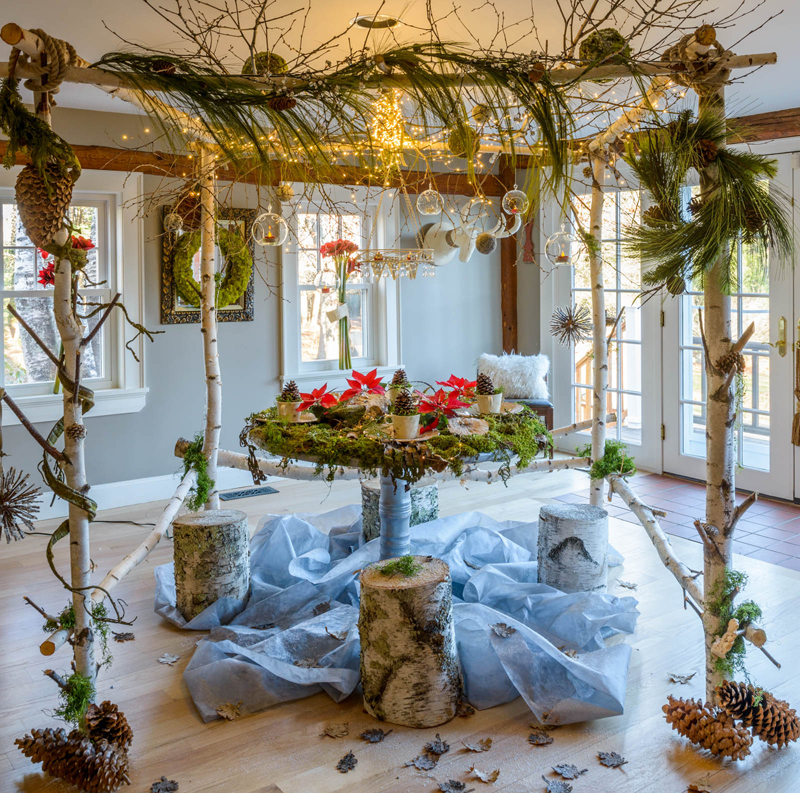 Renee Carman created a whimsical woodland scene in a corner of the Carrs’ living room. The pergola was made from live birch trees and pine boughs. Live poinsettias added color to the natural setting.

Carman and Godbout both used lights extensively in their holiday decorations.

In the Carr home, Carman mixed votives and tapers, and wove twinkling lights along the dining table.

The holidays are the perfect time to incorporate your favorite decorations, accessories and heirloom pieces, whether it’s fine crystal, your grandmother’s china or the silver candlesticks you haven’t used in years.

And, as Carman recommends, let the house speak for itself. “Sometimes it has a lot to say,” she says. “Be the cheerleader to give it a voice.” 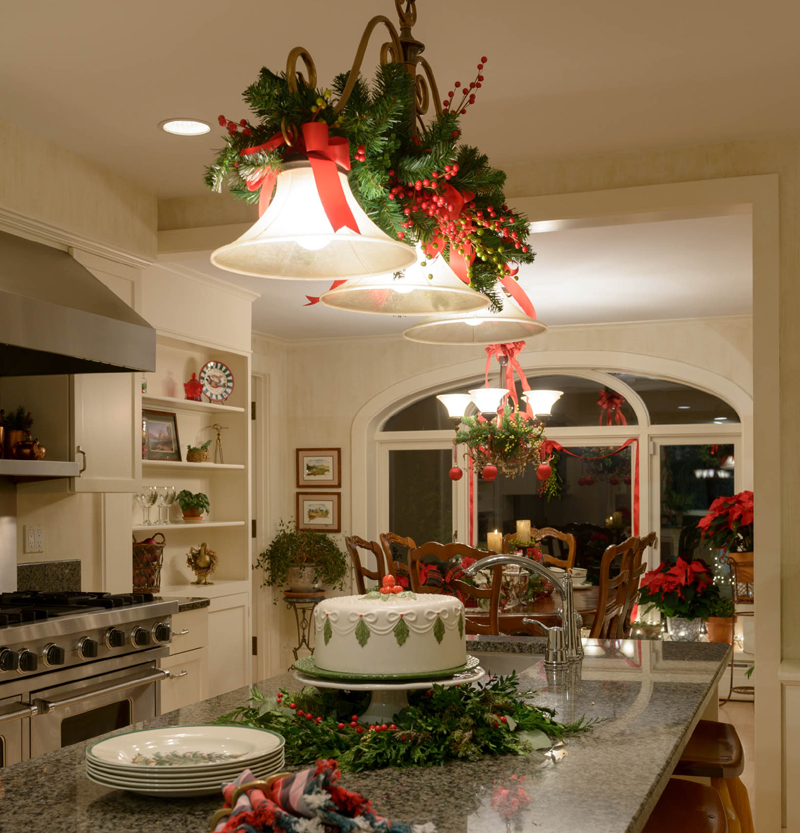 Holiday greenery, including red berries and pinecones, added cheer in the Reichheld kitchen. 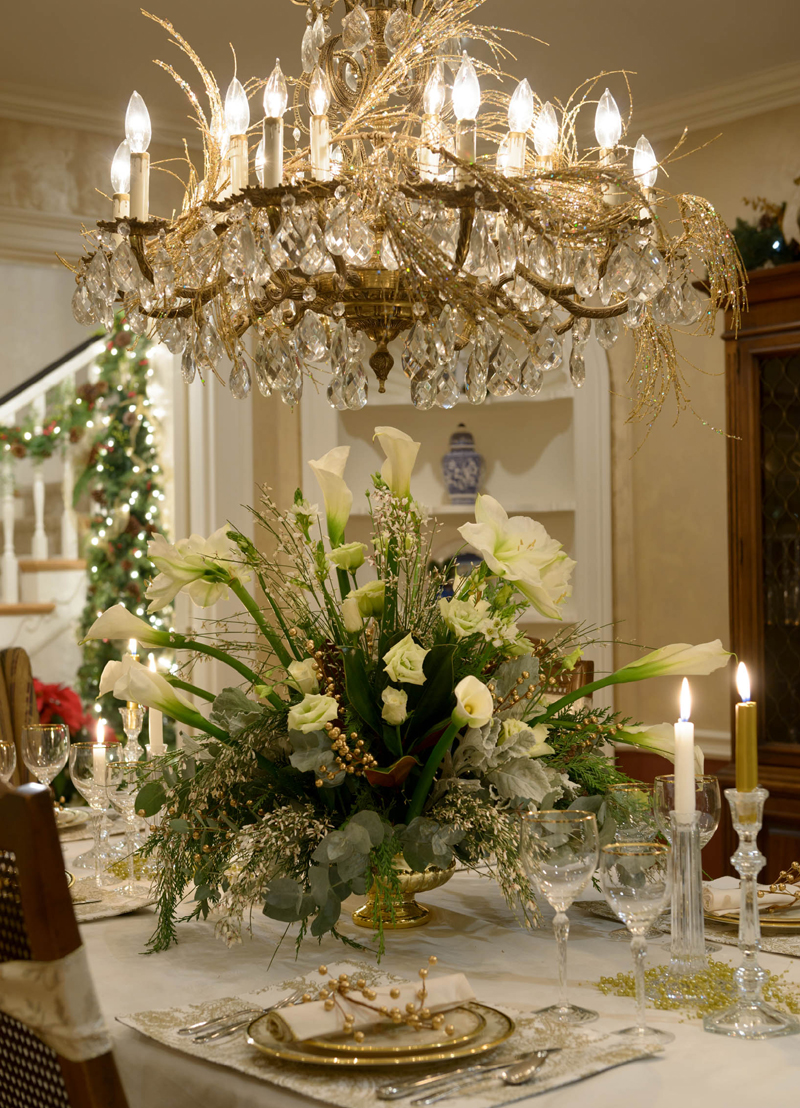 The dining room chandelier at the Reichheld home was decorated with pine boughs dipped in silver, platinum and gold. The resplendent floral arrangement on the table included white calla lilies and roses. 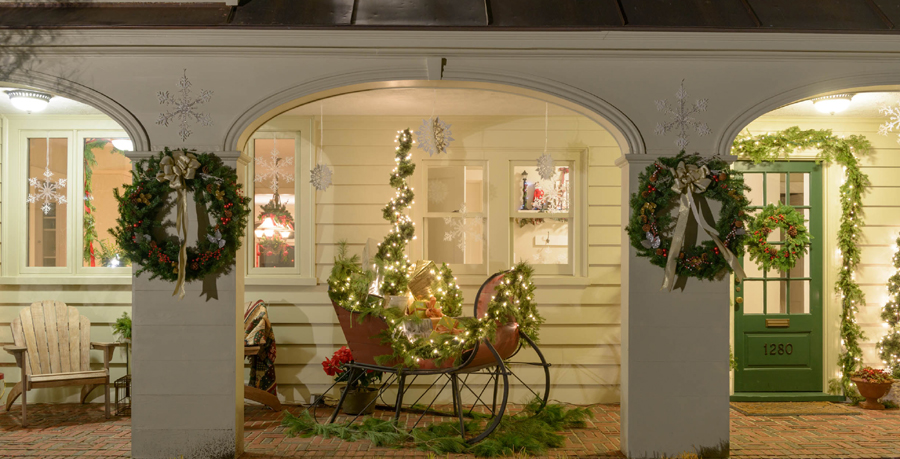 A red sleigh, decked out in holiday greenery and lights, lit up a side porch.
Categories: Architecture and Interiors, Artwork and Design