Deep Roots in the Granite State

A Chicago-based family returns to Peterborough to build a home reminiscent of the one the husband’s family has enjoyed nearby for more than two hundred years. 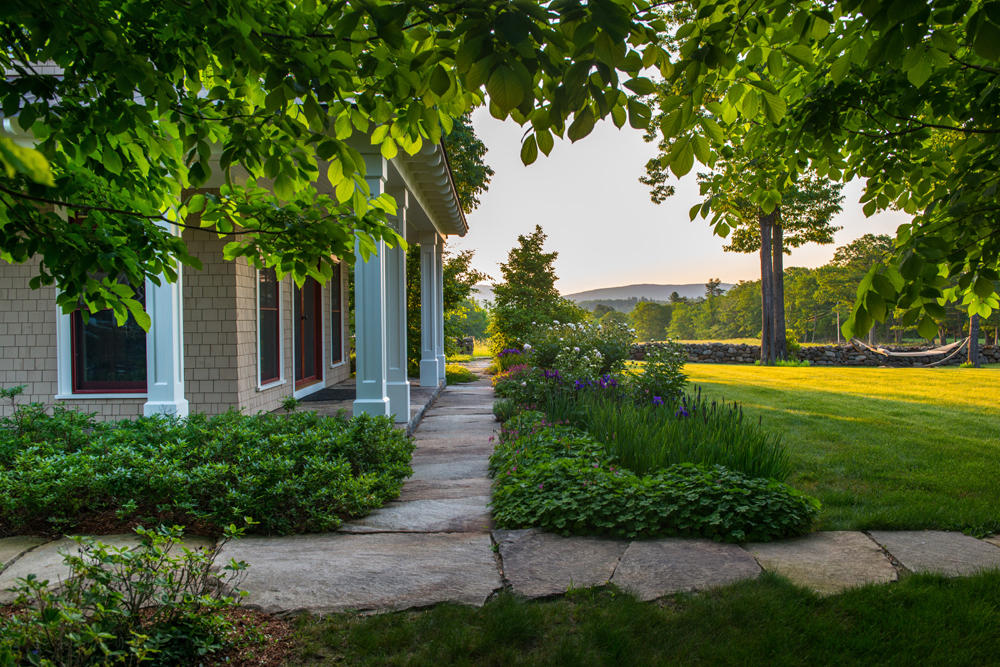 “There was a gravitational pull,” Mike Morison says, a pull to move back to New Hampshire, to Peterborough, to roots.

The Morison family’s roots in Peterborough go way back, all the way to 1739. That’s when Mike’s great-great-great-great-great-grandfather Thomas Morison put down stakes there. He was the first permanent settler of the town, helping to incorporate it in 1760. In 1791, Thomas’ son Robert built a home that would become known as Terrace Hill Farm. More than two centuries and all those generations later, the home is still in the family. Mike spent much of his childhood at Terrace Hill; his twin brother and family live there now.

For years, Mike, Gloria and their three children would travel from their home in Chicago to spend summer vacations and holidays at Terrace Hill. Over time, warm memories of gatherings with the extended family accumulated, as did their appreciation for the history that was tied to the house. “We all knew it was a very special place,” Mike says.

Mike and Gloria decided to leave Chicago and build a “comfortable farmhouse” in Peterborough, just around the bend and up the hill a bit from the old homestead. They bought fifty-four acres of pine forests, stone walls and hayfields with distant mountain views, and began to plan how to best use them. One thing was certain—there were aspects of Terrace Hill that Mike and Gloria loved and wanted to replicate.

Every room has a connection to the outdoors, facilitated by the many windows and doors. In the living room, there are floor-to-ceiling windows with clerestory lights, and doors to a screened porch on one side and a patio on the other.

On their list, a red barn. It’s the first thing that you see, sitting atop a rise in the land that borders the driveway. “I was very fond of the barn at Terrace Hill,” Mike says. “I wanted to build one that was equally as special.” White pines were cleared to make room on the lot, milled nearby and used to build the timber-frame barn. “It was just as my ancestors had done,” Mike says.

Also on the list of wants, a sleeping porch like the one at Terrace Hill. “It was the best place to sleep in the summertime,” Gloria says. “It has windows on three sides, a wonderful breeze blowing through and a view of the moon. Our kids loved that room.”

They also wanted a formal dining room like the one that hosted so many memorable holiday dinners. But Mike and Gloria wanted the living space to be informal, where they could relax with family and friends, and not worry if something was spilled.

Architect Sheldon Pennoyer—of Sheldon Pennoyer Architects, PLLC, in Concord, who, along with the firm’s Renee Fair and David O’Neil, designed the house—points out what he calls “a constant dichotomy between formal and informal.” For instance, he says, from the front entrance “you bypass the stair to the right, and there is the very formal dining room. But to the left of the stair, you go by the kitchen into the main living space. You can experience an old-fashioned dinner, and then go into the living room and come back to the twenty-first century. I found that intriguing—the constant back and forth.”

The formal dining room (right) contrasts with the informality of the living room (left), with its sectional sofa and oversized leather ottoman.

Pennoyer describes the house—which was built by Timothy Groesbeck, of Groesbeck Construction in Peterborough—as representing the New England vernacular, with a certain modern interpretation. Part of that interpretation is the “connector,” an eighteen-foot-long, two-story, windowed breezeway that Pennoyer says provides “a way to transition from one volume to the other. It’s not a space where you sit down. You can pause and look out, but you don’t stop and occupy.” The main house is at one end, and at the other end, the sleeping porch, a guest suite and Mike’s office.

The location of the office gives Mike a quiet space away from the daily goings-on. “It’s a place where I tuck away in the morning when I typically do my work,” he says. His desk sits in front of an expanse of windows that face the east so he can see the sun rise.

The cherrywood desk and chair are works of art, created with only hand tools by Charles Shackleton, of Shackleton Thomas in Bridgewater, Vermont. The complementary wainscoting and bookshelves, also cherry, were built by Woody Huntington, of D.S. Huntington Company, LLC in Peterborough.

The same elegant woodworking continues in the living room, with the box beams, fireplace mantel and surrounding cabinetry. In front of the fireplace is a comfortable, sectional sofa in an updated, patterned chenille in a warm neutral, with pops of red in the throw pillows.

Steve Karp—a senior designer at Bentwood of Chicago, in Chicago—chose the color palette, which repeats throughout the house. “All the colors reflect the beautiful colors of nature provided by the picturesque landscape,” Steve says. Steve partnered with Stephanie Karp in the selection of the furniture, which also includes a tufted, oversized leather ottoman; a patterned accent chair; and gaming chairs with nail-head trim that surround a table in a sitting bay in the living room.

The probability of frequent entertaining influenced the design of the kitchen. Two parallel islands provide separate work areas, as well as a place for serving a buffet
or socializing.

Steve played a key role in the design of the updated traditional kitchen, which adjoins the living room. “The kitchen is viewed as a hub for activity and family gatherings,” he says. To accommodate that, he designed a large functional space with two, parallel granite-topped islands, each with a sink, dishwasher and garbage disposal.

“The kitchen was definitely designed around entertaining, for groups large and small,” Gloria says. “We’ve had as many as sixty or seventy people here.”

Having two islands means the cooking and cleaning up can be done at one, while leaving the other for serving a buffet or socializing.

A sense of space in the kitchen is enhanced by living room’s numerous floor-to-ceiling windows with clerestory lights, which allow views of the gardens and the vista beyond.

Connection to the outside

“If you look at the outdoor spaces,” Pennoyer says, “every room has a connection to that outdoor space.” The living room has doors that lead out to a screened porch on one side and a patio on the other; the dining room, to a terrace and garden with trees that separate the house from the barn.

That separation is created by an allée of Yellowwood trees, with massive granite boulder benches at either end. This is part of what Brian Bare—of Shepard Butler Landscape Architecture, Inc. in Thetford Center, Vermont—calls the South Garden: “The tree and path alignment in the South Garden take on a more formal, yet playful approach, playing off the agrarian history of the site.”

Also part of the South Garden are a formal lawn and perennial gardens, bordered by a stone pathway made of a granite that Shepard Butler Landscape Architecture, Inc. discovered in a northern Maine quarry. “The stone was a perfect marriage with the existing stone walls,” Bare says.

The ancient stone of the old farm walls had been in disrepair, described as a pile of rocks. These were reconstructed by Deb Shelley, of Shelley Land- scaping & Masonry in Jaffrey, who also created the pathways and a stone shed. Two of the walls now help frame the North Play Lawn, which Bare describes as “an expansive, rolling, mown lawn for the family’s outdoor recreation with dramatic views of the adjacent hayfields and nearby mountains.”

Connecting the north and south lawns is the East Woodland Garden, an ephemeral garden with native woodland trees and flowering plants.

On the roof of the house are solar panels that are part of the plan for energy efficiency. The home also uses geothermal heat pumps. The house itself is, as Pennoyer says, “encased in an aggressive building envelope. It has an exterior two-inch foam layer on a seven-inch-thick wall that’s filled with cellulose insulation. More solar panels are planned for the future to further reduce the family’s carbon footprint.

The future was also on Mike and Gloria’s minds when they included the concept of aging in place in the design of the house. “We wanted a place where we could retire and stay forever,” Gloria says.

There are door openings that are compliant with the Americans with Disabilities Act, places to add grab bars and even a pre-built shaft for an elevator to provide easy access to their second-floor bedroom; the space is now used as storage closets.

Outside, there are plans to add to Mike’s vegetable garden, and to plant an apple orchard and berry patch. “We’re working on de-stoning some of the fields that we cleared and making sure the soil pH is right,” Mike says.

Also in the planning—a paddock. One of their daughters had been the first to talk about moving from Chicago so she could have a horse. That will come in time, Mike says. For now, though, “Being in the place we built and being in the community again, we’re in a very comfortable spot.”

Left: Irregular granite stones that form the pathways were found in a northern Maine quarry. The quarry stone complements the ancient stone of the old farm walls that borderthe house.

Right: Described as “a pile of rocks” at the time the Morisons bought the property, the stone walls were expertly reconstructed by Shelley Landscaping & Masonry in Jaffrey.

Left: One of the Morison family’s favorite spots to gather, the screened porch has both views of the mountains and the benefit of breezes that sweep across the open fields. A cozy fireplace offers warmth on chilly nights.

Right: The house, said to represent the New England vernacular with some modern interpretations, occupies the landscape as if the building had long been there.

Right:The red timber-frame barn was the first structure built after the property was cleared of a stand of white pines. The trees, milled nearby, were used for its construction.