With the help of architect Christopher Briley, a couple designed a passive solar home that reflects their aesthetics and meets their family’s needs. 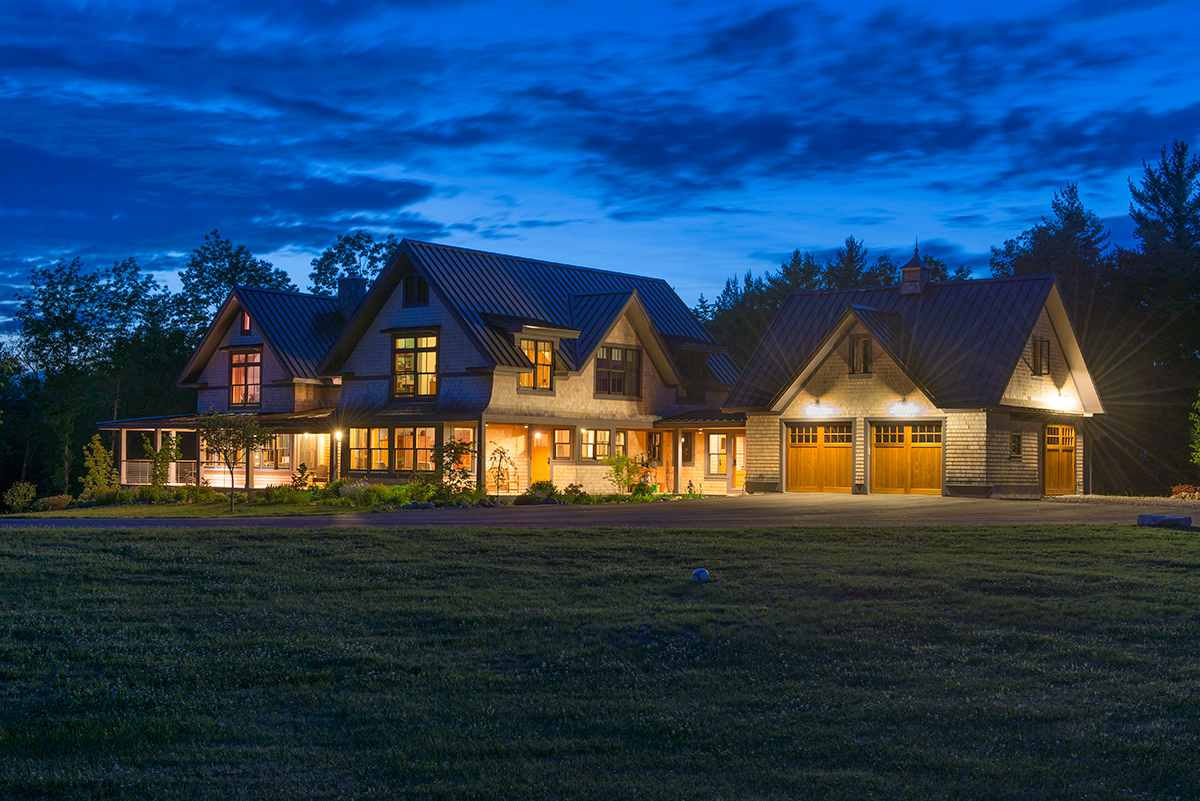 When it comes to designing homes, architect Christopher Briley of Briburn LLC in Portland, Maine, equates the process to “an artist looking at a canvas.” “The house needs to be balanced from the outside,” he says. “That tells the story of how the house is spaced.” His vision is shared by his client and friend, homeowner Kristina Parisien: “This is a perfectly symmetrical design. It just looks right, natural.”

It wasn’t their first home, so calling it a “starter home” isn’t quite right. But the home that Robert and Kristina Parisien built in Maine in 2007 with architect Christopher Briley, of Briburn LLC in Portland, Maine, surely became the basis for the energy-efficient, eco-friendly home the Parisiens built near Concord a few years later.

“After we lived in the Maine house for about two years, we came to the decision that we, as a family, needed to move for our careers,” Kris says (she and her husband are physicians with three young children). “When we called Chris to tell him the house was on the market, he was disappointed.”

“That house was my baby,” Briley confirms. “But when Kris continued and asked if we’d work on their new house to build on the green aspects we used in Maine, that made it all the better.”

About two years after breaking the news of their move, the Parisien family settled in to their new home of four thousand square feet of super-insulated, energy-efficient family living space that uses zero petrofuels.

Working with the sun

To build the earth-friendly home Kris and Rob wanted, they knew they’d need the right site: specifically, it had to be large enough to accommodate a south-facing building that could be designed to capture the power of the sun. The Parisiens looked at several options, but when they happened upon a thirty-acre lot near Concord that was situated up on a hill, they knew they found the spot.

When building their natural/Arts and Crafts-style home, Kris and Rob thought a lot about how their family lives. “We looked at a number of newer houses on the market,” Rob says. “So many new houses are just mass reproductions that look good superficially but do not quite work as a place to really live.”

Instead, the Parisien home is designed to follow the natural rhythms of life. “To find the soul of a home is to ask how you live,” Kris says, “and that’s what we did. There is something amazingly simple in the foundation of our home and following the movement of the sun. When we wake up, we go to the kitchen that is located on the eastern side of the house. In the evenings, we find ourselves on the western side of the house, watching the setting sun in the family room, gathered together in front of the hearth. People having been moving with the rhythm of light for thousands of years, and I submit that following this cycle is a need that we all have.”

Briley’s design called for a large mudroom that opens to a large kitchen space with a small table tucked by the window and main door, and with a smaller living area located in front of the kitchen. The dining area connects the kitchen wing with the living wing, where’s there’s a family room, a small office for Rob and a painting area for Kris.

The home has many large windows to the south and fewer smaller ones on the north side. Plus, the south side of the house has a porch that does double-duty. In addition to being an extension of the home and bringing in some shade, the porch is designed to work with the sun. Briley added cutouts in the porch roof to capture the sun’s rays but angled the design to let in the warm winter sun (which is lower in the sky) while blocking the hot penetrating summer sun (which is higher in the sky).

“This is the real trick to having a passive solar house,” Briley says. “When you’re letting the warmth of the sun in, you need a thermal mass to collect and store that heat. Half of the floors on the main floor consist of a concrete slab-on-grade topped with slate tile. This dense slab stores the heat from the sun. So even after the sun sets, it takes a long time for the house to cool down. Likewise, in the summer, when the afternoon sun comes streaming in, the slab keeps the house from overheating. It basically works to keep the temperatures even throughout a twenty-four-hour cycle.”

When additional warming or cooling is needed beyond what the sun can provide, the Parisiens have a geothermal system and a Rumford Renaissance fireplace that ultimately warms the entire house. (A Rumford-design fireplace allows for a much cleaner burn, similar to the design of a woodstove where more wood burns in the firebox and contributes to useful heat, rather than exiting the chimney as particulate emissions. The Parisiens say they generally use only ten pieces of wood during a daylong burn in the fireplace.) This particular fireplace also features an exterior air kit for cleanliness and efficiency within such a tightly insulated house, which otherwise would prohibit a good draft from taking hold in the flue.

For the Parisian’s New Hampshire home, Briley and Kris decided to use SIPs. Structural insulated panels (SIPs) are a high-performance building system. Each panel consists of an insulating foam core that’s sandwiched between two layers of sheathing. A SIP system is extremely strong and energy efficient.

“The result,” Briley says, “is R-40 walls that are very air-tight.” (The R-value measures the thermal resistance of a material to heat transfer. R-values are used to rate insulation products; the higher the R-value, the greater the insulation’s effectiveness. A typical two-by-six-inch fiberglass insulated wall has an R-value of R-21.)

Although the home’s tight envelope allows for energy savings, it also requires attention be paid to air quality. That’s why Briley included an energy recovery ventilator (ERV) in his plans.

“We needed to make sure there is always an ample supply of fresh air,” Briley says. “The ERV tempers incoming fresh air with outgoing exhaust air without any cross-contamination.” An ERV also decreases humidity and the likelihood that mold will develop.

The ERV was important to Kris. “When I was practicing as a primary care physician,” she says, “I would see people coming in a year after they moved into new construction with worsening asthma or allergies. I wondered if it wasn’t related to the fact that they weren’t getting enough of the air exchanged from inside their house.”  (Kris’s hypothesis is supported by the Environmental Protection Agency, which has written about “sick building syndrome.”)

Another lesson the Parisiens brought from their starter home concerned energy technology. At first, the Parisiens considered solar power for additional heating and hot water needs in their New Hampshire home. But with so much emphasis on other green techniques (building orientation, the geothermal well and the tight envelope), solar wouldn’t have added enough additional energy savings to be cost-effective. However, the home is wired for solar panel installation so that as the technology costs come down, the panels can be added at a later date.

Briley strongly recommends that his clients do this type of research and evaluation. “There are tons of options that might be right for your house,” he says, “but they might not be. I tell my clients: First work with the sun. Then, do a good job sealing the house. Then add one other thing—and invest in that system. For Kris and Rob, it was the geothermal system. They made that one system power as much of the house as possible.” And their dedication to geothermal made it less necessary  to also invest in solar.

Even with a strong emphasis on green living, the Parisiens are most certainly practical people. With three young children and two thriving, busy medical careers, modern conveniences couldn’t be overlooked.

That’s why in the kitchen, Kris and Sue Booth, owner of Vintage Kitchens in Concord, worked to create a space that melds with the rest of the house but doesn’t skimp on the necessities a young family needs. Sue developed a galley design with a twelve-foot island that separates the kitchen from adjoining living space. Behind the kitchen space is a hallway that provides ample storage, a wall for the separate refrigerator and freezer, and smooth traffic flow from the mudroom to the living area.

“I love that when I’m in the kitchen, there’s living space right in front of me,” Kris says. “When I’m trying to get three kids to school in the morning, there’s a command center that I can work from.”

Sue’s philosophy for kitchen design is that as the designer, “you have to keep the client’s vision for their home in practice and in aesthetic. A kitchen shouldn’t stick out or be radically different from the rest of the house.” To achieve that here, Sue took existing architectural details and gave them a slight twist for the kitchen. For example, where the wood grain lines are horizontal in the rest of the house, they’re vertical in the kitchen. “The goal is to keep the consistency of the theme,” Sue says, “but not make it boring—to give it a little twist.”

The Parisiens, Sue and Briley talked a lot about the design of Greene and Greene. Charles and Henry Greene are considered to have brought high-art aesthetics and fine craftsmanship to the Arts and Crafts Movement in the early twentieth century. The brothers were recognized by the American Institute of Architects in 1952 for their contribution to a “new and native architecture” and are often credited with encouraging buildings and their furnishings to be considered artistic craft. 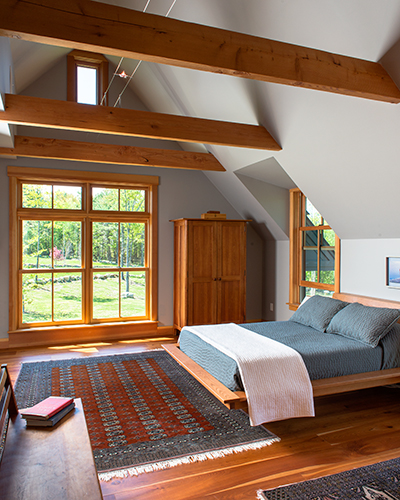 All of the wood in the Parisiens’ home—including that seen here in the master bedroom—is treated with tung oil, rather than stained with polyurethane, similar to what was done in the old Arts and Crafts homes.

In the Parisien home, Greene and Greene elements are found in the beautiful finger joints in the stairs; the pulls in the kitchen, which were handmade by Vintage Custom Cabinetry in Concord—a custom woodworking shop owned by Steve Booth, Sue’s husband; simply designed and natural cherry cabinets; and the copper trim and bands around the fireplace. Except for the kitchen cabinets, all the floors and trim in the house are finished with tung oil, rather than stained with polyurethane, similar to what was done in the old Arts and Crafts homes.

Kris points out the symmetry in Briley’s work and the way he uses windows in unexpected places to let the light in. For example, upstairs in the hallway that connects the master suite with the children’s rooms on the other side of the house, there are three windows placed just above the floor.

“With SIPs,” Briley says, “you can start and stop a wall pretty much anywhere you want from a construction standpoint. And the resulting vaulted ceilings and half-story upstairs make for interesting spaces while reducing the volume of space that needs to be heated. Adding those windows tells a story of the house. It’s like an artist looking at a canvas—we needed the windows to balance the house.”

Kris, who is an artist in her spare time, understands Briley’s approach. “You have to build from the outside,” she says. “It’s a perfectly symmetrical design. It just looks right, natural.”

Which is just the way living should be.