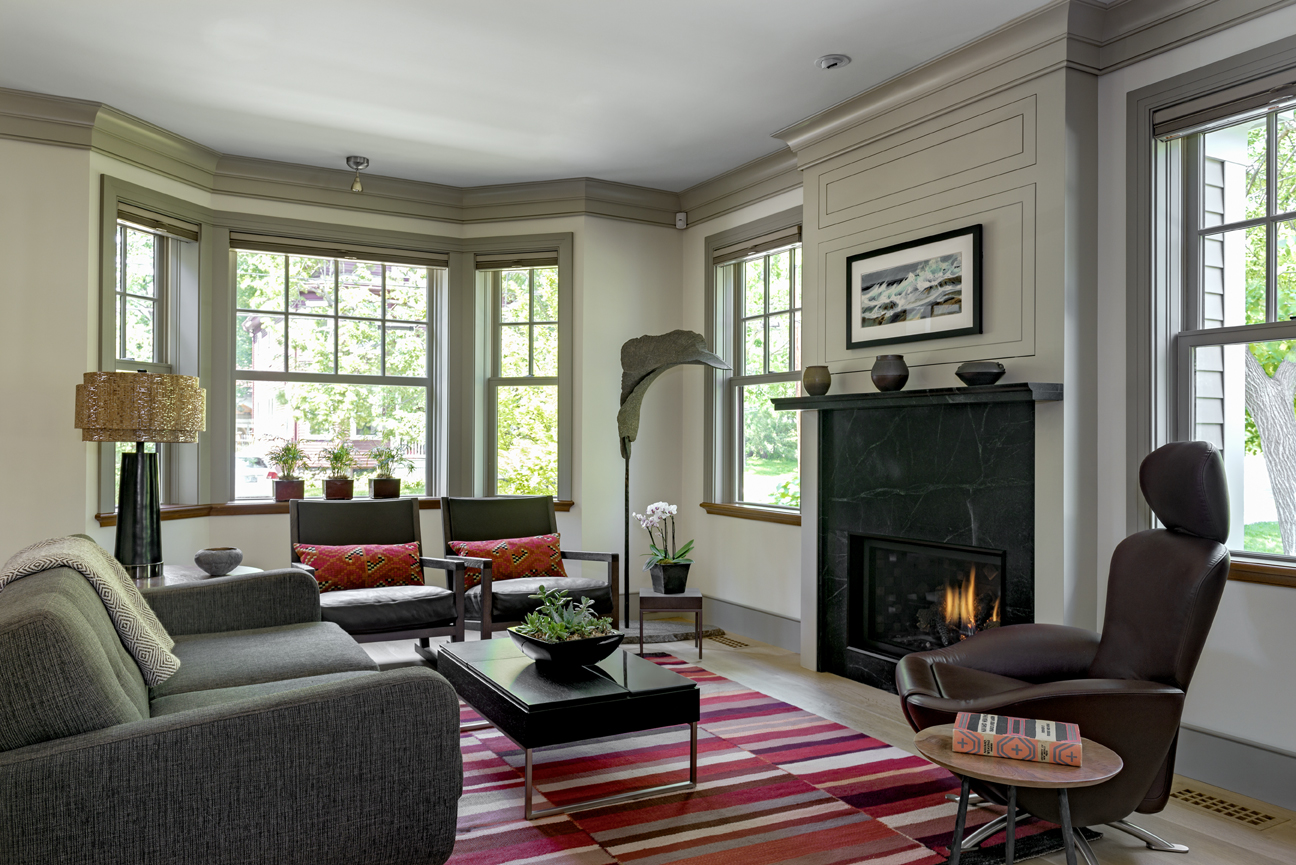 The living room reflects the couple’s love of mixing contemporary and traditional styles. The panel over the fireplace mantel hides a television. The granite sculpture to left of
the fireplace is by New Hampshire artist Gary Haven Smith.

Janet Prince knew her Portsmouth home had potential when she first saw it. That potential, how- ever, was obscured by overgrown shrubbery and sagging walls. The circa 1910 home Prince and her husband, Peter Bergh, eventually purchased had been neglected for years; there was even a massive wisteria vine growing through the second-floor windows. “There was nothing salvageable in the house,” Prince says. “But when I first saw it, I knew there was so much we could do with it.”

For twenty-five years, Prince and Bergh lived in New Castle, in a sprawling house they had lovingly restored. Their move to the fixer-upper in

Portsmouth’s South End offered everything they were looking for: an in-town location convenient to downtown Portsmouth and adjacent to a park; and a footprint that enabled them to downsize but with enough space to accommodate visits from their adult daughter and friends.

“Peter and Janet were really committed to downsizing and making the home livable,” says project architect Bill Soupcoff, partner with TMS Architects of Portsmouth, and a long-time friend and collaborator. “They really got the most they could from the space.”

Prince and Bergh have renovated several homes and were clear on their vision for their new home, from architecture to interior design. “They wanted a sanctuary that reflects their values,” says Frances Hodges, of Frances G. Hodges Interiors in Dover, the project’s interior designer. “Bringing in the natural world as well as items that provide peace and balance in their lives was important.”

The couple wanted the amenities of their New Castle home but on a smaller scale: first-floor living with private spaces on the second floor, including a master bedroom and bath; a room for their daughter; and home office space. Prince and Bergh didn’t want to disrupt the neighborhood by tearing down the structure and building something out of character with the area’s mostly Greek Revival-style homes.

Soupcoff designed an addition to the rear of the house that added a screened porch and a back entry. He also expanded the second floor; three new dormers opened the third floor, creating a perfect space for Prince’s office. The original house was completely gutted. “The frame needed a serious upgrade,” says Chris Ragusa, of CM Ragusa Builders in Seabrook, the project builder. “We had to install steel beams to open the interior of the house.”

A new home started to emerge: new windows; a front entry with steps; a detached two-car garage; new electrical, plumbing and mechanical systems; as well as high-efficiency heating and cooling.

Ragusa’s team worked closely with Prince and Bergh to create thoughtful organization and storage elements throughout the home. In response to Bergh’s request for canoe storage, Ragusa created storage underneath the porch that could be easily accessed via removable panels. He also located the home’s air-conditioning units out of sight behind the garage. “Knowing it was a tight space, we really wanted to minimize the mechanical footprint,” Ragusa says.

Prince and Bergh’s preference for simple, contemporary details combined with traditional style is evident inside their home. Their furniture is organic and minimalist, with an emphasis on comfort, and accented by their extensive art and textile collection.

The kitchen—just off a casual, contemporary dining room and screened porch—is the center of the downstairs living space. Bergh, an avid cook, worked with the building team to create an efficient, functional kitchen that met his needs. Everything is within easy reach of the sink and stove top, which overlook the dining and living rooms. Ragusa’s carpentry team built the custom kitchen cabinetry—including, at Bergh’s request, a garbage cabinet that opens with the tap of a knee. Glazed gray-green tile visually ties the leathered granite counter tops to upper cabinets. Bergh’s office is a small space directly off the kitchen. “He wanted an office there so he could be close to ‘his’ kitchen,” Prince says.

Left: With stainless-steel appliances, custom cabinetry and leathered granite counter tops, the kitchen is designed for efficiency. Pendant lights are from Hubbardton Forge; cabinet color is Vex by C2.
Right: As an accomplished cook, Peter can also easily access his office, adjacent to the kitchen.

Choosing colors was critical for Prince, who turned to consultant Lee Perrault of Via Design in Rye for help. “Lee helped me choose the color of the clapboards, which kicked off every other decision as I wanted the whole house to be in a complementary palette. We quickly ruled out dark and pale colors, and focused on the mid-range. And voila—we came up with the kitchen and trim colors.”

The first-floor spaces flow together easily, united by an off-white wall color (Chit Chat by C2), warm quartersawn oak floors and the couple’s art collection. “They have a great eye for art,” Hodges says. “We really tried to make the overall character of the spaces feel organic and textural.”

The living room, anchored by a marble fireplace, features work by local artists as well as textural woven rugs. Ragusa came up with a clever solution to conceal the television (“We didn’t want the TV to be a focal point,” Prince says): hiding it behind a panel over the fireplace. A touch-sensitive latch opens the cabinet.

Hodges wanted the second-floor master bedroom and bath—with views of the nearby park and a backyard terrace—to feel like a retreat from the downstairs’ public spaces. The master bedroom features grass cloth wallpaper, inspired by Prince’s textiles. The master bathroom is a study in texture and natural style, with white subway-tile walls and a slate floor. Gray slate tile, evoking stone, lines the bathroom floor and continues up the tub deck and its back wall. The balance of dark gray and white created “a fun, elemental theme,” Hodges says. “It’s reminiscent of being outdoors.” The honey-colored vanity, constructed of bamboo, adds warmth to the space.

Prince’s office, on the third floor, has a similar sense of retreat. A perfect blend of contemporary and traditional style, and decorated with original art, the room is light and airy. A glass-paneled stairway separates the room into office space on one side and space to relax on the other. The walls and ceiling are painted the same color as the rest of the house, unifying the space.

The massive wisteria vine that overwhelmed the back of the house inspired Terrence Parker, of Terra Firma Landscape Architecture in Portsmouth, in his design for the back terrace and landscaping. “It had an amazing spidery root pattern—like jungle roots,” Parker says. “It was so distinctive, I wanted to replicate it in stone.” The terrace—a varied rectangle of interlocking bluestone slabs with granite edges—borders a stone path. Textural, colorful planting beds are filled with perennials, such as actea, vertical evergreens, geranium, hosta, astilbe and fern. The back fence, constructed of horizontal cedar boards, provides privacy and defines the area. Parker also designed the garden’s quiet water feature: a globe-shaped, layered bluestone fountain.

Hodges says the home, featured on The Music Hall of Portsmouth’s kitchen tour in 2016, evoked audible “ooohs” from visitors. “The colors and textures are brilliant and really create a restorative environment that relaxes you,” she says. “It perfectly reflects Janet and Peter. That’s why it’s such a special space.” 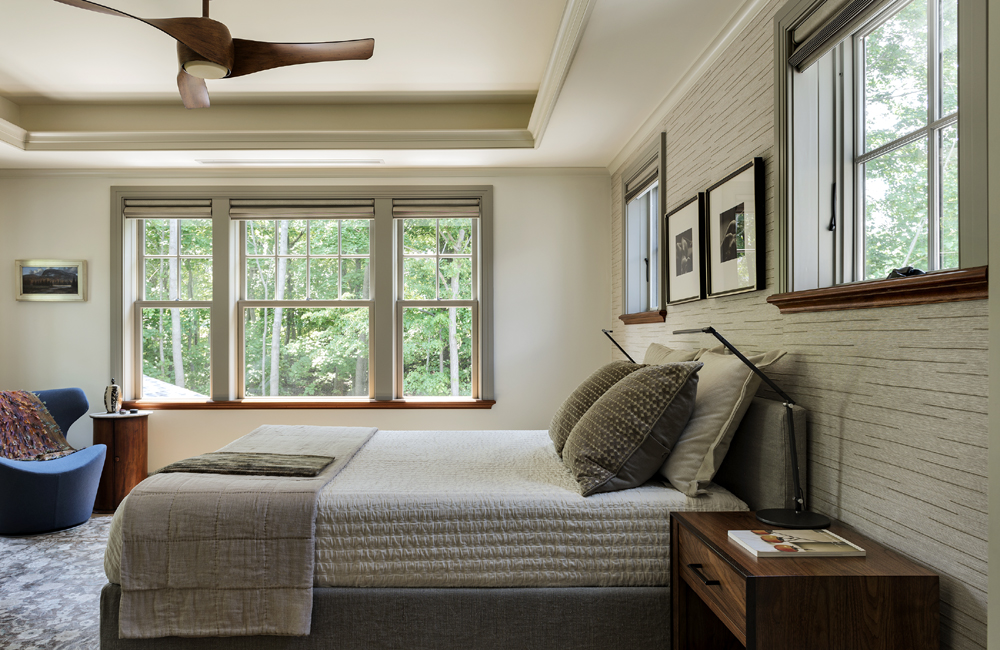 Right: A contrast of textures, the master bathroom has white subway-tile walls and a gray slate tile floor that evokes stone.

Left: Janet Prince’s third- floor office is a light-filled retreat. Furnishings are from Tufty Time; the sculptural light fixture over the stairwell is by Hubbardton Forge.

Right: A new front entrance, with lighted front steps and low-maintenance landscaping, is welcoming to visitors.

All the millwork in the home­—including the main stairway, with mahogany railings and contemporary newel post (left)—was made by CM Ragusa Builders.
Left: The granite terrace is convenient to the home’s back entrance and screened porch.

Right: Inspired by a wisteria vine that used to climb the back of the house, Terrence Parker,  of Terra Firma Landscape Architecture in Portsmouth, designed a quiet backyard retreat, with a stone fountain and native perennials.

Right: Bill Soupcoff, of TMS Architects in Portsmouth, designed new third-floor dormers as well as additions to the front and back of the home to create additional living space. The house has long-lasting, low-maintenance clapboards made from fiber cement.