Downsizing to an Urban Home

This modern condo is nestled in the heart of Portsmouth’s waterfront, surrounded by Colonial-era brick and wood buildings.

This glamorous living room is comfy and well used.

When Sue and Mike Daigle talked with Frances Hodges, of Frances G Hodges Interiors in Newmarket, about working on their new condo in Portsmouth, they were ready for a big change. They’d lived in a rural area long enough, and their move to Portsmouth would be the beginning of a more urban and streamlined life. As they explained to Hodges, they wanted their new home to reflect that change.

“Mike and I have put together so many homes over the years,” Sue says. “First, we lived in apartments and then a condo. Then we bought a small starter home, and eventually, we built a home. Five years after building that home, we moved to New Hampshire and began fixing up a house in a rural area. We did everything ourselves.” 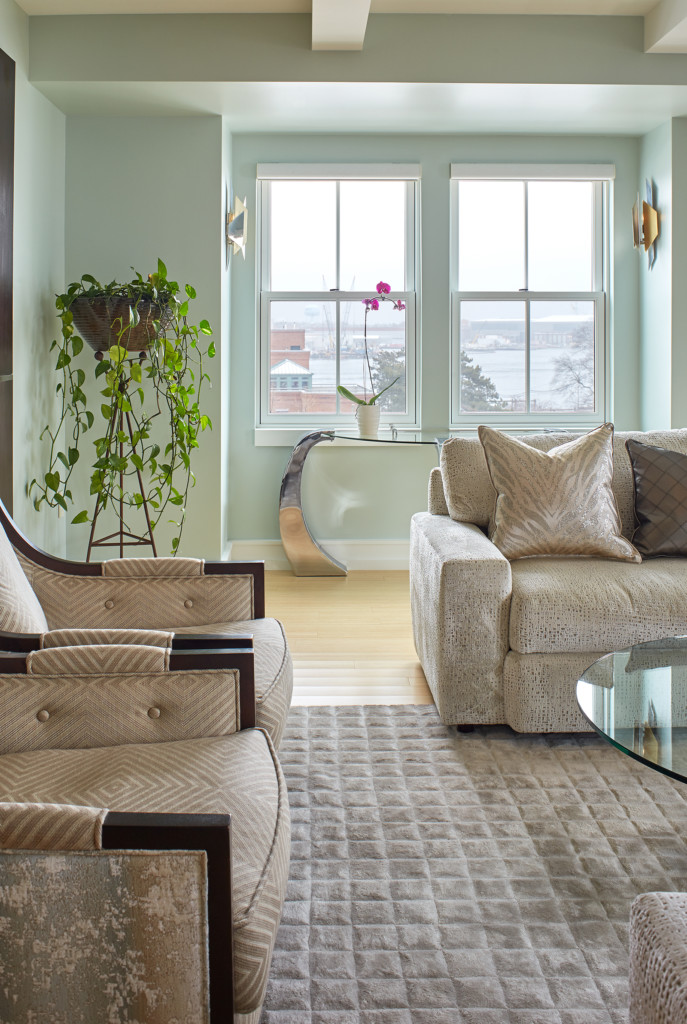 Soft blues and a sand-colored rug and chairs frame a view of the harbor. A shiny wave of a table curls up from the floor.

Their timeline worked out to moving about every five years, all while raising three daughters. This time, rather than spending their time studying fabric swatches, measuring for rugs, painting and tiling, the Daigles enlisted expertise. Enter Hodges along with builder and cabinet maker Eric Bessemer, who is based in Greenland. Both Hodges and Bessemer worked closely with Jen Ramsey, of SOMMA Studios in Portsmouth, and the construction team.

“Sue and Mike really wanted something different,” says Hodges, a self-confessed Excel spreadsheet addict, who brings inspiration along with the managerial expertise to make it all happen. The Daigles’ new condo is exceptional with an uninterrupted view of the harbor and Memorial Bridge. Hodges began with a vision board. She found that the Daigles wanted to capture the open, breezy feel of the coast with its waves and changing moods. And live in a space that’s really comfy.

Throughout the Daigles’ new condo, these coastal elements are subtly referenced. One element that realizes this vision especially well is the dark, mirrored wall in the living room. It shimmers, reflecting light very much like the harbor’s dark water just outside.

What seems simple, though, is actually carefully engineered. “I love layering light,” Hodges says. For this spectacular wall, Hodges used antique-textured glass tiles with silver-leaf backing. The narrow shelf at either end is inset into the wall. In the center, a single arched leg supports the shelf. An inch-and-
a-half space separates the shelf from the wall, which allows the lights inset in the ceiling and baseboard moldings
to create a floating effect.

The room is beautifully centered by an Italian chandelier and elegant hearth. Comfortable, modern furniture defines an intimate, cozy space.

There was a couch from their previous home that Mike especially liked. “It was pretty shabby,” Sue says. “And he was disappointed when it didn’t make an appearance here. But then, he discovered the new couches.”

“The velvet on the couches is entirely synthetic and very durable,” Hodges says. “Plus it has a burnout pattern underneath. You just want to touch them. They’re very approachable and welcoming.”

In fact, most of the furnishings and artwork have been sourced through local vendors—who are often longtime associates of Hodges, such as Cabot House, Dovetailed Kitchens and Kennedy’s Gallery and Custom Framing, all in Portsmouth as well as The Lighting Center at Rockingham Electric in Newington. “The showrooms in this area have knowledgeable and sophisticated personnel,” Hodges says. “They know their stuff and can source just about anything for you.”

Signaling the living room’s entryway are two, large armchairs backed in an abstract tan and black fabric. The chairs make seamless that critical transition from the sleek kitchen and dining room to the living room with its softer contours and serene color scheme.

Throughout this condominium, light plays a pivotal role. The foyer’s cool, stylized look is achieved with elegant sconces and cove lighting at ceiling height. These lights accentuate the foyer’s modern, custom moldings, made by Bessemer. The careful placement of the table and lights reflect the stairwell. The results are a balanced study in gray and taupe.

Hodges’s playful sense of light manifests in the stairwell where wall lights bend and extend onto the ceiling. What might have been a cavernous space is instead lively and light filled. “With LED lights, the technology is so good you can adjust the Kelvin temperature. The light can have a warm glow, but the brightness can change,” Hodges says. “Additionally, the textured wall treatment brings the light right to you.”

The more private rooms, such as the master bedroom, have a different color palette with more greens and browns. Touches of silver cede to gold; textures are velvety; and the feel, overall, is quiet. The master bath has two sinks, two mirrors and a roomy shower. The feel is luxurious but not fussy.

Living in their home 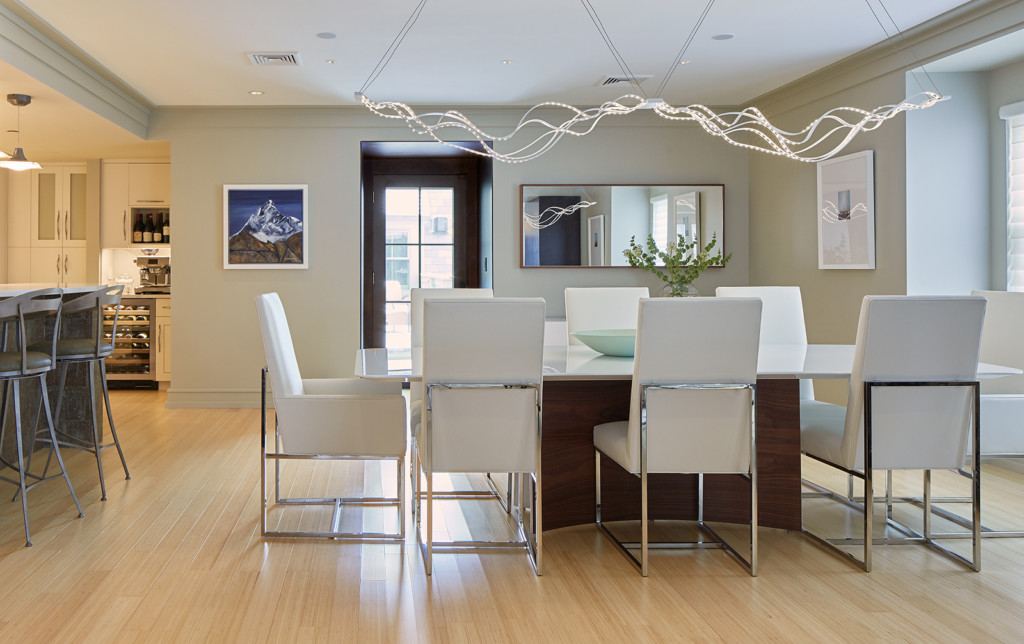 Like a dancing wave, this spectacular light fixture creates a special place to gather.

What does day-to-day life look like for the Daigles? “Well, I spend a lot of time working at the kitchen counter on my computer doing correspondence and planning. My last daughter just got married last summer,” Sue says. “Plus, I’m involved with a lot of organizations. So I’m out and about.”

Mike recently transformed his upstairs “man cave” into an office since the company he works for just went virtual. For lunch, he’s often meeting with friends and business associates.

In the evenings, the Daigles gravitate to the living room to relax, watch a game and be by the fire. The couches work beautifully.

An added benefit of enlisting Hodges’s expertise as an interior designer is that Sue could focus on more personal elements. Like many of us, she has boxes of family photos. “I used to have family photos all over our old house, and it was a bit much,” she recalls. “When I was looking at photos, Frances gave me the inspiration to make it a gallery project.

“So, I organized the photos by brides and babies. I made a hallway gallery, and put my side of the family on one wall and Mike’s on the other. When it’s organized this way, you can really see family resemblances. My mother always used to say that she saw some of herself in my youngest daughter. I never saw it until the photos went up. And now when I look at this, I also see resemblances with my great-grandmother and my aunt.

“The gift of this home is that we get to live our lives fully right now.”