Blending New England antiques with pieces by the New Hampshire Furniture Masters has resulted in a unique and exquisite collection. 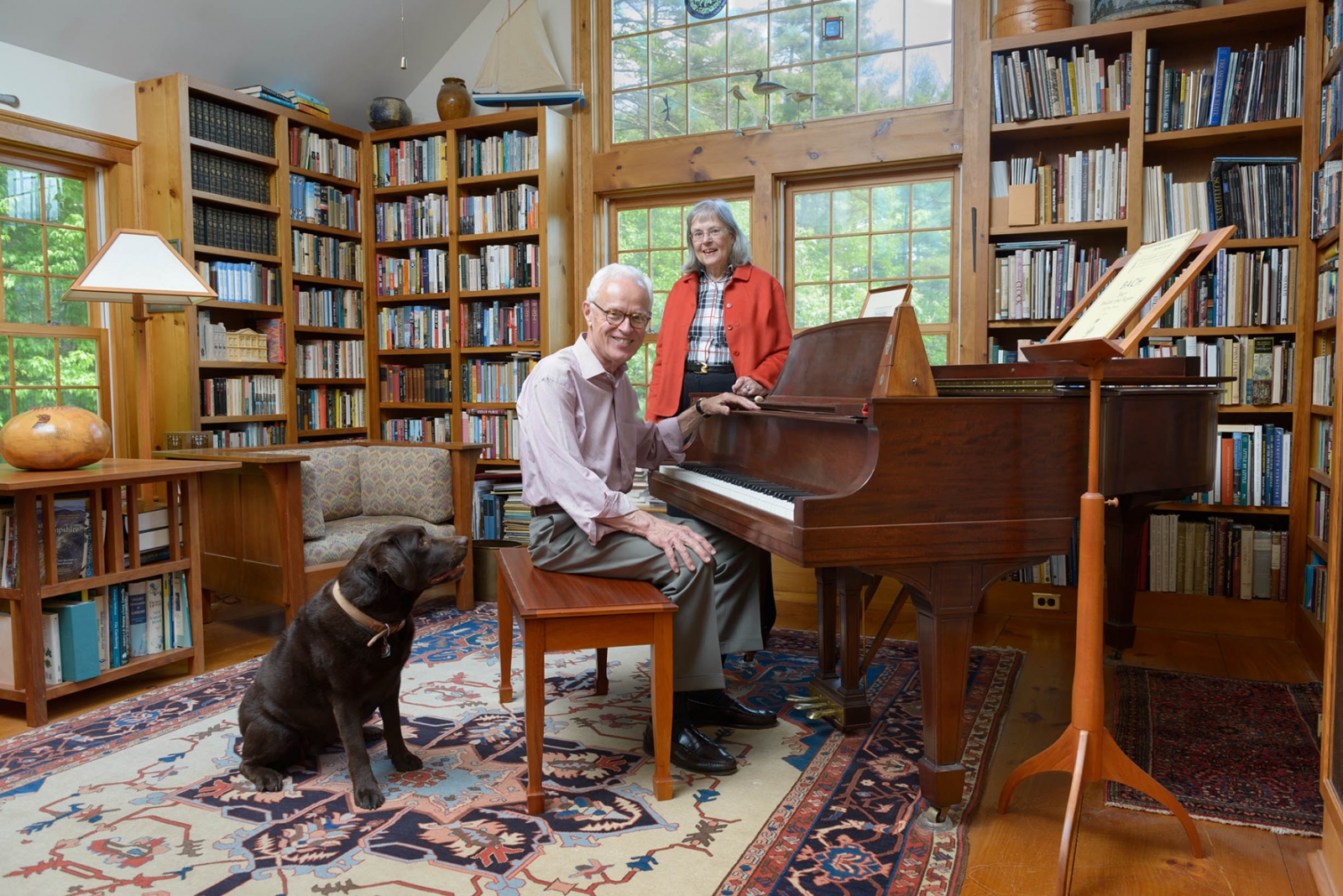 Dr. Bob and Jill Wilson, along with their chocolate Labrador retriever Emma, enjoy spending time in the library, where natural light is abundant.

Dr. Bob Wilson’s love affair with antique furniture began during his residency at the Millard Fillmore Hospital in Buffalo, New York. “The hospital was going to throw out a Queen Anne slant-front desk, so I asked if they’d take two dollars for it.” That was fifty-one years ago, and this transaction was Wilson’s first purchase for his now impressive collection of furniture.

Today that desk is in his study—in much better condition now than it was then. It’s at home with many other pieces of furniture, some antique and some new. Despite their differences in age, what all these pieces have in common is their fine design, attention to elegant details and connection to the nearly three centuries of history of fine furniture making in New England. 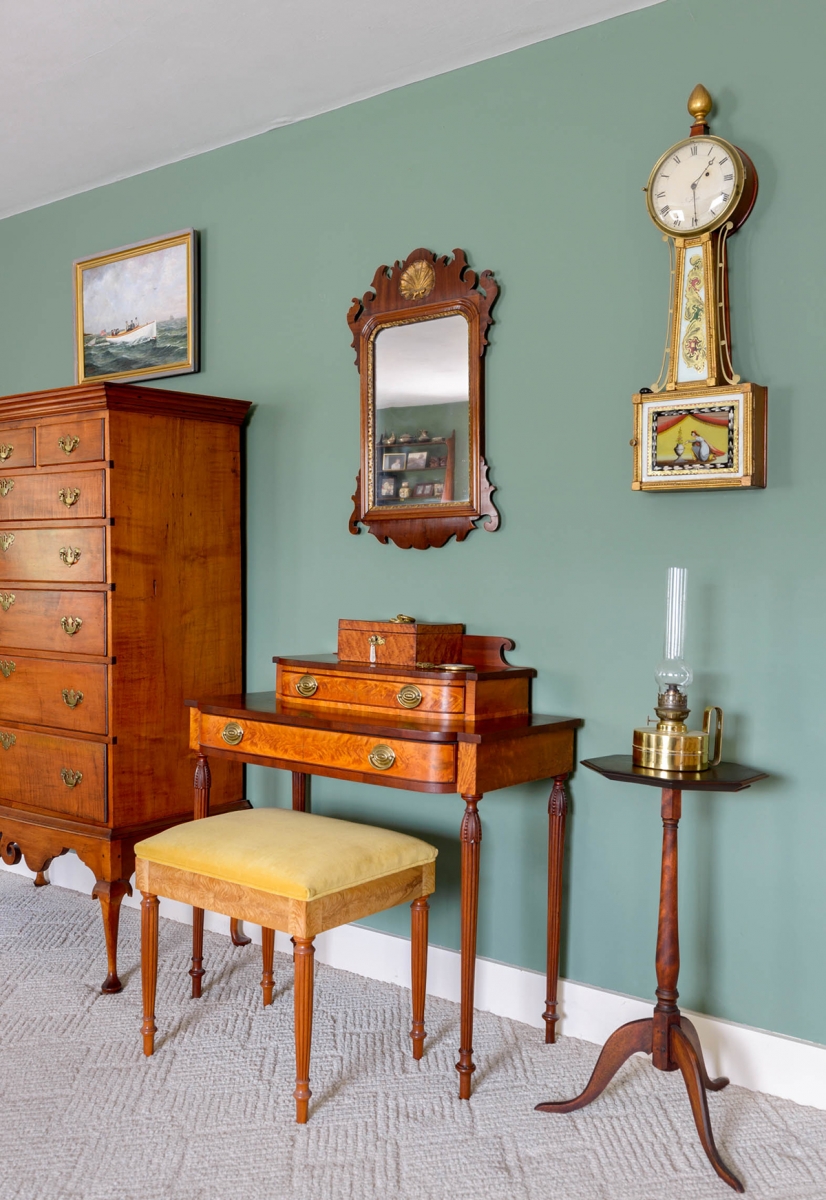 In the bedroom, next to a Dunlap chest on frame, is an antique flame birch and mahogany dressing table made in Salisbury. The stool was made by New Hampshire Furniture Master William Thomas in Rindge. The antique clock was made by Ivory Hall in Concord. These antiques were purchased from Gary F. Yeaton in Concord.

Upon completing his training, Wilson made his way to New Hampshire in 1965 and established his practice of oral and maxillofacial surgery with offices in Concord and Peterborough. One of his early patients was Richard Withington from Hillsborough. “He was probably the best-known auctioneer in New Hampshire,” Wilson says. “He was highly respected in his field and a very interesting guy.”

Withington’s focus was Americana—particularly furniture, paintings, silver, ceramics and anything related to New England—and he sold items from estates all over the Northeast. From Withington, Wilson bought an eighteenth-century tall case clock made in Concord and a Queen Anne tip-top table made in Philadelphia, among other pieces. Wilson also got to know some of the dealers in the area, including the late John Felsen from Henniker, who specialized in Colonial furniture. Wilson bought several pieces from him, too.

Wilson also went to shows, such as that of the New Hampshire Antique Dealers Association, which had its fifty-eighth annual show in August. At these shows, Wilson would meet other dealers and later visit their shops. Antiques dealer Mabel Lomas introduced him to Gary F. Yeaton in Concord, who specializes in New Hampshire pieces. From Yeaton,
Wilson bought a Dunlap chest on frame, a dressing table made in Salisbury and a nineteenth-century banjo clock made by Ivory Hall in Concord.

“With these dealers,” Wilson says, “I shared my love of history and interest in the people who made these pieces. For example, I learned that in addition to beautiful decorative silver pieces, a silversmith would also make harnesses for horses and eyeglass frames.” 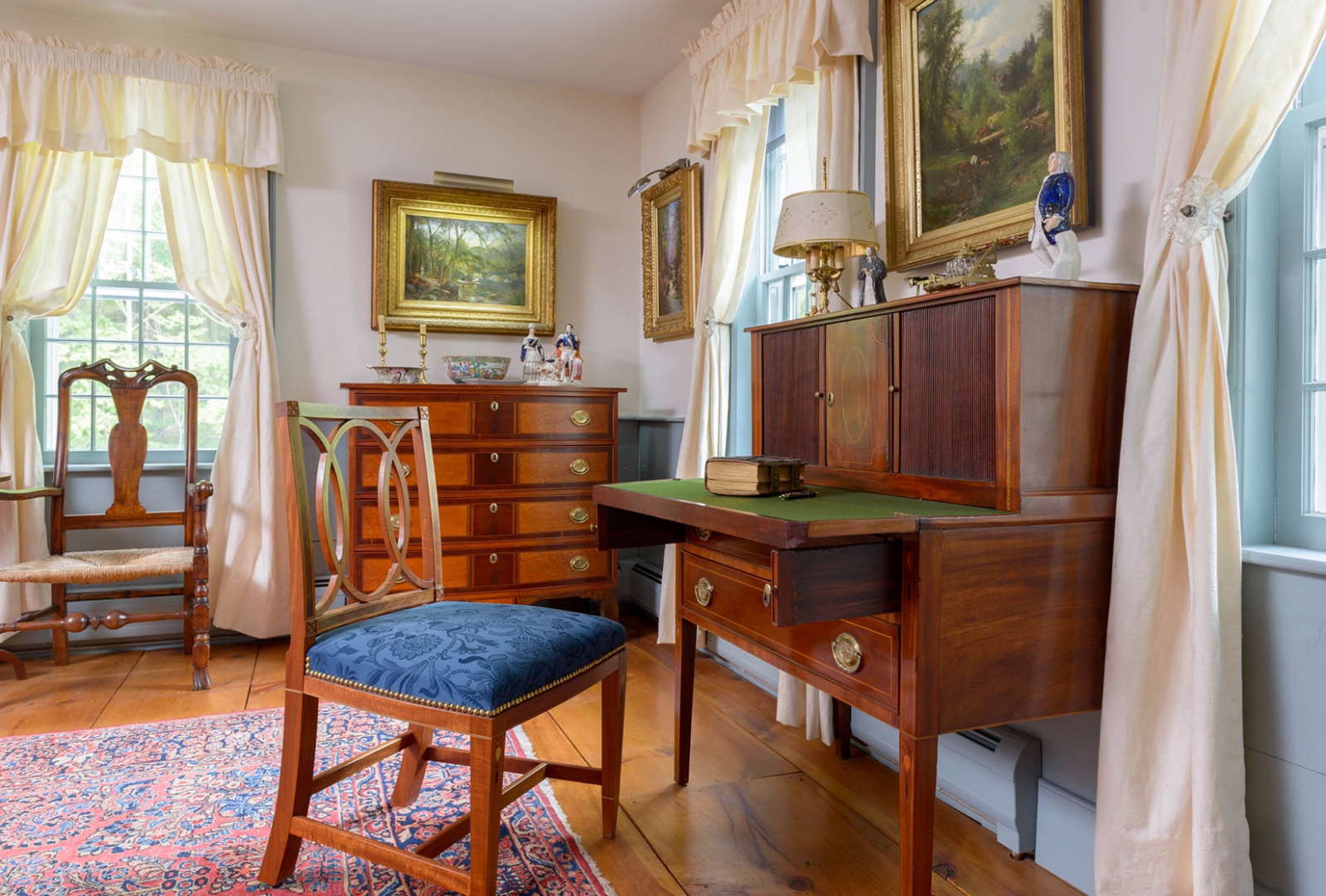 New Hampshire Furniture Master William Thomas made the upholstered side chair in 1996 to go with the Federal mahogany tambour desk made around 1790 by Edmund Johnson of Salem, Massachusetts. Thomas incorporated the desk’s inlaid bellflowers separated by ebony dots on the chair’s legs. The chest to the left of the desk was made in Gilmanton by Ephraim Mallard in the early nineteenth century.

In 1985, Wilson became president of the board of trustees of the New Hampshire Historical Society. In 1990, he and then-Executive Director John Frisbee were approached by Anthony Hartigan. “Tony was counseling the fine furniture makers in New Hampshire,” Wilson says, “since they were struggling to find outlets for their work. A few, like David Lamb, were well known outside of New Hampshire, but Tony wanted to create a marketing plan for a defined, self-selected group that later became the New Hampshire Furniture Masters. I give him so much credit for this great idea to provide wide exposure for these remarkable craftsmen.”

Wilson became intrigued with Hartigan’s idea. Based on the tradition of artist and patron, Hartigan suggested that a prospective patron would go to one of the Furniture Masters and discuss making a piece of furniture. The patron would agree on the design of the piece and its price, and upon completion, the piece would be placed in an auction. If the piece sold at auction for a higher bid, then the Furniture Master would make an identical piece for the patron at the previous agreed-upon price. This arrangement was a win-win for both parties and became the basis for the New Hampshire Furniture Masters’ annual auction and gala. It has been such a success that the group will celebrate its twentieth annual event in October. 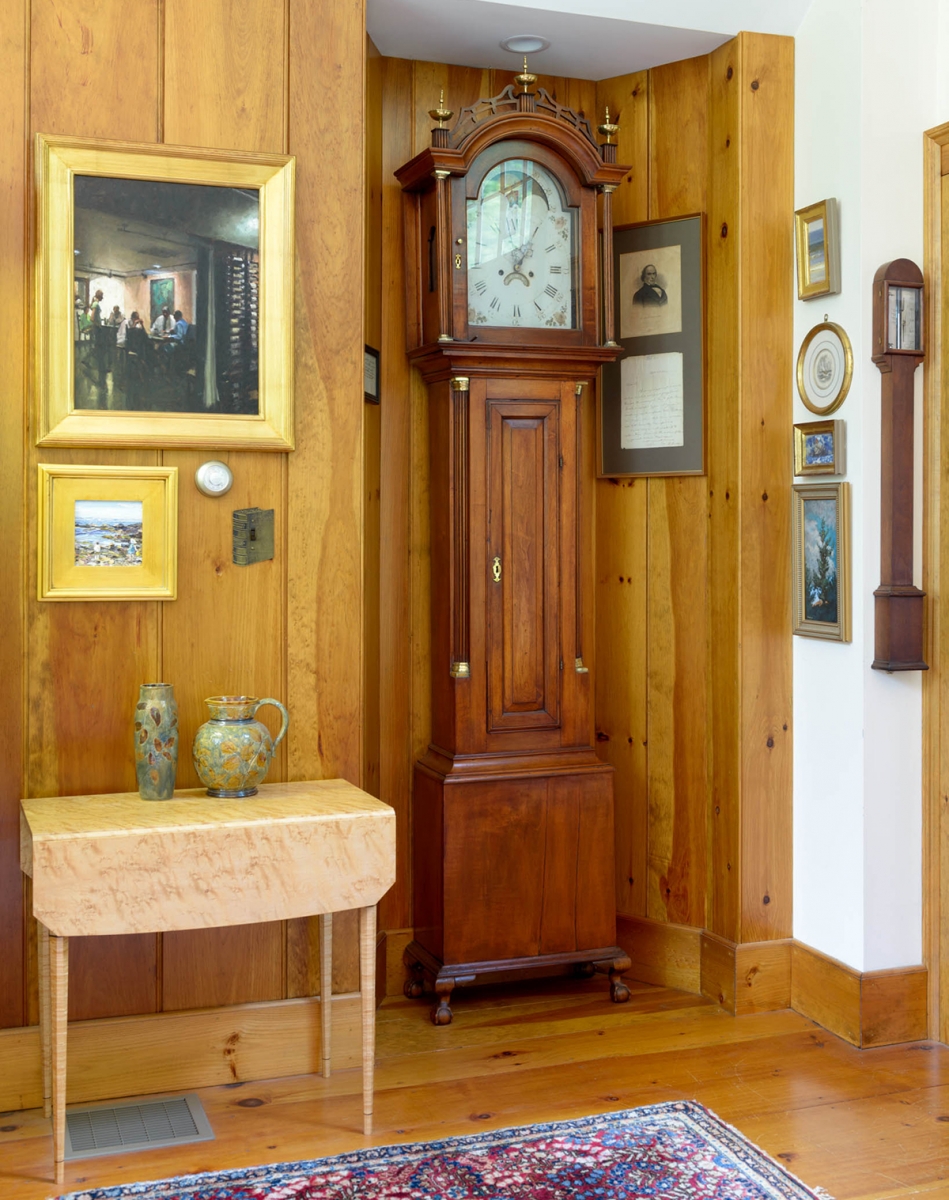 New Hampshire Furniture Master David Lamb in Canterbury made the bird’s-eye maple drop-leaf table in the library. The table’s legs are octagonal. The tall case clock is an antique made by Timothy Chandler of Concord.

“One reason I so like the New Hampshire Furniture Masters is that they’re carrying on the traditions from three hundred years ago, when Portsmouth cabinetmakers were building spectacular pieces for a new generation of businessmen,” Wilson says. “Bill Thomas, David Lamb, Tom McLaughlin and the others create and build much like eighteenth-century furniture makers Langley Boardman, Jonathan Judkins, William Senter and the Dunlaps. They are true artists at work.”

Among pieces by New Hampshire Furniture Masters in Wilson’s collection is an upholstered side chair made by Thomas in 1996. Wilson wanted a chair for a Federal mahogany tambour desk made around 1790 by Edmund Johnson of Salem, Massachusetts. The desk’s design details include inlaid bellflowers, separated by ebony dots on the legs, signatures of Johnson’s work. Wilson liked the design of a chair at the Museum of Fine Arts in Boston and wanted Thomas to build an identical one, using the inlaid bellflowers and black dots of the desk on the chair’s legs. “No problem” was Bill’s answer.

So Wilson became Thomas’s patron for that chair, and it was such a standout that it was borrowed for a New Hampshire Furniture Makers event in Nashua, where then-first lady Hillary Clinton sat on it. Subsequently it was sold at the Furniture Masters’ auction for a higher price than Wilson paid. “This accomplished two things,” Wilson says. “The furniture maker got an even higher price for the piece than what we’d originally agreed on, and he also got valuable exposure at an auction that was well attended. People would come from all over and would spread the word about these fine craftsmen making beautiful furniture. What a wonderful vehicle the auction has been.”

Thomas also made a walnut dressing table for Wilson, who wanted a gift for his wife, Jill. Its design was inspired by a Portsmouth piece at the Currier Museum of Art in Manchester. “It has a turtle shell carving on the skirt,” Wilson says, “and is a beautiful and unique piece. Its proportions are so perfect, and every time I look at it I smile.”

Wilson gets high marks for his curatorial skills in establishing a cohesive and beautiful collection. He draws many parallels between the furniture built hundreds of years ago and pieces being created today. “In the late eighteenth and early nineteenth centuries, people would ask for a bed, a table or a cabinet for clothing. The furniture maker would suggest the type of wood, make drawings to show the client and modify the design to the client’s taste,” Wilson says. “They would agree upon the price, and then the maker would build the piece of furniture. They made everything by hand, using the same chisels, knives and sanding blocks
often used today.”

Those parts of the process haven’t changed much since the 1700s, and today people are making the same requests of equally talented artists. “This connection to the past is being carried on by the New Hampshire Furniture Masters,” Wilson says. “Two hundred years from now, people will look at their work and know what wonderful craftsmen were working in 2015!”

Celebrate with the Furniture Masters!

Join the New Hampshire Furniture Masters on Sunday, October 4, 2015 for their twentieth anniversary gala, Furniture Masters 2015: Our Stories. The day begins with an exhibition of new works and silent auction from noon to 5 p.m. (free and open to the public). The event continues at 5:30 p.m. with a dinner with the furniture masters and a live auction (tickets are $50).