In early May, the town of Dunbarton nearly glows from displays of these sunny flowers. 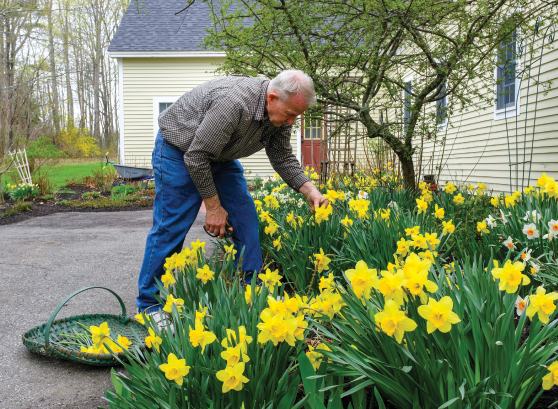 Dr. Herbert Allen picks daffodils at his home, the Molly Stark House in Dunbarton. His wife, Laraine, is a descendent of John Stark, and the Allens are pleased to have the house back in the family again.

Those driving the main streets and back roads of Dunbarton in the spring can’t help but notice the cheery displays and drifts of daffodils growing for miles. They may appear natural but, as any gardener knows, these flowers did not just appear on their own. A lot of work and the concerted efforts of a diverse group of people went into bringing these gardens to town.

It all started in 2004 when the Dunbarton Garden Club was looking for a fundraiser. “We needed something long term that would bring in a steady source of revenue and support the upcoming 250th anniversary of the town,” says club member Donna Dunn. The club was working on a long-range plan because the anniversary would not be celebrated until 2015, and the work needed to satisfy the club’s mission statement of beautifying the town and working with schoolchildren.

Dunn suggested selling bulbs. “I already had five thousand daffodils planted in my yard, and people always remarked on how beautiful they looked,” she says.

At first, club members thought of buying bulbs locally, but they found a wholesale company in the Netherlands that would export fresh bulbs directly to Dunbarton. “The bulbs were so huge they looked like grapefruits!” Dunn remembers, “We knew we had a really good product.”

Dunn and club President Judy Petersen went to the Board of Selectmen in 2005 with their proposal, asking the board to sanction the project and approve the logo “Daffodils for Dunbarton.” In exchange, the garden club agreed this would be the kickoff to the town’s 250th celebration in 2015, that the garden club would complete the full ten years selling bulbs, Dunbarton’s history would be tied into the project and the monies raised would benefit Dunbarton.

The selectmen threw in their wholehearted support, allowing the garden club to install a drop box at the Town Office and use it as a mailing address. The Board of Selectmen participated in press releases, allowed the club to use town facilities to advertise and sell, and even let the garden club set up a small kiosk at the Town Office. Most important, the Board of Selectmen created a line item in the town accounts and accepted monies for the first year until the garden club obtained their own nonprofit status. “We couldn’t have proceeded without the town’s help,” Dunn says.

All because of daffodils

To tie the bulbs in with town history, the garden club thought of naming the different varieties of bulbs after local historic figures. They joined forces with the Dunbarton Historical Awareness Committee to research prominent people from the past. Of course, the obvious ones who spring to mind are General John Stark, his wife Molly, and son Caleb, but there are many more.

• Poet Robert Lowell was a Stark descendent and spent summers in Dunbarton at his grandfather’s home. He even wrote a poem about it, so “Lowell’s Lyrics” became the name for an antique poeticus variety.

• Carroll Wright was a senator, college president, supervisor of the U.S. census and the first U.S. labor commissioner. His daffodil is buttercup yellow with a scarlet-orange cup.

• Louisa Whipple was a nationally known abolitionist who helped form the Dunbarton Female Anti-Slavery Society. A group of daffodils with pink, rose and apricot cups was named “The Sister Society” in honor of that group.

• Mark Bailey was a professor of elocution at Yale and became Abraham Lincoln’s voice coach. His daffodil has coppery-yellow petals with a crimson cup.

• Marianne Parker Dascomb was the first female college president in the United States at Oberlin College in Ohio. She oversaw the education of Amistad captive Sara Margru Kinson and was a supporter of the Underground Railroad. In honor of her two hundredth birthday, the students at the Dunbarton Elementary School sent two hundred daffodils called “Dascomb’s Devotion” to Oberlin where they were planted in front of Dascomb Hall. 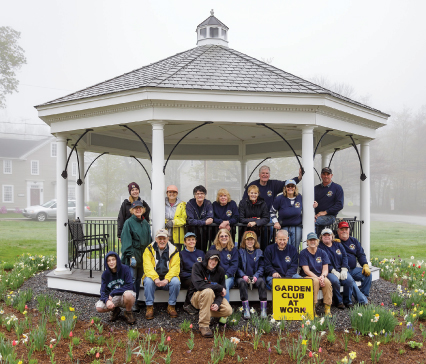 A little spring shower doesn’t thwart the members of the Dunbarton Garden Club and two teenage volunteers as they spruce up the town common for the upcoming season.

“We discovered more about our town history than we ever dreamed,” Dunn says. “This is all because of daffodils. Nobody knew any of this until we researched names for the bulbs.”

To get the word out about the daffodil project, the club had to get creative. “We had a great graphics gal in the club who helped design our color brochures,” Dunn says. Since the group could not afford mass mailings, members resorted to hand-delivering the brochures to every house in town.

Members of the garden club planted bulbs at the elementary school with the students, and for several years, each child received a package that included a bulb, fertilizer as well as instructions with a ruler and planting stick to take home and plant with an adult. 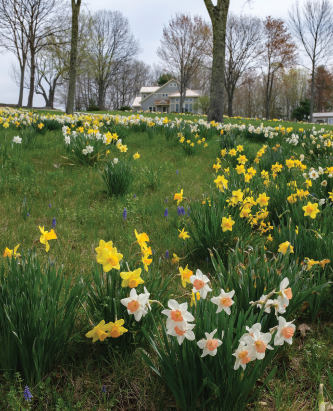 Dunn Cottage, where Donna Dunn has about five thousand daffodils growing, sparked the idea for planting the bulbs town-wide in Dunbarton.

The garden club didn’t set an official goal for the first few years. “Eventually, I came up with one hundred thousand based on the number of bulbs we were actually getting into Dunbarton soil,” Dunn says.

Not only are more than one hundred thousand bulbs planted in Dunbarton, the garden club estimates it sold between another fifty thousand and seventy-five thousand to people in other towns.

“Everything was on a spreadsheet, and each year, I extracted just what was planted here either by the club itself or residents, so we’d know how hard to push during the last few years,” Dunn explains.

The club members began by hand-planting bulbs along the roadways where the flowers would be visible; but some proved to be a little too tempting and got picked. “We asked homeowners if we could plant on their property where the flowers would still be seen from the road but would have someone to watch over them,” Dunn says. Dozens agreed to become “daffodil parents.”

“It completely changed the dynamics of the group,” Dunn says. “We could never have done it otherwise.” 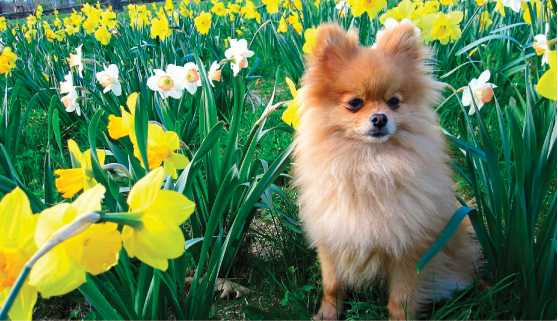 Kelly Halldorson’s tiny canine companion, Copper, poses willingly among the daffodils, most of which are taller than he is!

The Dunbarton Garden Club achieved its goal in November 2014 when the one hundred thousandth bulb was planted.

As part of its mission statement, the garden club seeks to create an interest in gardening, beautify the town, and educate schoolchildren about gardening and nature.

Money from the sale of bulbs has gone toward planting flowers at the town common every year and funding the Roots Garden Club at Dunbarton Elementary School. “Roots is an after-school program that exposes kids in grades one through six to gardening in fun ways,” Dunn says. “They learn where their food comes from and are more willing to try new things if they have been involved in growing them. In the fall, they prepare a harvest meal from the produce they have grown in the school gardens. Mother Nature is the best teacher!”

The garden club is a major contributor to the program and has helped purchase a garden shed, tools, T-shirts and equipment.

Dunbarton’s daffodil project has inspired neighboring towns to do the same thing.

Goffstown, Weare and New Boston—also located along the General John Stark Scenic Byway—have been planting daffodils in their towns, too.

When the Atkinson Garden Club contacted Dunn about doing a similar fundraiser and plantings along the Robert Frost/Old Stagecoach Scenic Byway—which runs through Derry, Hampstead, Chester, Auburn and Atkinson—the Dunbarton Garden Club generously shared its resources. “I sent them spreadsheets and order forms so they would not have to reinvent the wheel,” Dunn says.

When you are out and about this spring, make sure to take a drive down the Route 13 stretch of the General John Stark Scenic Byway in Dunbarton and enjoy the show! Dunn says between the last two weeks of April and first two weeks in May will likely be the best time to see the daffodils, and suggests checking the Dunbarton Garden Club’s Facebook page.

Left: The Molly Stark House was built in 1759 by her father Captain Caleb Page. She moved there as a young woman and lived there after her marriage to John Stark. The house was used as Dunbarton’s first post office in 1834.

Right: Be sure to take a drive through Dunbarton this spring and enjoy the sight of one hundred thousand daffodils in bloom.