Embracing living on the lake

Building near any body of water is never easy. Those who design lakeside homes agree that most lots present three consistent challenges: they are narrow, steep and small. And when Lindy and Ellen Joseph approached architect Sheldon Pennoyer of Sheldon Pennoyer Architects in Concord with the goal of designing their home on Lake Nubanusit, these three hurdles were waiting.

Pennoyer remembers first scouting the site, where an existing home stood. “It was a pretty quick study before we determined that renovating the current structure wasn’t feasible,” Pennoyer says. “The lot is 150 feet deep with a 30-foot drop from the road to the edge of the water. So the challenge became how to connect the house and the people who live there to the lake.”

Many others in this situation have decided to build a big house with a big deck overhanging the land down to the water. But Pennoyer saw the opportunity for something different: start with the concept of two cubes (one as the main living space, and the other as office/garage space), connect the two with a bluestone patio that creates an outdoor living space, and finish with stone-wall terraces and a winding stairway to the lake.

“A lot of lakehouses follow the Adirondack Style, where there are a lot of rooms around one big great room,” Pennoyer says. But Pennoyer modified that approach to allow the living space to flow outdoors: the kitchen and living room feed that area through a screened-in porch. “I wanted to give them a unified family space,” he says.

And the approach Pennoyer—along with his associate Renee Fair and former business partner (now retired) David O’Neil—used was extremely successful. “Instead of building a big house that feels empty when it’s just Ellen and Lindy there, Sheldon created a house that can expand to hold a lot of activity,” says feng shui consultant Ellen Kambol. “All gathering spaces are geared around an intimate family setting but can shift to accommodate more people.”

“On paper, this space seemed small,” Pennoyer says. “But I encourage my clients to really think about what they need. And the decision here was that the outdoor patio achieves so many of the Josephs’ needs that the house would be just right. And I’ve been here when there were more than twenty-five people for dinner, and—with people moving indoors and out—it didn’t feel small at all.”

Working on the edge of Nubanusit

Lake Nubanusit is a stream-fed lake in Hancock and Nelson with a rocky shoreline. Because more than 60 percent of its shoreline is conservation land—due in part to protection by the neighboring Harris Center for Conservation Education—large-scale development has not occurred here. The result is that Lake Nubanusit is known as one of New Hampshire’s cleanest, clearest lakes.

“We had to keep the lake perfectly clear,” says Chuck Simpson, owner of Simpson Landscape Company in Dublin, who was brought in for the Joseph project. “So working here was stressful. We had to work quickly and cover our tracks—like how you paint your way out of a room.” Silt fences were installed; work was coordinated to avoid summer rainstorms that result in run-off; and everything was covered at night.

To implement’s Pennoyer’s envisioned serpentine staircase that connects the house to the lake, Simpson started at the water’s edge and worked up. (When Simpson began, Pennoyer had already designed the two stone terraces that break up the steep grade to the water; stonemasonry was by John P. Given Construction in Jaffrey.)

Simpson’s landscape crew brought in a crane and an excavator, and started with the bottom step. He was able to use a lot of old granite curbing from the home that was previously on the site. To that, Simpson added organic, rounded pieces that were hand-selected from a New Hampshire quarry as well as large local boulders to mimic the surrounding shorelines. 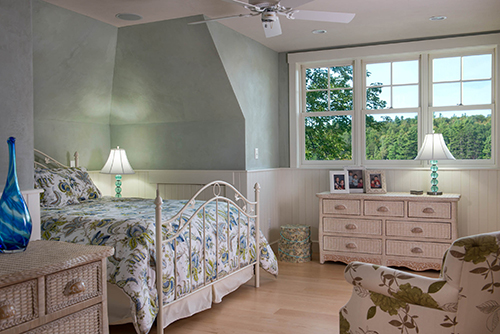 Feng shui consultant Ellen Kambol partnered with Lisa Teague of Lisa Teague Studios in Portsmouth. In the master suite, Teague blended four blue hues to create a custom wall color that mirrors that of the lake in changing light.

“We want to blend in along the shoreline,” Simpson says. “Lake Nubanusit isn’t like bigger lakes—it’s got it own feel and culture. Everyone there loves their privacy. You can look out but you don’t see other homes. So the goal is to blend in with the natural woods around.”

To help achieve that, mature trees were brought in and staged in a landing area that the Harris Center had cleared for a logging operation. “Some trees we could bring the rest of the way on our truck,” Simpson says. “Others went down the road on a front-end loader, one tree at a time.”

As a result, the Joseph house snuggles the shoreline without being overbearing. “We controlled the scale by using organic forms that bring the roof eaves down to the land and supplementing that with natural landscaping to soften the structure against the lake’s edge,” Pennoyer says.

To maintain the serene feel of the home on the inside, Kambol partnered with Lisa Teague, of Lisa Teague Design Studios in Portsmouth, who specializes in color design and custom-painted surfaces.

“The goal here was to take advantage of the lake views with as few obstructions as possible,” Kambol says. “Ellen and Lindy wanted the feel of a traditional lakehouse with lots of wood, but they like a refined interior.”

Teague’s American Clay wall finish was the answer. “I like to play with color,” Kambol says. “Here, we blended natural colors. We get the lightness by using lighter colors that also reflect the richness of the home’s wood.”

Kambol and Teague chose American Clay wall finish for several reasons: The clay has a high mineral content that “kicks the light back around,” Teague says. “With American Clay, the walls are textural—they don’t just appear to have texture. Flat surfaces absorb light.”

In the master suite, Teague blended four blue hues together to create the wall color. “Ellen [Joseph] really wanted to feel like the lake is part of this room,” Teague says. “The wall color is like that of a lake: the color changes as the light moves and the wind washes over it. You can feel where it’s deeper and shallower.”

While color is key for many interior walls, that’s not the case for the wall of windows that faces the lake. Here, the goal was to create an interior design that wouldn’t interfere with the views. Kambol achieved this by keeping the furnishings low and not painting the window trims. “Your eye goes to the lake,” Kambol says. “It’s not distracted by a painted wood line in the middle like it would be if the window trim were painted.” 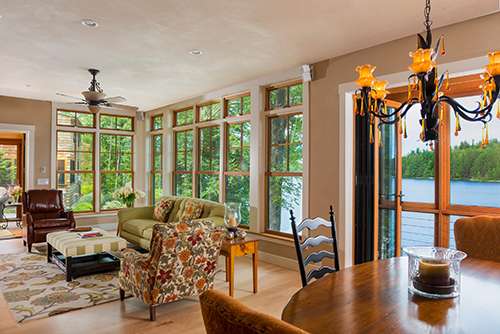 Although the main living area isn’t huge, the space feels airy and open. “All gathering spaces are geared around an intimate family setting but can shift to accommodate more people,” feng shui consultant Ellen Kambol says.

The resulting color and furnishing details allow the interior wood to share the spotlight. Woody Huntington, owner of DS Huntington Company in Hancock, came on to the team to build the cabinetry. (Huntington’s work is seen in kitchen cabinets and island; the cabinetry on either side of the fireplace in the living room—there’s room for an entertainment system on one side; a bar on the other; in the pantry, which serves a second kitchen; in the bathrooms; in the front entry; and in the master bedroom suite.)

“Before my work started, Sheldon and the Josephs had worked out how much wood would be used on the inside of the house,” Huntington says, “our job was to artistically execute that plan.”

In doing so, Huntington worked to understand what the Josephs needed from their house and how they were going to use it. “It’s all about functionality,” Huntington says. And for the Josephs’ space-conscious house, it was important to streamline the kitchen space as much as possible. As a result, Pennoyer designed a pantry that serves as extended kitchen space. The pantry holds many of the appliances typically found in the kitchen itself, specifically the double-oven.

“This house is so clearly oriented to the outside,” Huntington says. “The goal is to be there in the summer and enjoy the outdoors. So the home’s layout needs to reflect that. That’s why the cabinet in the living room has a second fridge.” This space is dedicated to holding drinks and is easily accessible with just a few steps from the outdoor patio. “That keeps the traffic out of the kitchen,” Huntington says.

The teamwork that executed Pennoyer’s design resulted in a project that all are clearly proud of.

“It is always a welcome challenge to create a successful family retreat that is of an appropriate size and scale to the lake it inhabits, and works well with the natural edge of the lake,” Pennoyer says. “This project does all of that.”

“This was a good project,” Simpson says.  “We had a good team all working together. And the results were worth it. Lindy’s eyes light up when he talks about his property here. This was his boyhood dream. When you can help someone make his dream even better, you want to do that. We helped him build his retreat.”