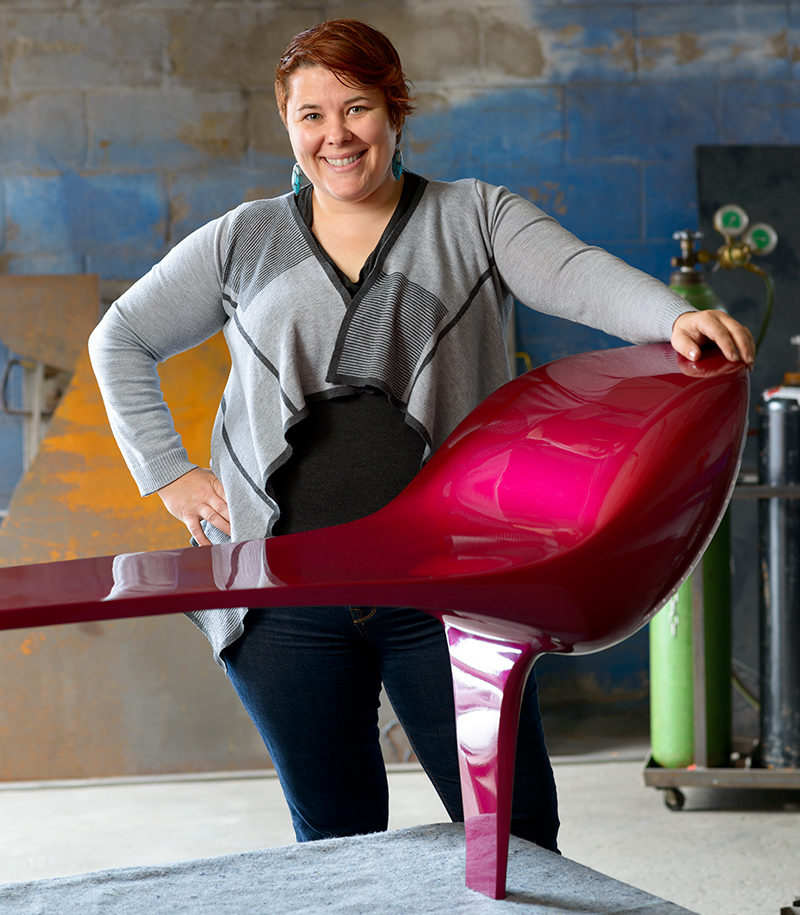 The inspirations for this bench, part of Beer’s “Anchored Candy” series, were fashion and hot rods. She uses the techniques of high-end automotive finishing
to achieve the depth of the candy apple red color.

“I make furniture that is simultaneously sculpture,” Vivian Beer says. “It is built to make you think and feel as well as function in your home.”

Comfort is important to the nationally recognized furniture designer and maker, but so is the conjuring of a physiological experience. As Beer says, “When you see that a piece is beautiful from across the room, you have the memory of that attraction in your mind as you sit on it—making you a part of its attraction, both performance and participant.”

Beer accomplishes this with the surprising combination of rugged industrial materials—sheet metal and concrete—with the luxuriousness of compound curves. It is a style she calls “sexy industrial.” With welders, torches and the other tools of metal fabrication in her Manchester studio, Beer creates a soft elegance that has, as she puts it, “a come-hither look.”

There are two reasons she’s attracted to curves: one functional, the other aesthetic.  “I use rigid materials, which means the forms touching your body need to conform to the body,” she says.  “Our bodies are not made of sharp angles and corners, so why should our furniture be?”

The aesthetic aspect comes from the forms she uses as visual cues for inspiration. “As someone who uses abstraction as a major component of my design process, almost anything I encounter can become source material,” she says. “I categorize them as forces of nature and forces of culture.”

In nature, inspiration can come from the design dynamics of formations and transformations, such as wind, tide, erosion, and freeze and thaw; in culture, it can be things such as aeronautics, fashion, architecture and car design. Those things­—“the stuff we live with,” Beer says—can become “powder kegs of meaning that I absolutely love to play with.”

As she did in her “Anchored Candy” series, with benches like the candy-apple red one shown on pages 85 and 88. The colorful design was inspired by fashion and hot rods: “I wanted a little pop culture, a symbol of the American car culture, a souped-up hot rod.” 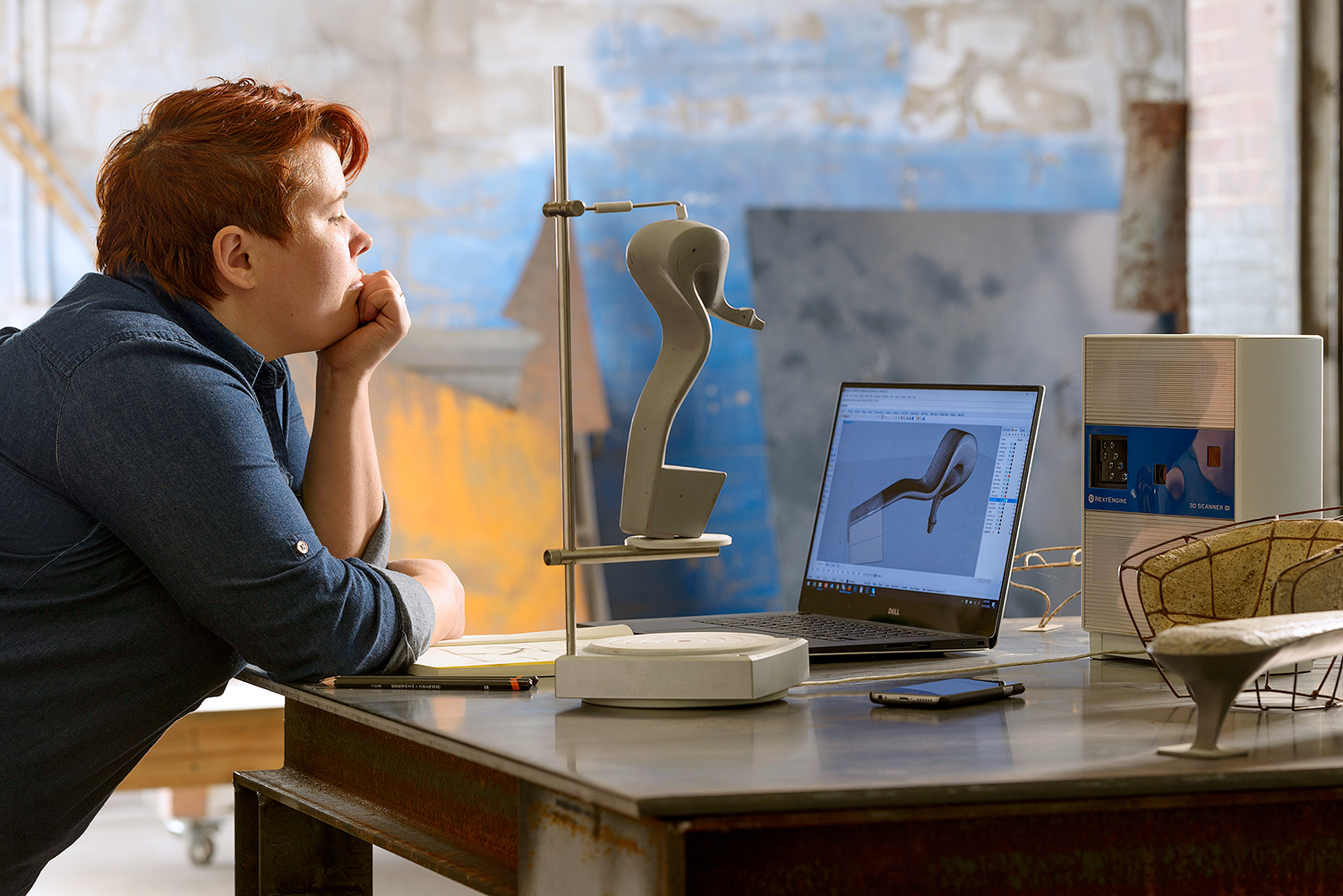 To create scale models for her furniture design and documentation, Vivian Beer uses CAD (computer-aided design) software and a 3D scanner. Because she uses abstraction as a major design element, “almost anything” can be source material, she says.

The depth of the candy-apple red color is achieved using the techniques of high-end automotive finishing, which Beer says she started using when she realized the “seductive” effect she could achieve with them. “They can make a rough industrial surface into one that you want to reach out and touch,” she says. “It is a way to draw people into the experience.”

The finishes have layers of color that make the surface semi-transparent, giving it a lot of depth. “You can see into the color underneath,” Beer says.

Treat for the eyes

In part because of the sleek finish, people sometimes mistake Beer’s sheet metal work as molded plastic or fiberglass. “It’s because of the fluidity of the form,” she says. “But as soon as you touch them, you can feel that they are metal. There is a presence and quality that is quite different.” 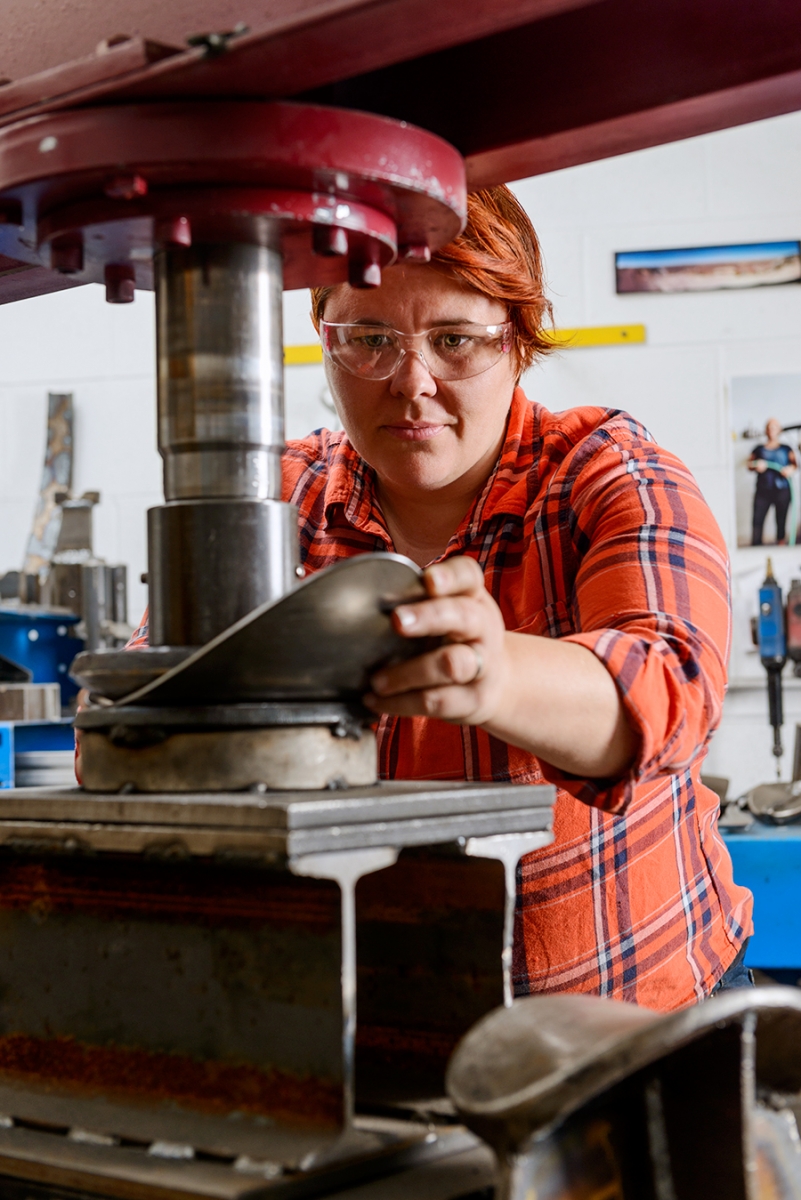 Beer designs and makes her own tools as well as the furniture. Here she forms a 1steel plate into a compound curve using her custom-built hydraulic press.

Beer does not paint her concrete pieces; there are pure pigments inside the concrete mix that she utilizes. To make concrete furniture, she first builds a metal framework. Inside that frame, there is a substructure of small bar material that has mesh tied to it. The cement, much like stucco, is troweled on and ground down to the original metal, revealing a pattern of lines and creating a finished surface in the concrete.

Expect that Beer will go beyond concrete and metal as her means of expression. “I have been developing new designs that use other material and will always be looking for what’s next,” she says. After residencies this past year at Pilchuck Glass School in Stanwood, Washington, and the Museum of Glass in Tacoma, Washington, where she worked with glass artisans to make lighting objects, she is currently finishing a number of prototypes and unique lighting pieces in her studio.

Another change she anticipates for her business: starting a new division to produce lines of furniture. Also, she wants to build community and collaborative experiences, using an internship program she’s had for five years as a starting point. “Up to now, I have mainly worked alone and the object has been all important. Moving forward, I dream of collaborative spaces and projects that I can be a part of and engineer in the coming years.”

Support Arts Education at the Currier Museum of Art 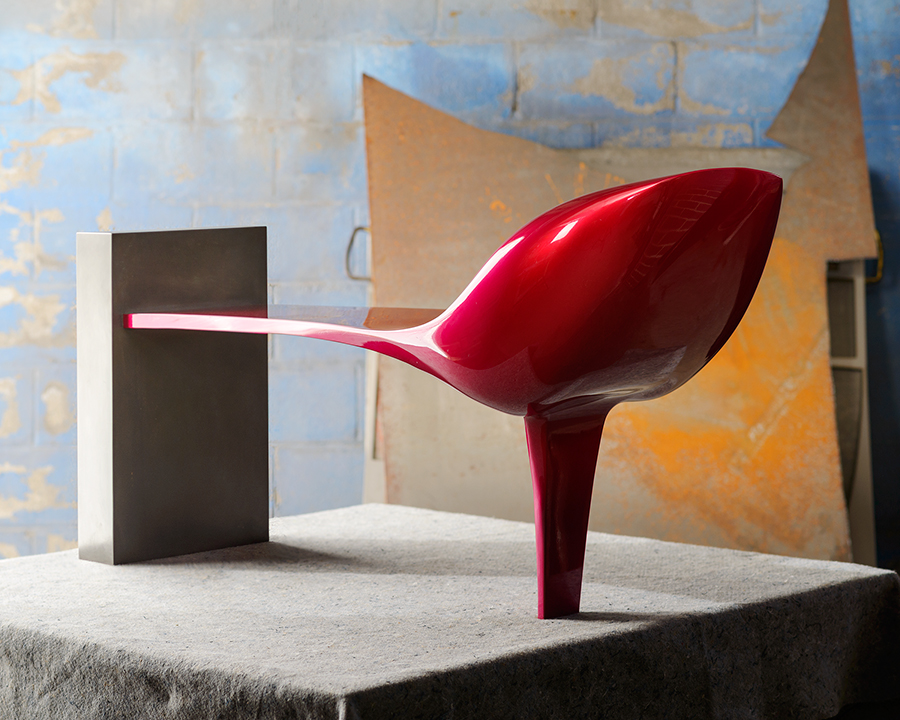 A sleek, candy-apple red bench from Vivian Beer’s “Anchored Candy” series is to be raffled off to benefit the Currier Museum’s arts education programs. Functional as seating and beautiful as a piece of art, it is valued at $10,500. Only 150 raffle tickets will be sold for a chance to win the bench; the cost is $150 each. The ticket includes two invitations to a reception, scheduled for May, where you can meet Beer, see more of her work and learn about her process. You can purchase the tickets by phone [(603) 669-6144, ext. 108], in person through Guest Services at the Currier or online at www.currier.org/heartofthearts.

The winning ticket will be drawn on Saturday, April 22, 2017 at the finale of the Heart of the Arts gala fundraiser. Raffle tickets do not include entrance to the gala, and you don’t have to be present to win.

Beer says of the “Anchored Candy” series, one of which can be seen in the Currier collection: “They are benches that counterbalance bright automotive finishes and anthropomorphic sheet metal forms with raw blocks of steel. It is furniture simultaneously about desire and structure.” 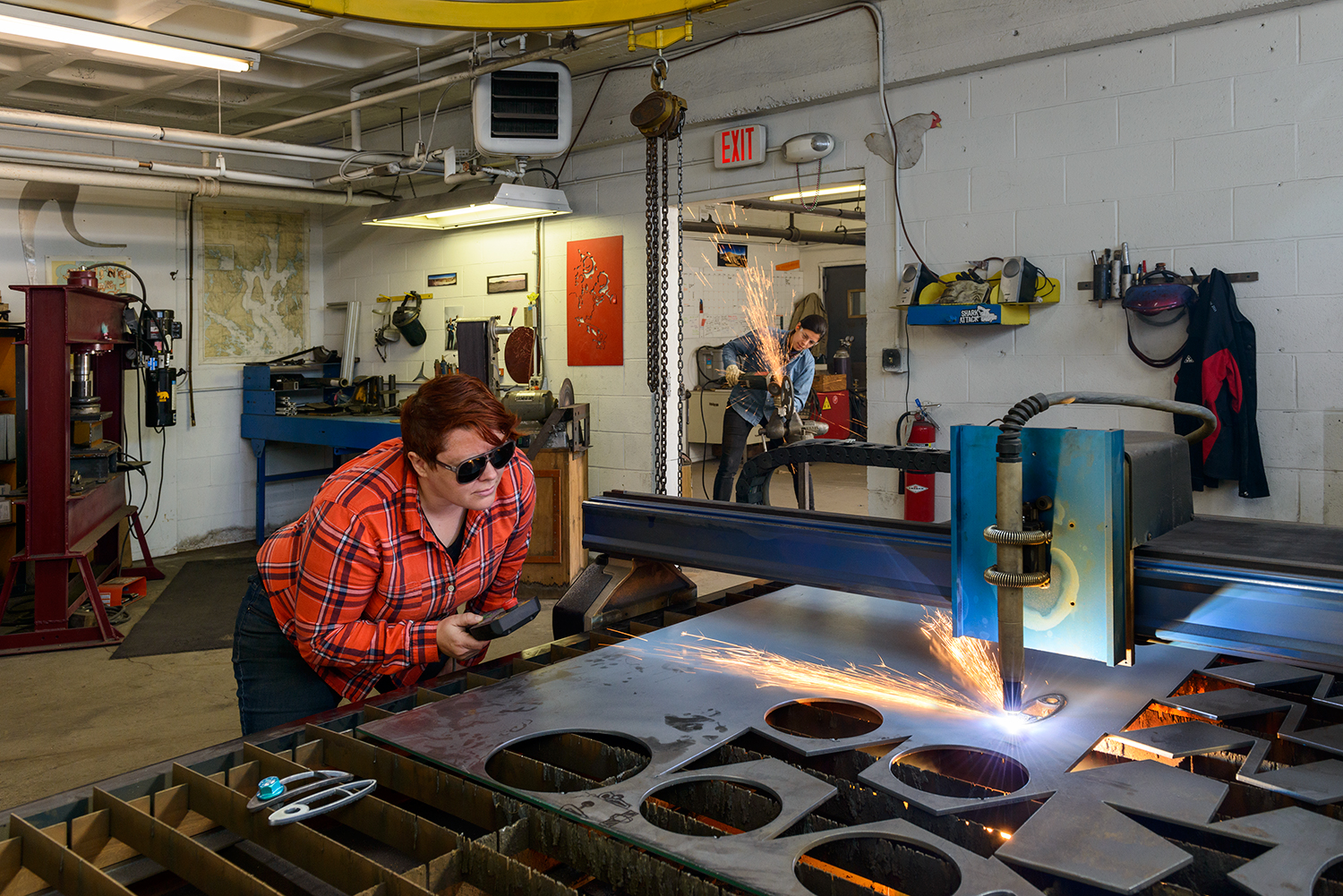 In her Manchester studio, Vivian Beer uses the rugged tools of metal fabrication to create a soft elegance that has what she calls a “come-hither look.” Working with Beer in the other room is her assistant, Olivia Juarez.
Categories: Notable Homes & Homeowners