So green, it's platinum

The only question surrounding the Lakes Region property known as Castle Rock Cottage is whether it is more fascinating because of its past (was it really an old boarding house, as the sinks in every bedroom would seem to indicate?) or in its newly renovated form.

That new form earned a LEED (Leadership in Energy and Environmental Design) platinum rating through the U.S. Green Building Council. According to Theresa Spear from the Jordan Institute in Concord-an organization that provides LEED certification to projects in New Hampshire-Castle Rock Cottage is just the sixth family residence here to earn a platinum certificate. This designation, and highest possible rating for green building practices, is a feather in the cap for architect Christopher Williams, AIA; Phillip Bennett, AIA, LEED, APBD&C; and designer Penelope Marvel from Christopher P. Williams Architects, PLLC as well as for builder Mark Flanders from Flanders & Company (both companies are based in Meredith).

technology as well as for the designers and craftsmen who can best utilize highly efficient and readily available building technologies.

"Our guess is that the original cottage was built in the 1890s," Williams explains. "It was an absolutely beautiful cottage and had gone through several haphazard renovations, but the owners wanted to add more open space for gatherings with their extended family. 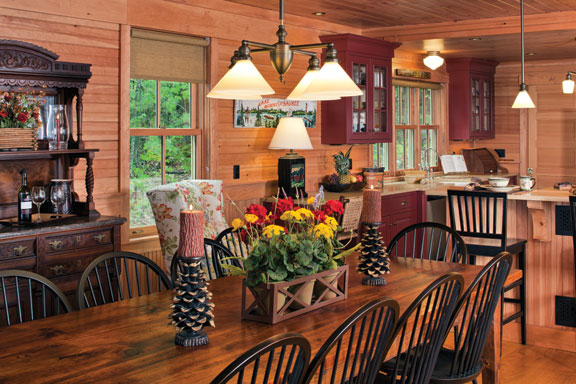 The dining area is just steps from the kitchen, thanks to the design decision that dispatched several smaller rooms in favor of an open, great-room concept on the main living level.

"They also wanted to be able to come up and use the cottage in the winter, but the central heating system that was in place just wasn't efficient enough to make it comfortable," he says. "Then, when we encountered some structural issues as well as mold problems, we had to rethink everything."

A focus on the environment

described as "the ethos of the LEED process."

"Because of the health and safety issues we were facing, the homeowners decided to demolish and replace the existing structure with a new energy-efficient home of a similar character and style. Following the homeowners' lead, members of the design team then agreed on an overall LEED standard to aim for and some realistic goals within that standard."

In the end, the design of the new home utilized the footprint of the existing structure (with provisions for additional space), but Williams and fellow architect Bennett, who is LEED certified, proudly point out that while the existing structure was being dismantled, more than 95 percent of the materials and components was recycled, with virtually no debris going into a landfill.

"Even though demolition is not a part of the LEED certification process, that was an important part of this project for us," Bennett says.

That was just part of the homeowner's wish list, which included coming as close as practicable to a zero-carbon footprint; the reduction or elimination of polyvinyl chloride (PVC) products; the use of lumber from any tree clearing on the site; and the utilization of lumber approved for use by the Forest Stewardship Council (FSC) wherever possible.

The first of those two lumber provisions is evident on the exterior of Castle Rock Cottage, where the porch and deck support posts were milled from trees on the site. Meanwhile, the exterior is sided with FSC-certified Atlantic white cedar shingles; the porch and decks were fashioned from FSC-approved Brazilian Ash." 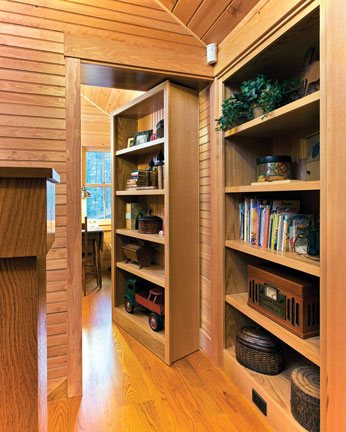 Designed for the family

The main level of the home was once a warren of small rooms, but when the renovations were complete, that main level was transformed into a single great room. "It truly is a great room-because it's all rooms combined," Williams says. "It's the living room, dining room, kitchen and family activity room all in one."

Better yet, with the walls removed and the windows greatly enlarged (and replaced with energy-efficient Marvin® windows and sliding doors), the homeowners and their guests can enjoy lake views from every vantage point on that level.

It is an open-concept kitchen equipped with the most efficient Energy Star appliances-including two GE ProfileTM ovens and a warming drawer for large family gatherings-plus eco-friendly CaesarStone® natural quartz countertops and custom-made FSC cabinets from Young Furniture of Bow.

As with most families, when the homeowners are not gathered in the kitchen, they're likely to be found in front of the fireplace. At Castle Rock Cottage, the old, inefficient, open fireplace was dispatched in favor of a highly efficient, Environmental Protection Agency-approved wood-burning fireplace box-set into a new, fieldstone hearth-that can heat the house during power outages with the use of a small, portable generator. 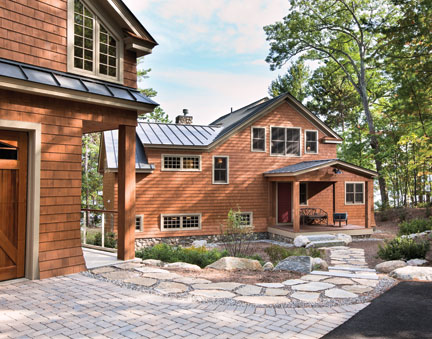 As part of the project's goal to meet or exceed LEED standards, the design team wanted to install a mechanical system to provide for all the home's heating and cooling needs without the use of carbon-based fossil fuels on site (withthe exception of that backup generator in periods of power outages).

The answer was an Arcadia heating system based on a relatively new, low-temperature heat pump built by Hallowell International of Maine. This system, utilizing a three-stage process, can cope with heating needs even when outdoor temperatures dip as low as 15 degrees below zero on the Fahrenheit scale. The system has stated efficiency factors that run between 200 percent and 400 percent, and is run entirely on electricity.

And speaking of electricity, despite the design team's best efforts, the homeowners' stated ideal electrical system was one wish not granted.

"The owners had hoped to provide all their electrical needs with a photovoltaic array, but, due to tree cover, the desire to not destroy the landscape of the property and the relatively low conversion rate of today's photovoltaic panels, it was deemed not suitable at this time," Bennett says. "However, the infrastructure was put in place for the future inclusion of both a photovoltaic system and solar hot water system in hopes that those efficiencies would soon improve."

Still, for all of the high-tech elements that earned a LEED platinum rating, the home is charmingly cozy-a word that contributing designer Marvel is always happy to hear.

"We were going for cozy," she says with a smile. "That's why none of the rooms is over-decorated. These are not ostentatious clients, and we tried to evoke the feeling of the original home, which they loved. Part of that was a well-stocked kitchen pantry with open shelving in anticipation of the next family meal or gathering. It can be the little things that capture the feeling of the original home, like the pantry or the secret room."

Yes, Castle Rock Cottage has a secret room (it's on the first level landing of the wide staircase leading up to the second floor-see the top photo on this page), and if the child in you is still alive, you should revel in this bit of whimsy. That innocentlooking bookcase on the left is actually a portal to a world of imagination, where desks, easels and board games await.

On that same level is the master bedroom with a full bath, one that is equipped with low-flow, dual-flush toilets. "One for minor flushing and one for major flushing, if you know what I'm saying," Flanders says. The whole space is illuminated by energy-efficient sconce fixtures with compact fluorescent bulbs.

"There was also a second sink right in the master bedroom," Flanders adds, "and one in every other bedroom as well. The family thinks the building might have been a boarding house at one time. They liked the idea of keeping the existing sinks, but we couldn't pull it off. We had to go with new ones."

Up half a flight more-the three-story home actually has five levels-are four large bedrooms, "and it feels very much like it did in the original home," Williams says, "right down to the diagonal jog in the hallway."

Contained within the aesthetic beauty of the home are the exquisite details of green building. For instance, the sheetrock walls in the bathrooms are faced with Fiberglas® as opposed to paper,

making them resistant to mold. The home's elegant exterior foundation is charming fieldstone, but on the inside, it is composed of pre-cast concrete known as Superior Walls®, which uses just 30 percent of the concrete in poured foundation walls. Even the framing, the very ribs of the home, came as a pre-built, panelized package of FSC-certified lumber. Plus, by framing the home twenty-fourinches on center-as opposed to the traditional sixteen inches-the William C. Wallace Prefab Corporation of Danbury was able to save more time and lumber.

Even the two-car, detached garage is in keeping with the overall goals of the project, since "you get points from LEED because there are beneficial air quality issues with a detached garage," Bennett says.

If detachment is a goal, the open-concept in-law apartment above the garage could serve as a refuge from family, but the overarching goal of this project-beyond the environmental considerations-was to enable this extended family to gather year round at Castle Rock Cottage.

The colorful setting is right out of On Golden Pond, and it comes with a platinum LEED certificate to boot.