Falling for a house

Built in 1812, a stately brick Federal in Walpole proves irresistible to a woman and her family from Manhattan. 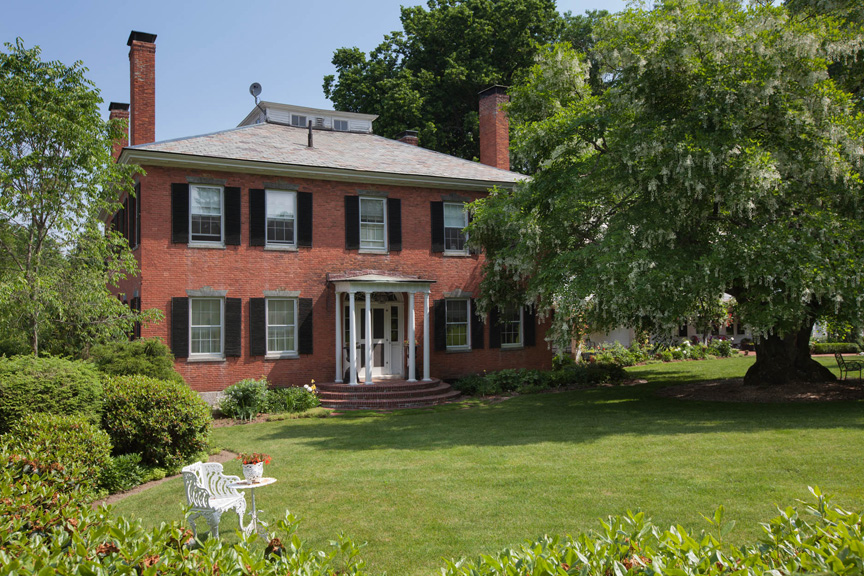 There's no escaping Cupid's arrow, and Vicki Gohl and her husband Matthias were struck one Colum­bus Day weekend in Walpole. The couple had such a wonderful visit (and the fall col­ors were so exquisite and the town so pic­turesque) that by that Monday, they were looking for property to buy there.

The Gohls came to Walpole in 1994 at the invitation of Vicki's colleague, Dayton Duncan-Vicki was working as a visual re­searcher with the award-winning writer on two of Ken Burns's acclaimed documentary series, The West and Jazz. Duncan began working with Burns in the 1980s (he was a consultant for The Civil War, which aired in 1990) and has been collaborating with Burns, who also lives in Walpole, ever since.

"In addition to our loft apartment in New York, we thought we wanted a house outside of Walpole on lots of acreage with a barn to convert into a studio [for Mat­thias, who is a musician] and room to build a place for my folks," Vicki says. "Anew building or renovation seemed like an okay idea, but we just never considered an his­toric home."

After looking at more than a half-dozen houses that fit the bill, Vicki went to see the Knapp House. The classic brick Federal was built in 1812 by Josiah Bellows II, who made his fortune in agriculture; carved in the sill of a first-floor window is "BUILTMDCCCXII."

"Brick houses in New Hampshire outside Portsmouth were rare until 1820," says ar­chitectural historian James L. Garvin of Con­cord, "and they denoted the wealth of the homeowner."

by Asher Benjamin
Originally published in Boston in 1806; reprinted in 2009 by Dover Publications

The Historic American Buildings Survey: The Knapp House
Published by the National Park Service in 1959

Even so, the Knapp House was every­thing that Vicki and Matthias didn't want: it was big, it was in town and it needed a lot of work. "But I knew that this house would be perfect for three generations," Vicki says, "because the house has two wings. I also loved the way the house is turned away from the road, which meant it would be safe for children to play outside."

In January 1995, Vicki's parents, Barbara and Austin Hunter, came to visit Walpole. Barbara was in the process of retiring from the second successful public relations company she owned after she sold her first to Ogilvy & Mather; Austin had already retired. "We all fell in love with the house," Vicki says. In March, the family's offer was accepted and the house was theirs.

The history of the Knapp House

After Bellows built the house, it remained in his cousin's family, the Knapps, until 1927, according to the History of Walpole, New Hampshire, Volume 1, published in 1963. Much of the house was in origi­nal condition, and although the carriage house wing was not, the wood of its arches and keystones was original, noted The His­toric American Buildings Survey, which was compiled by the National Park Service in 1959. The survey also said the house's trim and hardware were "almost all original"; the first floor had original Dufour wallpa­per called Monuments de Paris; and the lilac hedge running from the house inspired Louisa May Alcott to write Under the Lilacs (Alcott's father moved the family from Bos­ton to Walpole at one point).

Garvin says the Knapp House has all the hallmarks of a still unidentified local master builder who worked in Walpole in the early 1800s and was influenced by builder-architects such as Asher Benjamin or Alexander Parris.

"This house is a very urbane building," Garvin says, "and it shows the strong influ­ence of architect and author Asher Benja­min. He lived across the Connecticut River in Windsor, Vermont, where he advertised New England's first school of architecture in 1800."

Benjamin's book The American Builder's Companion became the most widely used resource for architectural style in the early nineteenth century, and his work influ­enced the design for residential and public buildings throughout New England. "Any­one who wanted to build a home would refer to this book," Garvin adds, noting that the Knapp House's balustrade ends in a spiral and columns of the mantelpiece in the parlor rest on little balls, details taken directly from the book.

"Taking on this stately, historically interest­ing home was so compelling," Vicki remem­bers. "Both my mother and I have always been interested in history and design. But neither of us had ever dealt with the his­torical issues of a renovation."

While the home had seen some changes over the years-the Bunkers, who owned the house in the 1960s, turned the barn into a three-car garage-no one had paid much attention to structural issues. "These are such important fixes, but no one ever sees these things," Vicki says.

Helping the Gohls and Hunters with those fixes was builder Mark Grieco from Saxtons River, Vermont-he worked on the house off and on for ten years. "The house was in serious disrepair when I started," Grieco says. "Things were rotted, cracked, settled." His first order of business was to mitigate the structural issues by adding beams, replacing sills and shoring up the structure.

By the time Vicki and Matthias moved in to the house in April 1996 (one month before their first son, Samuel, was born; his brother, Rudi, arrived in October 1997), the kitchen had been completed, the house was leveled and the basement stairs were moved. "The floorboards had also been taken up, since they were painted with a lead-based paint," Barbara says.

Some pieces had to be repaired and others replaced. The primary source for pine wasn't far away-Grieco used the eighteen-inch-wide, first-cut boards from the attic. Those boards were taken up, moved downstairs and replaced with ply­wood after insulation was added.

Grieco says all the fireplaces needed work. "We pulled out and cleaned all the hearthstones and relined all the chimneys. Fortunately, the brickwork inside was in good shape."

He adds that most of the walls were stripped from inside; where possible, insulation was added between the brick and plaster.

The jewel of the restoration

The room that required the most effort and resources was what Vicki and Barbara call the Music Room. "One of the things that first drew us to this house was the Realtor's list­ing that boasted of early nineteenth-century wallpaper," Barbara says. She notes that a re­production of this wallpaper is in the Ameri­can wing at the Metropolitan Museum of Art in New York. In the early 1900s, the same paper inspired the antiquarian Wallace Nut­ting to use the Knapp House as the setting for two of his immensely popular, hand-colored "colonial" photographs, (see photo on the right) several of which Vicki and Barbara have displayed in the parlor.

According to T.K. McClintock, of Studio TKMLtd. in Somerville, Massachusetts, who restored the wallpaper, Monuments de Paris was originally produced around 1812-1814 by the manufacturer Dufour of Paris. It was printed with woodblocks using opaque mineral pigments and a tempera binder on thirty rolls of paper that were 193/8 inches wide. Each roll was made of individual sheets of handmade paper that were 16½ inches by 193/8 inches and adhered togeth­er at the edges. Using overlapping seams, the paper was mounted on all four walls directly to the plaster without a border or a lining of fabric or paper.

"The installation necessitated ad­justing some scenes and patching areas adjacent to moldings that would have oth­erwise been covered had borders been used," McClintock says. "The registration of the design between rolls is imperfect, a characteristic that results from the expan­sion and contraction of the paper during mounting."

McClintock explains that the wallpaper was removed for conservation to address large areas of separation, tears, losses and discoloration from exposure and water damage. The individual rolls were washed; consolidated; reinforced by lining with Jap­anese paper using wheat starch paste; and painted to complete small areas where the design was missing, using photographs as the guide.

After the restored wallpaper was in­stalled, McClintock recommended add­ing another wallpaper on the lower parts of the walls. To complement the scenes, he suggested that paper show balusters. While Vicki and Barbara agreed with the concept, they couldn't find a paper they liked so they hired two painters to do an appropriate trompe l'oeil rendition of the balusters. "In order to avoid half columns at the corners, this became quite a mapping project," Grieco says.

With all the big projects behind them, the Gohls and Hunters have a lot to celebrate in 2012. Ruggles & Hunt-Vicki's empori­um in Walpole for clothing, gifts and home furnishings-will be open for nine years May 1. The Knapp House turns two hun­dred years old, while Austin will be ninety and Barbara eighty-five (both were born on July 14).

"What a wonderful place for us," Bar­bara says. "With the two wings, there are so many venues that we never tire of the space."

Garvin says with its brick and detailing, the Knapp House is one of the great hous­es of the Connecticut River Valley. "The Gohls and Hunters are such wonderful cus­todians of this house-Ialways have hope that a house like this would fall into such caring hands."