Falling for The Fells in Newbury

Feast your eyes in late September at this renowned estate, where the outstanding gardens are a project of The Garden Conservancy.

Autumn in New Hampshire is a magical time of year. Lake Sunapee, a gorgeous  region at any time of year, is especially beautiful in the fall. Off the beaten track in Newbury is The Fells, once the summer home of three generations of the Hay family.

John Milton Hay was Abraham Lincoln’s private secretary in 1860, and later became U.S. secretary of state for Presidents William McKinley and Theodore Roosevelt. To escape the summer heat and humidity of Washington, D.C., and the pressures of the White House, Hay often visited New Hampshire, where he fell in love with the Lake Sunapee area.

In the late 1800s, farming in New Hampshire was in decline but tourism was on the rise; the state was actively promoting the re-use of abandoned farms as summer homes for the wealthy. Hay bought the Rowe Farm in 1885, and had a retreat built there for friends and family. He eventually bought seven more old farms near Lake Sunapee, amassing more than one thousand acres along the eastern shore. He named his estate The Fells, a Scottish term for rocky upland pastures.

On October 1, 1904, Hay wrote in his diary: “I have never seen such splendor in the woods as today. Around the house the maples are blazing in every shade of color from scarlet and orange to pale yellow and delicate pink, while the beeches, birches, ashes, and poplars add their varying shades to the chorus and the evergreens form the grave background of the marvelous picture.” 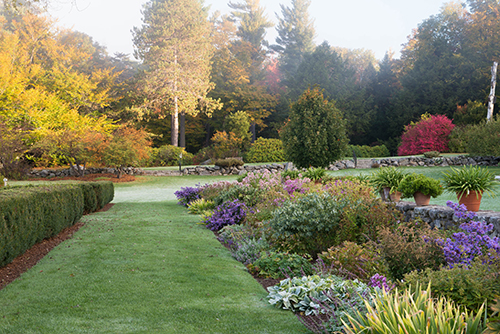 The leaves are turning to their colorful autumn shades as the early morning mist rises near the house.

Hay’s youngest son—Clarence, an archeologist and curator of the American Museum of Natural History in New York—eventually inherited the estate, appropriately so since he reportedly loved The Fells the most among his siblings. When Clarence married, he and his wife, Alice, began making great improvements to the property. They transformed the original cottage into a grand, twenty-two room, Colonial Revival-style home and set to work on the gardens.

While Clarence was a student at Harvard, he took a class in landscape architecture taught by Frederick Law Olmsted Jr., whose principles inspired the first formal garden Clarence created at The Fells. Originally a sunny walkway joining two stonewalled rooms, the garden has changed since 1909 to a shady, secret space surrounded by tall evergreens, rhododendrons and azaleas. Ferns and pachysandra thrive in the shade of tall hemlocks. Paths paved with stone intersect where plantings of glossy ginger, painted ferns, pulmonaria, actea, epimedium and tricyrtis among other plants are repeated in four long beds. Large pots of annuals stand at the steps down to a boxwood-lined walkway that leads to a pool with a fountain and bronze statue of a boy with a turtle. A sizeable dogwood is on the right, and the pool is surrounded with ferns, primroses and fuchsias. Climbing hydrangea hugs the wall. The statue of Pan, Greek god of the woodlands, is still in place and the curved stone wall, called an exedra, gives the garden the feeling of an ancient ruin.

A pine-needled path eventually leads out of the old garden past a tall smoke bush to an open field in front of the house where sheep once grazed. Here, visitors can choose to follow the heather-lined path to the fairy village (where children are encouraged to build their own fairy houses) or head through the milkweed-filled monarch meadow (an official way station for migrating butterflies).

From the field, glimpses of the lake and the distant hills beyond can be seen through the trees; one of several hiking trails on the property begins here. There are more than thirty pieces of sculpture placed around the grounds as part of this year’s Art in Nature display, which runs through October 13.

On the wide, terraced lawn in front of the house is a one-hundred-foot-long perennial border originally built in 1926. Reminiscent of a fragrant English garden, it was restored in 1993 with the help of old photographs. The space is filled with pink and purple asters, phlox, catmint and dark purple salvias that are all alive with bees on a sunny fall morning. Peony bushes, baptisia, delphiniums, iris, lamb’s ears and ladies mantle have finished blooming for the year, but lend their interesting foliage and structure to the garden.

Opposite the border is a long yew hedge. Pots of agapanthus line the stone retaining wall behind the border and mark the wide stone steps to the top terrace, where containers of annual flowers provide color all season long.

The sixty-foot-long covered veranda provides a welcome resting spot with inviting chairs. It is easy to imagine John Hay with his friends and associates—people such as Henry Adams, Rudyard Kipling, Teddy Roosevelt and Henry Cabot Lodge—enjoying the refreshing air and views of the lake.

Just off the dining room, Clarence and Alice had a formal rose garden built in 1924. Once a display garden for hybrid tea roses—some of the originals still grow here—this space is now home to hardy, disease-resistant shrub roses; unusual annuals, such as purple lisianthus, green nicotiana, apricot foxglove and dark purple angelonia; and tender perennials, such as hibiscus and pale pink mandevilla. Wisteria grows next to the house, and morning glories and clematis twine up two trellises.

The most impressive feature of this garden is the high stone wall with a goblet-shaped fountain built into an arched niche. Water for the fountain is gravity-fed from a brook high on a hill across Route 103A from the estate. This high wall is blanketed with climbing hydrangea and supports the espaliered pear trees Clarence planted.

Because the garden is surrounded by a dense yew hedge and high stone walls that create a warming microclimate, the plants are sheltered from early frosts and continue to bloom into October.

Step through an opening in the garden wall and catch sight of the lake before heading down the stone steps to the rock garden. Started in 1929, this garden was Clarence’s pride and joy, and he worked on it for forty years. He hired Italian stonemasons with draft horses to haul rocks from other parts of the property and build an extensive network of paths. Clarence created specialized microclimates—nooks and crannies—for the different plants he had gathered from around the world. Water flowing from the pool in the rose terrace forms a natural stream that runs through the rock garden to a small lily pond edged with azaleas and Japanese iris at the bottom of the hill. Eventually, the rock garden, built in a natural dell, covered one-third of an acre.

In 1934, Clarence hired an alpine flower specialist, who trained at Kew Gardens in England, as his gardener. Clarence maintained meticulous records, keeping photographs and a card file with information about every plant he grew. With more than six hundred species and cultivars of rock garden, native and alpine plants, this file greatly helped in reclaiming and renovating the garden in 1996. 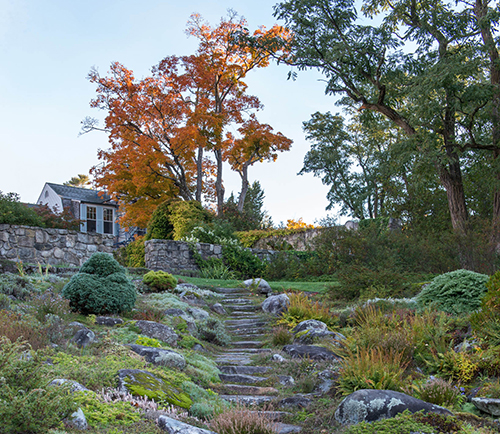 Clarence Hay worked with stonemasons to relocate rocks from the property to create the rock garden and make these stone steps. This garden is home to many native and rare alpine plants.

Thelma Hewitt, president of The Fells chapter of the North American Rock Garden Society (NARGS), says: “This is one of the best public rock gardens in New England. Clarence began building it at a time when the rock garden movement was bursting forth in New England. He started by collecting natives such as bunchberry and tiny Vaccinium vitis idaea minus, and later brought in plants from all over the world. He was one of the founding members of the American Rock Garden Society, and the garden at The Fells was one of the earliest, significant rock gardens in the country. To this day, rock-gardening
enthusiasts from across the globe come here to see Clarence’s garden.” In fact, fans of rock gardening will gather at The Fells this fall, as NARGS is planning its quarterly meeting there on October 29, which includes a 2 p.m. program with Mike Kintgen, senior horticulturist at the Denver Botanic Gardens.

The heather bed, which is located at the top of the hill next to the rock garden, is also a garden of significance. Capitalizing on the acidic soil, Clarence first planted six common heathers (Calluna vulgaris) in 1929. They grew so well that, two years later, he added eighty-five more. Winning acclaim as the largest heather bed in the Northeast, this space thrived until harsh weather in 2005 killed 95 percent of the plants. Thanks to a grant from the Morton Foundation, volunteers from the North East Heather Society worked with garden staff to replant the garden in 2007 and 2008 with twenty varieties of heather. The members of the Heather Society help maintain the heather bed by spring shearing the plants each year.

Bring home a piece of history

After visiting the estate, be sure to stop at the plant stand by the gatehouse and check out the plants for sale. Many are descendants of the original plants from Clarence’s day, while others are the same varieties raised here specifically to replace missing plants or are representative of plants Clarence used.

Susan Damon, nursery manager at The Fells, is responsible for raising the plants used in the landscape and the ones for sale. “We have differentiated a group of ‘Signature Plants’ that we feel are historically significant to The Fells, either because they grow in the gardens here or because they reflect the feeling of The Fells in its early days,” she says.

The Fells is located off Route 103A in Newbury. The grounds and trails are open daily, year round, from 9 a.m. to 5 p.m. (dawn to dusk for members). This fall, the main house is open weekends and holiday Mondays from September 6 through October 13. The website has fall program listings. Admission is $10 for adults; $8 for seniors and students; $4 for children age six through seventeen; and children younger than age six are admitted free of charge.