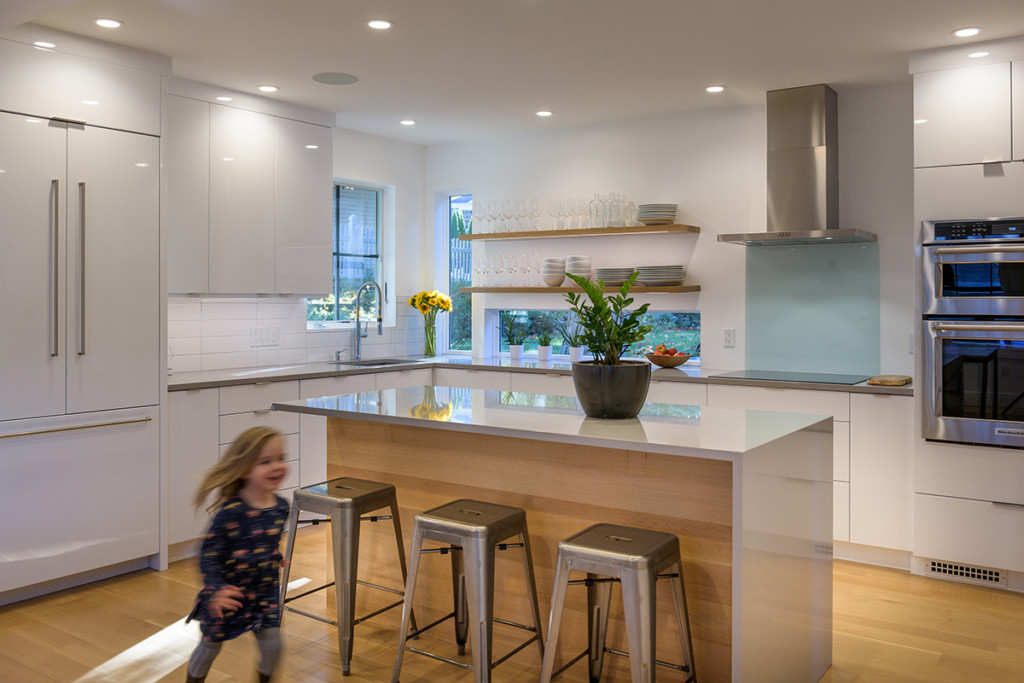 With this open design and bare floors, a child’s short sprint is carefree.

From the little balcony off their shared third-floor home office, Brandon and Tara Seppa can watch Portsmouth’s New Year’s Eve fireworks. In warmer weather, Brandon chats on the phone with colleagues while gazing out at the Portsmouth skyline. For the Fourth of July with their two little girls in tow, the Seppas stroll down to the baseball field to join friends and neighbors to ooohh and ahhh at explosions of color in the night sky. In fact, the Seppas walk everywhere: to the playground, library, school, farmers’ market, outdoor pool, skating rink, coffee shops and restaurants, as well as to the city’s many cultural venues, such as Strawbery Banke, Prescott Park and The Music Hall.

“For a town of twenty-one thousand people, there’s a lot to tap into,” Tara says. “We love that the town has a heartbeat in its center. There’s a great sense of community.” And, since Brandon and Tara travel a great deal for work, the proximity to major transportation and business hubs—such as Portland, Maine, and Boston—is critical.

After living for several years in the Czech Republic and then France, the Seppas, who both work in high tech, came back to the United States to settle down. Brandon, who grew up in Salem, had discovered Portsmouth while going to the University of New Hampshire. Tara, who grew up in Indiana, had lived in Chicago. For their next step, they chose Portsmouth, and made a leap of faith for both their family and their careers.

While still in Europe, they started looking at houses for sale in Portsmouth. And then their realtor sent them a video of one on the market. They sensed it was right and bought the house sight unseen.

“When we came back from Europe,” Brandon says, “we drove straight to the lawyer’s office, signed the papers and then went to see what we had bought.” 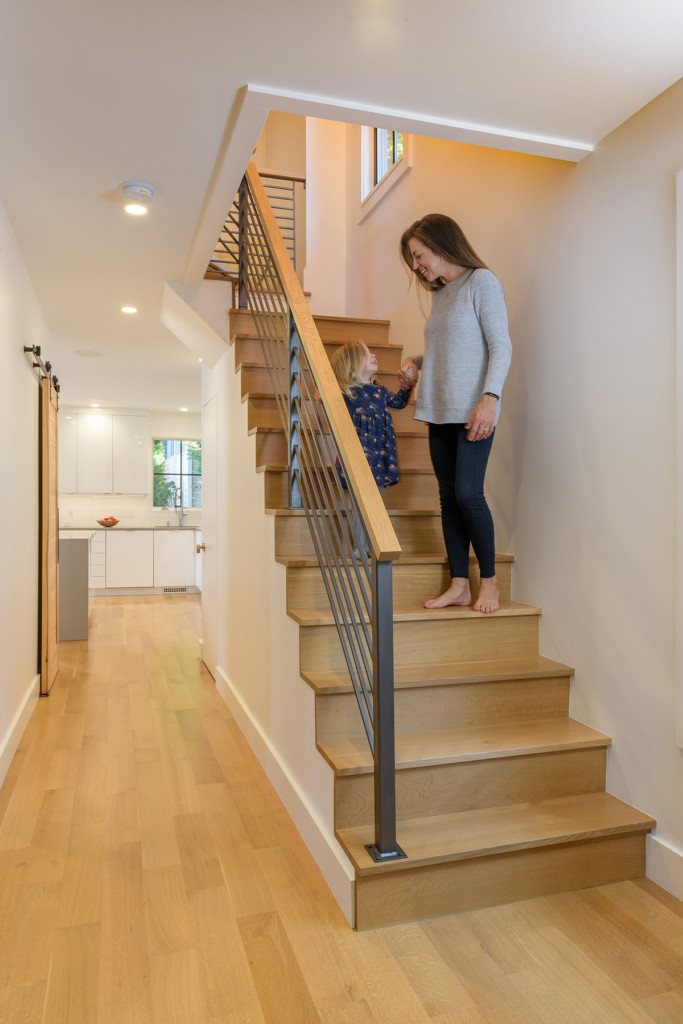 “We decided to live in the house for a year to get the feel of it,” Tara says. “We did do some basic updates. We painted and replaced some doors, and we decided to put our office on the third floor.”

“Our aesthetic wasn’t really developed yet,” Brandon says. “In the Czech Republic, the décor is really minimalist, and we connected with it. A desk, a lamp, no clutter gives me clarity of mind. Actually, there were a couple of pivotal moments for us.”

Also on the Seppas’ inspiration list is the ubiquitous Swiss railway clock designed in 1944 by Hans Hilfiker. It’s now licensed for use on some Apple products. The clock famously hesitates just before the full minute—all Swiss trains leave on the full minute. “That clock!” Brandon says. “It really romanticized train travel.” For Father’s Day recently, Tara gave Brandon a residential model that now hangs in their kitchen.

Their full introduction to mid-century modern came while visiting friends in Austin, Texas. “Their taste is very eclectic, but they also had a minimalist approach,” Brandon says, “and we both really liked it.”

“Actually, we like all kinds of homes,” Tara says. “We have a friend who has a shabby chic approach, and we really appreciate and enjoy how she put it all together. But minimalist design just works for us.”

Creating their own space

Working with Nick Gray, of Nick Gray Builders LLC in Somersworth, the Seppas made careful, sometimes very subtle decisions with their design
approach; details are critical. Tara and Brandon opted to keep the outside face of their New Englander in the character of the houses in the neighborhood. Yet, their house now does have a very pleasant, crisp look. Gray says the cement siding, which is not as thick as wood clapboards, gives the home that smoother overall look. Plus, when properly maintained, the cement siding lasts a long time. For the roof, the Seppas chose a standing seam metal roof, which also gives the house clean lines and is very durable.

Inside for the flooring, the Seppas chose white oak. “Their flooring is a bit wider than standard flooring,” Gray says. “It’s rift and quartered from logs, and it’s all the same five-inch width with a flat, water-based finished.”

The effect is uniform, but there is variation, given the warm, tawny shades of the wood’s grain. This wood is actually used throughout the house: for the floating shelves in the kitchen and for an asymmetric look on the kitchen
island, which has a waterfall counter on one side. Making the waterfall counter work is actually a bit of a trick. “First, you have to polish both sides of the stone,” Gray says. “And then you have to finish the corner at a very precise forty-five-
degree angle.”

Kitchen designer Scott Purswell, of Dovetailed Kitchens in Portsmouth, worked closely with the Seppas and Gray. “That waterfall counter gives the kitchen a bit of drama,” Purswell says. “And the white oak throughout has a gentle anchoring feel and warmth to it.

Purswell applied his extensive design experience to the Seppas’ kitchen. “Light is so important in a kitchen,” he says, and goes on to describe the particulars of Tara and Brandon’s space. “I’ve done backsplash windows before, but adding a long narrow window in the corner … I believe it was Tara’s idea, and it was a stroke of genius. I think it’s beautiful. It’s intuitive when you see it now.” 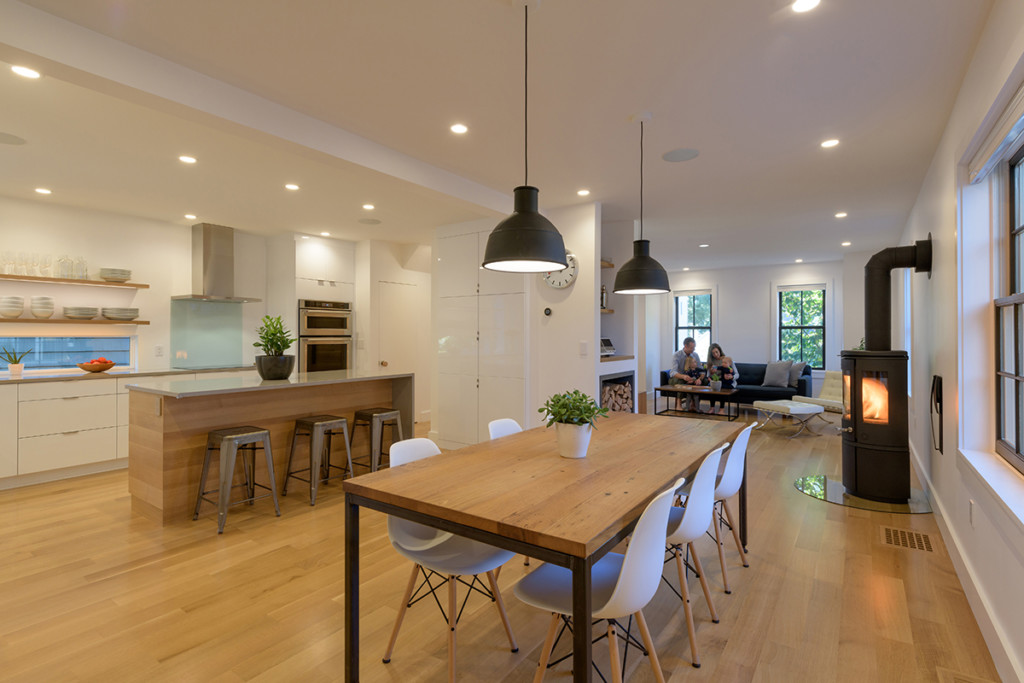 Other aspects that Purswell helped to develop include the large food pantry that is seamlessly incorporated into a wall near the kitchen island. The floating shelves are underlit with LED lights. The cabinetry’s stainless-steel, bar hardware maintains the kitchen’s clean lines, as do the tab drawer pulls. The induction stove has a glass backsplash.

“We used simple subway tile and white grout, which give the sink’s backsplash a monolithic feel,” Purswell says. “I like the pendant lights over the dining table that Tara and Brandon picked out. The lights are black silicone, and you can just squish them. What’s more, the materials used to create this kitchen are affordable.

“The Seppas are just wonderful clients,” Purswell says. “They have superb taste, but listen, take advice and let everyone have input.”

Gray concurs: “They were a real team and would really review ideas, and then they were decisive.”

The home’s furnishings are spare and simple. The reclaimed chestnut and steel dining table was custom made. One of Brandon’s favorite features is the Danish woodstove on a glass pad. “I love chopping wood,” Brandon says, “since my work is not so physical.”

Brandon and Tara are also fans of vinyl records and have a turntable manufactured by the Massachusetts company U-turn Audio; the machine requires one to change a band to change the speed. The soundtrack for the Seppas’ lives at the moment includes Ella Fitzgerald, Louis Armstrong, Pearl Jam’s Ten and Journey (Tara is a self-described “eighties kid”).

Brandon and Tara do want to add more decorative items to their home. Recently they became entranced with the work of local artist Don Gorvett. “We just wandered into his print shop,” Brandon says, “found a print we love, and we had a wall for it.”

The Seppas’ approach is holistic; it’s the antithesis of television reality shows that stage “the big reveal.” By contrast, the Seppas’ home will develop slowly, over time, and definitely, it will remain minimalist.

Books—especially children’s books—are an exception to the minimalist concept at the Seppas for the time being. Their collection includes titles such as Good Night New Hampshire and Good Morning Piscataqua.

What matters most to the Seppas is raising their family in a healthy community. “We really designed our house around this neighborhood,” Brandon says. “For example, on Saturday mornings, we often take the kids to the playground that’s just a short walk away.”

Tara adds: “When we go to the library, the market, our children’s school or downtown coffee shops, we always run into people we know. There are lots of opportunities for informal conversations. It’s a great community.”