Inspired by the natural world, blacksmith David H. Little creates exquisite furnishings and decorative items from his shop in Meredith. 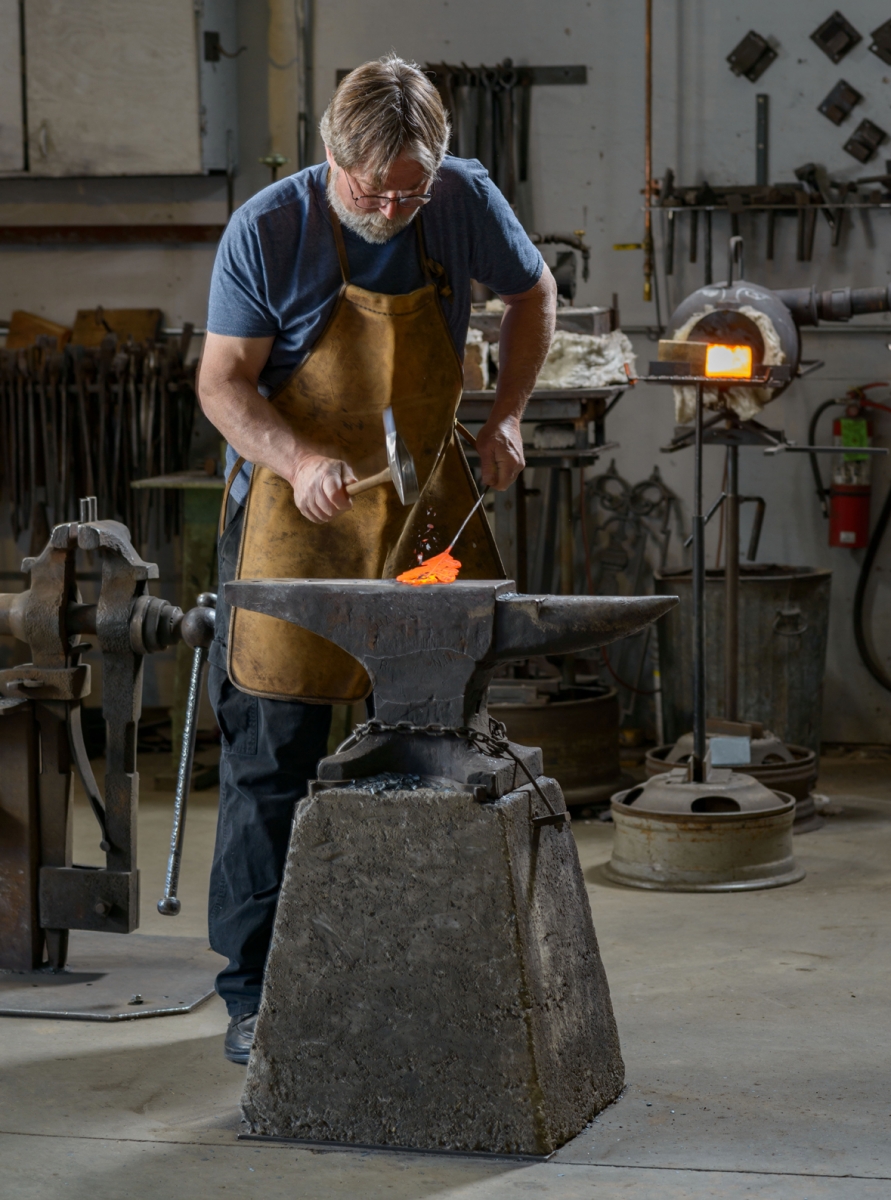 In his Meredith studio called Winnipesaukee Forge, blacksmith David H. Little takes a red-hot oak leaf from the forge and shapes it on his anvil.  This leaf will go on a fireplace screen in a home on Lake Winnipesaukee.

For more than three thousand years, blacksmiths around the world have been producing functional work—making and repairing iron tools, hardware and other objects. But interest in the aesthetic possibilities of the craft has been growing since the early 1970s. In 1973, the Artist Blacksmith’s Association of North America was formed with twenty-seven members. By 2013, it had ballooned to nearly four thousand members.

One of those members is David H. Little. He first fell in love with metalsmithing when he was nine years old at Camp Deerwood, a summer camp for boys on Squam Lake. After that, he learned more about working with metal at Marlborough College in Vermont and the Haystack Mountain School of Crafts in Deer Isle, Maine. Since 1982, Little has been making signature pieces at his Meredith studio called Winnipesaukee Forge. You can see more of his work at the upcoming League of New Hampshire Craftsmen Fair in Newbury, where he’ll have a booth as well as a piece in the Living with Craft exhibit.

New Hampshire Home [NHH]:  What drew you to blacksmithing?

David H. Little [DL]: My first exposure to old ironwork was at my grandparents’, Bertram K. and Nina Fletcher Little’s, homes in Massachusetts. They were well-known collectors of American folk art and decorative arts. Their summer home in Essex, called Cogswell’s Grant, is now part of Historic New England and one of the few places where you can visit such a collection of decorative arts in the home for which it was assembled. Visitors can see the property, which is now a working farm and house museum, through October 15.

NHH: How did you wind up in  New Hampshire?

DL:  My great-grandfather, David M.  Little, was a silversmith who built a camp on Lake Winnipesaukee. My  family summered there and, when I  was a boy, I went to Camp Deerwood on Squam Lake. The camp had a  blacksmith and forge, and I was soon hooked. I discovered my great-grand-father’s forge and anvil at the Meredith property, as he also did boatbuilding and repair, and began to use those tools.

When I was in my early twenties, my grandfather passed on his father’s trademark silversmithing stamp with which he signed his work. It says ”Little” in an oval line. I also inherited some of my great-grandfather’s tools.

NHH: When did you begin doing  blacksmithing full time?

DL:  I opened my studio in 1982 and began making pieces for smaller shows and also doing reproduction work. That same year, I became a juried member of the League of New Hampshire Craftsmen and had a booth for three days at the fair in Newbury. I sold nearly everything I had brought with me! The next year, I did the full nine days at the fair and have been doing that ever since.

NHH: What has influenced your aesthetic?
DL:  I studied art history, and was influenced by the American Arts and Crafts and Art Nouveau movements. The ironwork at the Metro and Notre Dame in Paris as well as the gates you see at homes in the Back Bay of Boston—these are all places that influenced me. I grew up in old houses in Wellesley, Massachusetts, and my grandparents collected American decorative arts, so I’ve always been interested in door latches, hardware, fireplace andirons and other pieces. I also love old tools. 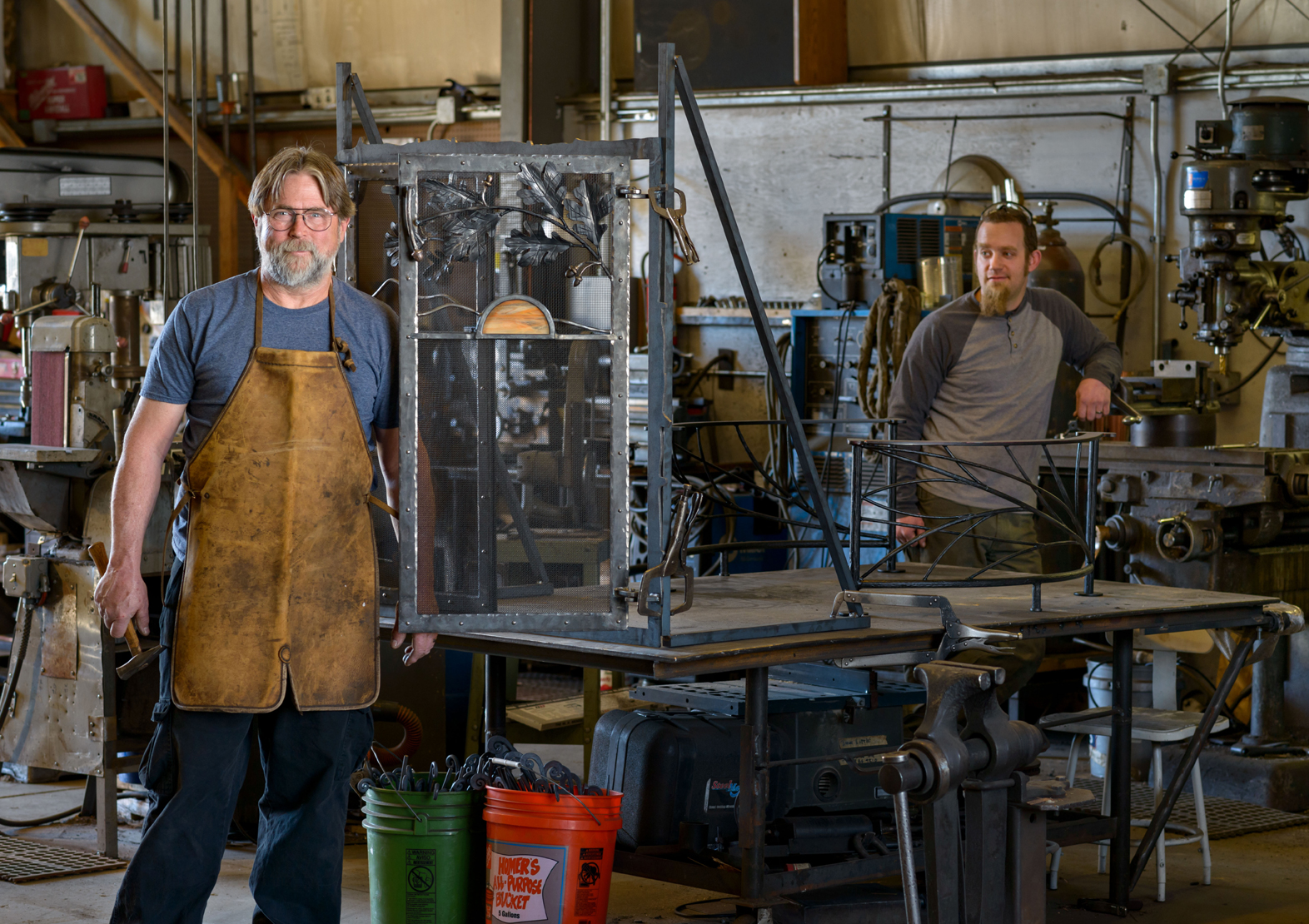 In the studio, blacksmith David H. Little (left) and his assistant Brian Custance put finishing touches on the fireplace screen seen below.

NHH: What inspires your work?

DL:  I have been—and continue to be—inspired by the natural world, and I love bringing a little bit of the outdoors inside. When I make a site visit to a client’s, I draw a lot of inspiration from their landscape, from views of where they will put my work as well as from the surrounding trees. If there’s a white pine tree outside of a living room window, for example, I try to make my design harmonize with what’s there.

Last year at the League of New Hampshire Craftsmen Fair, a couple asked if I could adapt my round cocktail table design. Instead of including a pinecone or oak leaf as the design element, they wanted a table with a tulip tree leaf and dragonfly. Of course I said, “Yes!” This person brought me tulip tree leaves, which look like a cross between maple and grape leaves.
The League of New Hampshire Craftsmen Fair offers a great symbiotic relationship for artists and prospective clients. The fair has a tremendous reputation as one of the best shows in the country, and also allows me to touch base with fellow artists.

NHH: What most excites you about your work?

DL:  I love collaborating with other artists—it’s always more fun to push boundaries, and make new and different things. I always have projects going with [furniture maker] Steve Hayden, who has a studio nearby. He made the walnut bench that surrounds the fireplace doors we recently installed for a homeowner on Lake Winnipesaukee (see photo on page 80). Glass artist Derek Marshall in Sandwich [see Lighten Up!, New Hampshire Home, January/February 2017] made the stained-glass piece for these doors—this is the first time I’ve collaborated with two artists on one project.

I’ve also worked with Peter Bloch in New London, who makes turned wood lamps and custom light fixtures. Some of our pieces are contemporary in style, while others are more organic.

I really enjoyed working with builder Liam Cargill of Cargill Construction in Campton, who’s a great detail guy. I made a railing system in a rustic twig design for a home he built on Lake Winnipesaukee.

Another project that really excites me is a sideline business I began with Steve in 2000 called Donor Arts Design Group. It all started when I was doing a show in Rhinebeck, New York, and a woman asked me if I could make a big wall piece of a tree with leaves that could be engraved. I’ve since made donor recognition trees for hospitals, universities, hospices, schools and other nonprofits; and love being able to help organizations recognize the people who’ve helped them.

One of the more unusual commissions I’ve gotten is from the Ford’s Theatre in Washington, D.C. I worked with Steve to make a piece that recognizes corporate donors—it looks like a theater seating chart and the little plaques look like tickets. What fun! 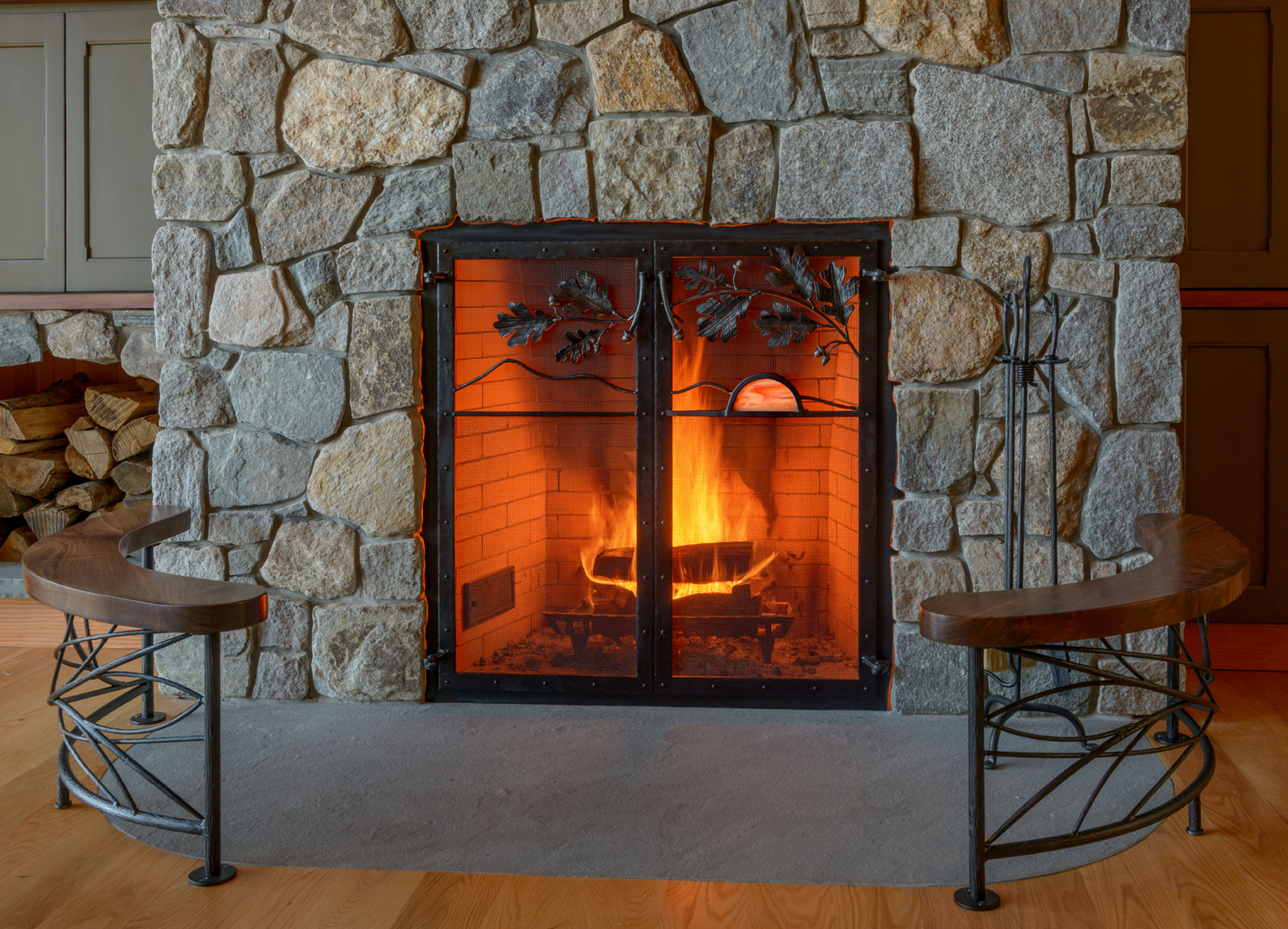 This is the finished installation for homeowners on Lake Winnipesaukee. Little made the fireplace screen and frames for the benches. Derek Marshall, of Derek Marshall Sculptural Lighting in Sandwich, made the glass sunset in the fireplace screen, and Steve Hayden, of Hayden Arts in Meredith, made the walnut seats for the benches.
Categories: Architecture and Interiors, Artwork and Design