Four Winds Farm in Peterborough is a multi-use property that pays fitting tribute to its owners’ legacy. 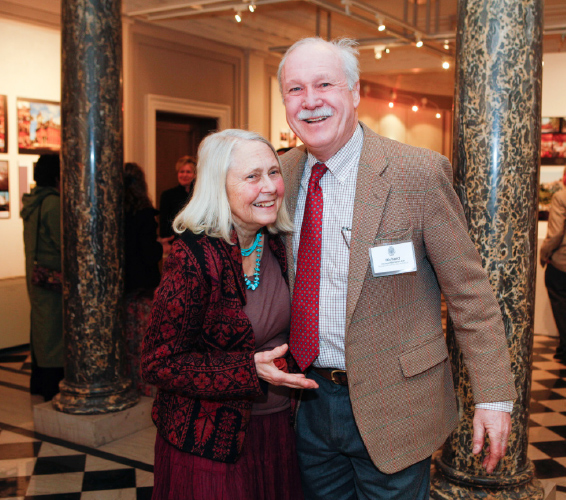 Duffy (left) and Rick Monahon were architects, preservationists and active members of the community whose efforts made a profound impact on the Monadnock Region.

Rick and Mary “Duffy” Monahon  were architects and active members of the Monadnock Region community, where their passions for architecture, historic preservation and land conservation affected the area profoundly. Together or separately, Rick and Duffy were responsible for preserving or restoring many buildings around the region, including the Dublin Lake Club, the Temple Town Hall, the Gregg Free Library in Wilton and the Peterborough Players barn. Rick, in particular, spent many years working to preserve historic Harrisville, a mill town.

In January 2013, the Monahons died in a car accident, leaving friends, family, neighbors and colleagues bereft not only of the couple’s gregarious personalities, but their efforts to shape a better place in which to live. “They were as deeply immersed in advocacy for the arts and conservation and farming and planning—and grassroots activities—as they were in preservation,” says Jennifer Goodman, executive director for the New Hampshire Preservation Alliance.

In a major way, however, the Monahons’ legacy lives on at Four Winds Farm, the Peterborough property they called home. Under the auspices of farmers Dan and Ruth Holmes as well as their daughter, Carrie Dumas, and her husband Bryn Dumas, the approximately 350-acre property is being converted to a working farm. (In fact, it had been a working farm many years earlier, but not in recent decades.) Goats now graze in reclaimed pastures, and pigs and chickens grace the grounds. Many kinds of produce are grown at Four Winds by Brittany Dooling and Michael Reardon, who live on the property and operate The Mad Radish CSA (community-supported agriculture) on the farm in the summer and fall months. Year round, local residents can visit the farm store on the property to buy local meat, eggs, dairy products and other groceries.

The buildings, many of them of local historic significance, are also being preserved. These include the 1904 dairy barn, (which the Holmeses call the Apple Barn), converted to apple processing and storage by Duffy’s uncles when the farm ran an orchard operation from the 1920s to the 1950s. This is now home to the farm store and is the site of a future milk room. The Studio—an 1840s barn where plays and other cultural events were held during the 1920s and 1930s—is now being used for functions, including weddings and dinner parties that feature food grown on the farm. There are several rental properties, one of which is occupied by Dan and Ruth. And the hilltop, Shingle-style house that Rick and Duffy built in 1998 is rented by short-term, seasonal guests.

The property’s transition to a farm began even before the Monahons passed away. Duffy kept a few sheep and was interested in restoring the apple orchard on the premises. “Duffy had always dabbled in a little farming,” says Duncan Spencer, Duffy’s son by a previous marriage. “And food started to become an issue in her mind. She was concerned about global food production.”

Rick and Duffy’s daughter Sophia Monahon recalls a trip to France when she was young, where she and her parents visited cider makers to learn about their craft because the Monahons were interested in learning to make cider. The Monahons (and also the Holmeses) were charter members of Slow Food Monadnock (an organization promoting local food) and used to host slow-food dinners in the Studio at Four Winds Farm.

Duffy’s interest in local food dovetailed with the type of farming (local, small scale) the Holmeses had been doing. Duffy was interested in returning the property to a working farm, and she had been talking to dairyman Dan Holmes about farm techniques for some time before she passed away, and the Holmeses and the Monahons had already struck up a grazing agreement. Dan and Ruth had been operating a dairy out of the Sunnyfield Farm property (owned by Crotched Mountain Rehabilitation Center) on Route 137 in Peterborough for more than ten years. But when funds for subsidizing the dairy operation for Crotched Mountain were no longer available, the Holmeses and their livestock had to look for a new farm. 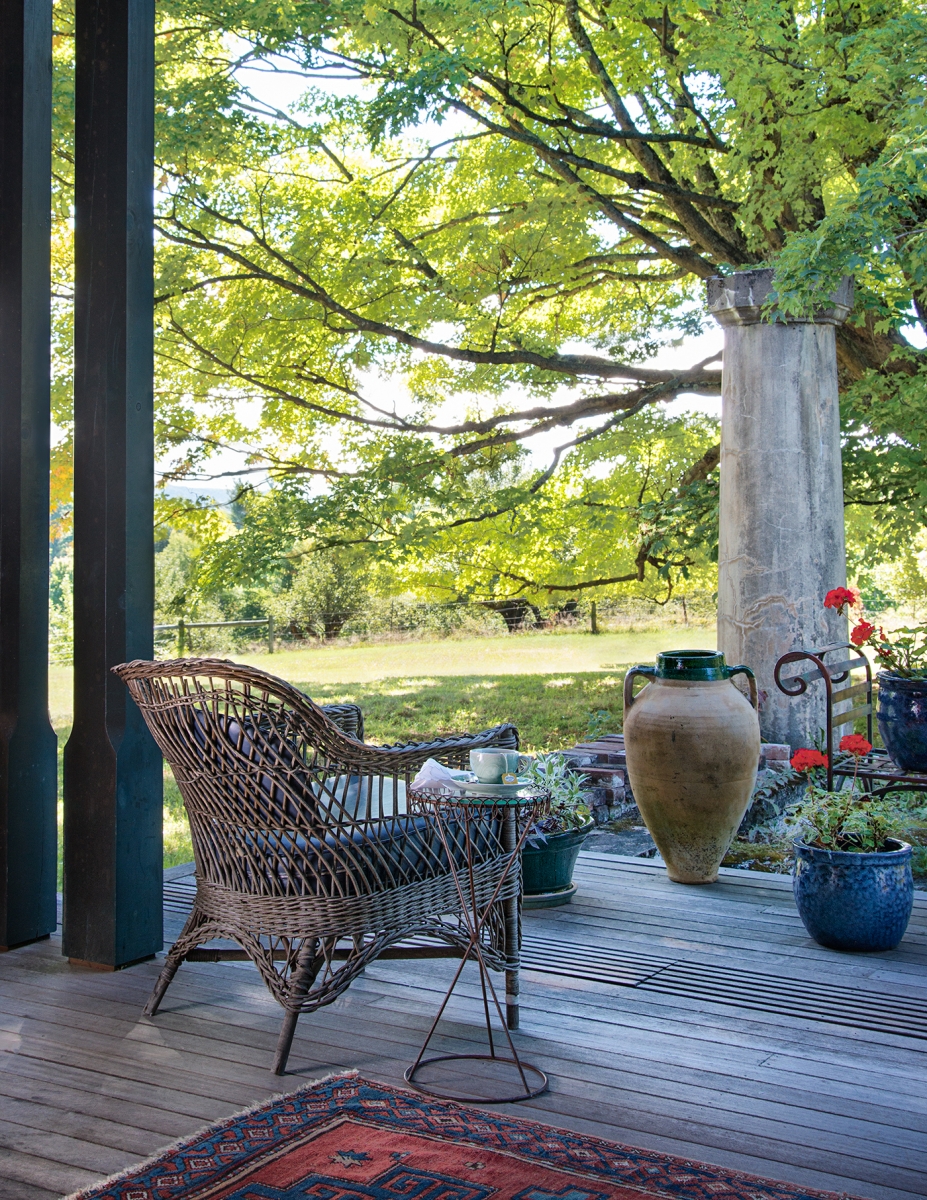 A spacious open porch offers views of the surrounding farmland.

That is how, about three years ago, the Holmes family ended up signing a forty-year lease with the Monahons’ descendants and began working the farm. According to Sophia, the agreement was made quickly. “The Holmeses felt like the right people,” she says, “and it also felt like the right thing to do because my mom was adamant about things like taking care of the apple trees and having animals on the land. We all felt like we had my parents’ blessing in working with the Holmeses’ business.”

“The family has been wonderful,” Carrie says. “They‘ve been very supportive of us wanting to turn this back into a working farm.”

The Holmes family is currently working on bringing more animals to the farm, in addition to the chickens, pigs and goats that are there now. (Their sheep, horses, and cattle spend some time at the farm in the summer, but winter elsewhere.)

Dan says he plans to move his year-round dairy operation to Four Winds in the coming months. He has already cleared fifteen acres of land for pasture. “We really needed to bring back the soil,” he says. The way that’s done is by feeding the cattle hay on the cleared land and allowing them to walk around on it. Thus they prevent the growth of saplings and other brush, and also fertilize the ground. Another aspect of clearing involves Dan picking up sticks and removing stumps—a slow and laborious process. The farm also received a Natural Resources Conservation Grant to build a bedded pack barn for the dairy cattle. The cattle include British White beef cattle and a breed the Holmeses call “Monadnocks,” which are a cross between American Milking Devons and Jerseys from New Zealand.

A forty-year lease may seem long, but Dan and Ruth have been farming in New Hampshire for twenty-five years and are in it for the long haul. He is a New Hampshire native who started farming in Canterbury, helping to restore the gardens and farm at the Shaker Village there. She is from California, but has obviously taken to New England farm life. When it comes to a love for farming, Dan says, “Either you’ve got it or you don’t.”

House amid the ruins

The history of Four Winds Farm goes back to the late 1700s, when the original settlers began farming the land. In the early 1900s, the Edward Burnett family (relatives of Duffy’s first husband, also named Duncan Spencer) bought the property, and built the stucco Manor House, a sunken garden, a tennis court and a children’s playhouse. The Burnett family also established a kind of “gentleman’s farm,” which included vegetables and a herd of Guernsey cattle, a modern milking complex and an early centrifugal creamery to complement Deerfield Farm, their much larger dairy operation in Southborough, Massachusetts. 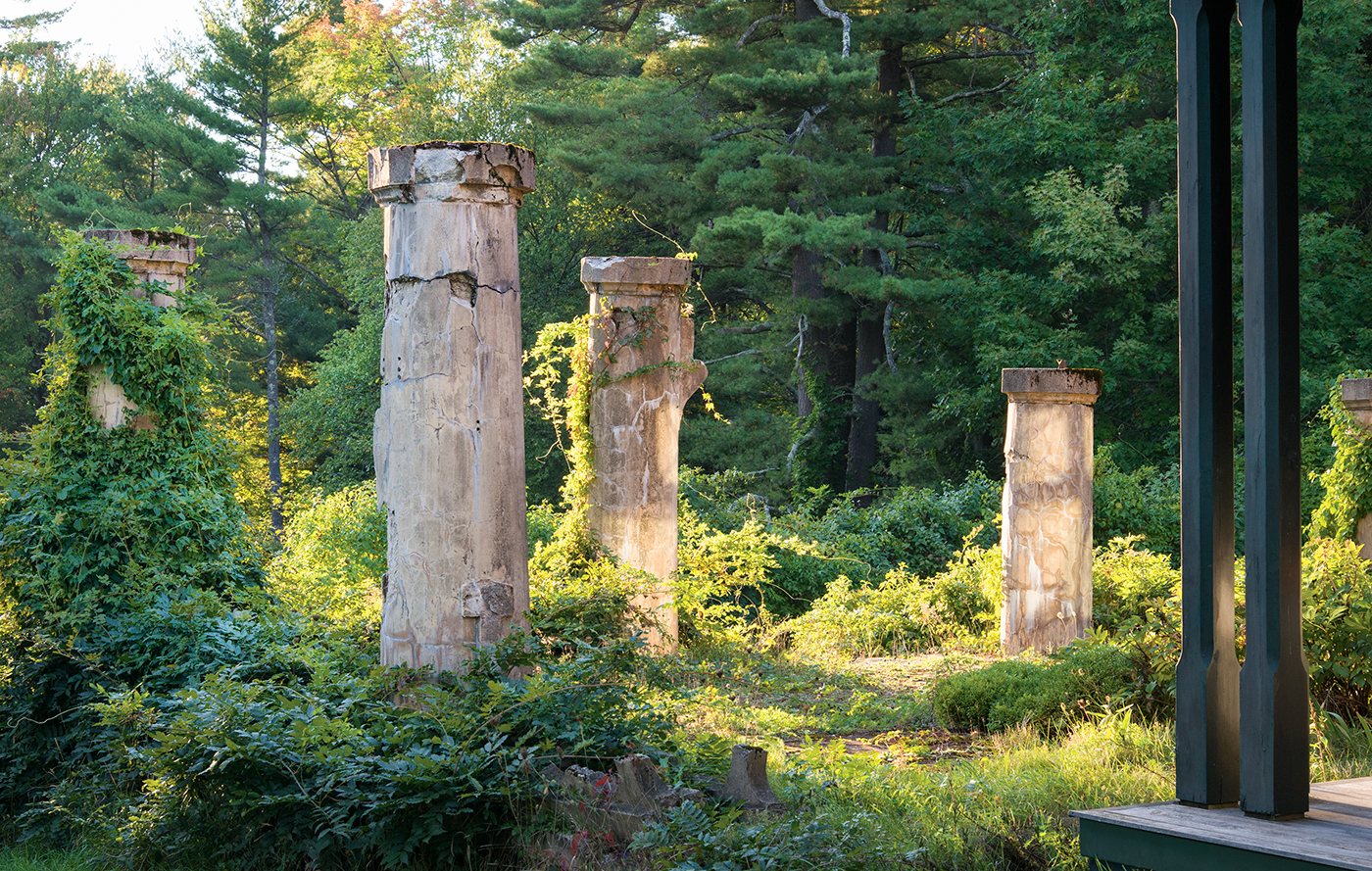 The Monahons deliberately left pillars from the former Manor House (which burned down in 1922) outside the new house, framing views from the house and porch.

Early in the 1920s, the Currier family (relatives of Duffy) bought the property and owned it briefly. Marie Currier, an actress, lived there while she was building the Mariarden studio in Peter-borough, a vehicle for Shakespeare plays and other performances. Famous artists, such as actor Paul Robeson and dancer Martha Graham, appeared and taught at Mariarden. Currier put on Shakespeare plays at Four Winds before Mariarden was finished.

In 1922, the Manor House burned. The Hoffman family bought the property and converted it from a dairy to an apple-orchard operation. Over the years, the property saw different uses, until in 1998, Rick and Duffy built a new, Shingle-Style house on the site of the old Manor House. The crumbing pillars of that old house were left in place outside the new home.

That eight-room (three-bedroom), post-and-beam house with large windows and excellent views is very similar today to how it was when the Monahons lived there. Many pieces of their furniture (a mix of antiques and new items) and artwork are still on display. Rick’s old office on the third floor looks out to a treetop and has the feel of a tree house (though the Monahons called it “the wizard’s room”). There is a lovely open porch that uses the old Manor House pillars as visual framing elements. 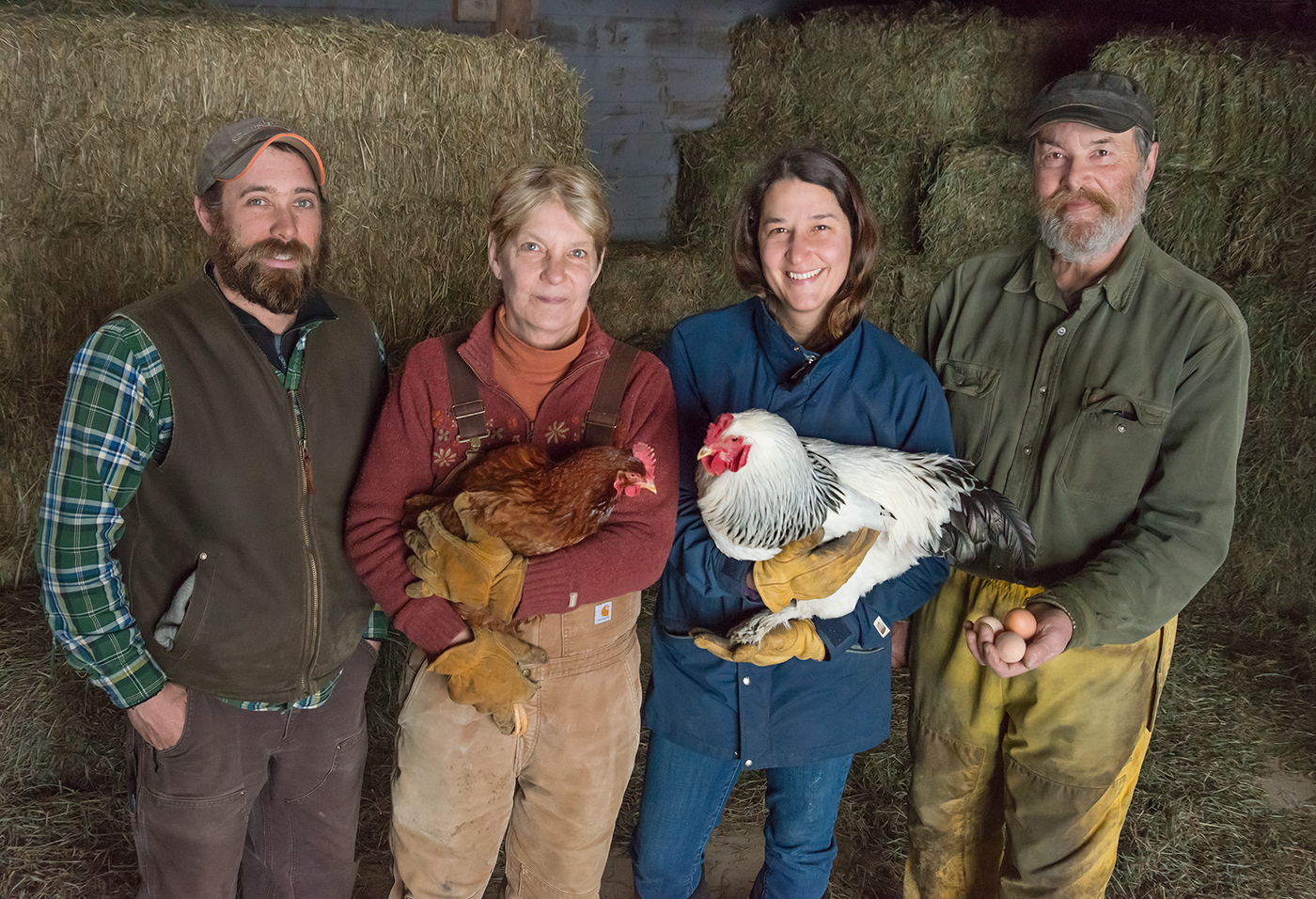 Ruth (second from the left) and Dan Holmes (right) are working the land at Four Winds Farm, with help from their daughter Carrie Dumas (second from the right) and son-in-law Bryn Dumas (left). Ruth is holding Edith, the hen, while Carrie holds Mr. Fuzzy Pants, the rooster.

In addition to plans for establishing the dairy and restoring the orchard—which probably means planting new trees—the Holmeses have plans for a maple-sugaring operation, blueberries and possibly educational programs for local children. They also hope to enhance the functions offered at the Studio with more of the food grown and raised on the farm.

“It’s an interesting point to me,” Duffy’s son Duncan says, “that the property was a dairy farm (Burnett), was converted to apples (Hoffman) and is now in the process of being converted back to dairy (Monahon and Holmes).”

“Rick and Duffy would have been totally pleased with the return of farming to the property,” says their friend and colleague Carolyn Isaak, who recently retired as executive director for American Institute of Architects (AIA) New Hampshire. “They were both really passionate about history and the environment, and about saving old buildings and re-purposing them.”

Friends of the community

The farm today is a busy place with different people growing vegetables, raising farm animals, and hosting events and guests. All this activity would have pleased the Monahons, who wanted to share Four Winds Farm rather than keep it for themselves, according to Sophia.

When her parents were alive, she says, “There was always this kind of residency quality. They had interns staying here, Democratic canvassers. My parents weren’t private by nature. They loved to see people skating on the pond or hiking on the property. They couldn’t be happier than when someone came through riding a horse.”