Garden Inspiration for Everyone

If you love flowers, you’ll love the pocket-garden tour in Portsmouth.

Now in its thirty-first year, Pocket Gardens of Portsmouth offers a peek into cherished private gardens. Many of these small back yards have survived for centuries. Today, thanks in part to the tour’s inspiration, small gardens in Portsmouth have flourished first in one neighborhood, then another and so on.

The vision for the tour began with Jackie Ellis, a member of South Church in Portsmouth. “In 1985, I went to England to study landscape design,” Ellis says. “On the weekends, people there opened up their gardens, and for a small fee, they’d have a ‘garden open.’ It was fairly random event every Saturday.”

When Ellis returned to the United States, she missed the “garden opens.” She went on garden tours in Boston and Newburyport, Massachusetts, but there wasn’t a garden tour in Portsmouth. “Then I thought the ‘garden open’ idea would be a good fund-raiser for South Church,” Ellis says.

Others did as well, and as Ellis recalls, almost immediately a dozen or so people said, “Sure we’ll be on the tour!” Because the gardens were generally small, the term “pocket gardens” fit perfectly.

Since this has always been a walking tour, the gardens are close together. Often a neighborhood has a community of dedicated gardeners who tend to sign up together. 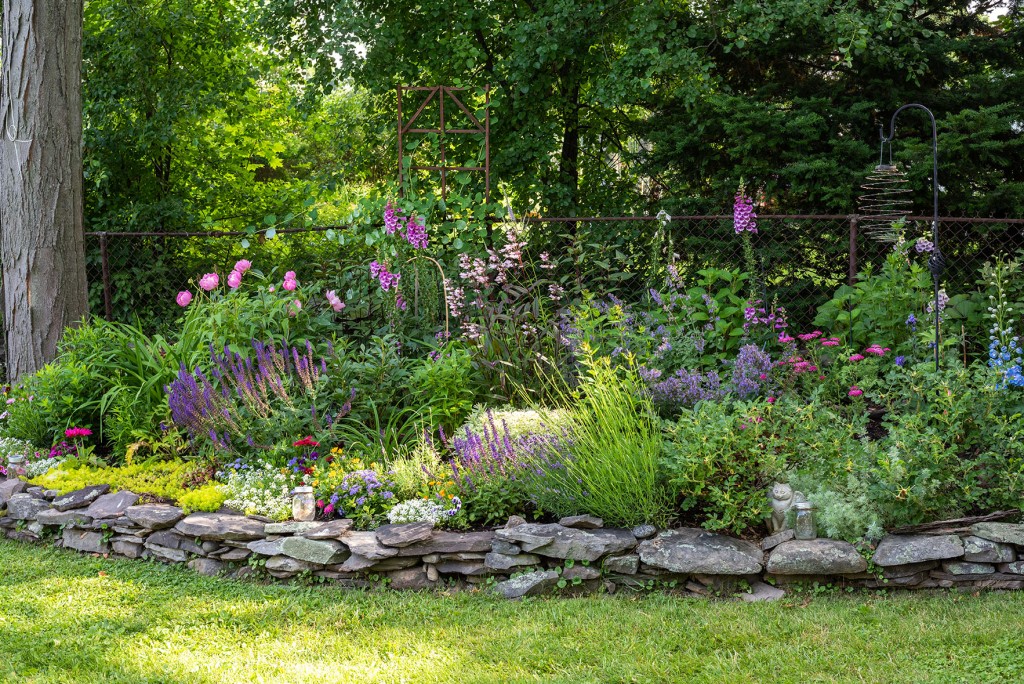 Susan and Mark Powers’s garden leans toward pinks and purples with a pop of contrast thrown in here and there. Small, solar lights along the wall provide soft light all year round, and playful garden art peeks through leaves.

Susan and Mark Powers understand completely about being adaptable when it comes to gardening. When Susan and Mark moved to this house, neither was particularly interested in gardening. They did want their entrance to be a bit more inviting, and so they had the cement walkway removed and replaced it with brick-edged with granite. Then, Susan bought a pot of Million Bells, a bright annual that looks like small petunias, and placed it on the porch. It looked wonderful. This prompted Susan and Mark to get professional advice from a garden designer, who recommended a lilac and a hydrangea for the south side of their house.

“Once we started,” Susan says, “we really loved it. We had no clue…”

Initially, Susan and Mark thought they’d have a backyard vegetable garden. After all, Susan had grown up on a farm in New Hampshire, and she had fond memories of grabbing corn from the field and eating it hours later for dinner. But, their Portsmouth yard was shady and aphids munched on everything. So, after a couple disappointing seasons, they opted for flowers and bought their vegetables at the farmers’ market downtown.

This year’s Thirty-First Annual Pocket Gardens of Portsmouth Tour is scheduled to feature gardens in the Victorian neighborhood, bordered by Miller Avenue, South Street and Middle Street. The ticket brochure contains all the information tour-goers need: a list of the garden addresses, a detailed tour map and suggested places to park. The event is held rain or shine. Tickets are available at the South Church office (73 Court Street in Portsmouth) through 2 p.m. Friday, September 11, or online at southchurch-uu-org. Tickets can also be purchased at Wentworth Greenhouses in Rollinsford and Rolling Green Nursery in Greenland. Please verify online. The tour is presented by South Church, a Unitarian Universalist congregation. Proceeds from ticket sales benefit the church and are $20 in advance; $25 day-of.

“We wanted an old-fashioned cottage garden. I like to have a lot of textures and colors,” Susan says. “There’s always something in bloom throughout the summer. And daylilies will carry us through that tough, end-of-July time when not as much is in bloom. My goal has been to plant tough, resilient perennials. For example, I planted Therese Bugnet, an old-fashioned hardy, fragrant rose with large red to pale pink flowers.”

Each year, Susan and Mark add a bit more or improve something. They’ve created a raised garden bed with a stone wall that undulates along their backyard border. There are tall plants such as delphinium and a rose trellis. The list of plants is long and wonderful, like an old poem—peonies, vervain, snapdragons, foxgloves, clematis, wisteria, monkshood, asters, black-eyed Susans, bee balm and a few tomato plants, just because.

Susan’s approach is carefree. She keeps track of what she plants from year to year, keeping the plant tags in a box. “I go to the nursery and look for color combinations that I like,” Susan says. “There’s no formula. It’s all very intuitive. I look for that zing.” One rule of thumb she does endorse is the use of white alyssum to create contrast and to rest one’s eyes. And, she adds, the bees love it, as they do the two Linden trees.

“We also have a lot of clover in our lawn, and neighbors have a couple of hives and some mason bees,” she says.

As one season rolls into another, Susan’s color palette and tastes have evolved to include tropicals, such as the Mandevilla vine on their porch with its big red flowers, along with fuchsias and begonias.

“I was shy about doing the tour initially,” Susan says. “But it was fun. We went on the tour ourselves, all within walking distance. It was really inspiring.” 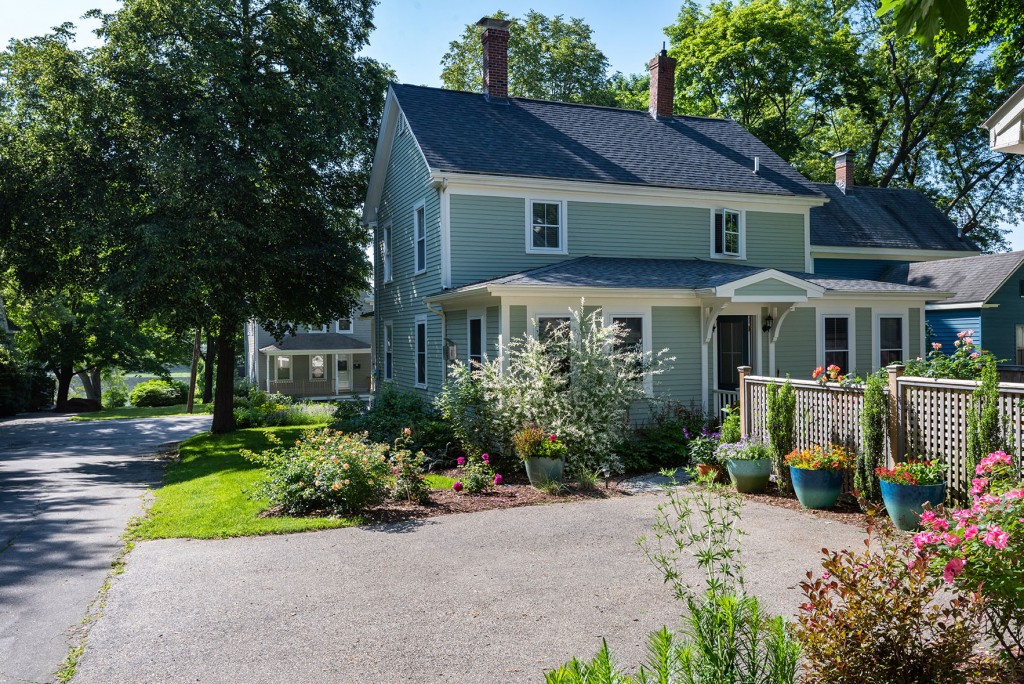 A well-proportioned hardscape complements the house and provides structure for plantings. A ‘Dapple Willow’ bush catches one’s eye at an entry point.

Down the street and around the corner is Pam Gould’s garden, which was also on last year’s tour. Gould had recently moved to Portmouth to be near her son James’s family. They live a few blocks away and were on last year’s tour as well.

“When we moved to Portsmouth from Connecticut in 2015, there was nothing here,” Gould says about her yard. “The back yard was fenced off for a dog. The house was built in the 1870s.”

However, there were two big linden trees, well worth the shade. “When I started digging, there was broken glass and pottery, rusty old nails, and construction materials,” Gould says. “So, I planted vegetables in raised beds and pots.”

“A couple years ago, I put in raspberry bushes, and they grew to be seven feet tall. They’re well-fertilized,” Gould says.

In 2018, a South Church garden scout—that’s someone affiliated with the tour—happened to catch a glimpse of Gould’s lovely garden and approached her about participating in the tour. Ellis says scouts look for a garden with good structure. Usually that means hardscaping—the addition of a patio, water feature, retaining wall or trellis that integrates the garden with the house. Flowers actually tend to be a bonus.

Gould loves roses and her back yard is an oasis for them. “Tea roses need a lot more sun than this property gets. But I’ve got a couple Grandi-floras and Florabundas. I have some white ones—a Florabunda named Bolero—that are very fra-
grant. I was walking in the nursery, and their smell was so brilliant, it stopped me in my tracks.”

In short, that’s a good tip on how to buy a fragrant rose. For Gould, visiting a nursery is a sensory and tactile experience. “It usually takes me a couple of times even to pick out annuals,” she says.

The tour is a great way to learn about gardening, say how to tell a Grandiflora (large showy roses on a long stem) from a Florabunda (stocky, hardy shrubs with roses).

Gould’s garden seems to have it all: a flagstone path, a trellised wall, a patio and lush, fragrant roses—some of which continue to bloom throughout the summer. Plus, she has two fluffy, red chickens that lay eggs.

“I started out with six chickens,” Gould says. “But two turned out to be roosters and Portsmouth is a ‘no-rooster’ town. So, I found them homes. Then, two died. So, now I have just the two.”

As someone who has gardened and kept chickens for years, Gould is philosophical about setbacks. Where there was shade, she added hostas and ferns. Then there was rock-hard soil, so she added the patio and pots. It’s all about being adaptable. Plus, she keeps track of what’s been planted, worked or didn’t work, all in a simple notebook that’s always handy.

Ellis remains involved in the tour as one of 150-plus volunteers. The crew includes the gardeners, who graciously open their gardens to visitors, as well as the dozens of church members and friends who sit in gardens, bake cookies, put up posters and do the many other tasks that bring the tour to life. This year, conveners Susan Peterson and
Lauren Katz plan to add a new educational
component.

Ellis, who sells tickets, always enjoys talking with visitors. “The garden tour in Portsmouth has become a destination,” she says. “Visitors show up from all over. They’re not critics—they’re just really enthusiastic about gardening.”