Inspired by Japanese traditions, Palmer Koelb grows specialty trees in the foothills of the White Mountains and designs gardens. 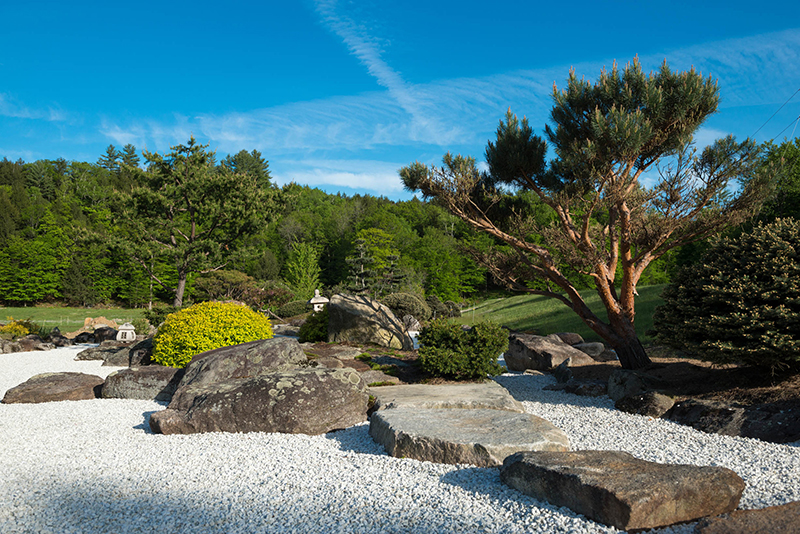 The Japanese-style Stroll Garden at Shin-boku Nursery in Wentworth projects serenity with its meticulously sculpted trees, whimsical stone lanterns and winding paths. This garden is a testament to nursery owner Palmer Koelb’s diligent work ethic and passions for Japanese gardening and trees.

In Japanese culture, garden building is honored as a high art. For Palmer Koelb, owner and founder of Shin-boku Nursery in Wentworth, the revered principles and techniques of Japanese gardening are equally respected and admired. He considers these natural-looking, asymmetrical gardens a second home, a place in nature where he finds beauty, peace and inspiration.

New Hampshire Home (NHH): Where and how did your interest in gardening, particularly Japanese gardening, begin?

Palmer Koelb (PK): I lived and grew up in eastern Massachusetts, beside the original Weston Nurseries, which in those days was the state-of-the-art nursery in New England. Both my parents were avid gardeners. My father, in particular, built stone walls and planted a couple of trees around our property; he even built a pond with my neighbor.

When I was seventeen, my father passed. It was sort of my destiny to continue the landscaping he had begun and do what my family could afford. I would go over to the Weston Nurseries’s dump and salvage plants that had been given up on. These plants were really the bones of the plant materials I put around my family’s house and pond. Those were the early gardening days.

In high school, I didn’t really know where I was headed, so I joined the military—the draft was looming. I spent three years in the army. Toward the end of my enlistment, I spent six weeks in Japan. There, I saw gardens around the Tokyo area and had a remarkable time. I knew I was home, at least a second home. I returned to Japan again—in the fall of 2008—and went on a walking tour of the gardens in the Kyoto area, which of course is the “mecca” of Japanese gardens. 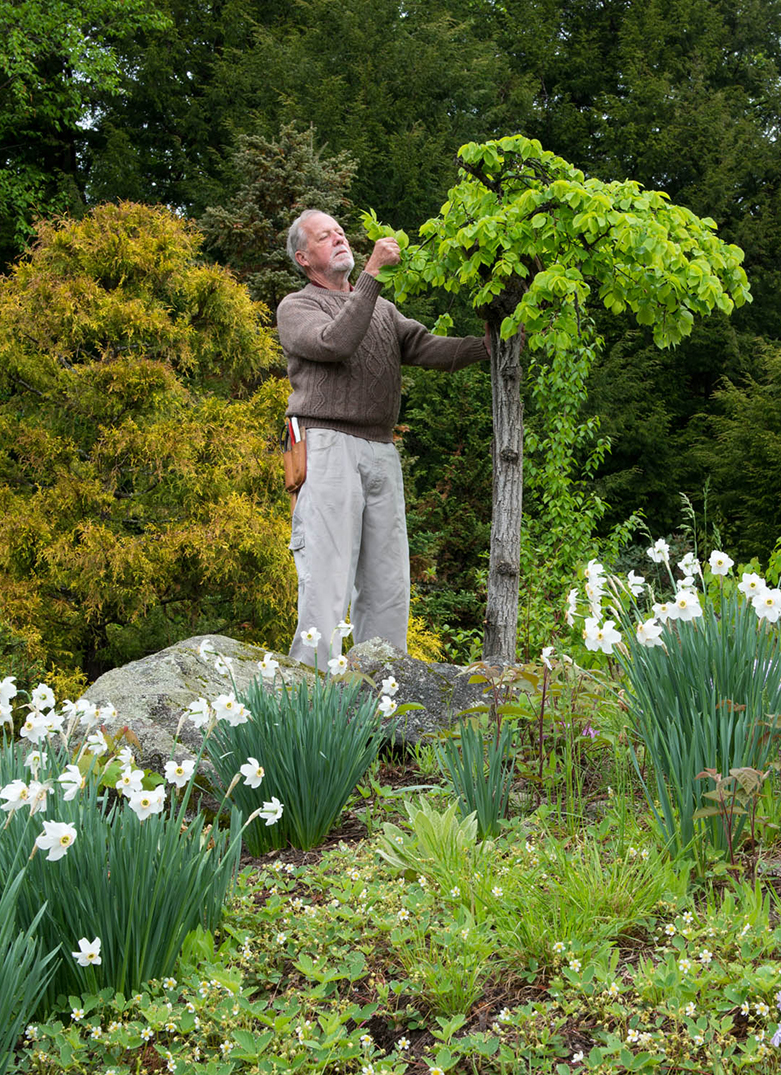 Shin-boku Nursery owner Palmer Koelb grooms a tree outside his White Mountain home, giving it a distinctive character and shape.

When I got out of the military, I spent two years at Boston University in a liberal arts program. It wasn’t for me, so I started a tree-trimming business as a summer job, and it flourished. I also took a number of classes at Harvard in the horticultural field.

Since then, I have established, moved and sold a couple of nurseries, most particularly the Salisbury Nursery. When I sold this nursery, I took some of the grafted plants that had been produced there. These plants—mostly grafted conifers that were propagated in the early 1980s—became the early plantings for my nursery in Wentworth. Here, I have eight hundred feet of frontage on the Baker River and the quality of the loam is the second best in the state.

In Wentworth, time went on, and I did a lot of landscaping and continued on with the nursery, doing both wholesale and retail. At one point, about 20 years ago, I decided to grow, prune and shape some Japanese garden trees like I had seen in Japan. I then began to bring these trees to a new location—about a mile away—and started to grow and maintain some in large pots and others in the ground.

These trees are now the hallmark of the Shin-boku Nursery, which is the largest Japanese garden-tree business in North America. We are currently cultivating more than five hundred trees.

NHH: Tell us more about your specialty trees.

PK: At Shin-boku, we follow the tradition of Japanese garden-tree trimming. Our trees are trimmed to produce a shape and personality consistent with the finest trimmed trees found in Japanese gardens.

Pruning is an integral part of my work, and it is also a very old Japanese discipline. Some of the cultivars we use are very dense if left unpruned, so trimming is done to open these trees up, which is foreign to most Western gardens. Most of the trees that I am pruning were grafted; they have distinct qualities that only a graft can truly re-create, and we prune these to be kind of like giant bonsai. Actually, they tend to be a whole lot bigger than bonsai—they can be between six-feet and twenty-feet tall.

We grow most of our trees in large containers—some up to five-feet in diameter. Our trees are groomed to have a distinctive character; we want them to be informal and have different shapes. The trunk is often S-shaped, curved or crooked; this detail makes the tree look as if it had experienced some trunk trauma in its early years. 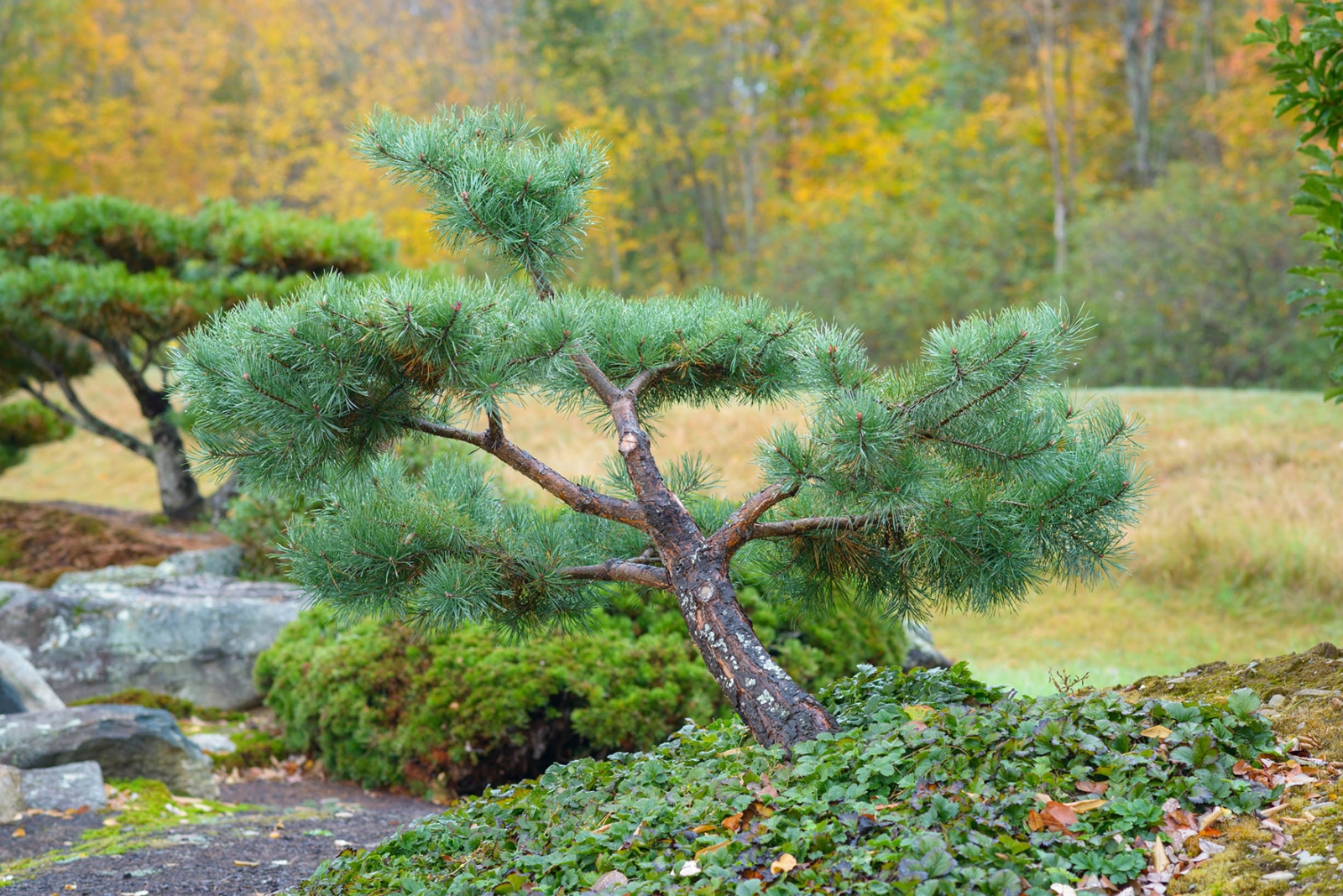 A pruned, S-curved pine borders the walkway of the Shin-boku Nursery Stroll Garden. The trees at the nursery are like no others, and pruned to produce shapes and characteristics consistent with those found in Japanese gardens.

NHH: The climate of Wentworth differs from that of Japan. How have you adapted your Japanese garden trees to the terrain and weather conditions of New Hampshire?

PK: Our trees are carefully selected to be hardy: we use two-needle and five-needle pines. I am also exploring the hardiness of some of the Japanese maples. It is my experience that if the ground is heavily mulched, even the more tender trees will get through the colder months without completely dying. 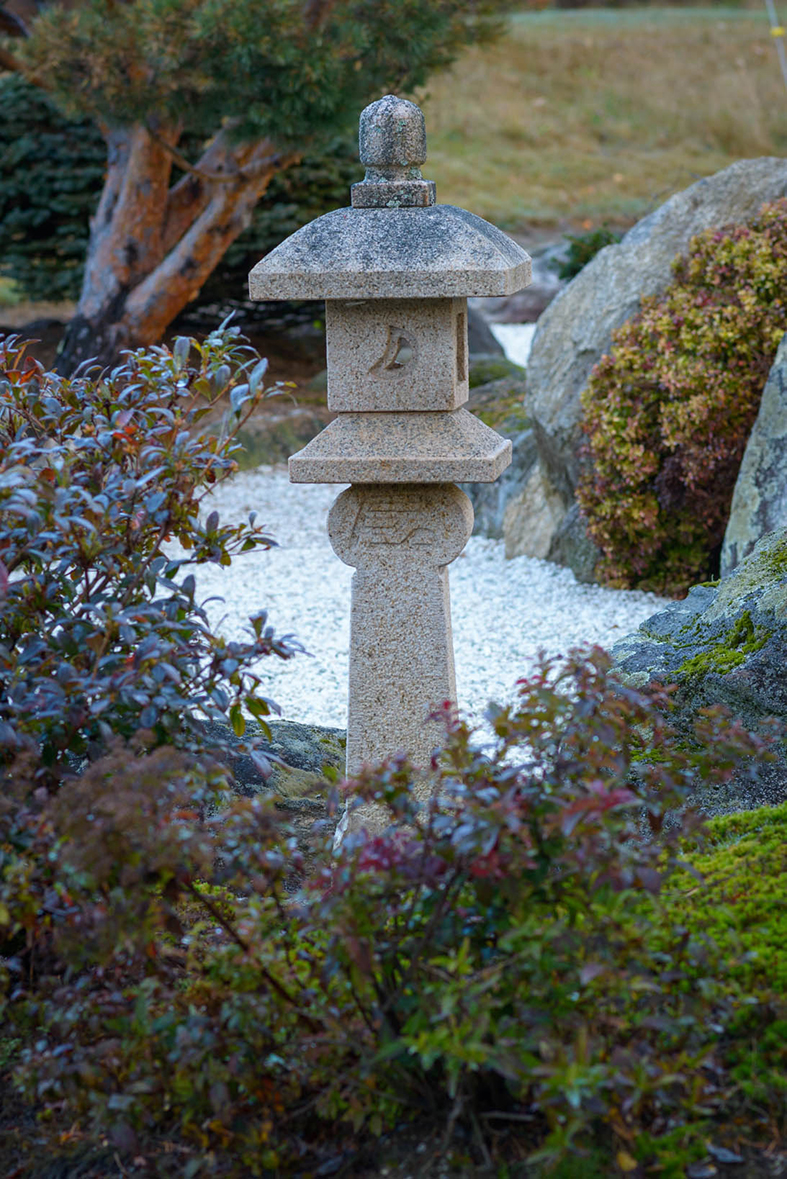 A stone lantern adds a touch of beauty and scale to the Shin-boku Nursery Stroll Garden.

NHH: What are some of the unusual projects you have provided trees for?

PK: Once, we delivered and planted a dwarf white pine tree, trimmed into a typical Japanese garden tree, at the balcony of a nineteenth-story condo building in New York City overlooking Central Park. It was quite an adventure and a fascinating project that took a little more than two years to complete. The homeowners’ landscape designers put this project together: they came to the nursery, tagged a number of trees and took several pictures to show their client for approval. When the decision was made, we delivered the tree.

NHH: How do you help either a homeowner or a landscape designer select a tree or design a garden?

PK: We work closely with clients, helping them select trees to create a Japanese-style garden that suits their desires, budget and site.

I always like to visit the physical site, so I have a feeling of what is involved in terms of the home, its grounds and so forth. Seeing the location is important, because I can tell what trees will be most suitable for that landscape. For example, some trees will not withstand constantly moist soil, so this changes the selection choices. I show the clients the most appropriate trees and then they make the final decision.

Also, one of the important things in Japanese-style gardening is the view from the house. We’ve done projects where we have suggested to the homeowners that they install a big picture window, so they can see the garden from their house. And if the physical property allows, I suggest that homeowners build a patio that comes right off that big picture window or insert a sliding glass door, so that they can be drawn out into the garden—almost immersed into it—while still inside. 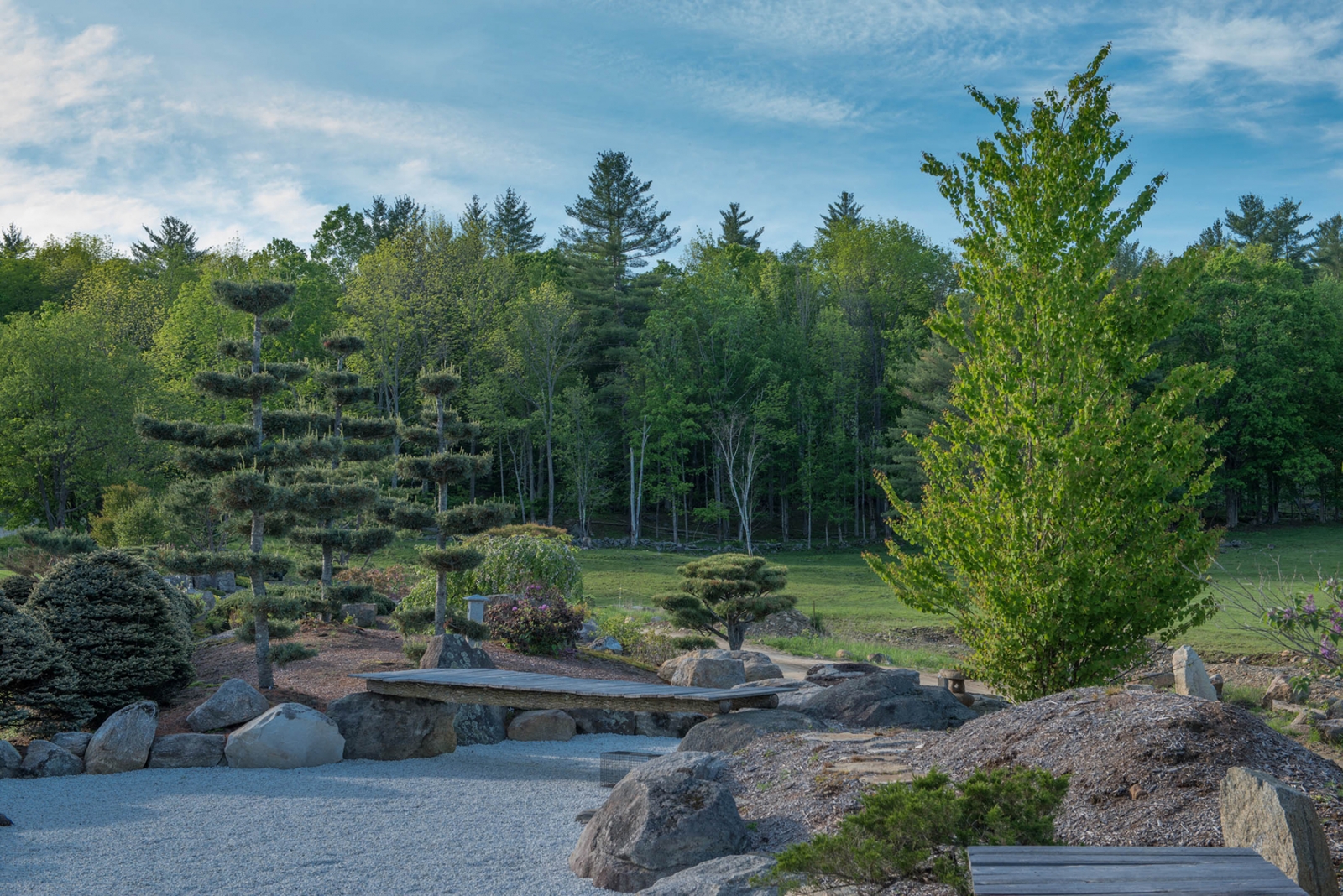 The Shin-boku Nursery Stroll Garden is a work of art as well as an ongoing project and growing passion for Palmer Koelb. It is open year-round.

PK: Japanese gardens have a different flavor than most Western landscapes. This style in Japan is called “sukiya living,” which describes bringing the outside in and the indoor living area out. This is typically accomplished with sliding doors or moving panels that allow people to move easily from one area to another.

Also, the scale is different. In most Japanese gardens, there are not many large trees; the trees are closer to a human’s size. Some Japanese gardens, however, do have big trees, which are typically set in the background and used to frame a picturesque or a distant view—this is called “borrowed scenery.”

Overall, there is a sense of serenity and tranquility in a Japanese garden. When I visited the gardens in Japan, I remember feeling this sense of comfort, which I loved. In these gardens, there are paths and benches, places to rest and reflect. It is a much different experience.

NHH:  At Shin-boku, you have a unique Japanese-style garden of your own, called the Stroll Garden. What is a stroll garden and what is yours like?

PK: A stroll garden is a garden that you participate in by walking through or around. The Stroll Garden at Shin-boku has a very informal feel and is set at the nursery’s entrance. It showcases some of the best techniques and features of a Japanese-style garden. It is also different from most Western gardens, which are done with more cookie-cutter trees and plants, which I find terribly boring. We have put in large trees and have placed big Japanese lanterns along its paths.

I’ve been working on the Stroll Garden for about nine years, and I continue to expand on it. The trees that are planted there are ones I have been working on for the past twenty years. In time, the garden will include an acre-and-a-half pond, lots of stones, an azumaya (a teahouse-like structure), a machi-ai (a covered waiting bench for reflection and garden viewing) and an “earthen” bridge (a wooden arched bridge), similar to the beautiful ones I saw in Kyoto.

NHH:  It sounds like a labor of love: an impressive, beautiful and passionate project.

PK: I invite visitors to the Stroll Garden and the nursery any time. Some visit in the coldest of temperatures—they want to walk around the nursery, ask questions and explore, and I am delighted to have them! I love what I do, and I am happy to share this passion.