Get into the holiday spirit with New Hampshire's holiday house tours

Holiday house tours offer an up-close and personal look at the many ways homeowners decorate for the season. 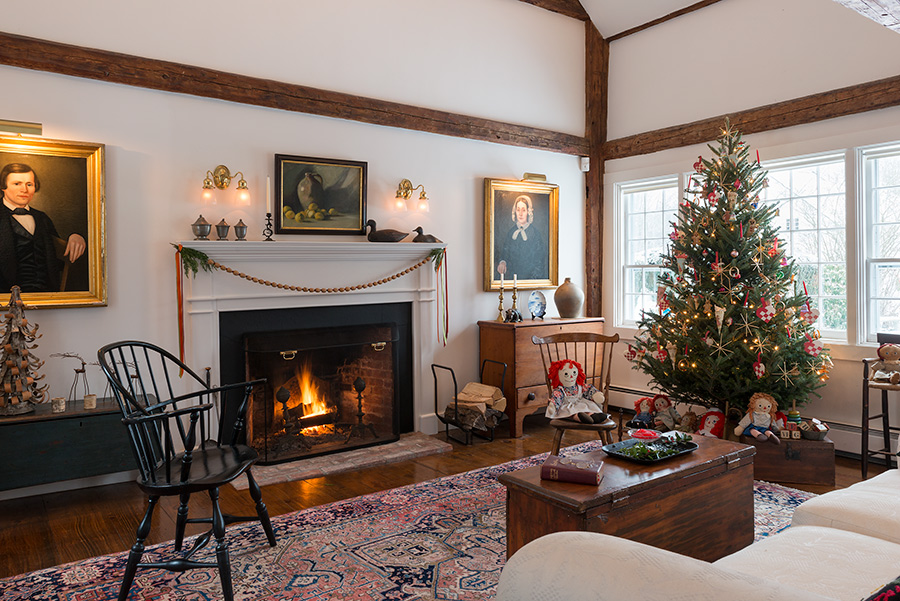 Homespun touches in the family room of Susan and Don Elliott’s New London home include a walnut garland over the fireplace and tree ornaments that Susan made herself.  Her vintage Raggedy Ann and Andy dolls rest at the base of the tree.

Just seeing Christmas decorations (as long as it’s after Halloween!) can put a person in the holiday spirit. Going on a holiday house tour to see how people decorate their homes with flair can be festive and inspiring. Maybe their work gives you a vision of how great your house could look if you put a new spin on your seasonal decorating. And it’s always amazing to see the many different directions that holiday décor can take—from coolly elegant to comfortingly homey.

Holiday house tours are generally held during the first week of December, providing a great entrée to the holiday season. Entrance fees tend to benefit a worthy cause. Last year, New Hampshire Home visited houses on both the Palace Theatre Holiday Home Tour in Bedford and The Fells Holiday House Tour in New London. The Palace Theatre tour benefits its one-hundred-year-old namesake in Manchester; The Fells tour benefits the nonprofit Fells Historic Estate and Gardens on the shore of Lake Sunapee. Both tours are scheduled to be held again in 2015 (but not in 2014).

Among the six New London homes that were part of the 2013 Fells Holiday House Tour were those belonging to Susan and Tom Galligan, Susan and Don Elliott, and Kathy and Allan Munro. The Galligans’ house is Colby-Sawyer College’s official President’s House. Since it was built in 1937, it has been occupied by seven succeeding presidents, including Tom Galligan, the college’s current president.

Decorating the Galligans’ Dutch Colonial home was a group effort, according to Susan Galligan, who describes herself as having less of a knack for decorating than the team of friends who helped her: Nell Leach, Lela Moses, Barbara Hunting and Sandy Stark (all members, officers, former members or married to members of The Fells board). Although the decorating team used some of the Christmas items the Galligans had on hand, the women all headed to Grenon Trading Company in Bedford for a big shopping trip to collect additional materials.

Among the decorating team’s standout efforts was the silver and white dining room table setting, with a long, white, lace tablecloth under holiday-patterned china, silver and crystal. Silver birds stood near the place settings, and red ornamental apples under glass provided a touch of contrast that was picked up by red ornaments in the greenery draped over a china cabinet.

The Galligans’ front entrance offered a grand holiday welcome, with a wreath (unadorned save for a large red bow) on the door, a small tree on the balcony overhead and garlands wrapped around the columns at either side of the door.

Nearby in New London, Susan and Don Elliott’s 1790 farmhouse was decorated for the tour by Susan Elliott, with a bit of help from Mauli McDonald of Art of Nature in Sunapee, who contributed fruits and fresh flowers. In the dining room, which is part of the original 1700s structure, the table was decorated using a motif of birds and fruits. Three fresh pineapples surrounded by greenery and pears formed the centerpiece. The table was set with Waterford crystal and Spode china in the “Queen’s Bird” pattern. Atop the back of each chair was a small swag of evergreen and ribbon, on which perched an ornamental bird that mirrored the china pattern.

For the family room (see photo on facing page), originally the 1790 barn on the property, Susan Elliott strung walnuts to make a simple but striking garland over the fireplace. Making the garland wasn’t too difficult, she says, especially after Don drilled the holes in the walnuts. Also in the family room was a tree decorated with woven Swedish heart baskets and straw stars that Susan made herself. At the base of the tree nestled some members of Susan Elliott’s vintage Raggedy Ann and Andy collection. 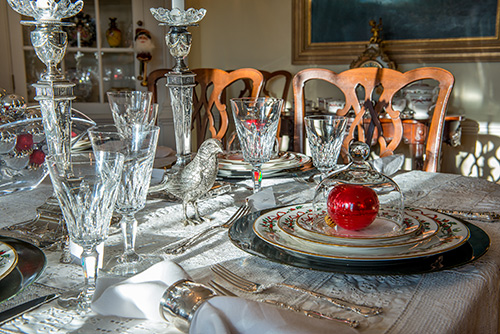 In the kitchen, a small, edibles-themed tree sat on the countertop. The tree was hung with vintage glass-fruit ornaments and gingerbread men that Susan Elliott baked and decorated.

Elsewhere in New London, Kathy Munro decorated the house she shares with husband Allan for the house tour. It was a pleasure to do so, she says: “We love Christmas a lot. It’s our favorite holiday.” As a general theme, she aimed for bright and festive. She already owned most of the decorations and only needed some extra lights to make their home really sparkle for the holiday tour.

In the living room, the tree was decorated with white lights and gold beads, including a few garlands of stars and trains for variety. Kathy’s tradition is to drape the tree with the lights and beads a few weeks before Christmas. When the kids arrive home from college, the whole family “finishes” the tree by adding ornaments.

Kathy’s holiday aesthetic also appears in the hallway, where murals with scenes of earlier life in New London line the walls. Opposite the staircase are two small trees decorated with pears—and a partridge apiece. An evergreen garland winding up the stairway railing includes ornaments in a shade of green that matches the pears. The inside front door is bedecked with berry wreathes and garlands, and flanked by two small trees decorated with berries and lights. A cluster of nutcracker figures guards the door.

Elegance on the Palace Tour 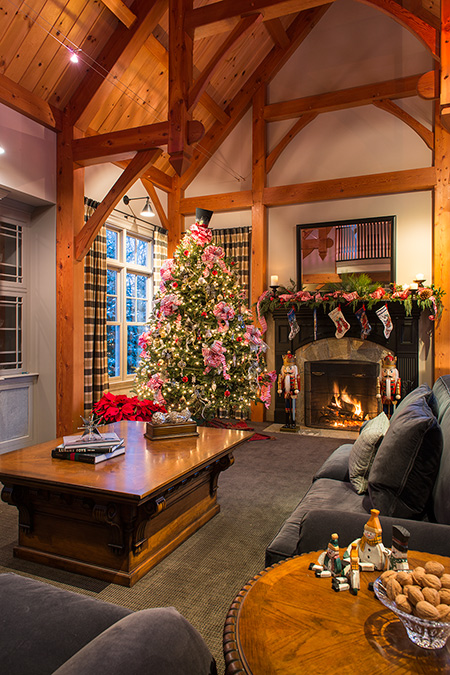 One of the featured houses on the Palace Theatre Holiday Home Tour last year belonged to Bob and Kathy Brown of Bedford. Designer Leslie Rifkin, of  L. Newman Associates / Paul Mansback, Inc. in Manchester, created elegant holiday décor for the Browns, taking her cues from the homeowners’ wishes and the house itself, which she describes as
“traditional on all levels with a current interpretation.”

Rifkin’s holiday table setting featured two large glass vases that she and co-designer Emily Shakra, of Emily Shakra Staging & Design of Manchester, discovered in South Boston. Working under Rifkin and Shakra’s direction, Richard Mein, from Royal Bouquet in Bedford, placed a layer of gold ornaments in the vases and added red amaryllis. “The amaryllis has the tall stem that we needed for the large vase,” Rifkin says. “We see a lot of unpredictable flowers used today for every occasion.”

Elsewhere in the house, Rifkin used traditional poinsettia plants, as these are an annual tradition with the homeowners and one of their favorite Christmas decorations. Poinsettias popped up in the living room, where red-and-white- striped ribbon—reminiscent of peppermint candy—adorned the tree in big bows. The same ribbon entwined with greenery was placed on the mantel, from which stockings were hung. Two large nutcrackers stood guard at the fireplace.

As different as the above four houses are, they are similar in that each conveys plenty of seasonal cheer. Happy holidays!

Invitation to drape, festoon and decorate

If you love the holiday décor ideas from these Holiday House Tours but don’t know where to begin for your own home, take heart. As a professional designer, Leslie Rifkin, of L. Newman Associates / Paul Mansback, Inc. in Manchester, says she is constantly searching for inspiration, and it can be found many places. A few of her favorite sources are settings from homes or offices in movies; cultural themes from trips she has taken; childhood memories; home stores; this magazine; and especially her clients. It is completely acceptable for a homeowner to “borrow” or build off an idea seen somewhere else, although Rifkin adds that, as a designer, one of her greatest challenges is to be original. “The way I solve this dilemma is to remember personal lifestyles. With those as your guide, decorating becomes easy,” she says.

Even if you already have a knack for decorating, be open to ideas from all corners. New London homeowner Susan Elliott, who loves to entertain and has always enjoyed decorating for the holidays, draws inspiration from her immediate surroundings: “Our house just lends itself to this,” she says.

Last but not least: It’s hard to go wrong with holiday decorating. As Bedford homeowner Bob Brown says: “We like the combination of Christmas colors with the scent of the evergreens. It mixes together to create a holiday atmosphere.”