The historic Abbott House in Bethlehem stands alone in its mix of Arts and Crafts, Prairie, and Mission styles.

The main street through Bethlehem, a North Country town of about 2,500 people, is handsome and somewhat remarkable for this part of the world due to its eclectic mix of architectural styles. Standing side by side are guest cottages (modest to grand), motels, shops, restaurants, churches, an Egyptian Revival theater and homes, many of which date back to the Victorian era, when the town was a popular destination for upper-class vacationers. Among the gingerbread and the New England vernacular is a standout structure—a sand-colored Arts and Crafts-style home that sits back from the street, but is still visible from the road. The house isn’t ostentatious by any means, but it’s very different from its neighbors and the only one of its kind in the town.

This difference caught the eye of Pamela S. Manix some years ago. Driving through town, she noticed a house “jarringly out of step with its surrounding built vocabulary.” In an undated document titled “Abbott House, Bethlehem, NH: A very informal investigation of a very undocumented house: observations and speculations,” Manix wrote: “In passing, it was a uniquely foreign animal amid the Northeastern Victoriana. … [C]ursory glances left Prairie School images of horizontal window banding … an articulated earth-hugging pedestal, hovering gables and roofs.”

Manix—presumably an architect or architectural enthusiast (New Hampshire Home did not find further information on her)—returned to visit the house and conduct local historical inquiries. Her work, which current Abbott House owners Alice and Leslie Dreier are fortunate enough to possess, is practically all that exists of the history of this elegant, enigmatic house in a town on the edge of the White Mountain National Forest.

The house shows its history

Abbott House itself, largely unchanged inside and out since it was built in 1918, offers its own best record. The style is part Prairie, part Arts and Crafts, and part Mission, with a hint of Japanese aesthetic. The wooden exterior is painted in a shade of sandy taupe, with brown and rose trim. The clapboards on the upper half of the house are finished in a geometric scallop design. There are rectangular cutouts under each eave and geometric cutouts in the porch railings. The variety of window sizes and shapes, and the gables and exposed rafters, could easily make the house look busy, but instead convey coziness and attention to detail. A front porch supported by sturdy brick columns and covered by a low, peaked overhang is a hallmark of the Arts and Crafts bungalow style. Inside, the house has nearly all of its original appointments, including flooring and wainscoting as well as light fixtures, windows, decorative glass, and crystal knobs and pulls.

“It’s a very important Craftsman-style home, one of the best examples in the state,” says John Merkle of TMS Architects in Portsmouth. Merkle, who has toured the house with the New Hampshire Preservation Alliance, points out that Bethlehem itself is significant as a once-thriving resort town. In the early twentieth century, several U.S. presidents, including William Taft and Warren Harding, visited Bethlehem as well as numerous artists and people of wealth. “It was a very vibrant, distinctive community,” Merkle says. The Abbott House stands out in this town because of its beauty, style and state of preservation. “It is intact and so complete,” Merkle says.

Stephen Dignazio, executive director of the Egyptian Revival Colonial Theatre in Bethlehem, expresses a similar opinion: “It’s a beautiful house, inside and out,” he says. Even in a town with a lot of architectural variety, the Abbott House is one of a kind, he notes; “It has a low-slung look that is almost Asian.”

When the Dreiers bought the house about four years ago, the couple liked how it looked but were also attracted to its in-town location. At the time, they lived about a mile away and knew the area well. Leslie has long-standing ties to the area—as a child, he spent his summers in Bethlehem, where his grandfather owned a hotel. Leslie and Alice vacationed in Bethlehem when they lived in Florida (they now divide their time between Florida and New Hampshire). Alice, who wrote for Antiques Monthly, also owned an antiques store on Route 302 in Bethlehem in the mid- to late 1980s. Her knowledge of antiques is evident in the graceful furnishings throughout the house.

The Dreiers bought the Abbott House from friends who had lived there for thirty years and inherited Manix’s record, which provides a few tantalizing details of the house’s history. It was built in 1918 by Alvin E. Ivie, the “silent” partner of discount-store pioneer F. W. Woolworth, as a wedding gift for Ivie’s daughter and her husband, Karl Abbott. The architect of what came to be called the Abbott House was Sylvanus D. Morgan, who designed many buildings in Bethlehem and the surrounding area. The building clearly makes thoughtful reference to the aforementioned Prairie, Mission, and Arts and Crafts styles. Also clear is the high standard of craftsmanship that went into the house, inside and out. Everything is “hand-carved, hand-made and well put-together,” Alice says. 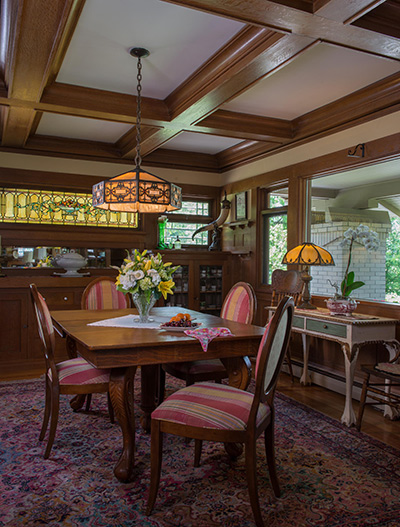 A horizontal stained-glass panel in the dining room is original to the house. The chandelier over the table is one of the few fixtures that is not original, but it harmonizes well with
its surroundings.

It’s in the details

Nowhere is that craftsmanship more evident than in the downstairs woodwork. There are five rooms downstairs: a living room, family room, study, kitchen and pantry. The dining room has a coffered ceiling as well as oak flooring, wainscoting and built-in cabinets. Some details that have amazingly remained with the house for ninety-odd years are the solid crystal knobs filled with air bubbles. Such knobs adorn doors and cabinets throughout the house.

The main dining room windows look out to the front porch and the mountain views beyond. Other windows feature artfully paned beveled glass. A horizontal, stained-glass panel, featuring a fruit bowl, is a striking detail and original to the house. The chandelier in the dining room is the only light fixture that is not original, Alice says. She bought it at an antiques store in the late 1980s and used it in her previous home. When she moved to the Abbott House, she replaced a more modern fixture in the dining room with this older one and was pleased to see that her chandelier harmonized with the rest of the decor.

The living room also has oak flooring and built-ins, a coffered ceiling, beveled-glass windows and a brick fireplace (there are two in the house). The room’s Mission-style chandelier is original to the house. A set of French doors leads from the living room to a small study, with cozy areas for reading, including a built-in, upholstered reading bench.

The kitchen is one of the few rooms that has been remodeled, but both it and the pantry have retained much of the original cabinetry.

Upstairs, there are four bedrooms, one at each corner of the house. This arrangement creates excellent cross ventilation, Alice says. There are two guest rooms, a master bedroom, and a room that serves as a study, office and personal space for Alice. The master bedroom has a fireplace as well as red and white wallpaper that is original to the house. The floral wallpaper in Alice’s study is also original. 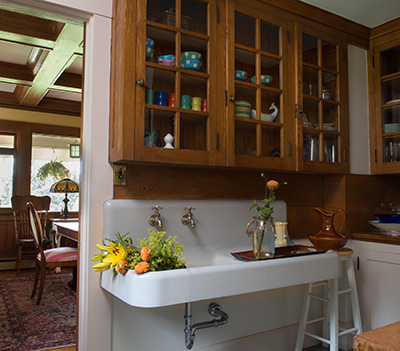 The cabinets in the pantry (foreground) are original. The pantry leads to the dining room, seen in the background, and to the kitchen (not seen, to the right).

All the furniture in the house came with the Dreiers, and Alice purchased most of it. These antiques—such as a small wooden secretary in her personal study—mesh well with the home’s style. She notes that her previous house had the same number of rooms as the Abbott House, although the rooms were smaller in the last house. When she and Leslie moved to the Abbott House, everything just fit somehow.

The sturdy front porch is one of the most striking spaces in the house. With large, earth-colored tiles, columns of artfully laid cream-colored brick and views of the nearby White Mountains, it’s a stunning room. In good weather, “When people come for dinner or a visit, we almost always end up sitting on the porch,” Alice says. White wicker furniture with floral upholstery and multicolor cushions adds color and warmth to the setting.

The landscaping includes shaped, evergreen shrubs, native trees and hardy perennials, such as daisies, hostas and lilies. An original brick sidewalk winds its way from the house. A two-car garage is a later modification, Alice says. The original garage had only one bay.

A unique piece of history

Thanks to Manix’s efforts, we know a little more about the origins of the house. She was even able to track down a couple of workmen, then in their eighties, who recalled working on the house but not much about it. We don’t know what compelled the businessman Ivie or the original owners, the Abbotts, to build a home that was so different from its surroundings and somewhat cutting-edge for the area. But thanks to luck, plus the care and attention of all the owners who have preserved so many of the original details, we can gain a sense of what it was like to live in the house nearly a century ago. And perhaps that speaks more loudly than any historical records.