Though not New Hampshire natives, these regal flowers can become the queen of our fall gardens. 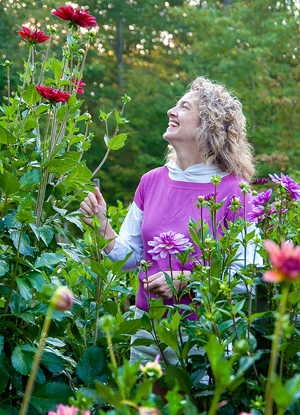 This time of year our gardens look a little sad. The annuals are tiring out, and most perennials have had their day in the sun. If there is one flower that carries the garden on its shoulders from mid-summer until frost, it is the dahlia. “Dahlias are in full bloom when the garden is kaput and nothing else is blooming,” says Emily Cleaveland— aka the Dahlia Lady.

While living in Norwich, Vermont, Cleaveland started selling mixed bouquets of flowers at the farmers’ market. “So many people just wanted to buy the dahlias out of the arrangements that I started to grow more and more of them, and to focus less on the other flowers,” she says.

Cleaveland calls her Springfield business By Design Dahlias, and this is her seventeenth year growing and selling dahlias. In those years, she has learned much about them through trial and error as well as lots of research; she has also moved to New Hampshire and had three children. “Dahlias are a delightful crop to grow at home with kids,” she says.

Each spring, Cleaveland sorts and replants tubers of the sixty-five-plus varieties of dahlias she saved through the winter. Through the summer, each plant can yield between fifteen and twenty tubers, so she ends up with about three thousand tubers to clean, separate, label and store in the fall. “It is a very laborintensive chore,” she says.

The next spring, she sorts again, tossing any tubers that don’t look likely to sprout, packaging the plump healthy ones to sell and planting about two hundred in her cutting garden. “I work like a dog to plant twenty a day,” she says.

Soil preparation is key to their success. Cleaveland has developed her own fertilizer blend—Emily’s Dahlia Gro—which is low in nitrogen and high in slowrelease phosphorus and potassium. “Feeding the plants too much nitrogen will give you a plant the size of a La-ZBoy recliner but no flowers,” she warns.

To avoid disease problems, Cleaveland gives the plants plenty of room to grow, spacing them three feet apart in rows that are four feet apart. As for pests, she says deer will eat dahlias, but they are not a favorite food. She uses Liquid-Fence deer repellant twice a year, with applications six weeks apart. Her neighbor’s cats take care of any mice or voles.

Cleaveland has a display garden near the house where she plants new varieties she is trying. “I like to add five or six new varieties a year, and drop old ones if they are too small, don’t sell well or the color isn’t up to snuff,” she says. “Everybody has a different taste in color but, for me, form is most important. I like big, full, rounded flowers with long stems for cutting.”

Some of her plants produce between eighty and one hundred blossoms each. “Some sell better than others, and every year is different,” Cleaveland says. “Brides want pink ones in August but by September, everyone wants fall colors.” 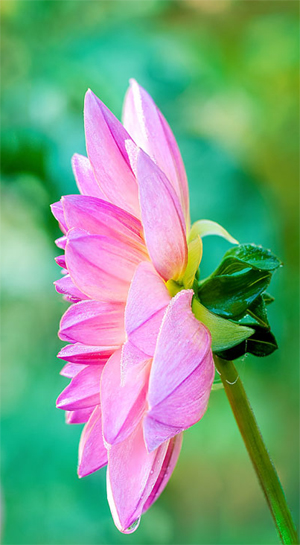 Even though Cleaveland now lives thirty miles from the Norwich, Vermont, market, she has so many faithful customers in that area that it is worth making the early morning trip. She needs to be unpacked at the market by 8 a.m. and set up before the market opens at 9 a.m. As an un-reserved vendor, she doesn’t have to do the whole season. She sells tubers for planting on two weekends at the end of May and returns to sell flowers when the plants start to produce lots of blossoms around mid-August.

Cleaveland is selling her flowers locally as well. Area florists—including Allioops! Flowers & Gifts in New London, Sorella Flower Company in Contoocook and Cobblestone Design Company in Concord—have fallen in love with her flowers and she delivers to them during the week.

“I used to do a lot of weddings, but I’m getting away from it,” she says. She also gives illustrated talks about dahlias for garden clubs and other interested groups. In the fall, Cleaveland runs a “Dig Up the Dahlias” workshop to teach people how to properly divide and store their tubers.

Flowers aren’t the only interests of this fascinating woman. She also teaches fitness classes with names like Insanity, a cardio class, and Les Mills’s Body Pump weightlifting at the River Valley Club in Lebanon. She plays hockey on a men’s team called the Neanderthals where she is “just one of the guys” and sings soprano in the Kearsarge Chorale. “I like the dichotomy!” she says.

Since dahlias are native to Mexico, they are not hardy in New Hampshire and the tubers won’t survive the winter in the ground. Cleaveland offers this advice:

• Wait until the foliage dies back after a frost or two, and cut back the stem to 2 inches.

• Carefully dig up the clumps. You will be surprised at how big they have become.

• Wash off the soil, and let the clumps dry indoors overnight.

• Now is a good time to split the tubers. Each one must have at least one “eye,” or it will not grow. The tubers are located at the base of the stem. If the stem is split so that a piece of it goes with each tuber, there shouldn’t be a problem. (Eyes are easier to see in the spring, so if you aren’t storing a lot of tubers you can wait and split them in the spring.)

• Store in slightly dampened cedar chips or peat moss in a black plastic bag with lots of holes punched in it. Dahlias should not dry out completely but will rot if kept too wet. Check a few times over the winter.

• Store in a dark, cool (about 55 degrees or lower) location. Don’t let the tubers freeze at any point or that is the end of them. 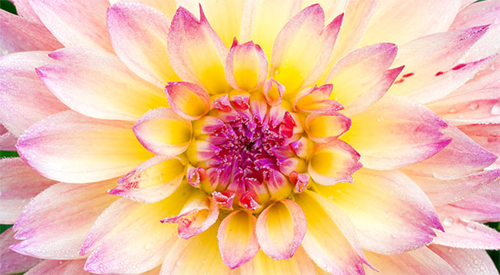 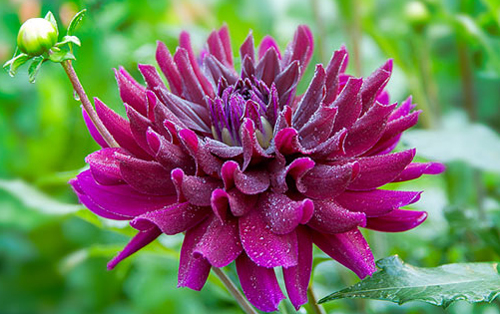 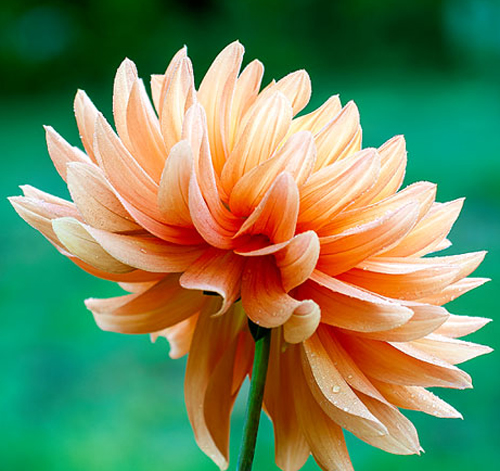 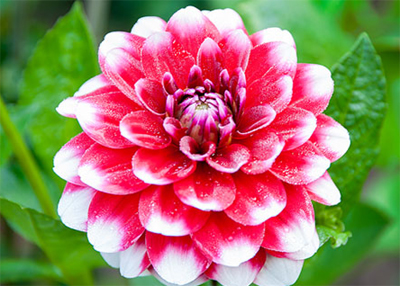 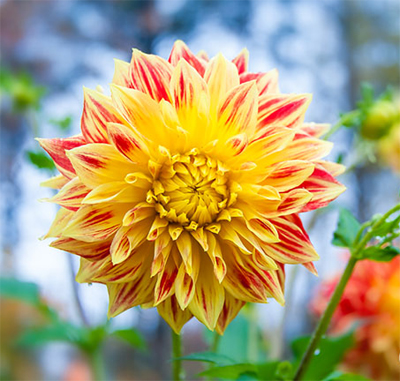 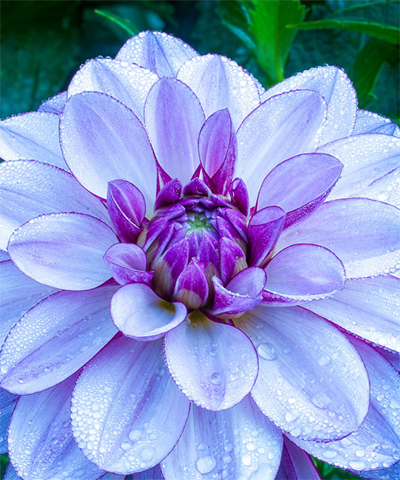 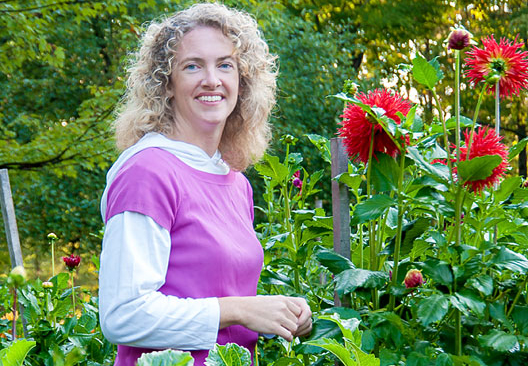 Although Emily Cleaveland says it is hard to pick just one favorite, ‘Penhill Dark Monarch’, with its bright red cactus-type flowers, is among her top choices.

Even though dahlias came from Mexico, they will feel right at home during a New Hampshire summer. If you wish to plant some next year, be sure to follow Emily Cleaveland’s advice.

• Preparing the growing bed is an important first step. Choose a bright, sunny location for the most blossoms.

• After the spring’s last frost has passed, dig a large hole—between eighteen and twenty-four inches deep and wide. Lighten hard-packed soil or clay with peat moss or potting soil. If the soil is sandy, add some topsoil. Enrich with compost, but don’t use cow manure. Backfill the hole to five inches from the top with loose, loamy soil. Work half a bag of Emily’s Dahlia Gro fertilizer (or 1 cup of low-nitrogen bulb food) into the loose soil. Add 1 inch of unfertilized soil to the top and work the remaining fertilizer in a ring around the edge of the hole.

• Place the dahlia tuber in the center of the hole at a 45-degree angle so the tip is anchored in the soil but the eye gets plenty of light. Bring the soil up to level, lightly covering any sprouts that may have emerged. The top should be between 11/2 and 2 inches deep. If the eye is too deep, it will not grow.

• Add a stake now to avoid spearing the tuber later; the plants will need support as they grow.

• Do not mulch. This harbors slugs, and dahlias like the sun on their toes.

• Do not fertilize again. If you followed the directions for preparing the bed, the tubers have everything they need. Too much fertilizer grows a leafy bush with no flowers. Planting too deeply or too late in the season has the same result

• Initially, do not water. Water only during droughts in the summer, and during those times, water deeply—not daily.

• Cut the flowers! Dahlias love to have their flowers cut; the more you cut, the more they produce.