Home–and Studio– Away from Home

A mid-nineteenth-century firehouse is converted into comfortable living and working space. 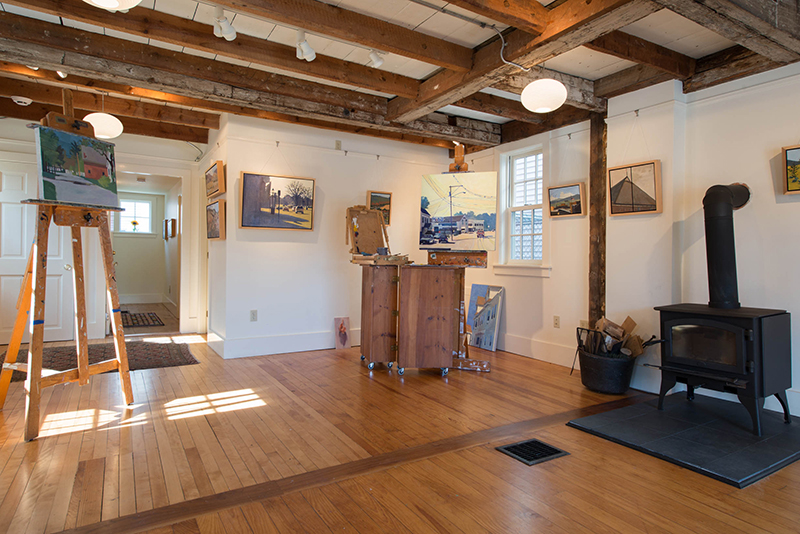 The original wooden beams lend character to this converted firehouse. Walls were taken down on the first floor to open up the space for a studio.

A renovated 1850s firehouse in the center of Contoocook has become the home away from home and studio for a Massachusetts-based artist and her husband who sought a retreat within a commutable distance to Concord.

Dora Atwater Millikin and Tripp Millikin reside primarily in Westport Point, Massachusetts, where Dora established her Wyndfield Studio and gallery. In 2009, after Tripp obtained a job in Concord (although he now works in Boston), the couple purchased the partially renovated, two-and-a-half story building that once housed the local firehouse and equipment in the mid-1800s.

The home—located on a small, low-maintenance lot—offered the character, natural light and close proximity to village life that Dora found especially refreshing.

“Tripp ended up working in Concord at the time, and we needed a place to stay for the week. We looked for a place that had character—and no land to take care of,” Dora says.

With a space located in the center of town close to The Everyday Café, Dora delights in the comings and goings of village life. “This is more of a happening place, a happy place, even in the middle of a snowstorm,” she says. “It’s been a very inspiring space—I love it.”

Dora, who paints in the contemporary American realist style, calles her Contoocook studio, Wyndfield Studio North. Back in Massachusetts, she is represented by Walker-Cunningham Fine Art in Sudbury.

A lifelong artist, Dora has earned accolades for her artwork since graduating from high school in Greenfield, Massachusetts, with the Senior Art Prize. Since then, she has earned two bachelor of fine arts degrees, one from Newcomb College in New Orleans and another, specializing in painting, from Lyme Academy College of Fine Arts in Connecticut. She has earned top honors for her paintings at juried competitions in New York City and Providence, Rhode Island. Dora’s paintings can be seen at the Newport [Rhode Island] Art Museum; the Walker-Cunningham Fine Art in Sudbury, Massachusetts; and the New Bedford [Massachusetts] Whaling Museum. Her work is also part of private and corporate collections.

Making the space their own

Crews from D.M. Carrier Construction in Concord renovated the exterior of the building by repairing and repainting the siding, and restoring the porch and deck. A new metal roof tops off the project.

When the Millikins purchased the property, the second floor and upper loft area had been partially renovated. The couple finished the first floor; installed new windows throughout; and put in a new air conditioning system and a new Rais woodstove that “heats up the whole place,” Dora says.

Dora and Tripp completed some renovations on their own but hired Concord-based builder Don Carrier, of D.M. Carrier Construction, and his team for other projects, including replacing the old windows with high efficiency windows throughout, installing a new chimney with two flues for new woodstoves on the first and second floors, renovating the front porch and installing a new gate that swings open on the front porch to keep the dogs in.

Carrier explains that one of the first tasks was to remove temporary walls the previous owners had installed on the first floor, to open up the space. The home’s granite foundation was patched up, and electrical and plumbing systems were upgraded in the kitchen, bath and new laundry area. Major tasks included installation of a new metal roof, repairing and repainting the exterior, and building a new shed that is connected to the back of the house.

Carrier notes that one challenge with the charming home was its proximity to adjacent homes. “It was a tight area with a four-foot set-back,” he says.

One pleasant surprise was finding hardwood flooring under the old carpet Carrier removed. “We took up the carpet and refinished the wood floors,” he says, adding he is pleased with how the home turned out.

“It is beautiful,” he says.

The first floor includes the studio, a bathroom and bedroom; the open-concept kitchen and dining area are on the second floor; and the master bedroom is in the third-floor loft.

No, there isn’t a fire pole to slide down in this antique home, but there is a spool in the cupola where workers would wind up and store the fire hoses.

On the walls throughout the home is Linen White Benjamin Moore paint, a color that accentuates the antique wood floors and exposed beams. Color and texture were added with Dora’s paintings and other collectibles such as a Masai wedding necklace from Africa and an Afghan prayer rug on the walls. The furnishings range from an antique English bench to the wooden dining set brought from the couple’s Westport Point home.

“We didn’t purchase anything new, really. I went shopping in our house in Westport, and I had a great time doing that,” Dora says.

“The home has a traditional base with some very eclectic features,” she says. “With my contemporary art, a mix of antiques, some modern fabrics and overall clean lines, the décor is really ‘us.’”

View more photos from this feature: