How Much Does a Remodel Cost, and How Long Does It Take?

The 2016 Houzz & Home survey asked 120,000 Houzzers about their renovation projects. Here’s what they said 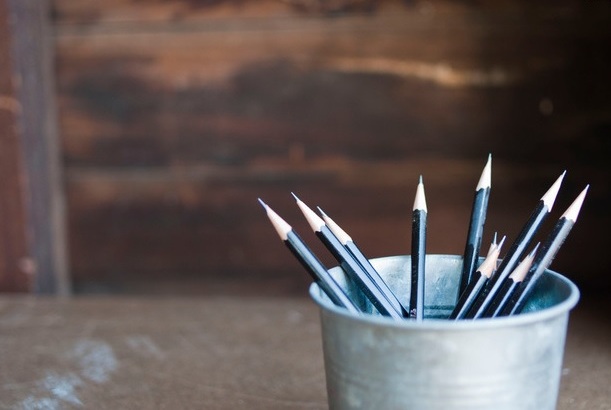 If you’re looking for a sense of how much it will cost to renovate your home, and how long it might take, Houzz has some numbers for you. The 2016 Houzz & Home annual survey gathered information from more than 120,000 registered users of Houzz, including more than 70,000 who renovated in 2015. Their responses provide insight into how your own renovation project might play out.

High renovation costs can be surprising for first-timers. After all, it’s easy to fall in love with photos of a high-end kitchen or Sub-Zero appliances when you don’t have to pay for them. “A lot of times people have grandiose ideas or pictures of things that they’ve seen — it looks great but doesn’t fit their budget,” says Brandon Quinton of Cameo Homes in Salt Lake City. “Everyone is drawn to the most expensive stuff. Everyone has got expensive taste; they just don’t know."

Your accounting professor (or a parent or grandparent) may have told you that it’s important to have, and stick to, a budget. If you find that challenging, don’t feel too bad. A whopping one-third of renovators surveyed began their projects without setting a budget at all.

Did they pay dearly for that? Surprisingly, no. Owners who started with no initial budget actually spent less, by about $8,000, than those who had a budget and stuck with it. It could be that the budget-avoiders were doing DIY projects, renovating over time or taking on lower-cost projects overall.

As for those homeowners who exceeded their budget, well, they spent twice as much as those who had no budget at all. And they probably had some gorgeous results for their big spend. Notably, only a tiny fraction of renovators came in under budget.

Why do people go over budget? Often because they have nice taste. As this chart shows, nearly half of the people who went over budget in their renovations said they decided to buy more expensive materials and products than initially planned, while about one-third decided to change the scope of their project.

How Much Will This Cost Me?

So how much does a renovation cost overall? Obviously, the total cost will depend on the project’s scope, the materials selected and the fees of the professionals hired to do the job. Owners who completed our survey spent an average of $59,800 on renovation projects. Keep in mind that this figure is an average for all types of projects, including basement remodels and full kitchen gut jobs. Each project is unique, and the average renovation spend figure is not intended to be the norm for every project.

That said, the averages do provide some interesting guideposts. Notably, recent home buyers spent twice as much as people getting ready to sell. “Recent home buyers tend to do more, spend more and are more likely to hire professionals to help with their renovation project than other homeowners,” says Nino Sitchinava, principal economist at Houzz.

Ready to Remodel? Hire a Kitchen and Bath Designer

Where Does the Money Go?

Kitchens, bathrooms and living or family rooms are more likely to be renovated than any other room, according to the survey. The kitchen gets the most attention: Nearly one-third of all renovators remodeled the heart of their home, and more than 40 percent of recent home buyers did. Bathrooms are right behind in popularity, as this chart shows. 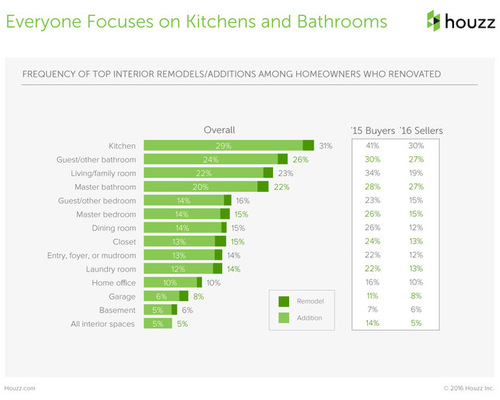 Homeowners spent an average of 12 percent more to remodel a kitchen in 2015 than they did in 2014, as more shifted to broader-scale projects. A major kitchen overhaul, which includes at least replacing all the cabinets and appliances, cost about three times as much as a minor kitchen renovation.

In addition to redoing interior spaces, many home buyers who are renovating update core functions like plumbing and electrical systems, home automation, heating and cooling, as shown here. This isn’t the glamorous stuff, but it sure makes a home run more efficiently.

The average spend on master bathrooms also grew 12 percent year over year, as more homeowners replaced at least the cabinetry or vanity, the toilet and the countertops. Getting a pro involved in a major bathroom overhaul (or a kitchen renovation, for that matter) raised the cost by about 44 percent. Nonetheless, 85 percent of renovators hired pros for help with their projects. Most of us need the help!

Another factor in renovation costs: home size. We sliced the data to assess project spend by the home’s square footage. Not surprisingly, owners of larger homes spend more.

Update Your Bathroom With a Sleek, New Shower 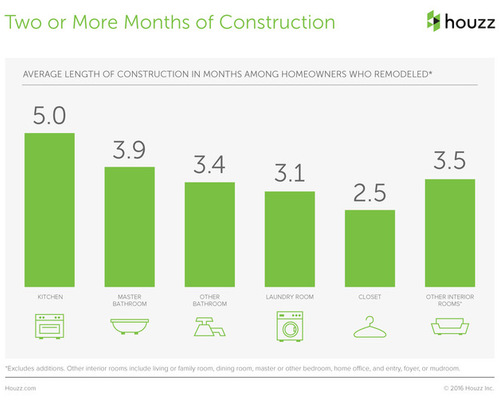 How Are Remodels Funded?

Given the costs of renovation, it may be surprising to learn that the overwhelming majority of renovators surveyed used savings or personal finances to pay for their projects. The youngest group of homeowners relied on credit cards far more than those over age 55.

How Long Will a Renovation Project Take?

When owners finally embark on a renovation, those projects do take time. And typically, the construction phase is only about one-third of the time for the total renovation process, including the planning phase.

This chart shows the average time in months it takes for popular renovation projects. Kitchens take the longest, at around five months, while closets are the shortest project, at about two and a half months.

Notably, the No. 1 reason people decided to renovate instead of buy was a desire to stay in their current home or on their current lot or land, according to the Houzz & Home survey. Forty-nine percent of survey respondents who renovated cited this as a reason. Twenty-eight percent said that renovating was more affordable than buying a different home.

Desire to stay in place increased with age: 26 percent of millennials (ages 25 to 34) wanted to stay in place, while 45 percent of Gen Xers (35 to 54) and 56 percent of baby boomers (55-plus) did. The data aligns with other noted trends: People aren’t trading up in housing, according to real estate data site Redfin. In 2001, the median amount of time a homeowner stayed in a home was four years. By last year, that had risen to a median of nine and a half years.