How to Identify Shingle Style Architecture

Intimate or rambling, in the coast or by the sea, Shingle homes are seeing a revival. Has your home joined in?

What do so many of us find so alluring about a wood shingle? It could be that it is one of the simplest finish materials possible. Wood is an accessible and renewable resource that adjusts to several climates and can be shaped and applied in numerous ways. With age it softens in color, even when painted, and crinkles, emphasizing its organic relationship with us.

In the late 19th century, architects and their clients desired a departure from existing elaborate and fanciful Victorian designs. English and American Queen Anne architecture had run a popular course. That style was initially executed with brick exteriors in England, reinterpreted by Americans in wood and later elaborated with extravagant fretwork.

Shingle style eliminated the ornament; the Queen Anne shape was overlaid and gently wrapped with the conducive and versatile material, unifying the freely formed spaces into a comprehensible whole.

Shingle style originated in New England, crossing paths with and borrowing traits from colonial revival and Romanesque architecture. Because of this, combinations on the theme are broad. Its defining characteristics are the obvious shingle-clad walls and roofs, but there are also a few other characteristic elements applied in infinite combinations. 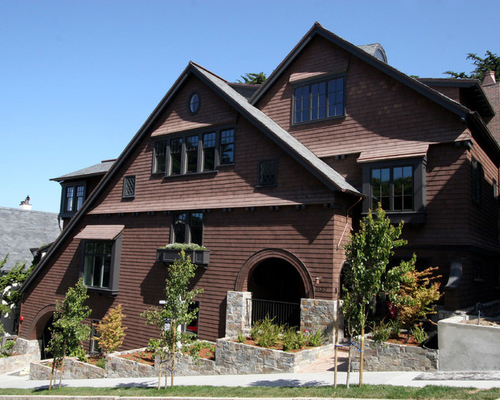 Restrained details. Compare this San Francisco example to other local Queen Anne houses, and you can see how modern this would have appeared in its time. Notice the restrained detailing and how the shingle texture unifies the house. Also noteworthy, this house has Romanesque shaped arches for its entrances.

The style faded from popularity in a rapidly changing 20th century. Plenty examples of it survived and were pampered, while a few landmark originals were lost to neglect, decay and indifference.

The 1975 documentary Grey Gardens, in which a Shingle-style mansion sets the stage for a disturbing look into the troubled lives of a pair of Jackie Onassis’ relatives, casts a somber tone over the theme.

This Shingle-Style Home in Henniker Is Collected, Cozy and Charming 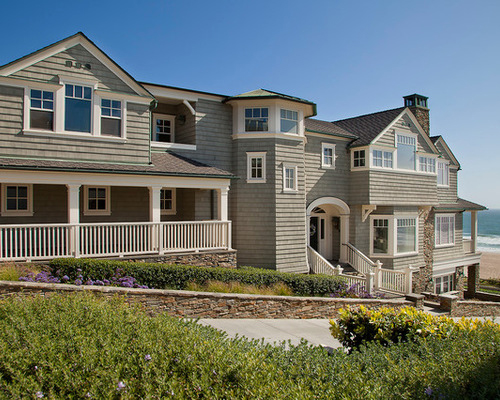 Large first-floor porches. Fast-forward 25 years to the beginning of the 21st century and visit this new California interpretation. "Shingle revival" best describes this once-again popular theme. In contrast to its ancestors and not evident in this photo, this house sits on a tight urban beachfront yet suits its location well. Large first-floor porches and the tower element hugging the main body of the house are common to the style.

Strong rooflines. Roof shapes of the Shingle style vary dramatically from one example to another but always dominate the impression of the house. Gable, hip, gambrel and shed roofs and dormers can all be found on Shingle-style homes; in many cases they can even be combined on one house.

Palladian windows. In this new house, the Palladian window theme is set into two key positions on its elevation, establishing focal points for the complex arrangement of its elements. Classical details were not always found in the style, but when included they were similar to those found in colonial revivals of the same era. 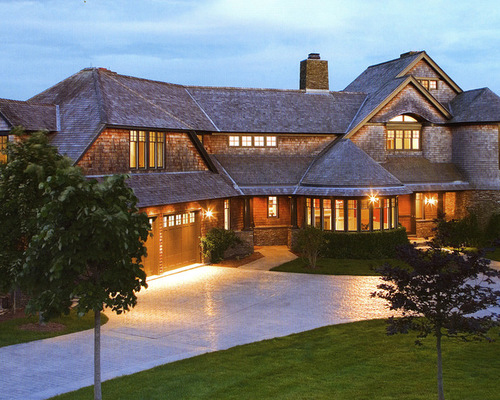 Rambling forms. This new Rhode Island house rests in the Shingle style’s native setting with ease. Original designs emphasized open floor plans and continue to be well suited for modern life, perhaps lending to the current popularity of this style.

Stone details. Though many originals were mostly shingle clad, some combined shingles with stone. 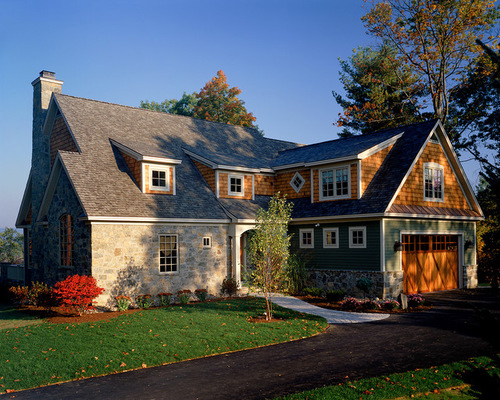