In Touch with Wood 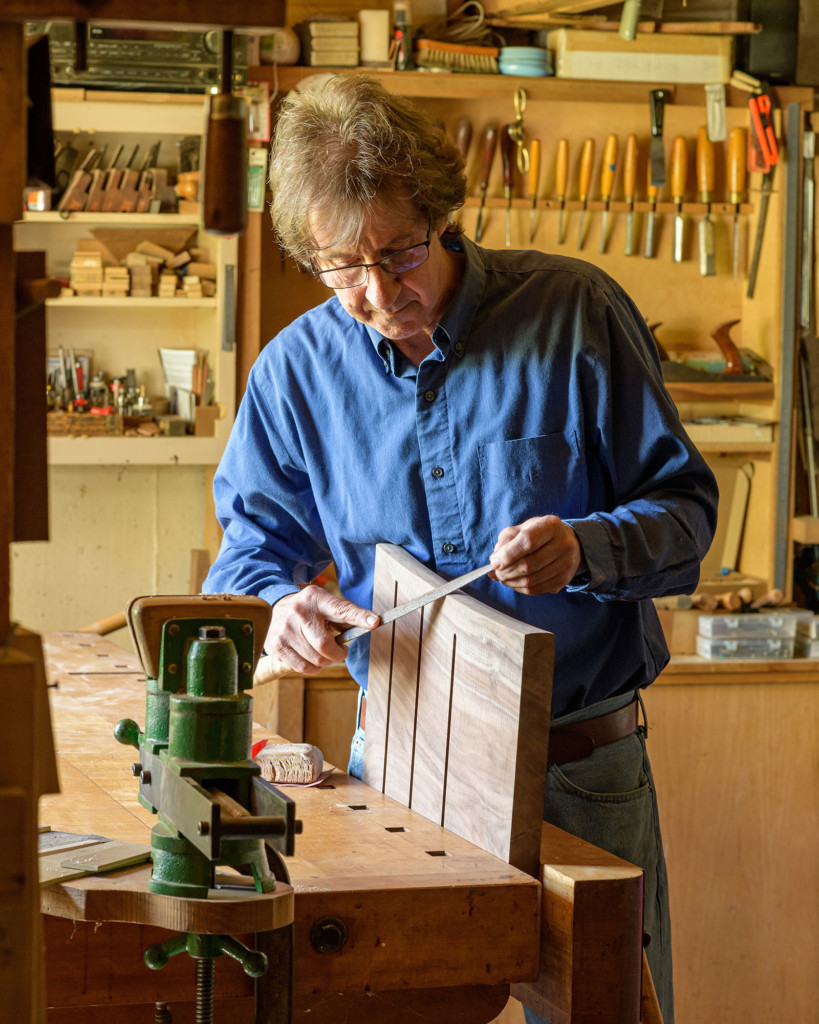 Ted Blachly uses a rasp to shape a curve into a part of a desk he’s working on in his Warner shop.

Ted Blachly began making furniture in the early 1970s when he was a student at New England College in Henniker. For fifteen years after graduating, he made his living restoring old houses while fueling his woodworking interest with repairing musical instruments and occasionally making tables. He returned to making furniture when he discovered Scandinavian design and was drawn to its refined style. John McAlevey—an established furniture maker nearby with a similar design approach—became a mentor.

In 1990, Blachly met Jere Osgood, an award-winning studio furniture maker who also became a mentor; three years later, Blachly started assisting Osgood in his shop. “I wouldn’t be where I am today without him,” Blachly says.

In 1995, Blachly was part of the New Hampshire Furniture Masters’ first exhibition and has been an active member ever since. In 2012, he became the director of the Furniture Masters Gallery in Concord, which features four shows a year. The show that opens September 10 highlights the work of invited artists.

Blachly’s studio is in Warner, where he works on commissions and does occasional exhibition pieces. He has taught at the Center for Furniture Craftsmanship in Rockport, Maine, as well as Penland School of Craft in North Carolina. Galleries that have represented his work include Pritam & Eames in East Hampton, New York; The Gallery at Somes Sound in Somesville, Maine; and The League of New Hampshire Craftsman. Blachly’s work is included in The Currier Museum of Art’s permanent collection, and has been featured in Architectural Digest, Art and Antiques, and Fine Woodworking magazines.

New Hampshire Home [NHH]:  Your work has a signature style of understated elegance. To what do you attribute that?

Ted Blachly [TB]:  I feel like I’ve developed a design language that has a continuity of elements. I’ll add subtle details to distinguish a piece, but my goal is to use gently curved lines and surfaces along with exceptional woods to create gracefully styled furniture that is a comfort to live with.

When I first started out, hand-planed work—along with the elegance of Japanese and Danish design—appealed to me. Over time, all these things melded to create a personal design sense or language. As I’m working, I tweak the shapes and forms, and try to get a piece that’s fully resolved from a design point of view. 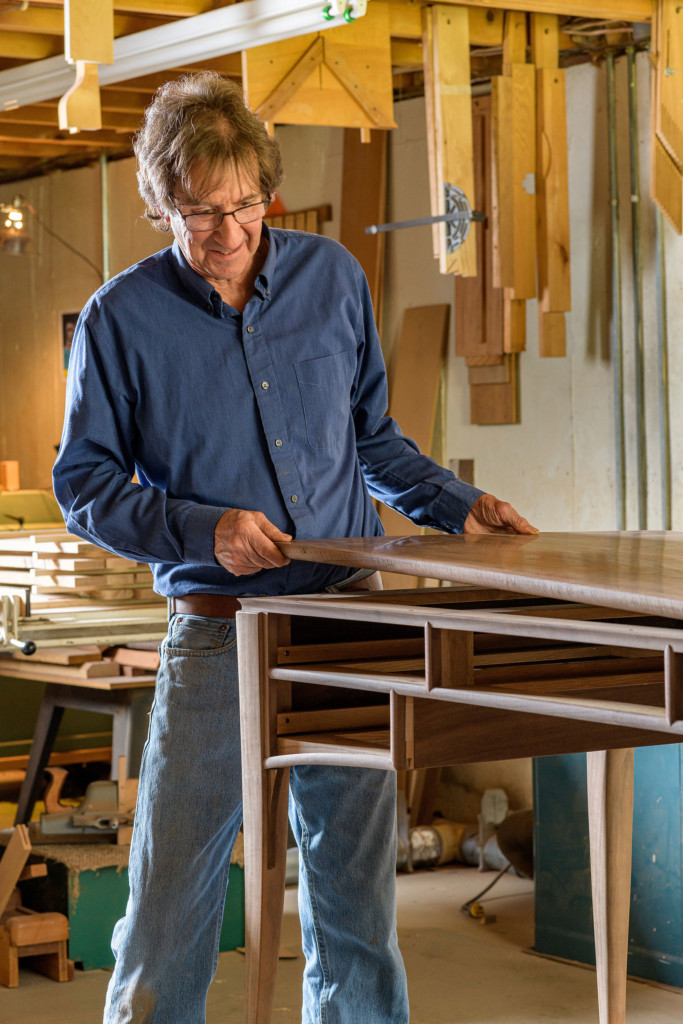 Blachly places the top on the base of a claro walnut desk to check the fit.

NHH:  How do you choose what wood to work with?

TB:  Wood is a material with a great depth of character. I’ll look for color and grain patterns. I like the challenge of figuring out the best way to express the character in each species.

I have some claro walnut boards that I bought five or six years ago that have a “fiddleback” figure, like what you might find in curly maple. This gives the grain a multidimensional quality. I have another massive plank of the same material with an interesting curved shape that would make a fantastic tabletop with a sculptural flair. I recently made two “drinks tables” in spalted maple that have nine-inch-by-nine-inch tops, but there was a lot going on in those little squares.

NHH:  Walnut seems to be one of your favorite woods.

TB:  Actually, I appreciate a wide variety of woods. The walnut you see in most of my furniture I buy in Pennsylvania from two guys who are connoisseurs of fine woods. It grows in California and comes from old orchard trees where they grafted English walnut onto local root stock more than one hundred years ago. These trees are massive and can be five feet wide with big curving branches. The mature trees known as claro walnut were cut and brought to Pennsylvania, where they were sawn into large planks and carefully dried. There is a very interesting array of pattern and color in this wood because of its age and way it grew.

NHH:  What else makes the claro walnut different?

Mark your calendar for October 5, when you can meet Ted Blachly and other New Hampshire Furniture Masters at the group’s annual fundraiser: The Main Event. The evening features a silent auction of the masters’ work along with live
music, a dance performance, artisanal foods and craft beer.

Tickets are $90 until September 6 and $125 after. Order online at furnituremasters.org.

It took me more than three months to complete, as there is a fair amount of complicated joinery for the five drawers and the form has subtle curves everywhere.

The upper section has doors, shelves and compartments for envelopes as well as a computer alcove.

NHH:  What other furniture maker has influenced your work?

TB:  The opportunity to work with Jere Osgood has been a wonderful part of my life. He is one of the great furniture makers both technically and artistically, and has created some of the most sophisticated work I’ve seen. His work has been included in exhibits and museum collections around the world, including the Smithsonian American Art Museum.

In 2015, Jere received the Lotte Jacobi Living Treasure Award from the New Hampshire State Council on the Arts. As a teacher at Boston University’s Program in Artistry, he inspired a generation of furniture makers including (New Hampshire Furniture Masters) David Lamb and Garrett Hack. Jere’s sense of detail and sculptural form commands universal respect.

So when Jere needed help making a large set of chairs, several people suggested he ask me. I worked with him in his Wilton studio two days a week, and his sensibilities rubbed off on me. He instilled in me a sensitivity in approach to design and making. His shapes and designs were very specific, and I realized there was a lot to learn and think about. Through the years, I’ve been fortunate to work with him on a number of projects.

NHH:  What’s the next project in your studio?

TB:  Coming up is a chest of drawers in curly maple, and I’m looking forward to doing something sculptural with the large plank I mentioned—possibly a large, low table. Though most of my work is commissioned, making spec pieces is important. It gives me a chance to innovate and express my ideas of what can be done with great wood.

Ted Blachly says the wood for a client’s ash desk and chair came from a single tree with “popcorn figuring” in the wood. “I also made a large dining table and some smaller pieces from the same tree,” he says. “It was a big one.” 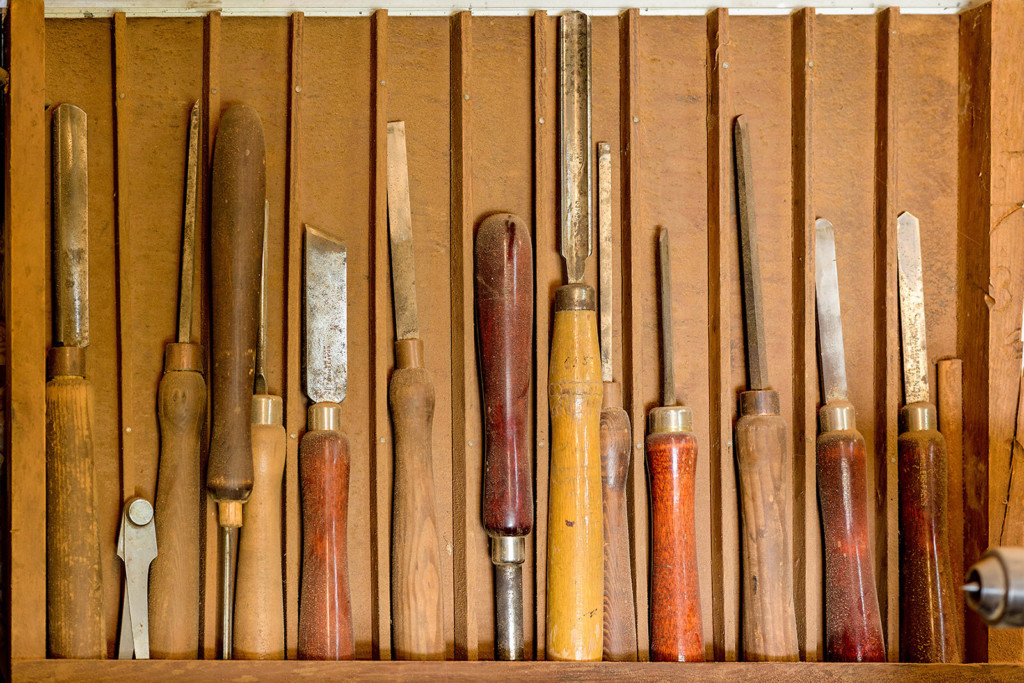 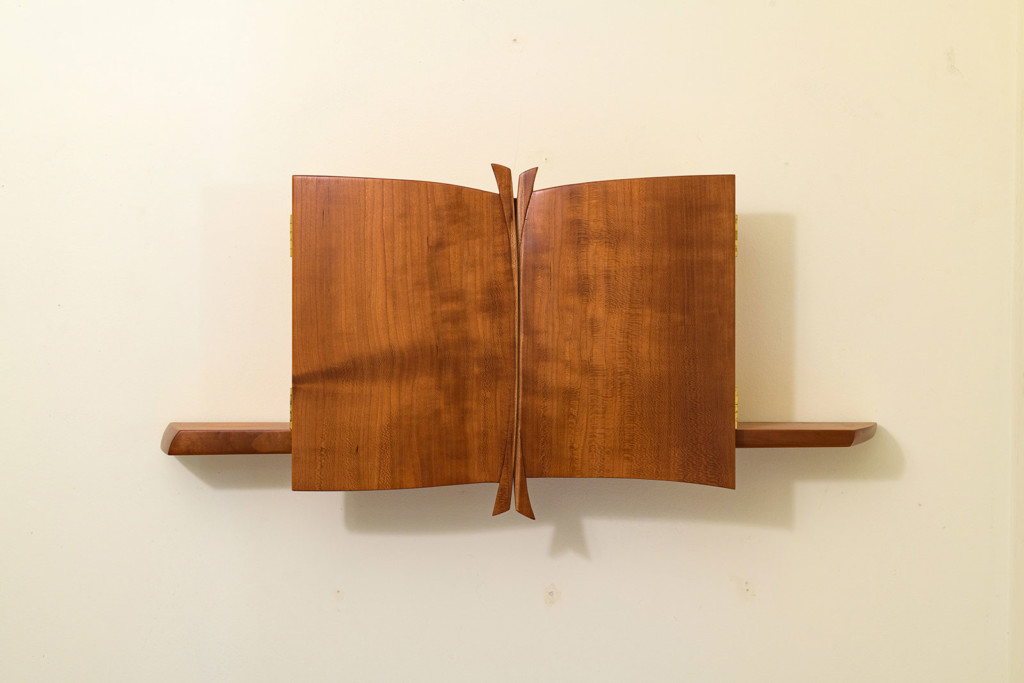 Ted Blachly made this wall-hung cabinet from quarter-sawn cherry; a little dovetailed box inside (see below) was made from Hawaiian koa. “I enjoy the sculptural aspects of furniture making,” he says. 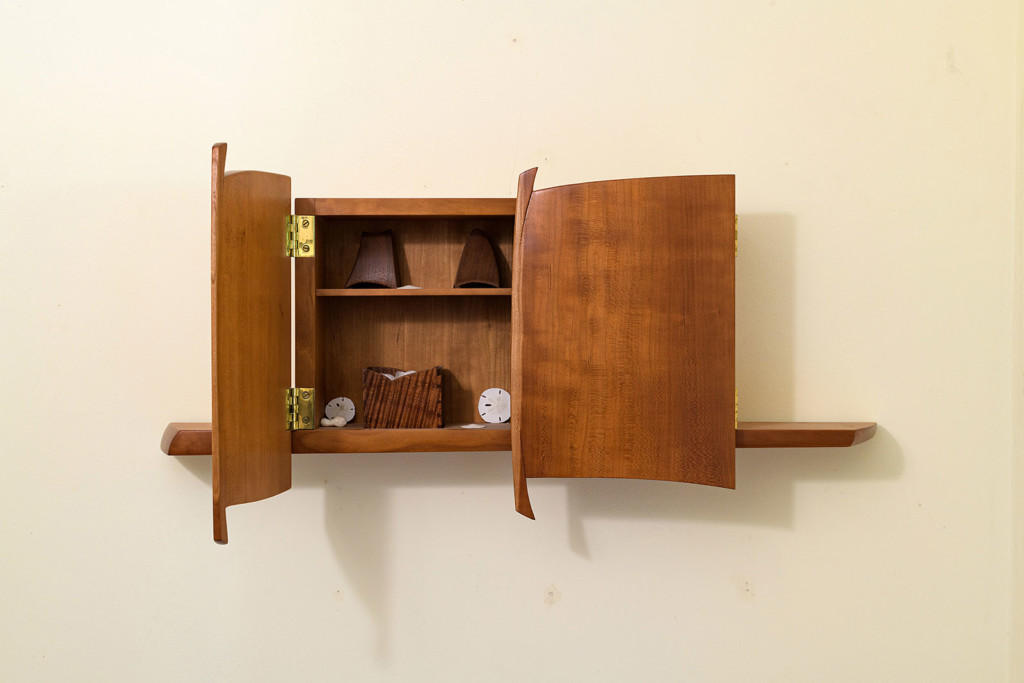 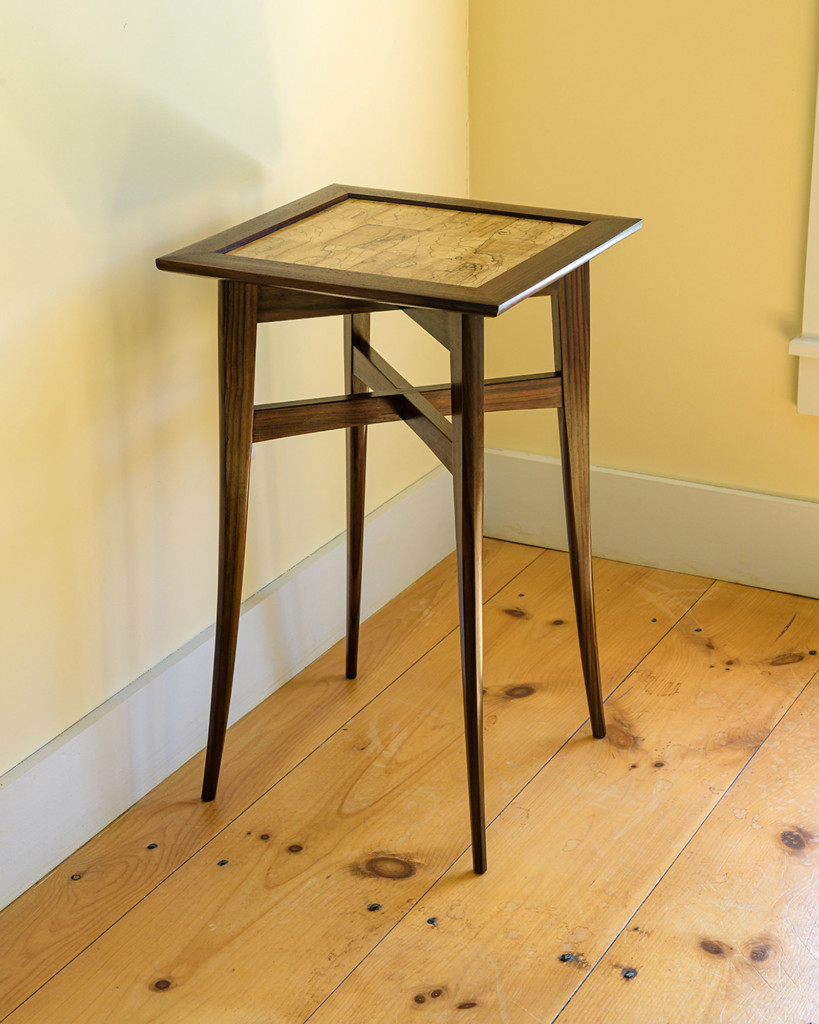 For his piece called Drinks Table II, Ted Blachly paired East Indian rosewood with highly patterned spalted maple. “The graceful legs are an example of my interest in designing furniture with elegant form,” he says.