The creativity of husband-and-wife artists in Northwood is nourished by the landscape that surrounds their home and studios. 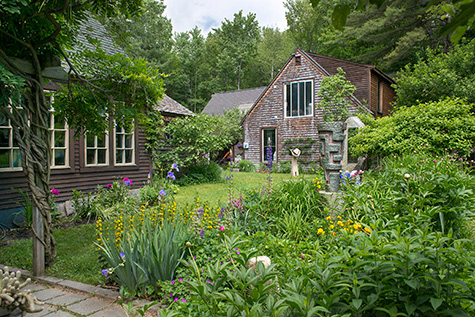 Sculptor Gary Haven Smith built all the buildings on his property, including the shingled studio where he and his wife, glass artist Susan Pratt-Smith, work.
Each day, it’s a short walk to work from the house, through the garden and past some of Gary’s sculptures.

Susan Pratt-Smith and her husband, Gary Haven Smith, are both artists. She works with the most fragile of substances—glass—and he with the most rugged and enduring—stone. Although their choices of media could not be more opposite, they both agree that their gardens are a restful retreat and source of inspiration. “The gardens are peaceful and create an atmosphere of contentment,” Susan says. “They also give me inspiration and subject matter to include in the compositions for my architectural stained-glass and fused-glass wall panels. Sometimes, I use the plants in a literal way, and sometimes they are abstracted.”

The flowers of the Smiths’ garden, as well as trees, rivers and mountains, are represented in Susan’s stained-glass pieces, and her more abstract designs recall the patterns of nature. She creates artwork ranging from elaborate church windows to tiny elegant earrings and also paints watercolors.

Much of the stone Gary uses in his sculptures is harvested locally. Huge granite boulders and glacial erratics are cut using twenty-first-century technology rather than a hammer and chisel, but instead of looking ultramodern, the pieces have a timeless quality. Many of them look as though they were created by an ancient civilization and unearthed in an archaeological dig. “I try to look at our technological lives today and connect them with the natural world we live in,” Gary says.

Looking around the property, there are many different sculptures. Some are tall and twisted-looking with center cutouts; others are shaped like large coils of orange peel or unrolled ancient scrolls; and others have moss growing in the hollowed-out patterns he cut in the stone. It is hard to imagine the sculptures were once just rocks in a gravel pit!

“The glacial boulders have a legacy for me,” Gary says. “They are nuggets of history that have been rolled and tumbled and abraded by glaciers as they traveled on their journey. I use diamond-embedded saws, a large granite wire saw, a sandblaster and carbide-tipped tools to cut, carve and work the granite. The stones are full of fluidity and movement, and I work to release that.”

The sculptures in the Smiths’ yard are constantly changing as new ones are created, and others are taken to shows and exhibits or to new permanent homes. “It is nice to have variety and change,” Gary says. “When pieces come back from a show, we can move them to different places. It gives us different sight lines. The pieces change, with the light as the seasons change, and in the fog, snow or rain.”

How their gardens grew

There are five areas of plantings surrounding the Smiths’ house and studios. “They are not formal gardens, but we add to them every year, often thanks to gracious donations of plants from friends,” Susan says. “The gardens seem to evolve rather than originating from a grand scheme.” The artists’ eye for texture and color is evident in the combinations. The dark red palmate leaves of a Japanese maple contrast with the bright green leaves of the wisteria. Bleeding hearts, foxglove, peonies and petunias echo with the same shades of pink around the garden. Blue iris and lupine complement yellow lysimachia, their color wheel opposite. Garden design is similar to landscape painting. “Textures and things that are important in art and sculpture overlap with gardening,” Gary says.

Susan admits that Gary is the “alpha” gardener, but she helps out by weeding and doing some of the planting. After a long winter, they both look forward to the garden’s blossoms. “The growing season rolls out its many gifts, starting with the crocuses, daffodils and tulips, which were the first things I planted here in the early ’80s,” Susan says. “Since then, I have given many of them away to my friends. There is a history and association of happy memories attached to many of the plants based on this ‘give and take.’”

More than thirty-five years ago, when the Smiths bought their property in Northwood, it was an overgrown field with a neglected apple orchard. “Those trees hadn’t been pruned in years,” Gary says. He set about reclaiming the field and built all the buildings, including their home and studio. “I did not have a bulldozer come in and level the lot. Instead I worked with the grade and in conjunction with the land. I think that is what gives the property a natural and unmanicured feeling,” he says.

Over the years, Gary also has reclaimed the apple trees, pruning to reshape and return them to health. “I consider myself to be a steward of those trees. I love their undulating shapes and the ways in which they change over the seasons,” Gary says.

“He sculpts the trees as he prunes,” Susan says. “Each tree has its unique shape.” She has created several fused, dichroic-glass wall panels that were inspired by the apple trees. Gary is also working his pruning magic on an espaliered apple tree growing on the side of the studio. It was a sprout from one of the old trees in the orchard.

On the south side of the house is a terrace that extends the living room into the garden during warm weather. “This is where we have many summer meals and where we entertain when friends stop by,” Susan says. It is shaded in the summer by a huge wisteria that forms a lush, living roof on the pergola overhead. Gary made the outdoor table from a leftover slab of green Zimbabwe granite. Placed on a boulder, it is a fitting combination of practical and artistic. The terrace is paved with cut squares of slate. At one edge, there is a small koi pond where Misty the dog finds fascinating frogs and colorful fish to watch. “The fish pond completes the tranquil refuge,” Susan says.

Surrounding the terrace is a lovely garden bed filled with peonies, irises, delphinium, cosmos, cranesbill, foxglove and lupine. Many of the plants came from a family friend who was given the distinction of having a black belt in gardening by the Smiths’ son Devon. “She gave us our first peony plants,” Susan says, “and they have become my favorite flower. They are such a treat, given their blowsy beauty, and their fragrance can affect the mood of your day with one deep breath.” The peonies are often the subjects of her watercolor paintings.

Along with the peonies and irises, there is an area of bamboo that is Gary’s favorite. “I love how it sways in the wind and stays green in the winter,” he says. When he is not working on a stone sculpture, Gary creates two-dimensional art using digital photography, manipulating the images in Photoshop. “The garden influences that art. I see things in flowers and leaves that inspire me to move in other directions. It is all part of our world here,” he says.

Since both artists have busy schedules that often pull them in opposite directions, Susan and Gary don’t get to spend as much time in the garden as they would like. “The gardens are mostly full of perennials due to a lack of time,” Gary says.

Sometimes the couple does get to travel together, and last summer, they visited the garden of two artists, Gary and Sarah Milek, who also have created a lifestyle around plants and fine art. Gary Milek is a landscape painter and watercolorist, while Sarah operates a plant nursery and is an herbalist. Together they run Cider Hill Gardens and Gallery in Windsor, Vermont.

Some of the Mileks’ specialties are peonies and hostas. “Peonies have long been one of our favorite flowers, but we were never big hosta fans until we saw the Mileks’ garden. It opened up a new frontier for us,” Gary Smith says. “I have seen the hosta light! We’ll be starting a new bed of hostas this year. I just hope the deer don’t eat them all!” Intrigued by the textural leaves on some of the hostas, Susan and Gary look forward to including the hosta leaves in some of their artwork. “These things are seminal ideas that need to grow,” Gary says. In that way, Susan and Gary’s art—like the gardens—continues to evolve, growing and changing over time.

Gary Haven Smith will be part of the June LaCombe SCULPTURE show A Celebration of Art and the Land on view at the Maine Audubon Center from May 30 through September 30.