Inspired by a Riverside Location

Designers from New Hampshire and beyond updated the interiors of a Shingle-Style home to benefit the Museums of Old York, Maine. 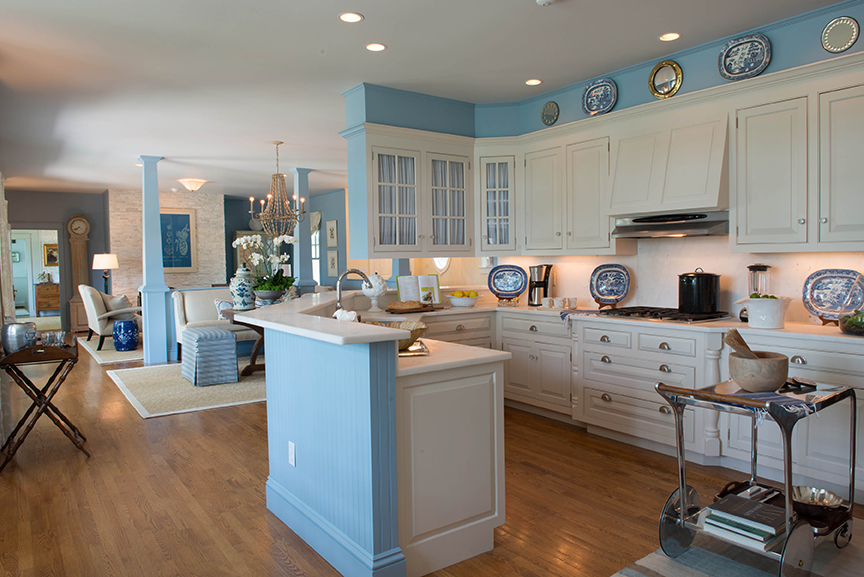 Gerald Pomeroy of Gerald Pomeroy Design Group in Boston was inspired by the home’s proximity to York Harbor for his design of the kitchen, great hall and living room. The three spaces feature Farrow & Ball’s cool Lulworth blue on the walls, and in the kitchen are white Blanco Magnifica marble countertops and backsplash.

With its water views and expansive interiors, Harmon House, the 2012 Decorator Show House benefiting the Museums of Old York, Maine, was a visitor favorite. A departure from the older homes featured on past tours, the home was built in 2000. It’s situated on a high bank overlooking the York River; its architecture evokes an early-twentieth-century, Shingle Style beach cottage, with a large gambrel roof and banks of windows facing the water.

“People really liked the home because it was on the water and in a private, secluded area you don’t typically have access to,” says Laura Dehler, director of development and marketing for the Museums of Old York. “Designers appreciated the home’s newer construction, which meant less preparation up front.”

Harmon House is on the original site of the eighteenth-century Harmon Mansion. Later the site of a hotel, then a school, which burned in the 1960s, Harmon House is in Harmon Park, an area of York that was first settled in the 1600s. The neighborhood was part of a land grant where wharves and warehouses were located; in the nineteenth century, Harmon Park was known for its summer cottages. The current Harmon House, a modern interpretation of riverside living, was designed by Thane Pearson Design of York and built by Rocheleau Custom Homes of York Harbor.

Secret Cove in picturesque Kittery Point is the location for the 2013 Decorator Show House for the Museums of Old York. Opening July 13 and continuing through August 15, this year’s show house features many new designers and more than twenty decorated spaces. A preview party is scheduled for July 12, 6–9 p.m.

Other events include a luncheon lecture series and a first-ever closing night gala August 15. For ticket sales and information about all events, visit www.oldyork.org or call (207) 363-4974.

The York River and the Harmon House’s water views inspired many of the eleven designers who participated in the show house, which celebrated its twenty-third year in 2012. Gerald Pomeroy of Gerald Pomeroy Design Group in Boston transformed the largest spaces in the home: the great hall, living room and kitchen. “Mother Nature was really my influence,” he says. “I was inspired by York Harbor and the vantage point from the back of the house.”

Harmon House visitors enter a small hall that immediately opens into a large, open-concept living space. The living room, receiving area and kitchen—including the walls, door, and window trims and molding—were painted a cool Lulworth blue by Farrow & Ball. The color was the “connecting thread” in the spaces, Pomeroy
says. “The color is so rich,” he continues. “Many people responded to how the color changed with the light.”

In the living room, Pomeroy made the floor-to-ceiling fireplace into a new focal point, covering the surround in silvery moonstone. An unexpected effect, it anchors the high-ceilinged space and ties the room to its outdoor water views. Furnishings, rugs and accessories all had an organic feel, in neutral linen shades and a variety of textures, which connected the living and dining rooms. With his design, Pomeroy demonstrated how the receiving area could be used as a dining space, with stuffed ottomans on casters and a small settee surrounding an octagonal table.

Many visitors were struck by the use of white marble in the kitchen. Blanco Magnifica marble countertops and a backsplash helped create a seamless transition in the space. The kitchen cabinets were painted a rich beige (millwork facing the living spaces were painted Lulworth blue) and enhanced by crown molding. A dining area off the kitchen featured an antique table with new wicker chairs, an unexpected silhouette; windows were dressed with soft Roman shades. Windows throughout the living and dining spaces were framed by simple curtains, which softened the view.

Off the living room, in the master bedroom suite, Meredith Bohn of Meredith Bohn Interior Design in Hollis wanted to create a peaceful oasis inspired by Harmon House’s natural surroundings as well as a sense of privacy. The room’s multiple doors—to the outdoors as well as to the living room and master bath—created a cluttered view. Bohn used a soft blue-gray color palette with neutral furnishings and accessories to echo a seaside feel.

To anchor the space, which had high ceilings, and create a casually elegant appearance, Bohn used wood paneling and hand-blocked, damask-patterned wallpaper panels. “Paneling is a French technique to change the look of a room,” Bohn says. “Together with the wallpaper and molding, it changes the room’s proportions and breaks up the high walls. It brings the room down to human scale, and is more restful and relaxing.”

Painting the molding around the doors and windows in the same color as the walls helped unite the space. Bohn completed the casual elegance of the room with French antiques combined with more contemporary furnishings and artwork.

In the master bathroom, Bohn painted the cabinetry to diminish its bulkiness in the narrow room. She also added new accessories and lighting to update the room and make it open and more like a spa.

For Anne Cowenhoven of Accent & Design, Inc. in York, the study—located on the first floor of Harmon House, off the kitchen—was an opportunity to reconnect with a home she’d previously worked in. She was particularly fond of the study—a long, narrow room, with a large stone fireplace at one end; she designed the fireplace surround as well as the built-in hickory bookcases lining one wall.

For the show house, Cowenhoven oriented the comfortable, neutral-colored furnishings to face the windows looking out over the water. “I was inspired by the lovely texture of the wood in the room and the tone of the stones in the fireplace,” Cowenhoven says. Soft grays and buttery shades found in the beach stones surrounding the fireplace were played up in the draperies and the furnishings. Artwork by local artists gave the room the feeling of a gallery as well as a study.

Helen Hanan of Helen Hanan Interior Design in Newmarket took on two of Harmon House’s more challenging spaces: a first-floor powder room and a former walk-in closet that she transformed into a sewing room.

The powder room has nine-foot ceilings and a large window facing the front yard of the home. “I felt the room had some personality,” she says. Hanan introduced natural elements to the space by painting the room a soft sage green and hanging a mobile with origami birds from the ceiling. The light fixture is hand-painted, hand-fused glass.

Upstairs, Hanan turned a large closet into a sewing room. “It had no windows, a sloping ceiling and no natural light,” she says. “I envisioned it as a stolen corner away from the rest of the home.” She painted the walls a soft gray and installed a versatile closet system that enables the space to be used for more than sewing materials. An antique sewing machine and a Victorian light fixture added drama to the room and gave visitors an opportunity to reminisce about their own
sewing experiences.

An upstairs guest bedroom, by Michael Englehardt of Ethan Allen Home Interiors in Portsmouth, was designed to be an inviting retreat for weary travelers. Again, water inspired the room’s color palette: a soothing combination of neutrals, cool blues and grays. The result is a warm, inviting space that reflects the beauty of the outdoors.

Keeping the theme monochromatic with a European style, Englehardt blended an array of fabrics and bed coverings that complemented the clean lines of the furniture, all from Ethan Allen.

Bedside tables with lamps, an alarm clock and books on ottomans at the foot of the bed reflected an attention to detail. “A guest room sometimes is overlooked in many people’s houses,” Englehardt says. “I wanted to add those details that make people feel comfortable and at home.”

Sloping ceilings and an awkward floor plan presented design challenges for Sue Bartlett of Bartlett Design Associates in Dover. The rooms she selected, originally a television room and a bedroom, were transformed into a family entertainment room and office (in the middle of the entertainment room is a stairwell to the third floor). “I really wanted the two rooms to coordinate with each other and create a calming effect,” Bartlett says. “Visitors really liked the spaces, with their shades of blues, greens and linens. I tried to add interest with the accessories and artwork.”

Comfort and functionality were key in the entertainment/family room, with its slate green and caramel-colored walls. Woven natural shades provided texture, and driftwood tones on the furniture completed a relaxing theme. A highlight was a rattan bar, a unique piece inspired by furnishings found at Truman’s Little White House in Key West, Florida.

The home office, painted in fern green, looks out over the water. A driftwood console and a black desk angled in the space were accented by soft shades of caramel, colors of the ocean and a variety of contemporary artwork. Unexpected
accents—such as a shell lamp, an antique scale and other quirky objects—added visual appeal.

Approximately 4,700 people toured the Harmon House. Although designers’ proposals are approved individually by a show house committee and the designers typically don’t know how other rooms appear until the project is completed, the 2012 show house “worked,” says Dehler of Museums of Old York. “The home’s water views seemed to really inspire everyone.” Which is exactly what a show house should do.