A young family enjoys their light and bright Lakes Region house, newly renovated indoors and out. 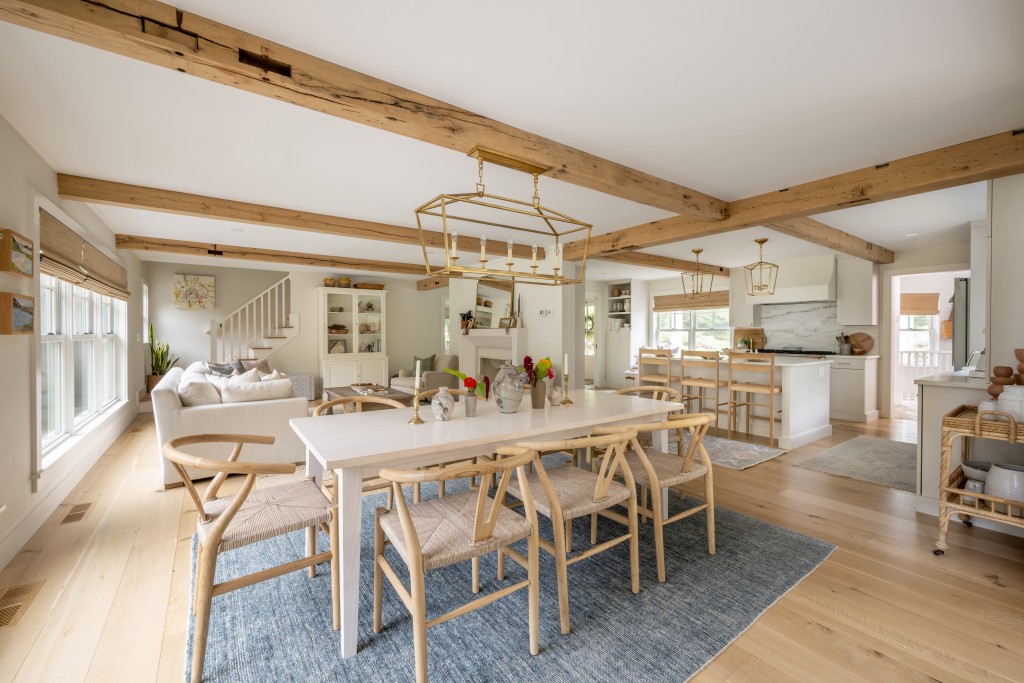 New windows allow sunlight to flood the open-concept living spaces that were previously dark and dated. The new white oak beams and floor also brighten up the home.

When Leah Cushman brought two chairs to Amanda Raymond’s interior design shop, Studio Sage, for reupholstering, she had no idea that upgrading from gray-and-white ticking stripe to nubby, off-white performance fabric would plant the seed for a new and enduring friendship. The two women with similar aged children hit it off—so much so that it led to collaborating on a total refresh of Leah’s New London home, which she shares with her husband, Jon, daughters Carter, 5, and Delaney, 3, and Bodie, a playful Jack Russell terrier.

Those two chairs, sporting their new look, now have pride of place beside a cast stone fireplace in the bright and airy abode set on four acres of woodland not far from Sunapee’s eponymous lake and ski resort. Once husband and wife decided to launch head-first into a major renovation, they assembled a team that, in addition to Raymond, included architect Frank Anzalone, builder Jonathan Bennett and Chris Collins of Warner Stone for the landscape. 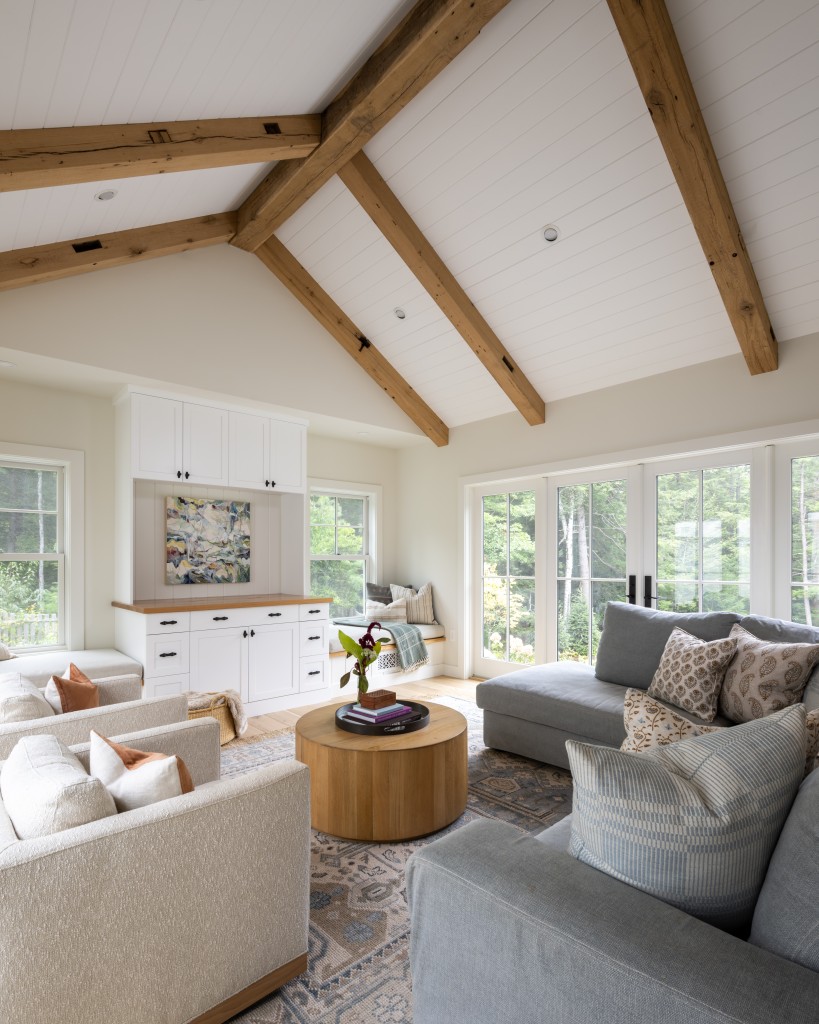 Occupying space that was once a little-used screened porch, the vaulted family room is a sunny, comfortable place to relax. The TV disappears into the cabinetry when the family would rather read, play games or entertain.

The Cushmans purchased the house in 2016, moving in right before their wedding. A few years later, with two little girls in the picture, the house was simply not working for them, neither functionally nor aesthetically. “It was a very dark house—dark shakes on the outside and green trim, a classic woodsy style, with a very dark interior, too,” says Leah, who has the sensibility of an artist, which she is. She loved the neighborhood, especially the house’s location on a cul-de-sac that reminded her of the Simsbury, Conn., house she grew up in. “I didn’t want to move, and I didn’t really want to build a new house, as great as that can be,” she says. “I was feeling really stubborn.”

Previously, the house had undergone a few minor renovations, and that’s when they met Jonathan Bennett, the builder who at that time renovated their primary bathroom. Concurrently, they made some cosmetic changes, like painting the house, inside and out, and replacing the carpeting. These quick fixes allowed them to buy some time, but eventually, they reached a point where more changes were needed to satisfy them and to reflect their vision for the future. “We figured we were going to spend the next 20 years here,” says Leah.

The Cushmans reached back out to Bennett, who became the homeowners’ go-to throughout the design-build process they were about to embark on. The builder and his team, known for meticulous work, replaced all the windows, redid the kitchen and, leading into it, added a mudroom, laundry room and bathroom.

For his part, architect Anzalone listened as the couple explained that among other issues they wanted resolved were a screen porch they didn’t use and the kitchen’s dysfunctional layout. “In general, nothing flowed,” says the architect. “They had all this square footage (3,400 square feet) but the house always felt tight and awkward. And no matter what time of day, it was dark inside.” 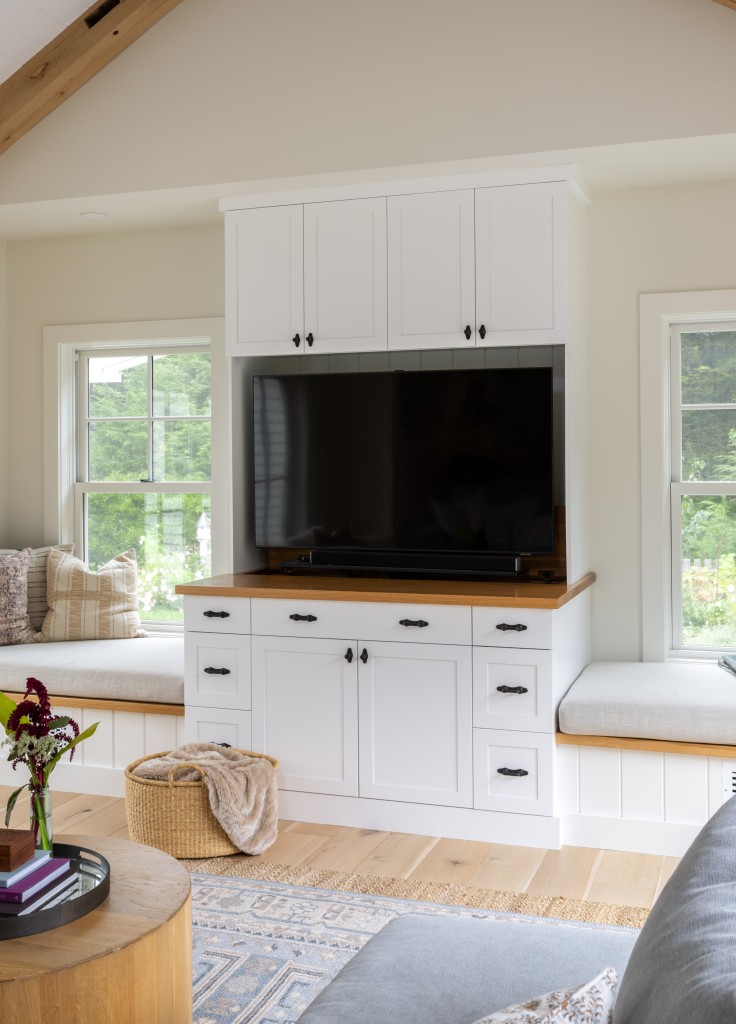 Occupying space that was once a little-used screened porch, the vaulted family room is a sunny, comfortable place to relax. The TV disappears into the cabinetry when the family would rather read, play games or entertain.

The first order of business was tearing down the little-used screen porch that was on its last legs and replacing it with a family room where the kids can play and guests can mingle away from, but within earshot of, the kitchen. The room’s vaulted ceiling covered in white-painted V-groove brings a welcome airiness to the space that is further enhanced by two sets of French doors and new picture windows beefing up the glassiness of the southeast wall. Not only do the new doors and windows allow more sunlight to stream in, they are also more energy efficient, which enabled the homeowners to upgrade their heating system. Bennett installed central air conditioning and radiant-heat floors throughout.

It was easy to understand why the kitchen didn’t work. Walking in from the mudroom, “the first thing you saw was a black-topped island set at an odd angle that wedged you toward the sink,” describes Anzalone. “You could walk around it, but psychologically it blocked you.”

Repositioning the island was one piece of the puzzle in reconfiguring the kitchen, but it was the stove, a handsome white Lacanche range with brass trim, that played the larger role in how the kitchen is laid out. “I love old houses, and since this one isn’t old, I wanted a European-style stove that would have a transitional look,” says Leah, who was also attracted to the Lacanche’s powerful oven. “My passion is baking, so that was part of the motivation.” 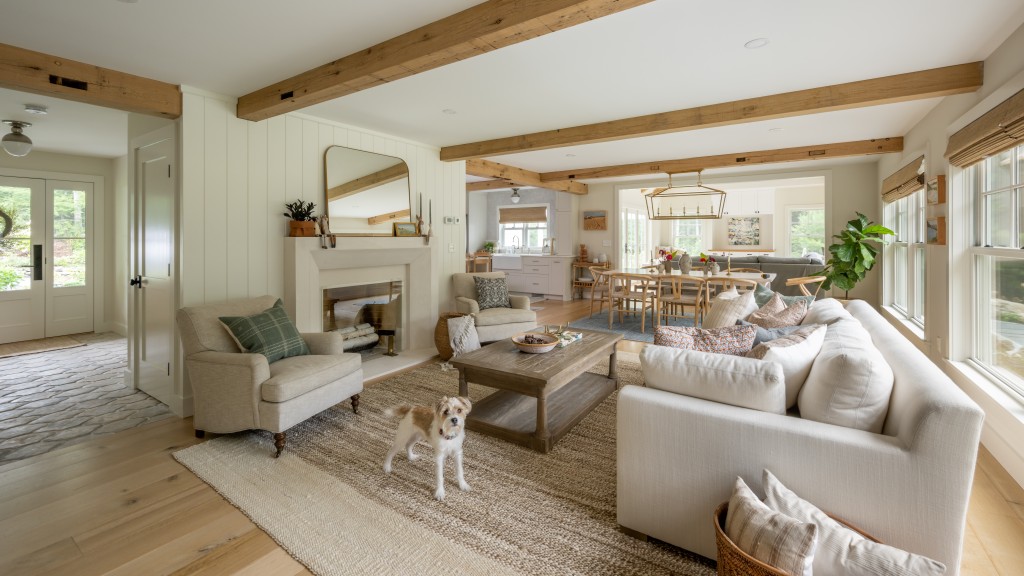 With the range as the centerpiece, other elements fell into place. Supporting Leah’s desired lived-in aesthetic, the countertops and backsplash are marble, which will etch and wear nicely over time, even though it’s quite durable. The Fireclay farmhouse sink (there’s another in the laundry room) has a timeless look that complements the custom Cabico cabinetry from Shaker Hill Granite Company.

In its new, more functional and prettier incarnation, the kitchen is an inviting space to prepare food and to grab a quick bite at the island. There’s a large built-in storage closet, a nook for cookbooks and a deep and inviting window seat with a view of the front gardens. Glass-paneled pocket doors can be pulled to separate the kitchen from the front hall without blocking the view. Bennett and his team removed brickwork and old hemlock beams, installing white oak beams to complement the character-grade white oak floor. They also built a new range hood, covering it with smooth-textured and neutral-colored plaster.

A sweet transitional space with a wicker bar cart and a small Amy Wynne oil painting from nearby Candita Clayton Gallery leads into the dining area where a table and eight wishbone chairs blends into the living spaces on either side, the family room and the living room. 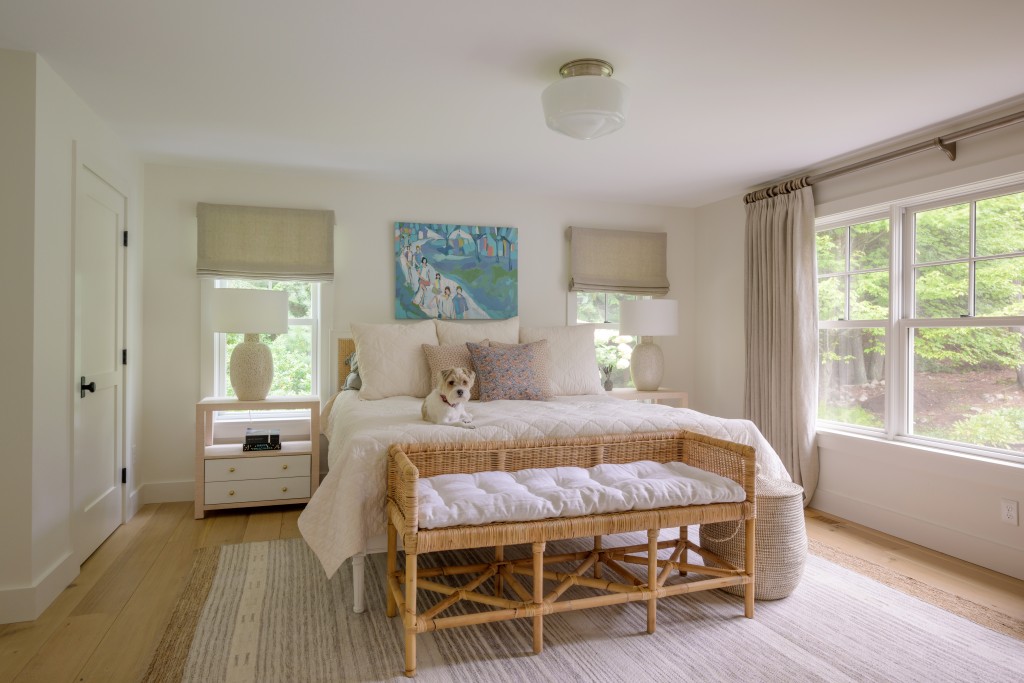 As in the rest of the home, the primary bedroom sports a neutral color palette with texture brought in through the window treatments, rug and foot-of-the-bed bench.

“The home is open concept, and throughout you see a continuity of palette,” says Raymond, who carefully selected just the right shade of white paint for the space. In contrast to Seacoast homes, where Raymond might use a pure white hue and light, gauzy fabrics, here, in the more rustic lake environment, she opted for a white with some warmth to it and paired that with textured fabrics.

Leah weighed in on many decisions, including block print fabric for both some pillows and a pair of recovered ottomans. “What was great about this project was that Leah participated more in the design than a typical client would,” says Raymond. “She has an unbelievable eye and an artist’s vision.”

Against the whites—Benjamin Moore Dove Wing walls and White Dove trim—the accent colors are a nice balance of warm and cool tones, with grays, blues, rusts and dusty rose predominating. This layer of a well-rounded color palette against the neutral background of the whites pulls in warm tones from the concrete floor tiles used in parts of the home. “Adding layers on top of layers is what makes this space feel so comfortable and lived-in,” notes Raymond.

Just as the interior design pulls elements in from the rustic outdoor environment, the architectural intent ensures a flow from the outside-in and vice versa. “Because they have a nice, private yard, being able to see outside changed the interior space,” says Anzalone, who, by incorporating two sets of French doors in the family room, linked a pair of outdoor spaces to the indoors. One is a stone patio that you can see from the kitchen, with a trellis. The other, south-facing patio has stone steps leading down to it. “When you live here (in New Hampshire) you should feel like you have a connection to the outdoors,” says Anzalone. 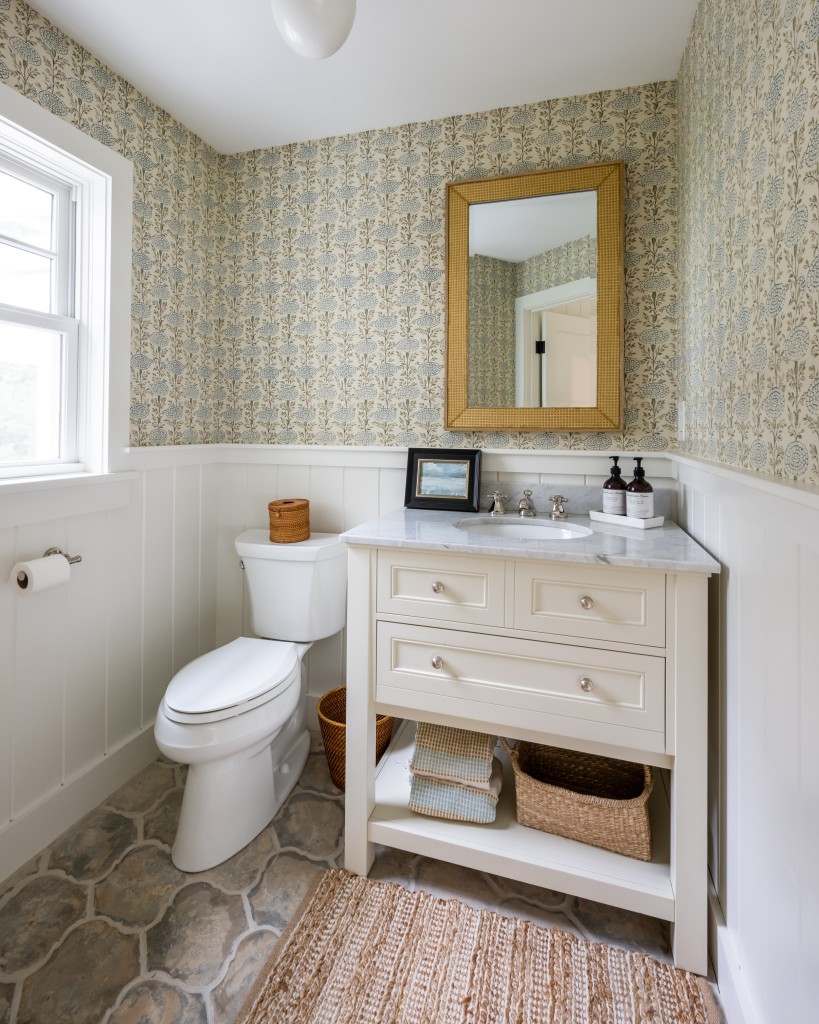 The finishing touch in the powder room is the Lisa Fine “Samode” wallpaper, hand-printed on clay-coated paper.

Like Anzalone, the Cushmans, a family that likes to swim, ski and hike, feel strongly about a tie between their house and the land surrounding it. “We have so much glass in the house, we wanted everything to transition well from inside to outside,” shares Leah, who is as passionate about gardening as she is baking.

“The landscaping was a design-build with Leah,” says Porter Weeks, project manager at Warner Stone, which executed a design drawn up by Gradient Landscape Architects. “Our overall goal was to develop what was built as an outdoor entertaining space and also to establish an open, level area where the kids could play.” To this end, Weeks and Warner Stone owner Chris Collins used bluestone—a combination of oversized, irregular slabs for walkways and dimensional pieces for the main gathering spaces. Woodbury gray granite was chosen for most of the steps. In addition, boulders, many found on site, were used in the creation of terraced spaces. “A lot of the material choices that were extended into the landscape were to reinforce a lot of the interior design,” says Weeks. 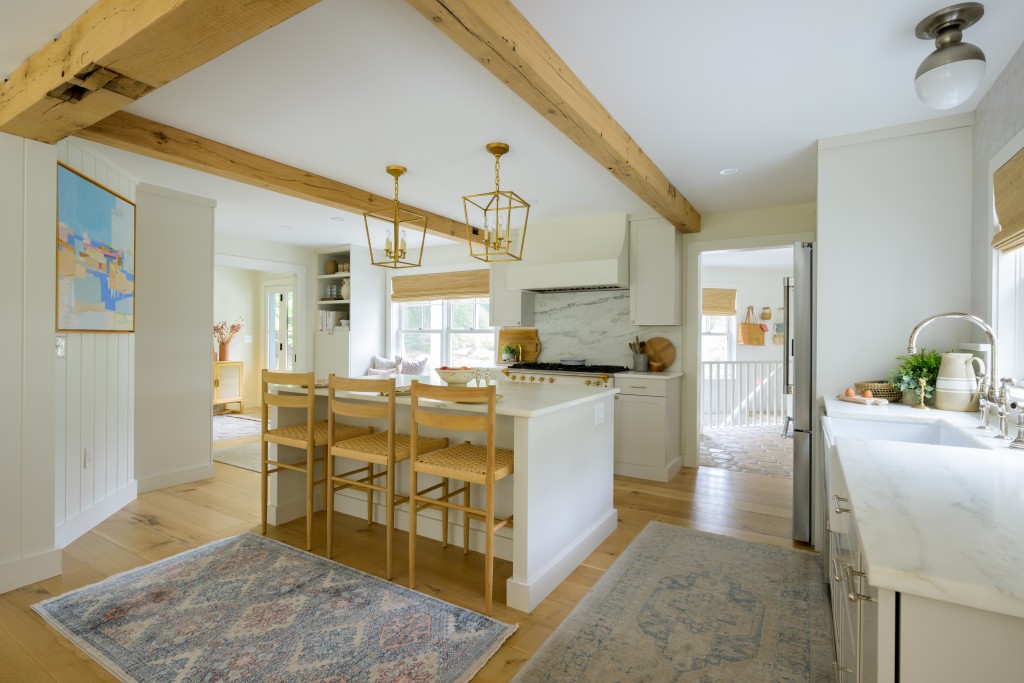 A new and repositioned island allows a much more efficient circulation pattern from the mudroom area into the kitchen and beyond.

The planting plan is free-flowing and includes varieties that guarantee bloom color from early spring into late fall. Featured among the 20 or so species are native catmint, allium, plethora and cornflower, and non-native iris, peonies, geraniums and salvia. “My girls help with digging and planting bulbs and picking flowers,” says Leah, who looks forward to planting raised beds come spring.

Added into the landscape as one-gallon and four-quart specimens, the flowers and shrubs will fill in nicely over the years as they mature. Likewise, the house—conceived with the future in mind—will age well.

“One of the things I love about this house,” says Raymond, “is that Leah and Jon designed their home to incorporate their children now and as they grow.”

As for the homeowners,  We’re really happy,” says Leah. “It all finally came together.”