A Jackson couple is reviving the lovely style of the Hudson River and White Mountain Schools of landscape painting. 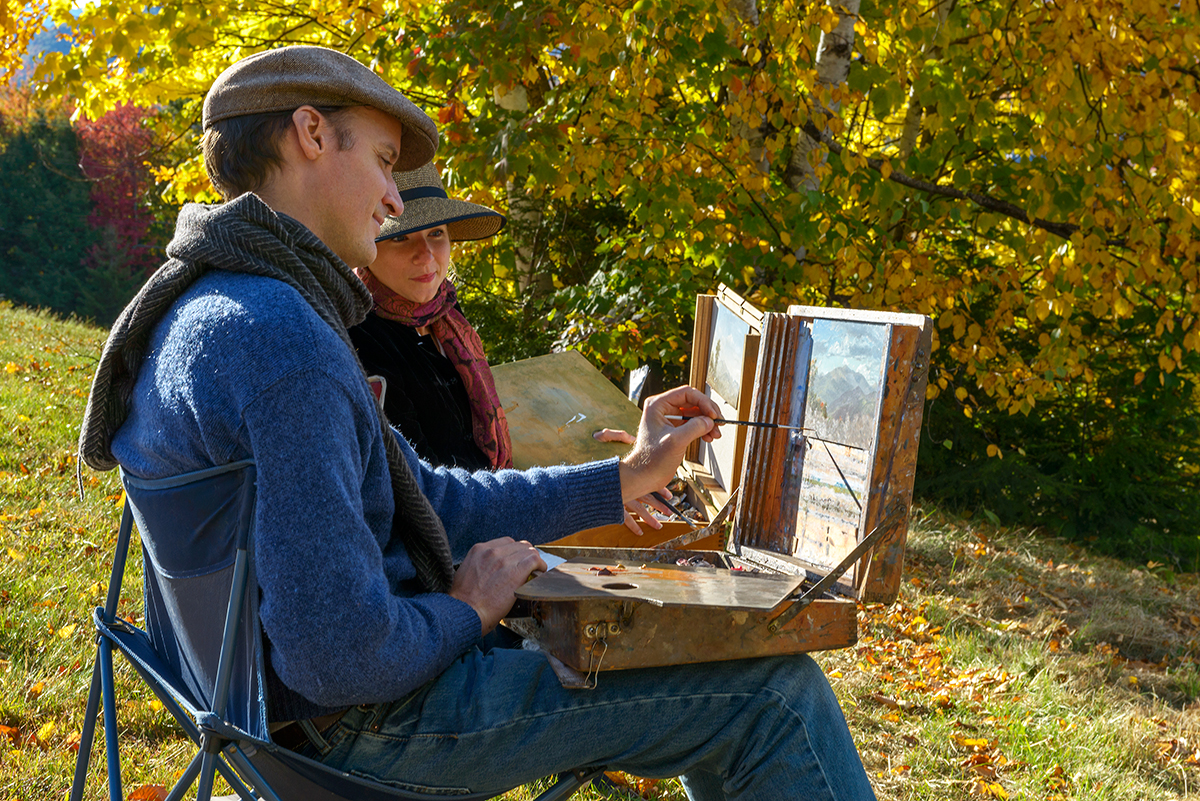 New Hampshire’s White Mountains have fascinated artists for more than a century. In the nineteenth century, artists, intrigued by the region’s both tame and wild beauty, traveled north to paint what they considered a unique landscape. By documenting and romanticizing the region through their paintings, these artists—later called the White Mountain School of painters—were trying to define America and its democratic ideals through their work.

“Erik and Lauren have the understanding of, and ability to create, the same atmosphere and subject on canvas as nineteenth-century artists,” says Randy Bennett, executive director of the Bethel Historical Society in Bethel, Maine, which has twice exhibited the couple’s work. “The atmospheric layering in their paintings gives their subjects a three-dimensional quality. That’s not easily accomplished.” 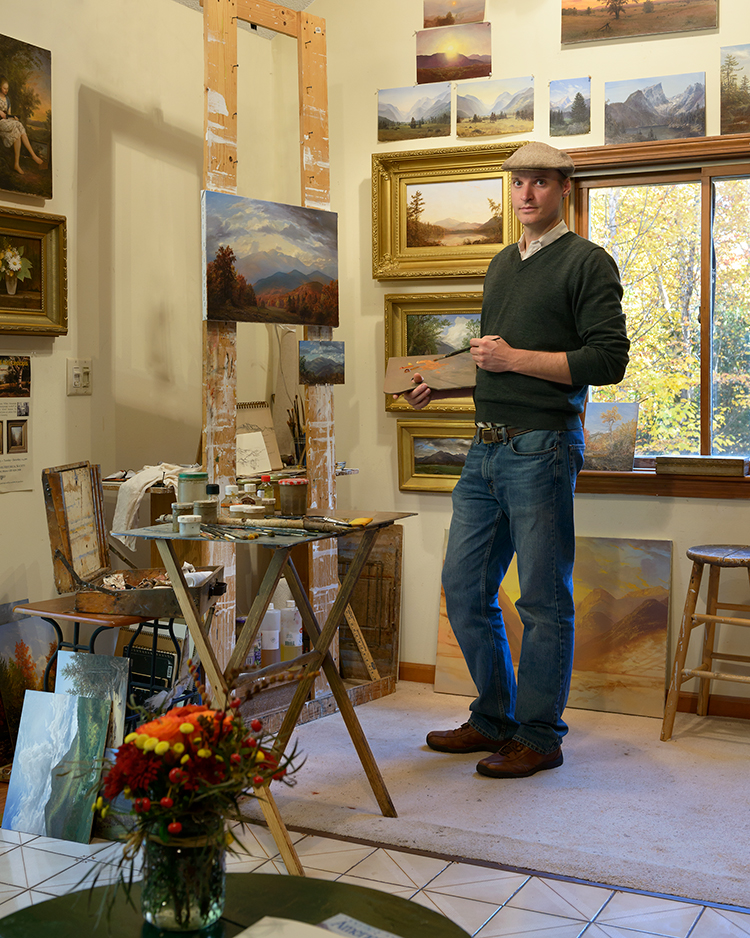 Erik Koeppel puts finishing touches on a painting in his studio.

“You look at their paintings and you swear they’re by masters from the White Mountain School,” adds Warren Schomaker, executive director of the Jackson Historical Society.

Koeppel is originally from Oregon but moved with his family to the White Mountains when he was ten. Formally trained at the Rhode Island School of Design and the New York Academy of Art, his award-winning works have been exhibited and collected internationally and regularly exhibited alongside the masters whose techniques he emulates, including Cole, Winslow Homer, John Frederick Kensett and George Inness.

Sansaricq is from New York’s Hudson River Valley, a landscape that inspired her and eventually led her to the Grand Central Academy of Art in New York City. In addition to group exhibitions, her work was the subject of a solo show in New York City in 2011, and she’s received many fellowships and awards.

The couple met in 2009 during a fellowship program in New York’s Catskill Mountains and have worked alongside each other ever since.

New Hampshire Home (NHH) asked Koeppel and Sansaricq about their inspiration and their art.

Sansaricq: I’ve always loved the Catskills and the Hudson River Valley. I studied with a landscape painter in high school and wanted to achieve a more traditional approach in my painting. I went to Grand Central Academy of Art, where training is very much based on an old Beaux Arts model, and you draw from life models. I attended the school’s Hudson River Fellowship, which also tries to keep alive traditional painting techniques. (Editor’s note: Sansaricq and Koeppel are now instructors for the fellowship, which they host in Jackson every summer).

Koeppel: We lived in New York City and traveled to Jackson for two months in the summer to paint studies, then returned to New York to create studio paintings in the winter. We moved here because we felt the landscape was unique. The White Mountains are known for their pastoral farm landscapes, Saco River plains and the wild, rocky landscape of the notches. It’s interesting and filled with variety.

NHH: Tell us why artists like you are reviving the styles of the Hudson River and White Mountain Schools.

Koeppel:  The message of this painting style is very relevant today. People really respond to this style because it’s straightforward and honest. During the country’s early years of industrialization, the Hudson River School artists were among the first environmentalists. They painted wild, beautiful places like Niagara Falls, which were once pristine and then became commercialized. The popularity of their work spoke to how beautiful the country was and the importance of conserving special places.

We should embrace and celebrate nature, especially today, and preserve the vistas we paint. Today, there’s a lot of editing we do to create these pristine scenes: removing utility poles and wires, asphalt roads and contemporary buildings.

NHH: What inspires your work?

Sansaricq: My different experiences in nature. We paint outdoors together during the summer, mostly small- and medium-scale studies. We then bring those studies back to our studio and create larger, studio paintings.

Koeppel:  I’m inspired by my time spent outdoors; that interaction with nature informs my paintings.

We don’t use photography at all. If we do a large painting in the studio, it’s from those small drawings, paintings and the poetic memories of those studies. It makes our paintings more human and expressive when we create from our studies and our memories.

Sansaricq: It’s really worthwhile to be outside to paint on the spot, to see the light and clouds and the scene change. 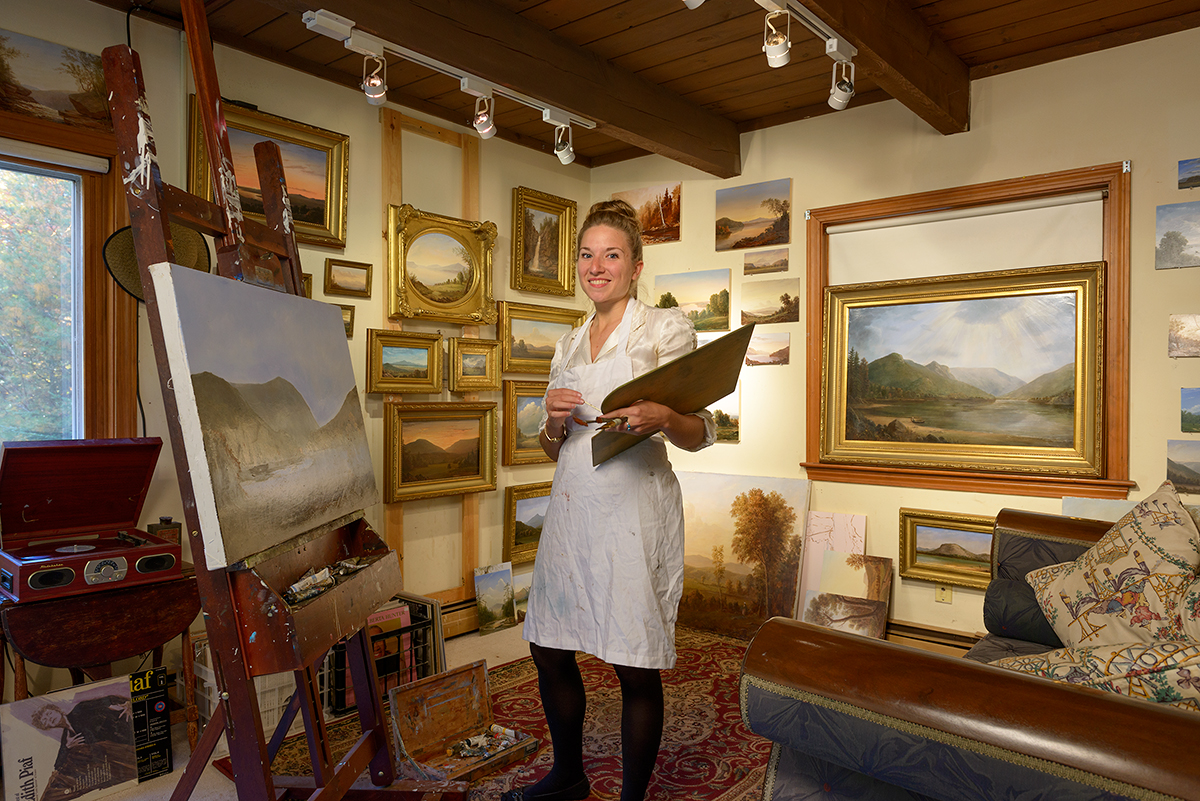 Sansaricq: I have so many! I love views of Mount Washington and all the notches—Pinkham, Franconia, Crawford. It really depends on the day, where we’re sitting, the light.

Koeppel:  I go through phases where I’ll do numerous studies of a peaceful, pastoral landscape, or a wild, sublime stage where I paint rocks, dramatic color and wild scenery. We have our favorite haunts.

NHH: How do you work together?

Museum of the White Mountains at Plymouth State University
(603) 535-3210
www.plymouth.edu/museum-of-the-white-mountains

Sansaricq: We paint outdoors together, but if we’re painting the same spot, we’ll come back with different paintings.

Koeppel:  We’ve been painting together for six to seven years. Our inspiration takes us different places. We paint in the same location, but any differences have to do with our personalities and what we’re trying to explore at the time. I may be painting a stormy scene, Lauren may be working on a sunset. We’re not competitive with each other.

NHH: What do you do when you’re not painting?

Koeppel: We play ragtime and Americana style music from the 1920s and ’30s as Miss Maybell & Slimpickin’s. Lauren has a smooth, jazz vocal, and plays ukulele, banjo, washboard and kazoo. I play finger-style guitar and sing. We’re performing all over New England and in New York.

I think there’s a relationship between our fascination with the early jazz age and nineteenth-century paintings. We’re nostalgic for a time when things were more honest.

Sansaricq:  When we’re painting, we’re at home alone every day. Our music enables us to meet people. It’s fun. 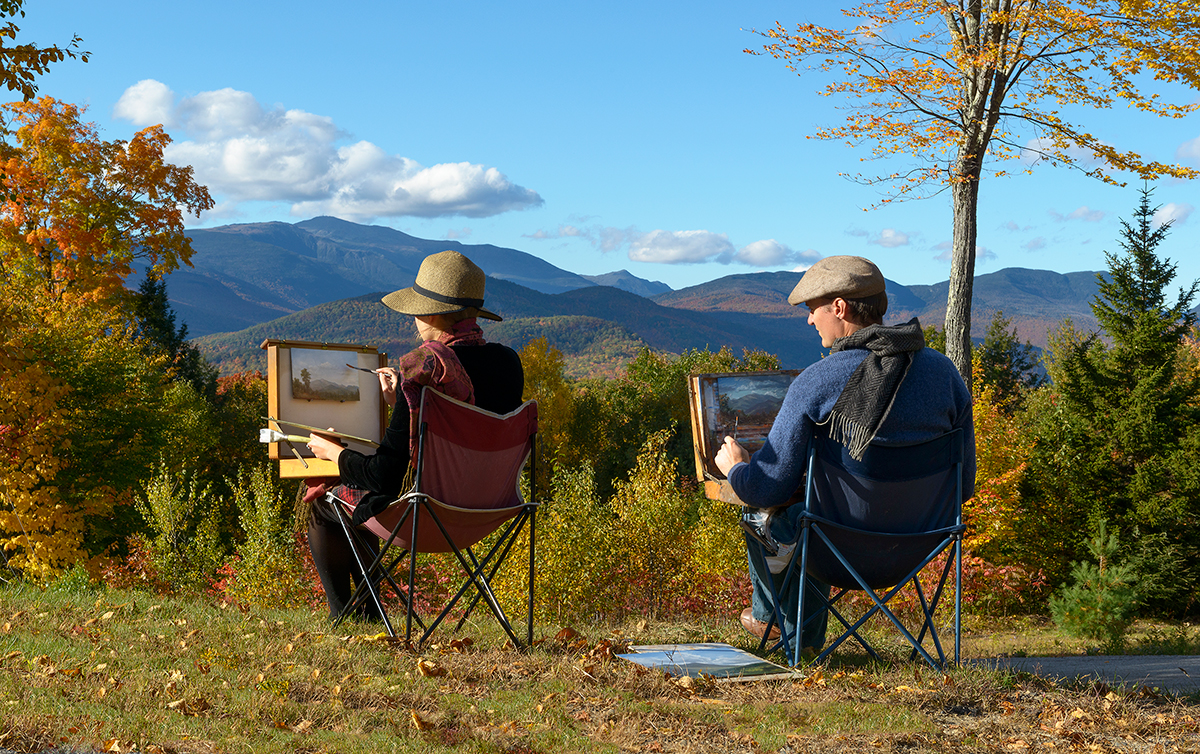 Mount Washington and other mountains in the Presidential Range make dramatic subjects for Eric Koeppel and Lauren Sansaricq on a picture-perfect fall day in Jackson.
Categories: Artwork and Design