LEDs: A Bright Future for Kitchens

LEDs are becoming the first choice in lighting design.

The biggest thing since the invention of the light bulb just may be another light bulb.

LED (light emitting diode) is a semiconductor-based technology often used on electronics equipment or for indicator lights (think of the blinking lights you see on your computer or telephone). A technology that was invented more than seventy years ago, LEDs are in theaters, restaurants, and areas where dramatic or dynamic color displays are found. Even the Louvre illuminates the famed Mona Lisa using specially designed LED spotlights.

One of the most exciting uses is in homes, where LEDs can be almost anywhere: linear lighting bars, track and rail fixtures, cabinets and stairways, along a kitchen backsplash. In fact, LED lighting is quickly becoming the lighting source of choice in new homes, landscape design, office buildings and municipal structures.

“The technology of using LEDs in places where traditional light sources are used is, not to be cliché, developing at the speed of light,” says Vic Reno, of Reno Engineering & Light Design in Marlow.

The whole country seems to be moving in that direction, too, as some incandescent bulbs—the traditional light bulbs used in many homes—will not be available in stores by next year.* In fact, the fast-moving advances of LEDs are leaving many homeowners with two lighting choices: LED bulbs or compact fluorescent lights (CFL), the opaque, often spiral-shaped, lights. But it’s LEDs that have lighting experts and designers buzzing.

“Lighting is so important to how a house looks and feels,” Reno says. “People building or renovating their homes, or just replacing fixtures, need to think about LEDs.”

What is an LED?

LEDs operate by the movement of electrons through and across layers of semiconductor material. LEDs produce the white and colored lights in many products, including computers, integrated light fixtures, even some of the bright lights of Times Square in New York City. The technology’s popularity has only increased, especially since
passage of the Energy Independence and Security Act of 2007. The U.S. Department of Energy suggests that adoption of LED lighting by consumers by 2027 could save Americans $265 billion in lighting costs.

Lighting designers and engineers like LEDs for several reasons: 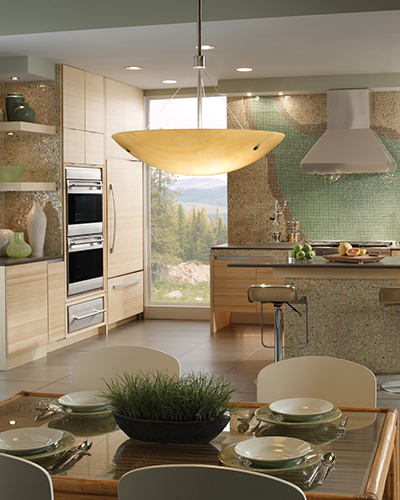 Photography courtesy of The Lighting Showroom

The recessed can lighting and the Larkspur suspension light (an LED retrofit is available for this fixture) in this kitchen and dining room are by Tech Lighting and available from The Lighting Showroom in Bedford.

“In general, LEDs use 75 percent less energy than conventional incandescent bulbs,” says Wendylee Brown, owner of The Lighting Showroom Corp. in Bedford. “Unlike halogen lights or fluorescents, LEDs are resistant to temperature changes or vibrations.”

Because of its design, an incandescent or CFL bulb in a recessed-can fixture is inefficient, often wasting more than 50 percent of light from the lamp. This means most of the electrical energy supplied to incandescent bulbs is converted to heat instead of light. Since LEDs consume a lot less energy, they don’t emit much heat. “It used to be that you had to accommodate in your lighting designs how much heat a light threw off,” says Shannon Alther of TMS Architects in Portsmouth. “LEDs can be used effectively now in small spaces, like bathrooms, cabinets, and drawers without adding significantly to heating loads.”

Higher quality light. A high-quality LED bulb can cast light in one direction, making it well suited to task lighting. Sue Booth of Vintage Kitchens in Concord favors LED lighting for these types of applications: under cabinets, in drawers and closets, and along stairs. “It’s inconspicuous, long-lasting, energy-efficient and doesn’t get warm like other under-cabinet lighting,” she says. “We also use the technology as accent lighting inside glass or open-shelf cabinetry.”

“These products are small and generate very little heat so they can be used in hard-to-reach places like drawers, backsplashes, under or inside cabinetry,” says Cindy Regnier, senior lighting designer at The Lighting Center at Rockingham Electric in Newington.

Regnier and Reno have also used LEDs to highlight architectural details, such as ceiling coves.

Environmentally friendly. In addition to saving energy, LEDs don’t contain hazardous materials, such as mercury or lead, making them less likely to poison a landfill.

Flexibility and programmability. LEDs can be used in many settings, from offices, schools and parking garages, to homes and outdoor landscapes. LEDs are also programmable, making them a good choice for security lighting as well as landscape design, where they are used almost exclusively.

LED bulbs can cost considerably more than CFL bulbs. However, the good news is that prices are coming down. “There’s no reason in a new home or renovation that you can't use LED lighting,” Reno says. “It’s more money up front, but you’ll
save on maintenance, operation and energy.”

Quality and consistency are also important. “LED design is key,” Brown says. “Poorly designed LEDs can flicker, change color or provide uneven light, and can fade or burn out over a short period of time.” A good LED component will have fewer inconsistencies in color, intensity and durability. Brown recommends working with a lighting expert who can review your project and direct your purchase. “If you decide purely on cost and end up with a low-quality LED system, you may end up buying another one,” she says.

The future is bright for LEDs.

Whether used in a wall sconce or part of an overall home-lighting system, LEDs are here to stay. “There's really nowhere they can't be used,” Regnier says.