A skilled artisan perfects his techniques and creates award-winning designs. 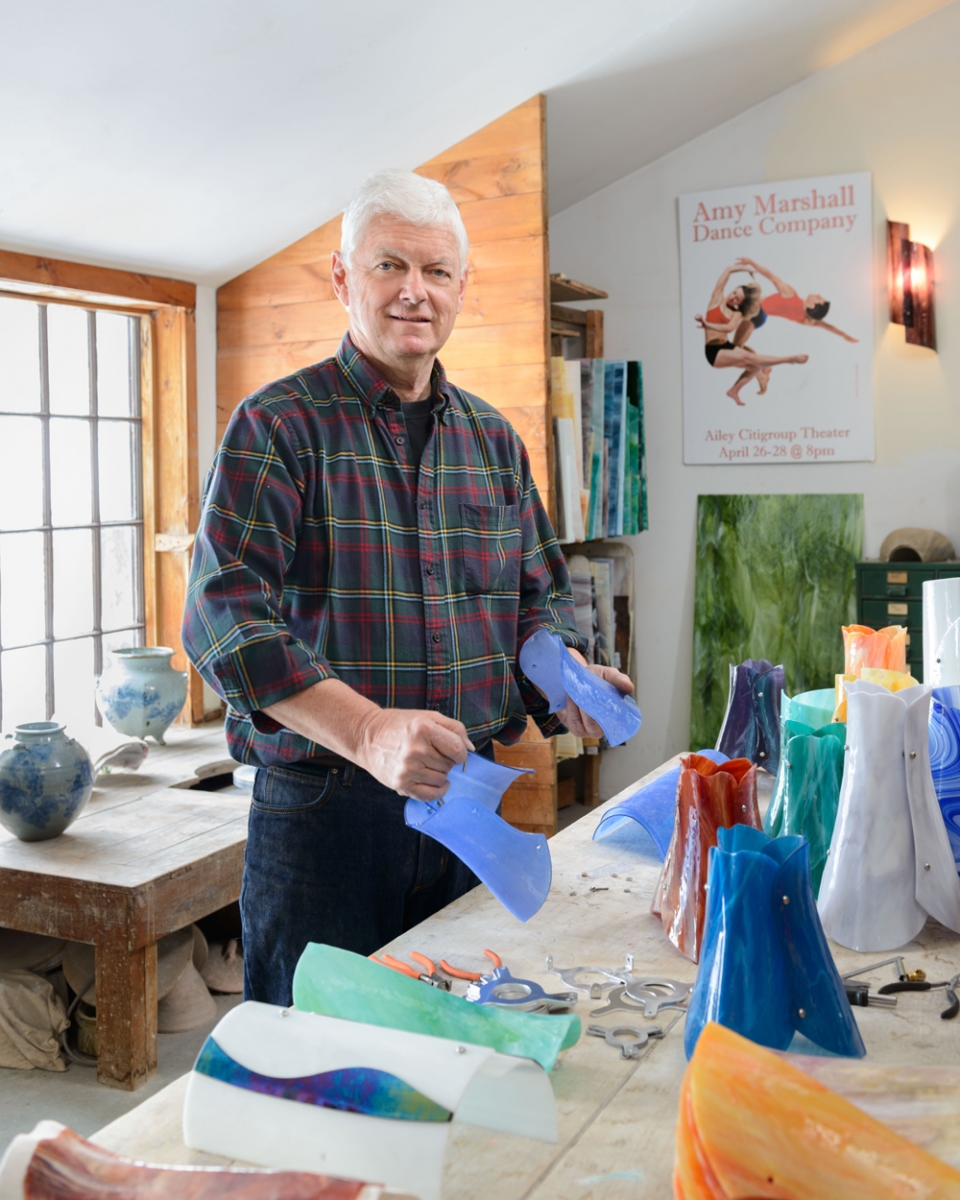 Classical music plays in the background as Derek Marshall assembles his award-winning glass lights in his
studio in Sandwich.

Lighting sets the tone for the space— whether you’re buying for the cruise ship Queen Victoria or your own little cabin in the woods. And one New Hampshire artist has delivered for both.

Derek Marshall sculpts and handcrafts affordable, elegant glass lighting in Sandwich and sells his work online. There’s no charge for shipping, and customers can order free glass samples to try out for color and light.

That a single craftsman could run such a comprehensive and productive business while also producing original, award-winning designs is impressive. But, then Derek and his wife, Linda, have always followed their own unique, disciplined and daring path.

The road to Derek’s Sandwich studio leads deep into old settled farmland and woods. On a dirt road, after going up a substantial hill, on the right is a rough barnlike structure with a low porch surrounded by gardens. Within moments, Derek and Linda emerge to welcome their visitor into their studio and home.

Derek’s glass studio is a tidy, highly functional space, and he is a thoughtful teacher. He provides patient explanations of the complex processes he has refined over years of manufacturing, and makes everything sound deceptively simple.

“Here’s a pattern for our Trillium pendant lights,” Derek says, referring to three, thick cardboard cutouts. “I take a piece of glass and cut it like so…” Like a skater executing a figure eight, Derek incises the glass, creating inside and outside edges. Gently, he cracks the pieces apart.

“This is an old potter’s wheel that I transformed into a diamond grinder,” he says as he demonstrates how he smooths glass edges. Ceramic molds for various designs line nearby shelves. These curved, sculpted forms do not immediately suggest sconces and pendant lamps.

“When I do a firing,” Derek says, “the glass sheets are laid on top of the mold in the kiln. With heat, the glass slumps over the mold, creating the shape.”

The electric kiln, which is temperature controlled by a small computer, can fire up to seventeen or eighteen pieces at a time. Each mold has its own firing temperature. If the kiln heats too fast, the glass cracks. If it heats too slowly, it’s costly. If the temperature is too high, the glass liquefies and runs off the mold.

Once the glass has cooled, Derek assembles lighting fixtures by attaching hardware according to precisely calculated measurements. Springs connect the molded glass pieces with a bit of flexibility and an adjustable metal “spider” holds each electrical fixture in place. These lighting fixtures can be fitted to a variety of mounts to create chandeliers, pendants or sconces. The names are fun: Andromeda, Wave, and Juneau chandeliers; Mini Sushi and Django pendants to mention just a few. Derek has refined his techniques to the point where he can turn around an order in two days.

Derek also designs and manufactures elegant ceramic sconces. As he describes these lamps, the larger history of his evolution as a craftsman begins to emerge. It began in Japan with pottery. 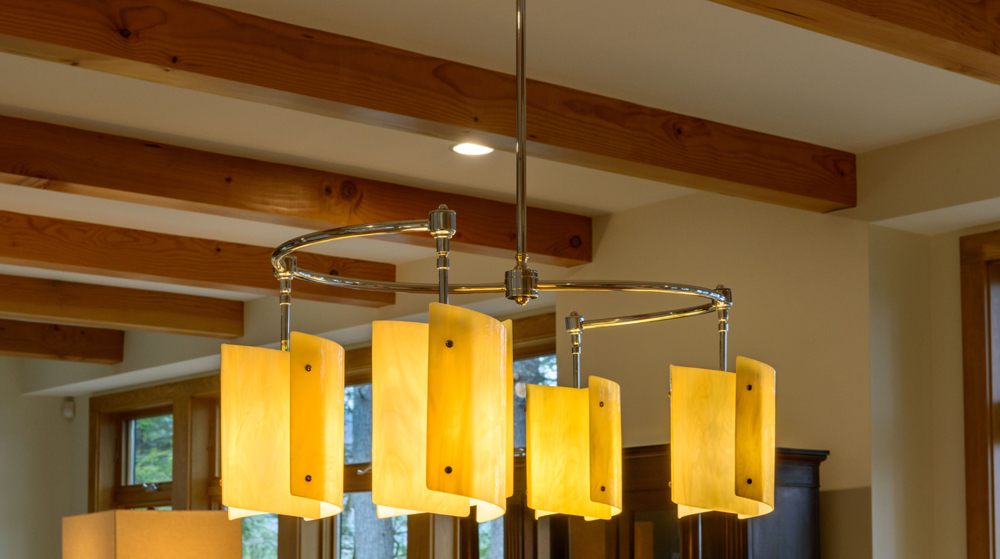 While he was in the navy in the mid-1960s, Derek and Linda were stationed in Japan. Linda learned to speak Japanese, and they were able to travel a bit. They made good friends, learned more about the culture and soon fell in love with Japan’s pottery tradition, a revered craft. Soon, they were making pottery themselves. Derek made the pots, and Linda did all the decorative painting. They returned to Kyoto in 1970. Marshall studied pottery at Kyoto City University of Fine Arts, and Linda studied painting with noted artist Tomikichiro Tokuriki while caring for their baby daughter Amy. They began to look for a teacher.

“We visited several potters. Then we met this potter who lived with his wife in an old Zen temple,” Derek says. “He had long white hair, and his wife would run the potter’s wheel for him by pulling on a rope loop. He told us that he couldn’t take on an apprentice. He was in his eighties and didn’t have much time left. But, he could introduce us to someone.

“So we took a long walk through these mountain paths, which are now probably highways, and went to visit the well-known potter Matajiro Kawamura. He was in his forties, and lived with his wife and two children in a wonderful home in the mountains that included a teahouse,” Derek says. “Close by were his two enormous, five-chambered, wood-fired kilns. He thought about it and agreed to teach me his craft if we would teach him English.” 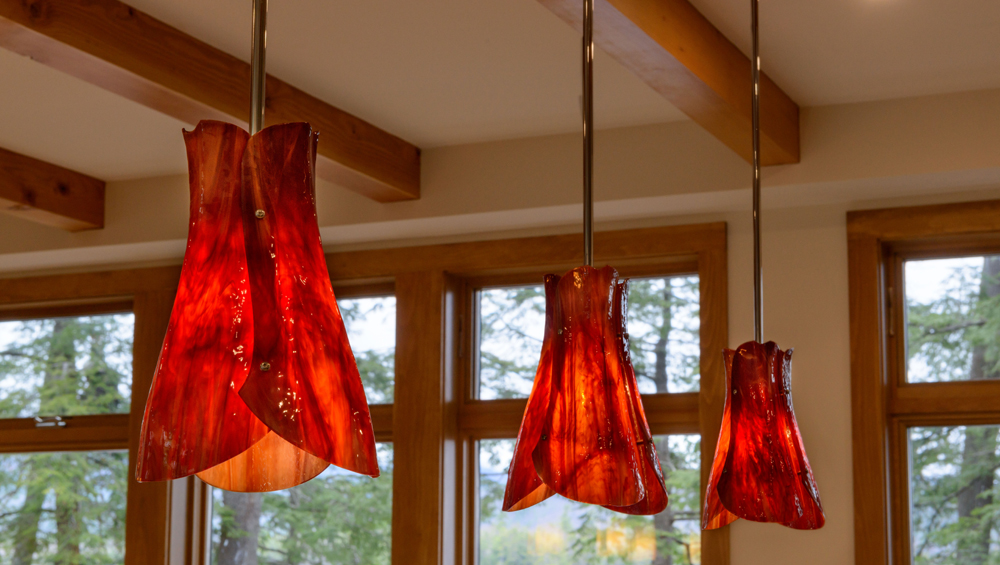 And so Derek’s apprenticeship began. It took four men several days to load a kiln, three or four days to fire it, and then over a week to cool it down. To appease the gods before lighting the initial fire, Kawamura’s wife would make a shallow hole by the mouth of the kiln, crack an egg in the hole and cover it. Then she’d place two bowls, one filled with salt, the other with sake, on top of the kiln. “Those rituals were fun,” Derek says. “We also baked sweet potatoes in the fire-mouth of the redhot kiln.

“Mr. Kawamura made a lot of tea ceremony ware that he sold at shows,” Derek says. “The colors were shibui, very restrained, nothing flashy about them.”

When the Marshalls moved back to the United States in 1971, they soon bought an old farm in Sandwich. “We wanted to live in the country,” Derek says. “And Sandwich was a crafts community. There was the League of New Hampshire Craftsmen’s shop, and many other craftsmen lived and worked in the town.” The evolution from clay to glass was gradual for Derek. He progressed from ceramic sconces to glass sconces and then to more glass lighting—all the while accruing significant numerous Awards for Design Excellence (ADEX) from Design Journal and being named as one of the top 100 lighting manufacturers by Residential Lighting magazine.

Be it glass or clay, the signature of all Derek’s work is his complete dedication to craftsmanship. 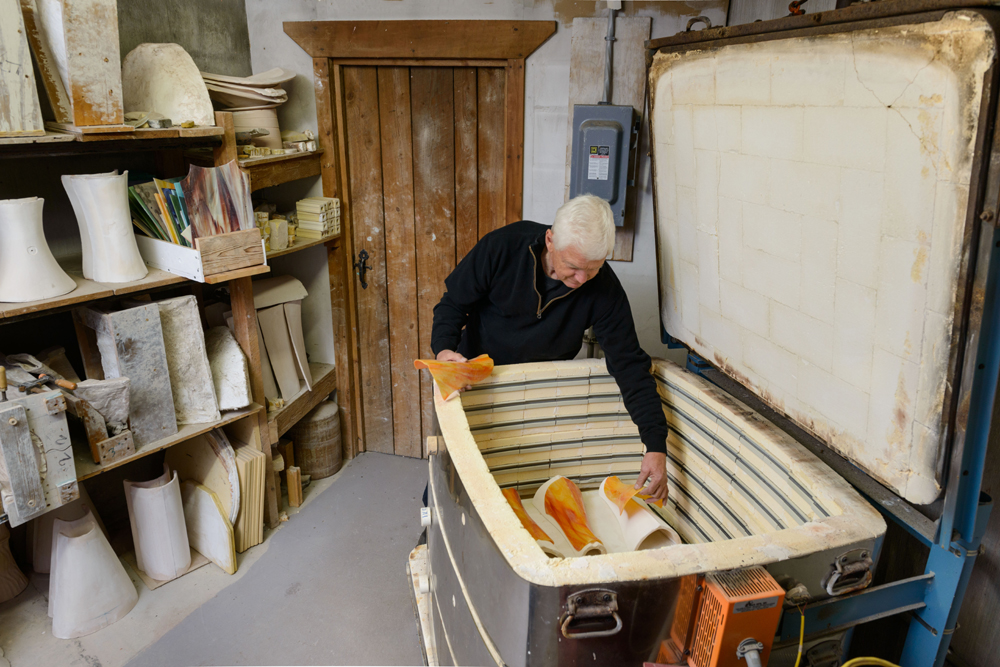 Porcelain molds line shelves in Derek Marshall’s kiln room. Here he carefully removes glass pieces that have been fired and shaped by molds in the kiln.