Living Large On A Small Footprint 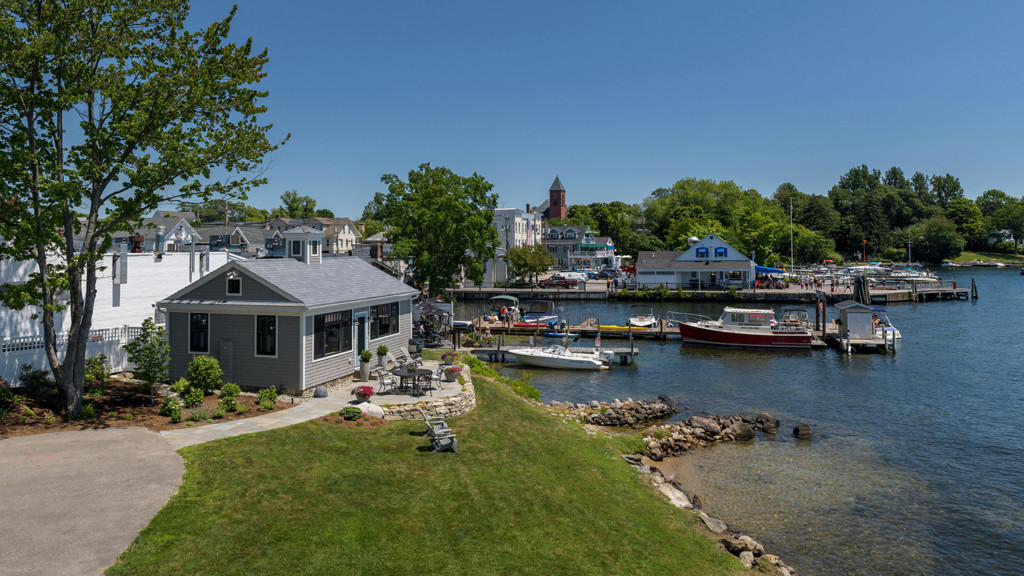 The cottage’s lakeside location is both lovely and practical downtown Wolfeboro is only a few steps away.

On the shores of Lake Winnipesaukee, tucked behind the iconic Yum Yum Shop bakery on Main Street in Wolfeboro, stands a small, gray cottage, noticeable only from the water. The cottage once belonged to its more spectacular neighbor, a green Victorian house on the lake that is familiar to Wolfeboro residents and visitors alike. The Victorian now houses condominiums, and the cottage is home to local realtors Ronn Bronzetti and Sara Reineman, who moved there about two years ago.

Reineman discovered the neglected cottage one weekend on a visit from Boston, where she and Bronzetti lived. They used to visit the area regularly because he is on the board of Brewster Academy, a boarding school in Wolfeboro (he is a 1992 graduate). While Bronzetti was in meetings, Reineman, who was getting into the real estate profession at the time, would look at properties. “It wasn’t serious looking,” she says. Then she found the cottage. “This was a unique property.” In fact, the little lakeside cottage and accompanying Victorian (they were sold as a package) were too intriguing to pass up. 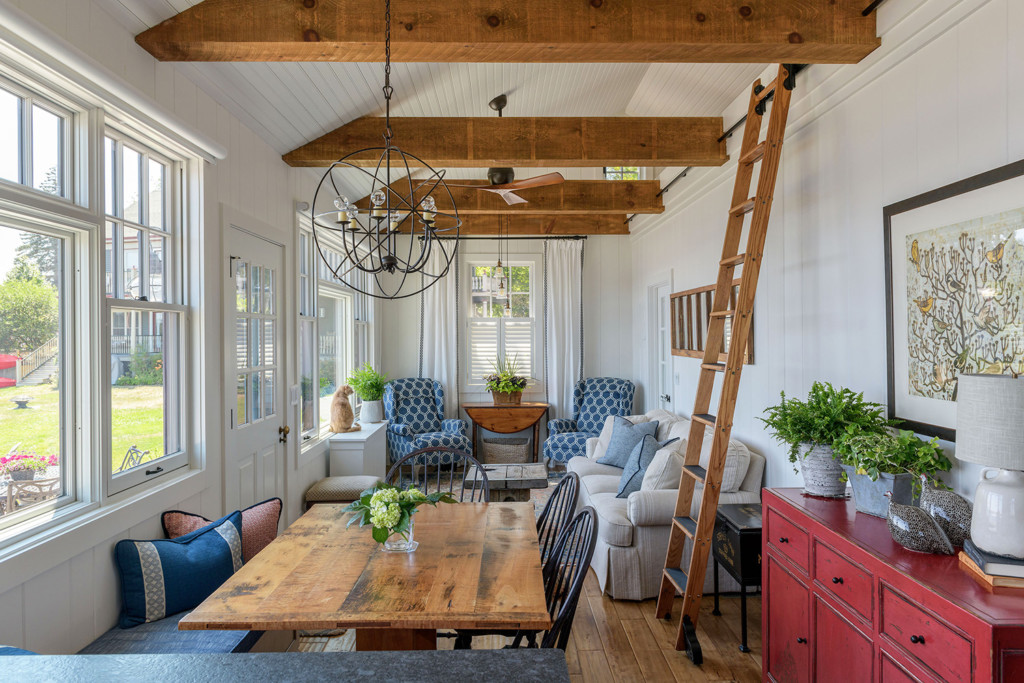 The cottage may be small (facing page), but the views are big, as evidenced by the bright and airy kitchen that looks onto the lake.

After working out a deal for both properties with a partner in April 2016, the couple began spending time in the cottage, which they envisioned as a summer home, a counterpart to their apartment in Boston’s Beacon Hill.  They had moved there about three years earlier, downsizing from a larger house in Wellesley, Massachusetts.

“That first summer we just wanted to live in the space to see how we liked it,” says Reineman. But they discovered they never wanted to leave. “We fell in love with the Wolfeboro area and decided to make it home,” Bronzetti says. So they moved, along with their cat and two Yorkshire terriers.

By then, Reineman was already a realtor in Boston, so Bronzetti got his realtor’s license as well and together they formed the Lake Winni Team, part of Berkshire Hathaway HomeServices Verani Realty. They joined an office on Main Street in Wolfeboro, just a short walk from their home.

Meanwhile, the three-season cottage was in very poor condition. Initially, the couple spruced it up with paint, but it needed a major overhaul. “It wasn’t really livable,” Bronzetti says. “In fact, it was a wreck.” So they decided to embark on a major renovation, with help from a team that included Tracy Leach and Linda Diorio, of T and L Interiors in Wolfeboro; Dan Patch, of Dan Patch Construction in Gilmanton; and Bobby Meehan, of Shamrock Landscaping in Mirror Lake.

The first step was to lift the structure so they could pour a concrete foundation with a four-foot crawlspace underneath. The dropped ceiling was removed to reveal a fourteen-foot ceiling with beams. That high ceiling helped realize one of the couple’s main goals for the house—that it be light and airy. “We wanted something a bit brighter than a traditional lake house,” Bronzetti says. “And I wanted clean, white walls, because the house is so small,” Reineman says.

Leach and Diorio worked with the couple to design the layout, which consists of two bedrooms and a bathroom, and a combined living room/kitchen/dining area that faces the water.  “This was a fun project for us to work on,” says Diorio. New Pella windows were added, including the two large windows in the main living area that face the lake. Windows facing the Yum Yum Shop were placed high up, for privacy. 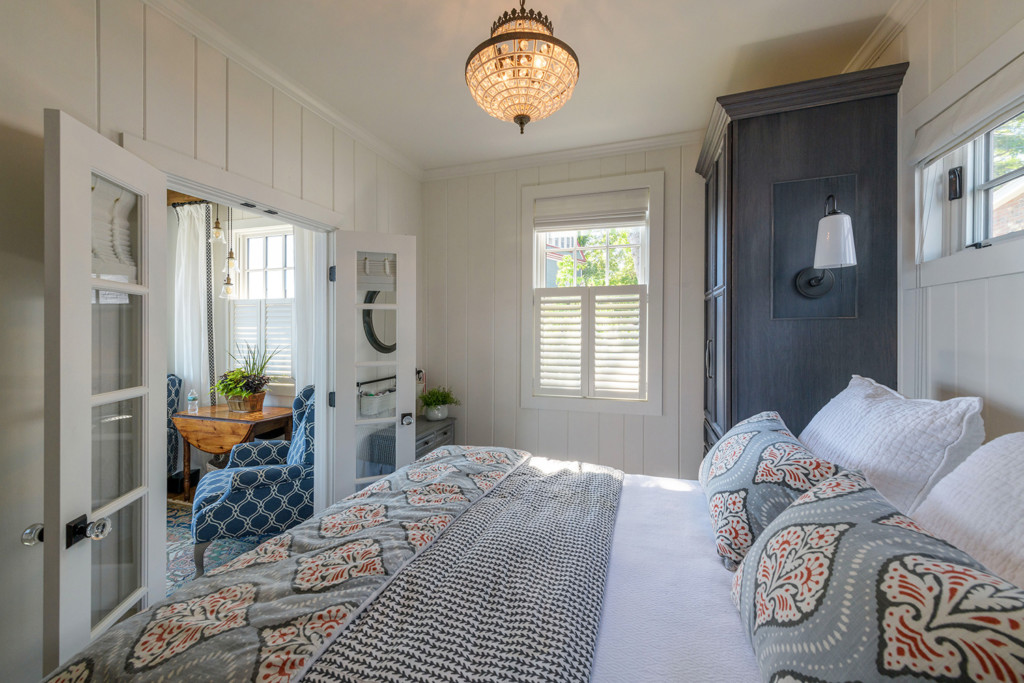 The master bedroom connects to the main living area through French doors.

According to Leach and Diorio, the overall design was in large part dictated by the house’s size (a bit less than eight hundred square feet). “When you’re designing for such a small space,” Leach says, “you have to maximize every square inch.” Accordingly, the banquette that provides seating for the dining room table contains drawers for storage. The bedroom TV is mounted on the wall, and another in the living room is actually embedded in a cabinet so it doesn’t block a window until someone wants to watch television—when it rises up at the touch of a button. Master carpenter Bryan Stanley of Wolfeboro and Greg Brooks, of Greg Brooks Electric in New Durham, created this extremely clever and practical TV stand with hydraulic lift.

Leach and Diorio worked with the couple to develop an overall palette for the home, choosing neutral beiges and whites with a bit of blue that would harmonize with the outdoor landscape. “You’ve got the blues of the lake and the skies, and we didn’t want to compete with that too much,” Diorio says.  The house has wood floors throughout that are from Provenza Floors’ Antico Collection (Provenza is based in Tustin, California). The walls are covered in white pine paneling, and the ceiling is made of white bead board. The light fixtures, such as the “atom” shaped chandelier over the dining table, were chosen to provide contrast as well as light. The light fixture and ceiling fan are from Patti Bros Lighting & Furniture, in Wellesley, Massachusetts.

Fabrics were selected, for the most part, with an eye toward the practicalities of lake house living. The banquette fabric, for example, is designed to bead off liquids. “We were looking for something casual but also updated,” Reineman says. “Tracy and Linda were wonderful partners, and did a great job of making our home feel and look like us.”

In the living room, the lake is the focus.  “We wake up every day and the view outside is different,” Reineman says. “In spring we see fishermen. In summer, motorboats. And in winter, people ice fishing. It’s like having our own TV to the outside world.” A comfortable couch covered in beige linen and two blue easy chairs are the main furniture in the living room. As a touch of architectural whimsy, there is also a wooden ladder leading to a storage space.

The adjoining kitchen features an island with a granite top, a farmhouse sink and a number of cabinets finished in a sand color. The cabinet design, a collaboration between T and L Interiors and Fred E. Varney Company in Wolfeboro, is especially important in the small space, and Reineman describes the set up as “very easy, very livable.”  The dining area features a wooden table that was custom made for the couple by Lou Farkas, of Meredith Bay Furniture Company in Meredith. 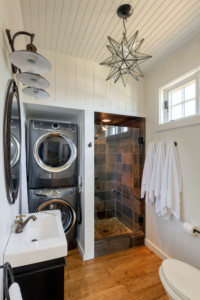 A washer and dryer are conveniently placed in the bathroom.

The master bedroom connects to the living area with French doors. The bed is tucked between two tall wardrobes selected by T and L Interiors. “They are easier to organize than any closets we’ve ever had,” says Reineman. “I love them.” There is also a guest room with twin beds that is a cozy nook for visitors.

The bathroom functions as a multi-purpose area. In addition to its tiled shower, it has a washer and dryer. Finding a vanity that would fit in the available space was almost impossible,  Reineman says. “We had to find one that was a certain size, yet functional.”

For architectural interest, T and L Interiors added a cupola with a light in it to the top of the cottage. They also selected a slate roof from DaVinci Roofscapes in Lenexa, Kansas. The front doorknob is by E.R. Butler & Co. of Boston. Bronzetti and Reineman hired Shamrock Landscaping to landscape the grounds. The old wooden deck was replaced with a new and larger bluestone patio by Scott Blundo, of Rustic Stone and Garden in Moultonborough. Reineman particularly likes the patio because it helps give the cottage the look and feel of a full-size home, and also expands the livable space in pleasant weather. The couple share a dock with their neighbor and own a small boat. “Being out on the water adds a whole new dimension to our lives,” Bronzetti says.

Before moving into the cottage, neither Reineman nor Bronzetti could imagine being so happy in such a small home. But now that they are living the small house life, they have become fans. “It’s allowed us to simplify,” Reineman says. “We think about everything we bring into the house, and that’s a really good way to live. I’ve enjoyed that part of it. It makes life easier.” Bronzetti adds, “It’s surprisingly comfortable, partly because there are so many windows looking onto the bay. It’s all about the views.” Both he and Reineman enjoy living in town and being close to work. “This was the best thing we ever did,” he says. “We love the home, but more important, we love this community.”

More images from this home