Living the good life in Hancock

A remarkable lifestyle and extraordinary gardens are the fruits of the Elliotts’ simple existence. 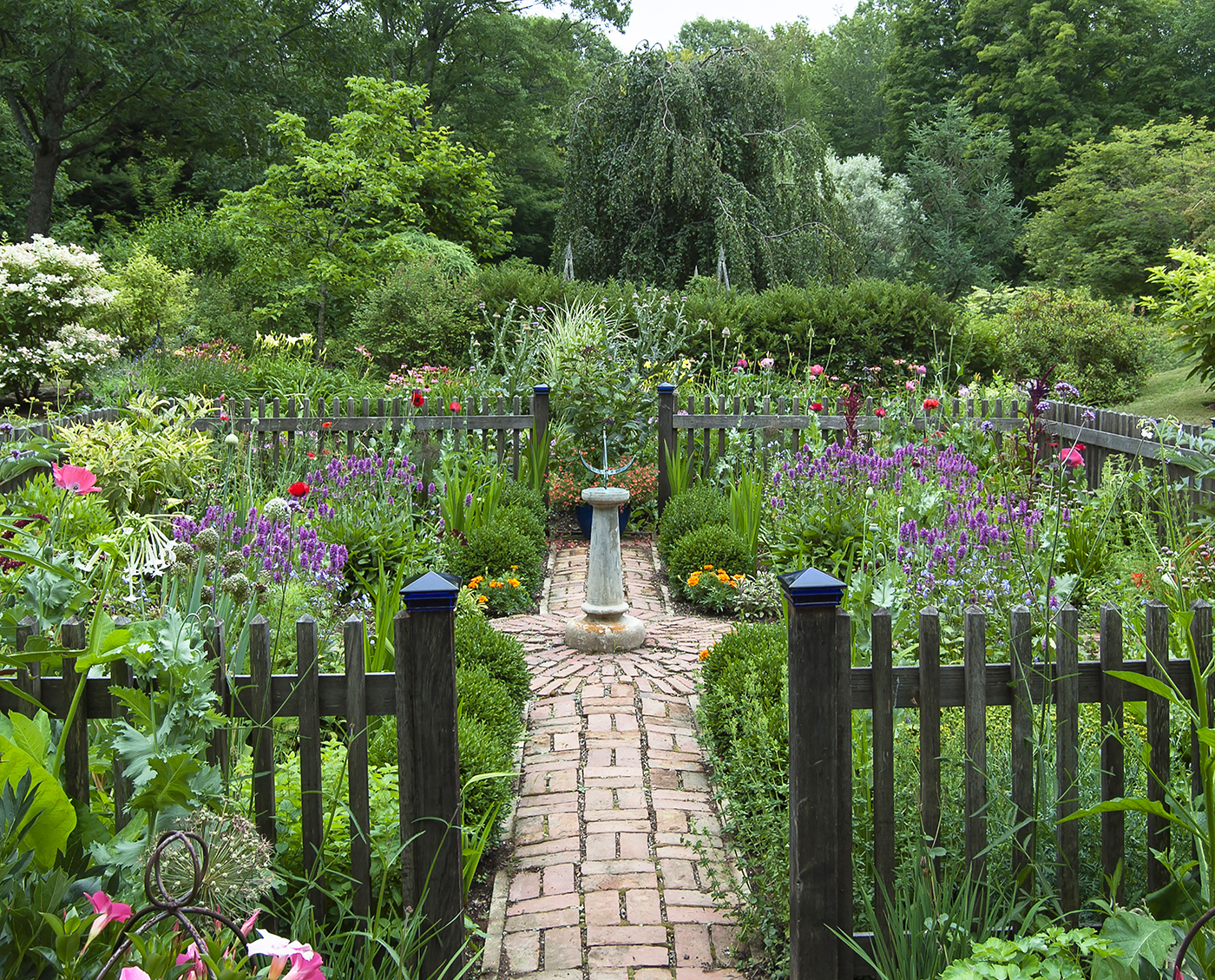 The classic four-square, fenced-in herb garden with an armillary sundial is one of the first gardens the Elliotts created on their property. Within the boxwood-lined beds are purple-flowering stachys, oregano, thyme, variegated symphytum, poppies, alliums, marigolds, nasturtiums, tall white nicotiana and more.

Bill and Eileen Elliott bought twenty-five acres of wooded land at the end of a dirt road in Hancock, and have spent the past thirty-five years creating a home and lifestyle that is all about making the best use of their property and the resources it has to offer.

Inspired by Helen and Scott Nearing—who wrote the book Living the Good Life, a bible for the back-to-the-land movement of the 1970s—the Elliotts were up to the challenges they faced. Their property was on an unmaintained road, two miles from the nearest electric pole. This made the land very affordable but also meant Bill and Eileen would have to live off the grid. They didn’t have a mortgage, making improvements as they could afford them. One of the principles learned from the Nearings was “pay as you go.”

Bill was a math teacher at Hawthorne College and later at Keene State College. “We had no building skills,” Bill says, “so we went to the Shelter Institute in Maine to learn how to build a house.” The couple started clearing the land by hand, pulling the stumps with a come-along. The only heavy equipment used was a backhoe to dig the cellar hole and shallow well. Bill and Eileen lived in a house down the road for the three years it took them to clear the land and build an oak post-and-beam Cape, using wood from the property. “When we moved into the house, we described it as a wooden tent,” Bill says. 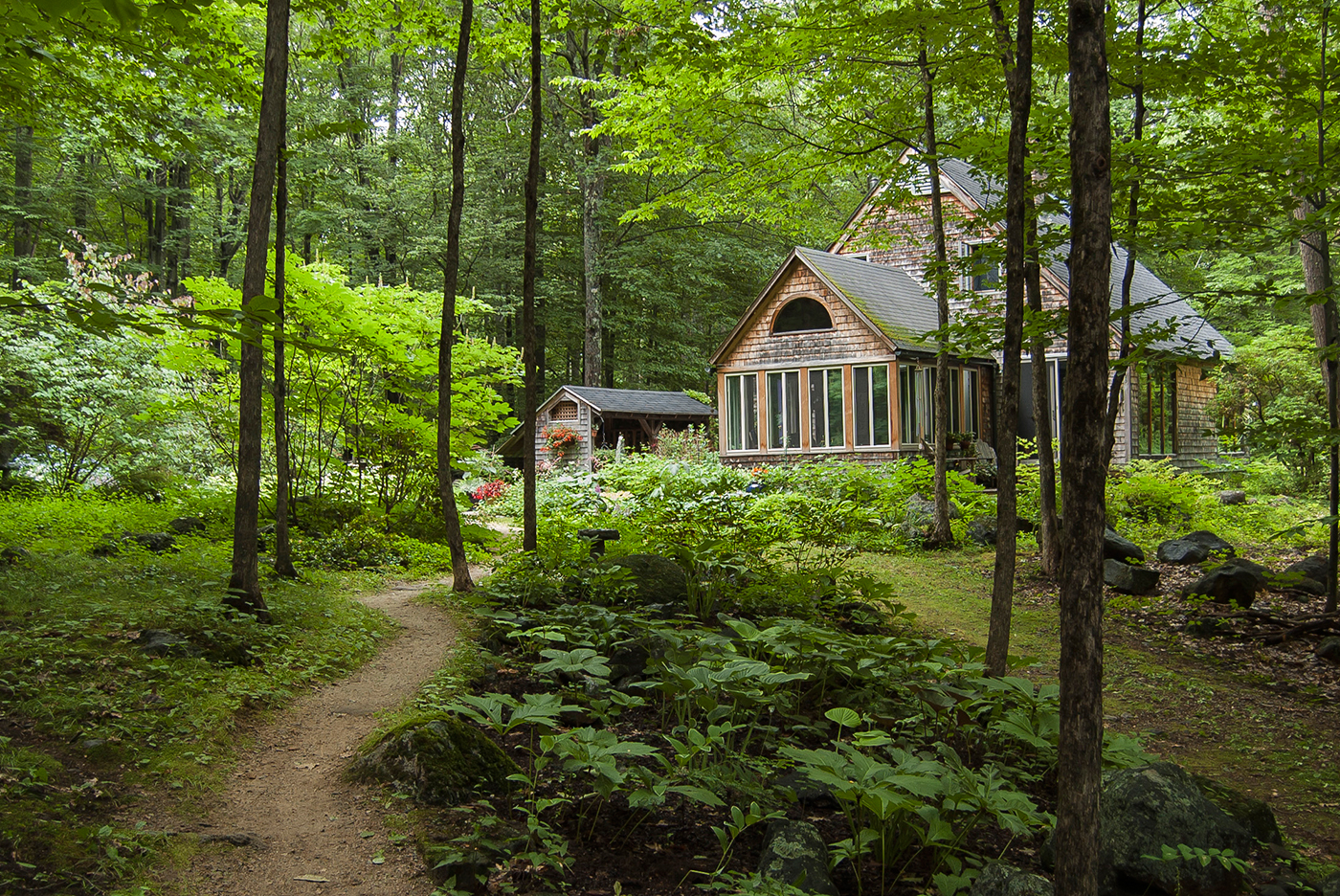 A well-worn footpath winds from the garden through the trees to the small clearing where the house is nestled. The Elliotts choose not to increase their solar gain by cutting the large oaks around the house, instead enjoying the shade and natural air-conditioning the trees provide in summer.

Bill and Eileen gradually finished the house over the next ten years as time and money allowed. The house is located about three hundred yards from the road, since it was important to be close to a reliable source of water. The steep roof collects rainwater, which is directed into a cistern to be used for laundry, bathing and watering plants. Bill uses a hand pump in the cellar to pump the rest of their day’s water into tanks upstairs that feed the sinks. “We pay close attention to water use since the well has gone dry before,” he explains. “We use about twenty gallons a day.” Hot water is heated and rises naturally through pipes next to the large wood-burning Waterford cook stove, which also heats the house in the winter. “Bill loves to do firewood,” Eileen says proudly, pointing to the neatly stacked piles of split cordwood in the woodshed.

In the summer, Bill and Eileen use a propane camp stove for some cooking, but still run the woodstove for a few hours each day to heat the hot water and do most of the cooking.

The cellar is their refrigerator, maintaining a cool 60 degrees in the summer and 40 degrees in the winter. Here, Bill and Eileen store all the food they’ve grown and preserved. Glistening jars of tomatoes, pickles, relishes, blueberries and dilly beans line the shelves, along with boxes and bins of apples, potatoes, carrots, winter squashes, onions and garlic. Bill and Eileen buy dried beans, flour, oats and other staples in bulk. Both are vegetarians, and they estimate that they grow about half the food they eat. 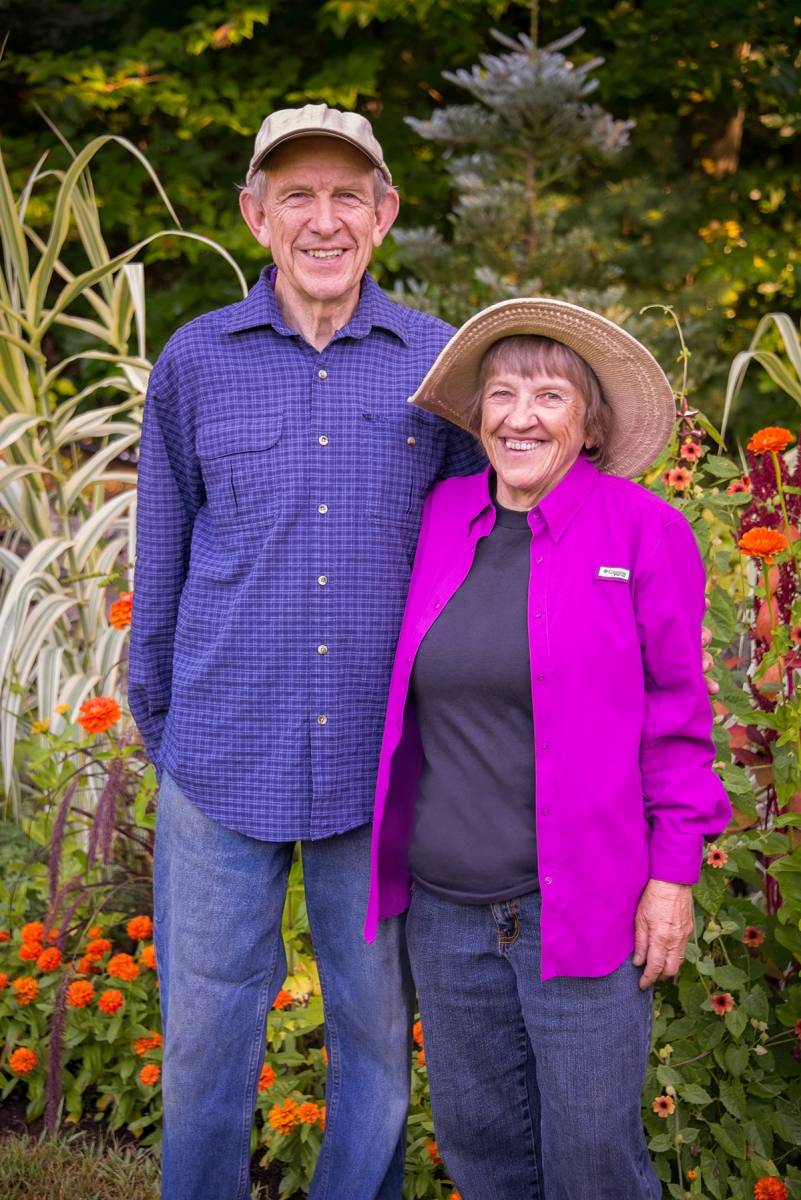 It is too shady around the house for photovoltaics to be very effective year-round. However, Bill and Eileen have four 50-watt solar panels on the roof that can generate 200 watts of power in a few hours on a sunny day. Batteries located in the cellar store the power that is used to run a dozen low-voltage lights, a radio, CD and DVD players, and a laptop. “We live off the grid but still use plenty of resources,” Eileen says. “We have a car and a chainsaw, and we travel. This year we went to a Celtic music festival in Scotland, and traveled to Newfoundland and Cape Breton.”

As visitors slip through the Elliotts’ Gothic arch gate made of twigs to enter the lush and lovely garden full of ornamental trees, flowering shrubs, perennials, edible fruits and vegetables, it is hard to believe that this area was once totally wooded.

During the growing season, the Elliotts work in their garden about five hours a day. After battling with deer for years, they finally fenced off two acres of their gardens; water for the vegetable garden is pumped from an open water hole to a three-hundred-gallon tank above the garden using a gas-powered pump.

It is evident from the scope of the landscaping that the Elliotts are plant collectors. For years, Eileen worked for Our Town Landscaping in Hancock, and she brought home many ideas—and plants. “We had no real garden plan, so I spent many sleepless nights wondering where I could put the things I just had to have,” she says.

“We cut more and more trees, and made the gardens bigger and bigger,” Bill says. “But every time we go to plant something, we find rocks!”

Their original garden was at the top of the hill, and it has grown out from there. Now that space is devoted mainly to vegetables. The spring garden starts with sorrel, rhubarb, asparagus, early spinach and lettuce.

In summer, there are peppers, tomatoes, cabbages, squash, carrots and chard along with a multitude of herbs. Eileen recommends ‘Rattlesnake’ heirloom pole beans. “Even though they get quite large, they remain sweet and tasty,” she says. Lemon cucumbers are her grandson’s favorite. The Elliotts triple-fence their corn against marauding raccoons and skunks.

Ornamentals are mixed in with the vegetables; there are day lilies and dahlias along the paths, and self-seeded poppies, chives and red-leaved amaranths are allowed to grow.

In fall, there are potatoes to dig, garlic to plant and winter squashes to harvest. Bill and Eileen have several large cold frames that can be placed right over some of the raised beds to extend the growing season, and the couple has recently finished building a garden shed at the top of the hill for tools. “It was thirty years in the making!” Eileen says.

Feast for the eyes, too

Edibles appear alongside the perennials and shrubs in the rest of the garden as well. Many fruit trees, high-bush blueberries and a fence covered with Concord grapes provide fruit for the larder. Winding pathways lead past a well-positioned bench looking down on the formal garden below. Eileen points to a larch draping over the front of the fence. “We got that idea from Rocky Dale Gardens in Vermont (one of the many places where they buy plants) so we call this ‘Mocky Dale,’” she laughs. 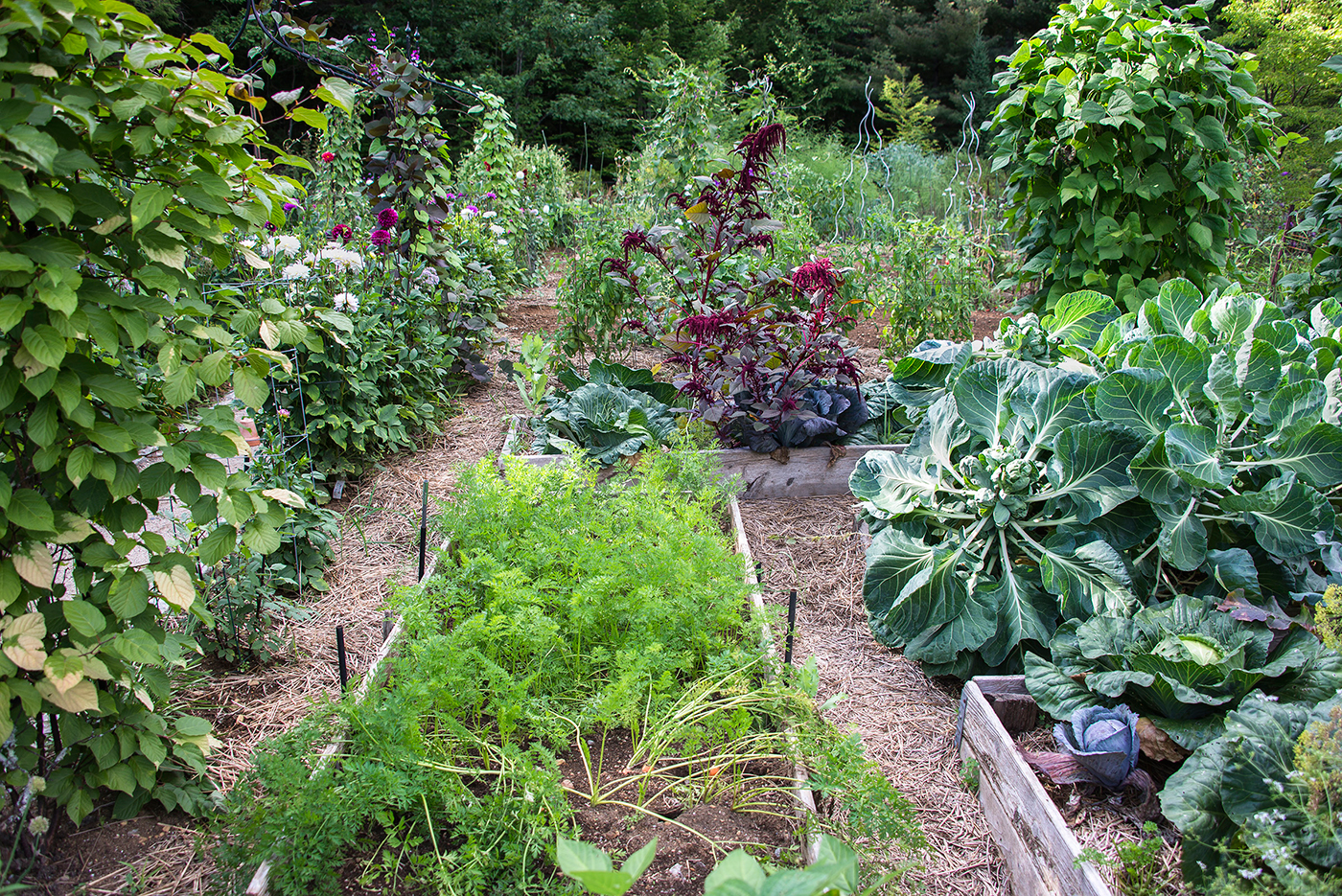 The Elliotts’ vegetable garden has many raised beds. Brassicas—including Brussels sprouts, and red and green cabbage—grow in the bed on the right. Carrots grow in the center bed and a variegated kiwi vine climbs a trellis at left.

Eileen has a collection of more than twenty magnolias that start to bloom in late April. The Elliotts also have lots of heathers, enough day lilies that they used to sell them at the local farmers’ market, and eighty-plus dahlias that the couple digs up and stores each winter. Eileen calls her collection of twenty Itoh peonies her latest obsession. The Elliotts have created a new area of shrubs, including four varieties of physocarpus, a larch and an umbrella pine. 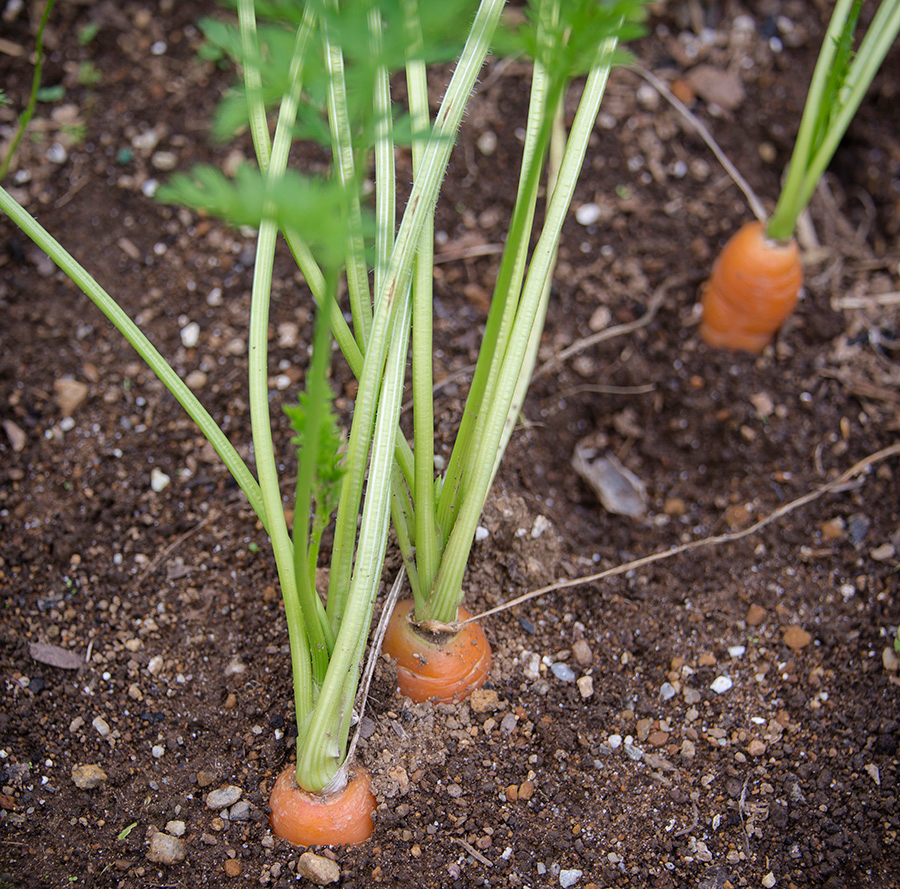 Carrots and other root crops are good keepers, lasting most of the winter in the Elliotts’ cold cellar.

Trees are one of Bill and Eileen’s passions, and the couple recently added a new gingko, a dawn redwood, Kentucky coffee tree, tupelo and whitebeam (Sorbus aria) that they saw in Scotland. “We cut three free trees and replaced them with one $100 tree,” Bill joked.

Many of the trees tell a story. A weeping crab apple was planted twenty-seven years ago on their twenty-fifth wedding anniversary, and Bill and Eileen have planted trees for each of their six grand-children. “We are still planting trees,” Eileen says.

A few years ago, a house was built at the end of their road and electricity was brought in. “Our friends all thought we would finally hook up to it, but we see no reason to. We enjoy our life as it is,” Bill says. They planted a camperdown elm and six new magnolias to screen out the sight of the new wires.

The Elliotts’ driveway was once an old logging road. “We can drive to the house if necessary, but rarely do,” Bill says. “We prefer to walk through the gardens and woods, using a wheelbarrow or sled to carry stuff in and out.”

In the winter, they snowshoe out to their car, which is parked near the road. Their driveway has never been plowed. “It is seasonal living, so every couple of weeks it is different,” Eileen says. “We wake up to sunrise over Crotched Mountain. It is not just a good life but also a great life. It shows what two, kind of obsessive people can do on their own.” 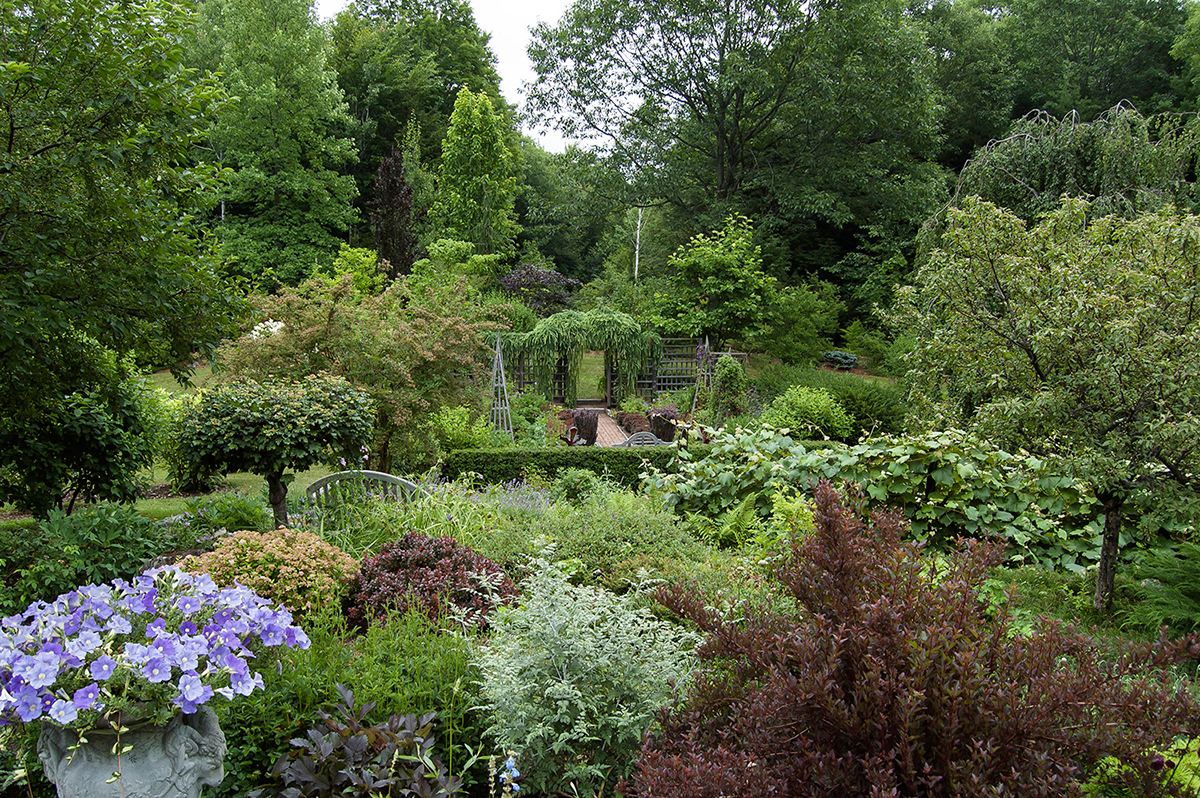 A colorful mix of shrubs and small trees, which look great in any season, flows down the hillside toward a well-placed, weathered bench overlooking the “Mocky Dale” garden. The larch growing over the entry fence is an idea borrowed from Rocky Dale Gardens in Vermont, a favorite plant source for the Elliotts. Concord grapes on right provide plenty of fruit for jelly and juice.
Categories: Gardening & Landscape