Making downsizing from a house to a condo easy

Downsizing was easier than a Seacoast homeowner had imagined, thanks to finding the perfect new home and working with professionals who made her transition trouble-free. 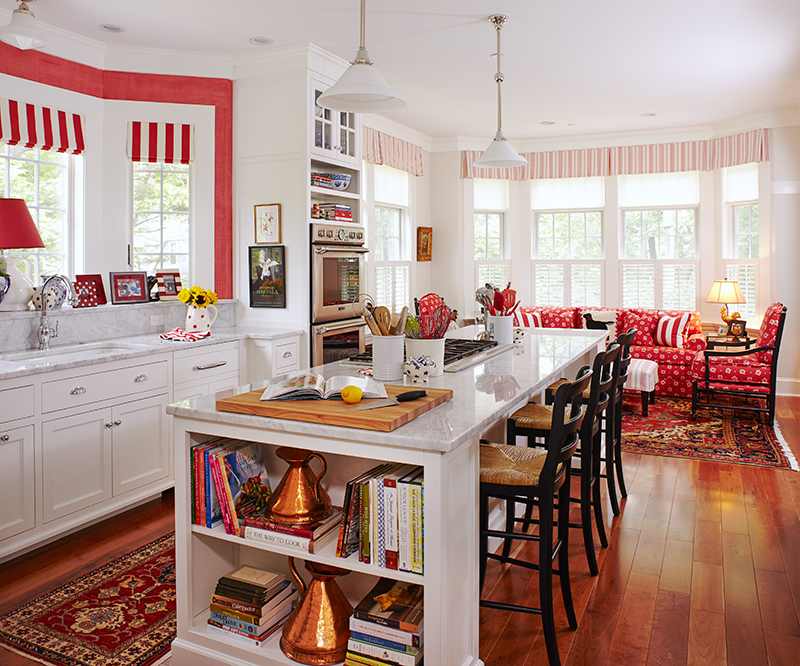 Architect Lisa DeStefano of DeStefano Architects in Portsmouth designed Leslie Ware’s kitchen with lots of counter space, light and views of the garden. Ware, who works as a food stylist, also loves to entertain. In the kitchen, she wanted an accent of Nantucket red, a color interior designer Anne Cowenhoven of Accent & Design in York, Maine, describes as “a warm, crisp red with just a hint of pinkness.” Judy Dibble of Brookwood Designs in Hopkinton glazed the kitchen walls.

When it comes to comfort, homes are a lot like clothes—the ones that fit the best, feel the best. There are times in life when an apartment can feel like a palace; other times a large house with all the amenities is heavenly. But when new circumstances arise and a home no longer fits, it’s time for a change.

This is where Leslie Ware found herself in 2011, after being married to her husband, Jesse, for thirty-three years. In 1994, they moved to the one-hundred-year-old Seabury Farm in York, Maine. It was the perfect home in many ways: it had land and a spectacular riverfront setting; it had room for the family to grow and gather; and it had a shed for building wooden boats (one of Jesse’s passions). “It was a place where everyone wanted to come,” says Leslie. “We had baby showers, a wedding, birthdays, celebrations of life, Christmases and Easter egg hunts. Every Thanksgiving, we pressed cider.”

But when Jesse—the founder of Real Log Homes and Timberpeg, both in Claremont—died, “the heart of the farm was no longer there,” Leslie says. “Your heart knows when it is time to leave with all your wonderful memories.”

Leslie, who is an active member of her community, wanted to stay in York. She does a lot of work with the Breast Cancer Living Well Fund, an organization she co-founded that helps women through the journey of their treatment. She is a food stylist for Mary Ann Esposito, the host and creator of the PBS series Ciao Italia (you’ll frequently see Leslie’s work accompanying Esposito’s “Home Cooking” stories in New Hampshire Home). And Leslie has a son, grandchildren, nieces and nephews, and lots of other family members and friends nearby who adore spending time with her.

So one day, about a year and a half after Jessie died, Leslie decided not to take her usual route from Seabury Farm when she walked her dog Barnacle. Instead, she headed in the other direction, into York. Just past the village, she saw two new buildings, each with two townhouses, going up where an abandoned nursing home had been. She liked what she saw, and a few days later, she made an offer and became the first buyer of one of those townhouses.

The new buildings were being built on the site of the former York Harbor Home for the elderly. “It was a derelict building at the entrance of a well-established neighborhood with some really nice turn-of-the-century homes,” says Matt Banow of Matt Banow Design in Rollinsford, which provided architectural design services for the developer, Kevin Erikson of Tide Run Development in York. “I referenced the Shingle Style of the neighborhood for the design of the townhouses’ dormers, roof forms and building massing.”

Erikson also hired Brian Sleeper of Period Design Restoration, a custom homebuilder and general contractor in York Beach. On the day that Leslie and her dog walked by, construction was well under way and the framing of rooms had begun. Because Leslie had very specific ideas in mind for her new house, she called Lisa DeStefano, principal of DeStefano Architects of Portsmouth, shortly after making the purchase. The two had known one another for years. “Lisa and I walked in to the condo and said, ‘Stop!’” Leslie remembers.

Banow says he was happy to give Leslie and DeStefano his drawings and cooperate in any way he could. “We wanted to give Leslie the opportunity to do her own thing,” Sleeper says. “This way, we could build the interior to suit her taste. And what great taste she has!”

With the construction drawings as her basis, DeStefano gave Leslie her typical “client homework assignment”—a checklist to “let us know what the clients’ wishes are; what they like and what they don’t like; what the amenities of each room are; and what the adjacencies of rooms are,” DeStefano explains.

At their next meeting three weeks later, DeStefano was amazed by what she saw when she came to Leslie’s house. On the large dining room table were notebooks for each room in the new house. In each notebook were photos of each piece of furniture (including dimensions) that would go in that room; a full list of amenities for that room, such as a special cabinet for board games; a list of works of art, including their dimensions; fabric samples for reupholstering; ideas about specialty lighting; work surface heights; and needs for storage and open shelving. “Leslie is so organized and such a wonderful planner,” DeStefano says. “She has clearly set the bar higher than anyone I’ve ever worked with. She really helped shorten the amount of time it took us to do conceptual design and final construction drawings.” 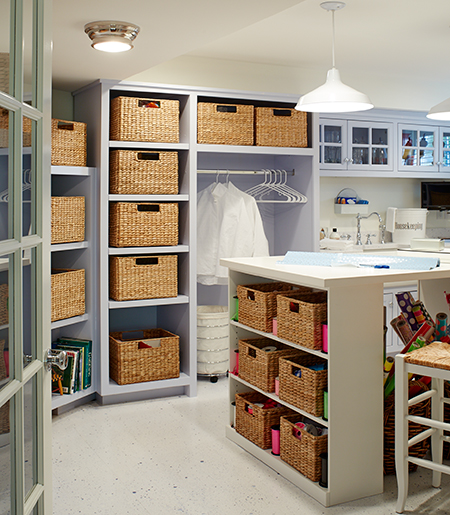 he laundry room doubles as a studio where Leslie Ware works on projects, such as creating centerpieces for her fundraisers and vignettes for her food styling. Judy Dibble of Brookwood Designs painted the floor with a pale blue base and darker blue splatters.

Designing to meet the homeowner’s needs

Leslie says DeStefano took her ideas and “worked magic.” For example, DeStefano turned the dining room on Banow’s original plan into a sitting area off the kitchen. The new dining area is now housed in the living room space. The laundry room on the original plan was off the kitchen; DeStefano turned that space into a wonderful butler’s pantry. “Leslie has lots of need for storage, both for entertaining and for her food styling business,” DeStefano says. “So we provided room to store her beautiful dishes and stemware, along with a wet bar, in the butler’s pantry and a storage pantry for other items across from the half bath down the hall.”

Although she misses having a big dining room, Leslie makes the new space work. Thanks to leaves for the dining room table, which normally seats six, she’s had as many as seventeen people seated for dinner. “We just make it happen,” she says.

Her kitchen is a cook’s heaven—it’s big with lots of counter space, and has three windows over the sink that bring light and views of the garden into the room. The kitchen, which DeStefano calls “the heart of Leslie’s home,” is open to the sitting area to one side as well as the dining and living rooms straight ahead. Cabinets on the wall between the living room and kitchen provide plenty of storage for dishes, stemware, cookbooks and more. There’s also lots of room to sit at the kitchen counter, where Leslie says, “I have four children lined up at Christmas making gingerbread houses, and we have a ball.”

On the lower level of the home, which opens to the backyard gardens, are a comfortable sitting area and two of Leslie’s other creative spaces. In the first, her home office, she manages her food styling business and the fundraisers she coordinates. One wall is adorned with photographs that are testimony to the importance of what Leslie calls “the five Fs in my life—family, friends, fundraising, food styling and preparation, and fun.”

The other room is the laundry room, which doubles as a studio where Leslie works on projects, such as creating centerpieces for her fundraisers and vignettes for her food styling. There is a four-by-six-foot work area in the center of the room; on two walls are floor-to-ceiling shelves holding organized bins of everything Leslie needs: linens, placemats, vases, serving dishes, ribbons, hot-glue guns and other tools. There are also bins for every holiday—Fourth of July, Christmas, Thanksgiving—and other occasions. They, too, are perfectly sorted.

DeStefano says this was a “very fast-track project—it took less than a year from the time we started to Leslie moving in.” Construction proceeded without a hitch, thanks to help from Leslie’s son J.P. Ware of Futuro Builders in Portsmouth, who functioned as her general contractor and implemented all the design work. “Because of J.P.’s involvement, there were very few questions,” DeStefano says. “All the stars were aligned, and the project went very smoothly.” 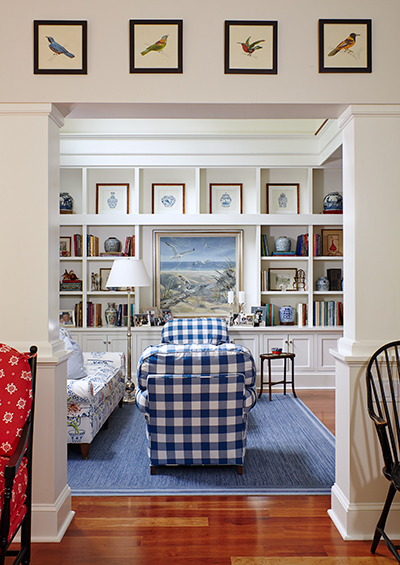 Homeowner Leslie Ware says the painting of the sea gull in the living room is that room’s focal point; the painting is from Nantucket and was one of her and her husband Jesse’s favorite pieces.  Interior designer Anne Cowenhoven used a blue-and-white check fabric from Pierre Frey on the two living room chairs.

Another reason the project progressed seamlessly is because of interior designer Anne Cowenhoven of Accent & Design in York, who helped Leslie with fabrics, wall coverings and paint colors. “Leslie’s choices were so cheery,” Cowenhoven says. “She knew what she wanted and had everything thought out.”

Cowenhoven remembers Leslie saying she wanted “a yummy Nantucket red—Jesse’s favorite color” for her kitchen as well as “Nantucket blues” in the dining and living rooms. To create this warm and crisp red for the kitchen, Cowenhoven called on one of her independent manufacturers in Philadelphia to custom print an existing pattern (red background with white turtles) on an upholstery fabric for the sofa and chairs. “They were so accommodating, and no one else in the world has this upholstery fabric,” Cowenhoven says.

“Leslie is so warm and so much fun to work with,” Cowenhoven continues. “All my workers loved going to her house because she always made them feel special and welcome.” DeStefano adds that the warmth in Leslie’s old home was felt by all her visitors and that, as architect, one of her goals was to carry that feeling to Leslie’s new home.

With that mission accomplished, Leslie says she’s grateful to the team that helped her create the home that tells the story of where she’s been. “I love my new home!” she says with a big smile.