Making the Most of a Spectacular View

With the help of creative architects and builder, one family capitalized on the selling points of a beautiful lot.

The family-sized, contemporary Hanover home was just a ten-minute drive from Dartmouth College. Even better, the house had breathtaking views of the Connecticut River valley and distant Green Mountain peaks. Unfortunately, the house had been built in three separate, disjointed sections. "The tall garage loomed over the house," recalls Pi Smith, principal at Smith & Vansant Architects in Norwich, Vermont. "And the entry was a dark hole, opening onto a blank wall." The building's midsection-the largest part-was the least attractive. "The ceiling was low and oppressive, with blackened beams that brought the apparent ceiling height even lower." Tiny windows throughout darkened the interior and hid that incredible view.

For the new homeowners-a family trading in their Tribeca loft in New York City for a New Hampshire lifestyle-the home's poor connection to its beautiful outdoor setting was the biggest drawback. The family had come away from New York with the desire to spend more time outside. How could the closed-in, cave-like house be transformed in a way that would take advantage of all that its setting had to offer? Rebuilding the entire five-thousand-square-foot structure was prohibitively expensive.

After much discussion, a radical solution emerged.

"The entire 'center bar' of the structure was demolished, down to the first floor deck," says Kevin O'Hara, president of O'Hara & Gercke, Inc., in White River Junction, Vermont, which performed the renovation. This approach spared the two bedroom zones at either end of the house, concentrating the new construction where it would have the biggest effect. 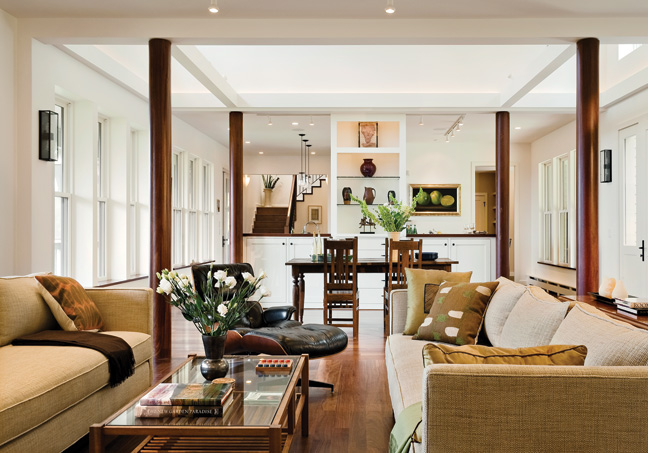 Coumarou posts help define the different functional spaces within the great room. A lit cabinet creates a display area for the dining room, while hiding the kitchen range hood behind it.

"In order to be strategic about the budget, we focused on the primary living spaces, giving them scale and drama," Smith says. Bedroom spaces received cosmetic renovations but were not rebuilt. And the basement was kept intact.

Yet demolishing part of a home can involve more risk than taking down a whole one. "One of the challenges was to protect the untouched parts of the house," O'Hara says. "With a major demolition project, weather can wreak havoc. In this case, it went very well." The builder chose a week when good weather was forecast, "and then we did as much framing as we could, as fast as we could."

The new vaulted portion of the home also helps to define the family dining space. "It's the classic greatroom design challenge," Smith says. "How to create distinct zones and functions in a space that, by definition, has no interior walls?" 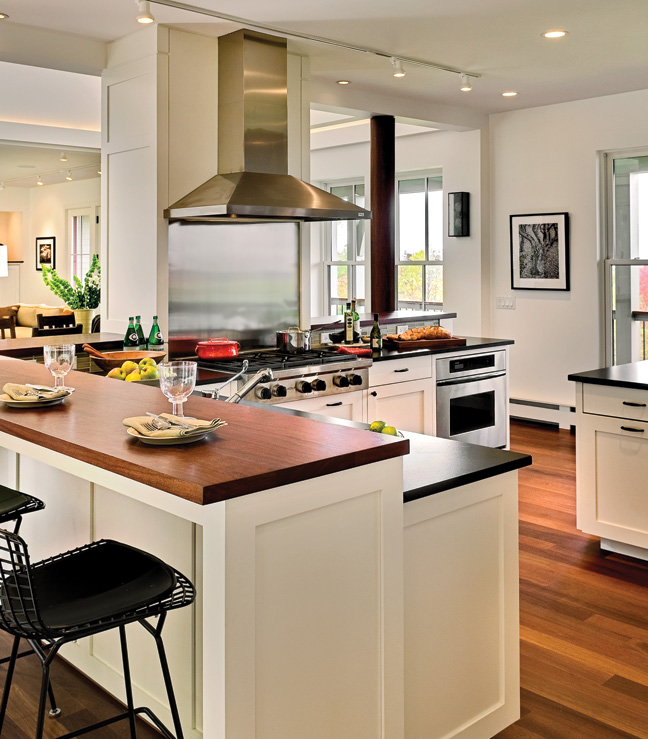 Open to the rest of the great room, yet buffered by bar-height counters, the kitchen is at once social, practical, and refined. Classic white paneled cabinetry and honed black granite counters are juxtaposed with the warm wood tones of the floor and the curves of Bertoia bar stools.

In this case, the change in ceiling height and the strategic use of four striking wooden columns do the work of separating the dining space from the living room on one side and the kitchen on the other.

The interior Smith & Vansant created shares the light airiness and long views of the Tribeca loft the family left behind in New York. The colors are exceedingly simple-creamy white walls set off with dark coumarou (also known as Brazilian teak) floors, countertops and columns. The balanced, simple palette helps to highlight the beautiful outdoor views and set off the homeowners' evolving art collection.

The palette also has another role: to unify the home's three parts-both indoors and out. From the home's new center, the dark flooring leads off to the master suite in one direction. The same wood travels up the banister of a new staircase to the children's rooms at the other.

Outside, a new porch-"also with rich brown decking," Smith says-runs the length of the western wall. Extending the outdoor season remains the architectural Holy Grail in New Hampshire, and the porch was designed to do just that. The family gained a tremendously versatile outdoor living space, complete with a built-in grill and wood-burning stove for chilly nights.

To bring harmony to the home's exterior, all sections of the house-new and old-were wrapped in wooden shingles. Their soft, natural tones were chosen to help the house settle into the site, which is yet another way of integrating architecture and landscape. The shingles also mitigate the large home's scale.

New windows throughout promote the cohesive look. Furthermore, they bring the expansive mountain view all the way to the front door. "You can literally see through this house now," Smith says.

And what a view it is. In the autumn, the rich yellows and reds of the maple and birch forests below are especially striking. The homeowners have compared this sight to living in a tree house. And as they've discovered, a terrific view is much harder to create than a wonderful house.

"It is really gratifying," Smith says, "to take a house that doesn't work well and isn't beautiful, and utterly transform it. It's a great feeling."