More than Just a House for Boats

Now that it’s redesigned, a boathouse on Lake Sunapee is where guests—and even family members—love to stay. 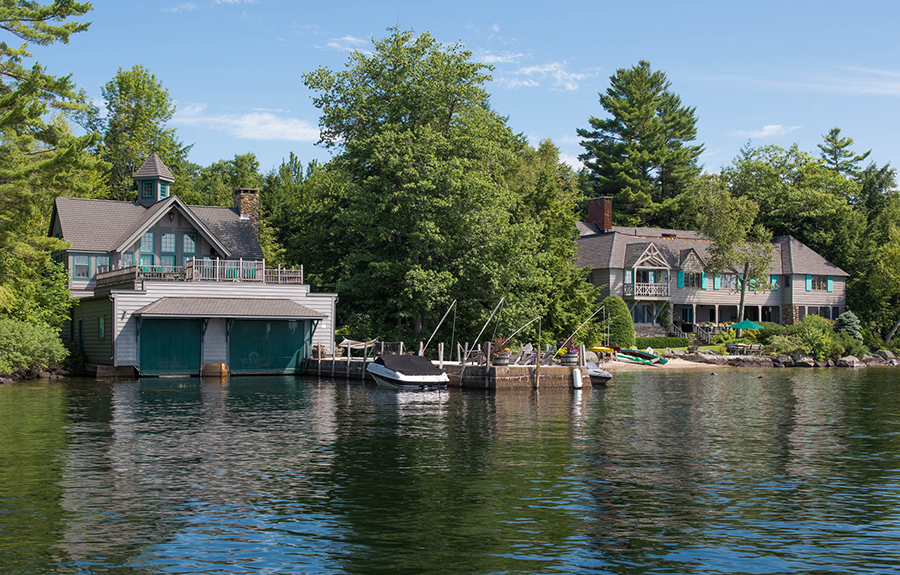 The homeowners envisioned a boathouse that was comfortable but also incorporated some of the same design principles as the main house (to the right), such as the color schemes and architectural elements.

In architecture, when form and function enhance one another, the result can be spectacular. And that is the long story made short about a boathouse with an attached guesthouse on Lake Sunapee.

As part of a property that once included four buildings on five lots—originally they were part of a family compound but were sold to several owners over the years—the boathouse and the house attached to it were offered for sale in 1998. The next owners weren’t far away—they were next door, in the property’s main house, a large, splendid lake house designed by Prentice Sanger in 1927. (Sanger, a local architect, also renovated The Fells in nearby Newbury for John Milton Hay’s son, Clarence, and his wife, Alice, in 1915.) The main house has a grand entry and great room as well as spectacular views of the lake and mountains.

To interpret their vision, the homeowners turned to the team they worked with when they did some renovations to their main house: architect Philip Laird of ARC/ Architectural Resources Cambridge in Cambridge, Massachusetts; builder Louise Bonfiglio of McGray & Nichols in New London; and designer Nannette Lewis of Nannette Lewis Interiors in Chestnut Hill, Massachusetts. “They were our first choice because they are a great team,” says the homeowner.

The homeowners envisioned a boathouse that was casual and comfortable but that also “made an architectural statement.” They wanted to incorporate some of the same design principles as the main house when it came to the color schemes and  architectural elements. “We wanted continuity when you walk from the main house to the boathouse,” says the homeowner.

In keeping with New Hampshire state regulations protecting shoreline development, Laird designed the living quarters within the existing footprint and scale of the original boathouse. His challenge was that since the house portion of the boathouse was directly on the shoreline and attached to the part of the building that houses the boats, “we could not extend beyond the roof lines or the foundation lines,” he says. “Every inch had to fit within the volume of the old building.”

Inspired by the unique requirements of boat design, where every inch of space is important, Laird created a building that from the outside looks and feels like a cottage belonging with the main house. On the ground level are two bedrooms (each with a full bathroom), a small laundry and direct access to the boat slips. Off the spacious entry is a full stairway to the second floor; midway is a nautical-style half bath.

The second floor features an open plan with a kitchen, a dining area and several seating areas. The south-facing end of the room is lined with twelve-foot-tall windows that open up to a seven-hundred-square-foot deck and provide spectacular views of Lake Sunapee and the surrounding mountains.

Laird wanted the building to feel like a summer cabin, and so he used straight-grain Douglas fir, natural stone for the fireplace and countertops, and plenty of windows to bring in natural light. Inside, the post-and-beam structure is open and exposed, since Laird says he likes “expressing the structure of houses.” To achieve a decorative look for the beams, he worked with structural engineer John Born of John Born Associates in Cambridge, Massachusetts, to design black metal collar ties that connect to black metal disks. “These pieces are structurally important for a peaked ceiling or vaulted roof,” Laird explains. “Although you often see wood used for collar ties, we wanted a different look.”

Bonfiglio says that using wood would have given the ceiling a heavier look. She also explains how precise the process was to frame the roof and the cupola, which Laird oriented diagonally both for visual interest and for dispersing natural light inside. “Since the metal pieces are recessed into the wood and all the pieces had to fit perfectly, we built a staging platform on the deck and assembled the beams there,” Bonfiglio says. When it was complete, the entire structure was raised in one piece.

For the interior, the homeowners wanted what they call a “more modern Adirondack look” with natural materials and colors that Lewis says convey a “happy feeling. We wanted blue—especially the color of the lake—along with greens, reds and yellows to give the rooms a lighter, airier feeling.”

Lewis’s inspiration for the color scheme came from the Tibetan rug she found for the dining area. She then pulled those colors into the drapery fabric in the great room, a print with animals and trees. In the center of the great room is a large sea-grass rug. “It’s pretty sturdy and great when there’s lots of kids and company,” Lewis says. “I wanted to choose durable fabrics that were not too precious and could take some wear.”

And that was a good decision because a lot is always going on at the boathouse. In addition to it being a gateway to all the water activities on the lake, its deck is the place for yoga classes on sunny days (classes move to the great room when it’s rainy) and also for cocktail parties to marvel at sunsets and shooting stars. “In summer, there is a very fluid connection between the boathouse, the dock house, the dock and the boats,” says the homeowner. “There’s a constant flow in and out of all the spaces.”

But one spot is clearly everyone’s favorite: the window seats facing the deck. “They are so comfortable that some people don’t even use the beds when they stay over,” the homeowner says. “Waking up at the window to the wonderful views of the mountains and the lake, you feel like you’re in a houseboat right over the water.”