Many couples move to smaller homes once their children have grown up, but Elizabeth and Richard Foemmel went against the trend, leaving their carriage house in Boston for an eight-thousand-plus-square-foot residence in Nashua.

The shingled gray Edwardian, built in 1901, sits on two acres along a residential street that's a fifteen-minute walk from the shops and restaurants on Main Street. The home has six bedrooms, six fireplaces, a library, a conservatory, a pond out back and a great deal more. All that room makes it a perfect house for entertaining, and also a place where the Foemmels' son, daughter and grandkids can comfortably stay when they visit. After all, Elizabeth notes, children do come back occasionally,

The search for a new home began about ten years ago. The Foemmels have lived in many places-including England, Germany and Nova Scotia-but had never renovated an older home, which Elizabeth especially was inclined to try. Whatever its age, the house had to be within fifty miles of Boston, where Richard was working at the time.

The stately old mansion the couple discovered on a picturesque residential street in Nashua (just within that fifty-mile limit) certainly qualified as a fixer-upper. "It was in total disrepair," Elizabeth says. "The first time we looked at the house, we walked out humming The Addams Family theme song." Outside and partly inside too, the color scheme was monochromatic: "Everything was brown," Elizabeth says. 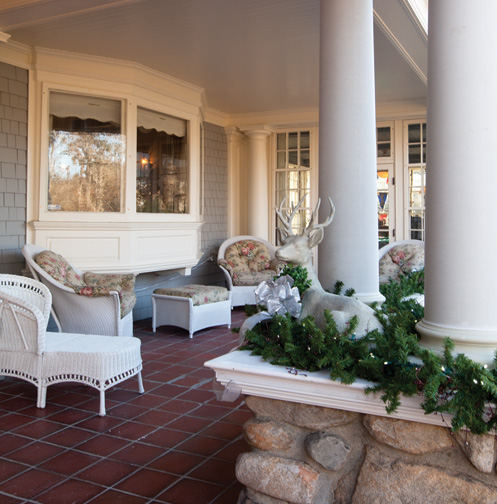 A white reindeer resided on the Foemmels’ porch during the holidays.

Despite its obvious need for TLC, the house had a lot going for it. For starters, it had some of the grandeur of seaside mansions in Newport, Rhode Island, Richard says. The wealth and variety of windows, some with intricate decorative leading, added to its appeal. Inside, the Foemmels noticed its excellent flow. A broad staircase rises from the central hallway, turning at a landing illuminated by a lead-paned window. Of the house's eighteen rooms (not counting bathrooms), some, like the conservatory, are full of light; others, like an upstairs room where Richard likes to read in the winter, are wonderfully dark and cozy. The Foemmels also liked the neighborhood, which contained an eclectic mix of older houses. (The houses turned out to have wonderful owners, too, the Foemmels note.)

One of the most striking features of the building, both for the Foemmels and for anyone entering it for the first time, is the abundance of rich and elaborate wood detailing. The home's original builder was I. Frank Stevens, owner of the Maine Manufacturing Company-"a big employer in Nashua," Richard says. Maine Manufacturing made wooden ice boxes, and while there's no way to know for sure, the Foemmels surmise that as a result of Stevens's industry connections, he may have had special access to woodworkers and wood for this home.

Whatever his sources, Stevens's fondness for wood is clear: in the moldings around doors and windows; in built-in bookcases and window seats; and especially in the coffered ceilings of many of the rooms. These ceilings provide an "Old World" flavor to the house, particularly in the dining room, where the coffers are thirteen inches deep. Many of the floors are made of variegated "tiger" oak, and other rooms feature mahogany. An upstairs storage room has wall-to-wall oak wood cabinets, all with their original hardware. 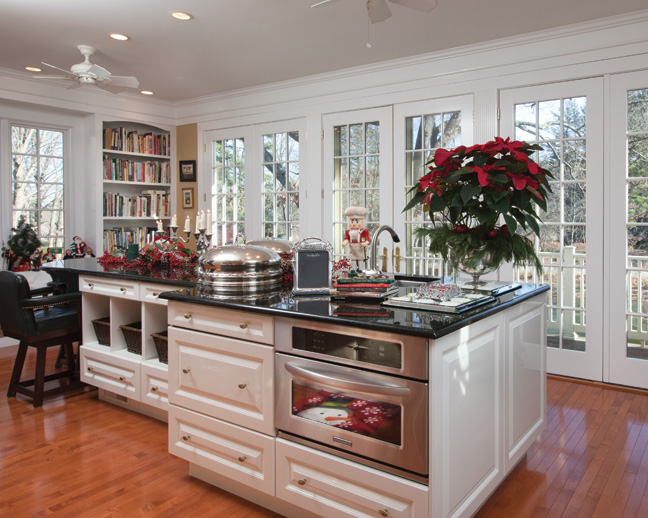 A major part of the renovation involved bringing light into the kitchen, which was accomplished by adding French doors along the wall facing the back yard and pond.

Shortly after the Foemmels bought the house but before they moved in, Richard realized he had a difficult time remembering the layout. "There were so many rooms, it was hard to visualize," he says. Because a floor plan didn't exist, Richard made his own, walking room from room to room and measuring. Apparently, he did a good job, because when he asked contractor Jim DellaGatta of DellaGatta Contracting Company in Nashua about hiring an architect to draw up proper plans, DellaGatta told Richard his homemade plan was just fine.

Getting a handle on the layout was just one of the challenges the Foemmels faced early on. Anyone renovating an old home can expect surprises. For Richard and Elizabeth, the surprises were both good and bad. A good surprise was that the heating system, which was at least fifty years old, did not need to be replaced. At first, the Foemmels weren't sure it was working but were pleased to discover that it was just turned off in particular sections of the house. Eventually the system will need to be replaced, Richard acknowledges, but for the time being, there was money to spend on other aspects of the house, such as rot-one of the bad surprises.

The Foemmels eventually had to replace about ten of the home's front columns. "Columns add to the character of the house but are a maintenance issue," Richard says. The bathrooms also needed attention, though wherever possible, the Foemmels retained the original bathtubs, sinks and tile. The toilets, for the most part, were beyond saving. 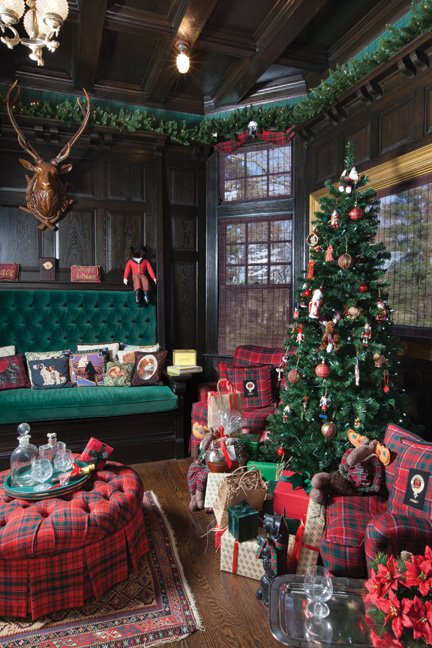 A nutcracker tree, one of many trees thematically decorated for the house tour, uses many ornaments purchased while the Foemmels lived in Germany. The fabric on the chairs is the Grant family tartan of Elizabeth Foemmel’s mother.

In fact, although almost every room needed extensive refurbishing, DellaGatta says, he and his crew were able to retain most of the original woodwork and moldings, or at least duplicate them, as with the aforementioned columns. "We tried to make the whole place look like it did back when it was built," he says. The entire house had to be rewired, DellaGatta says, and a dumbwaiter that's no longer in use came in handy as a chase for cables and wiring.

An unexpected challenge for the Foemmels was the need to replace light fixtures-lots of them. Most of the originals had been removed by previous owners and, in some cases, replaced with inferior units that weren't in keeping with the look of the house. At first, Elizabeth was daunted by the task of finding suitable replacements, but the Internet came to the rescue: "We learned a lot about eBay," she says, estimating that she ordered at least forty fixtures online before she stopped counting.

Everything old is new again

Many renovations of older homes involve "brightening up" interiors with lighter wall treatments and additional windows. This certainly was the case with the kitchen, which had just two small windows looking on to the back yard and pond. This room would have been used by servants, Richard notes, so views probably didn't figure prominently in the design. In any case, the duck pond out back would not have been something people particularly wanted to look at back then.

The Foemmels opened up this kitchen space, first by combining it with an adjacent servants' dining room and then by adding eight-foot-tall French doors along the back wall. Now, the Foemmels can look on to the pond-these days, a desirable water feature rather than an eyesore. They also added a deck that can be accessed from the kitchen. Inside, a huge Aga stove (something Elizabeth had always wanted) takes center stage, while a center island provides additional workspace.

The whole house didn't receive "the light treatment," however. The Foemmels left much of the woodwork, such as the coffered dining room ceiling, dark. This is a style in keeping with one of their signature pieces, a massive 1860s hunt chest cabinet they bought in Germany some years ago. The chest covers an entire wall of the living room and reaches the ceiling. (Ever since the couple bought that piece, it has-to a certain extent-dictated the type of house they can buy, Elizabeth says. No low-ceilinged 1700s Capes for them.)

Initially, the Foemmels did their own landscaping. "We ordered about 150 plants from Weston Nurseries in Massachusetts, and our neighbors helped us plant them," Richard says, adding that most of those plants survived. These days, a local landscaper helps out with the grounds.

In terms of interior design, the Foemmels did quite a bit on their own, although they had help from Cathy Kert, a designer who is no longer in the business. The couple already had an extensive collection of artwork and furniture (such as the hunt chest) that fit the style of the home.

The home also suits the Foemmels' style. Part of that suitability means lots of room for entertaining, including holiday soirées, a Kentucky Derby party and fundraisers. "Ours is a home that has hosted a lot of events," Richard says. "We have had up to one hundred people here." One of the most important of those events was their daughter's wedding in 2005, complete with a 1920s theme and a tent in the front yard.

The Christmas season is also a significant time for socializing-and decorating. "It's a favorite holiday of ours," Elizabeth says. The Foemmels always do a fair amount of Christmas decorating, but last year, they pulled out all the stops because the house was part of the Nashua Symphony Association's Holiday House Tour. (Richard is a former president of the board of trustees of the Nashua Symphony Association.)

The seven Christmas trees in different areas of the house were key elements. Some represented ongoing traditions; others were added for the house tour. Included were a children's tree (which the Foemmels first used when their grandchildren began to arrive); a Wedgwood tree; a gambling tree (created after the Foemmels' son returned from a trip to Las Vegas shortly before Christmas); and a nutcracker tree with decorations purchased during the Foemmels' time in Germany. A lucky accident was the "silver" tree in the dining room, which Elizabeth created quickly. "It was last minute," she says, "but I was very happy with it."

Other decorative elements included a set of choral singers on the landing, holiday table settings, mantelpiece greenery, wreathes, and numerous other decorative elements, large and small. Elizabeth and the Foemmels' housekeeper completed the extensive decorating project themselves in nine months, an effort that gave new meaning to keeping the spirit of Christmas alive year-round.

The Foemmels' house isn't just for public entertainment, though; for all its spaciousness, it's also surprisingly cozy-the perfect home for a couple who enjoy hobbies, collecting, their grandkids and each other. They make good use of the space. Richard and Elizabeth, for example, each have their own office, "which is a real treat," Richard says.

One of their favorite spots is the front porch, to which they added a roof and front wall during renovations. It's a wonderful place to sit together with a glass of wine in the evening, and for Richard to read the paper in the morning. Set back from the sidewalk, but partly open to the neighborhood, the porch reflects perfectly the public and private roles of the house itself.<