New Dividends for an Old Bank

Glass artist Shandra McLane repurposed a historic building as a studio to create and display her artwork. 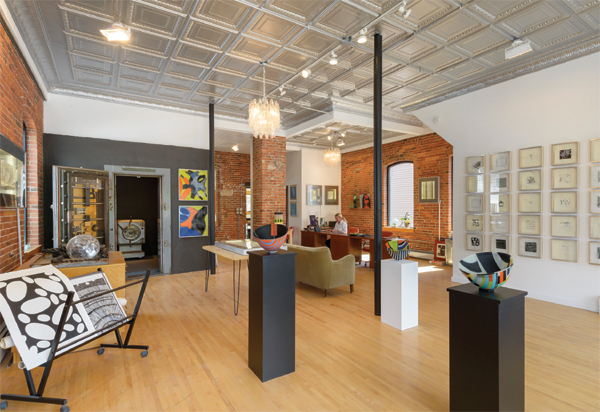 Five years ago, artist Shandra McLane discovered that she had outgrown her home-based glass studio in Bridgewater. For a year, she had been happily crafting her signature glass bowls in a studio attached to her home. Eventually, however, safety considerations—plus a need for more room and power to operate her two kilns—led her to seek a new creative space.

Through a friend, Shandra rather quickly discovered an ideal space: a historic bank building next to the river on Main Street in Ashland. The building had been on the market for seven years but hadn’t been listed recently. The old bank appealed to her right away. “As an artist, I’m interested in things with history and character,” she says. The handsome 3½-story brick structure with distinctive arched windows was built between 1910 and 1913, and served as the town bank for many years.

Now the bank has found new life as Squam River Studios, incorporating a gallery on the main level, and a kiln room and a fabrication studio on the lower levels. (There is a private apartment on the top floor.) It’s an ideal location for Shandra’s varied works, including glass prints made through a process called vitreography, large casting relief forms (such as an Arctic char representing fish migration), and her signature bowls.

Shandra and her husband, Ben McLane, bought the building in 2012. With help from their friend Dave Clark, Shandra and Ben renovated the structure themselves, taking about seven months to complete the job. This involved breaking down subdivisions of sheetrock and dropped ceilings that had been added through the years.

It was more a process of revealing what was already there than anything else, Shandra says. “There wasn’t much to redo. We just took everything out, while trying to preserve everything that was original.”

As Shandra and Ben peeled away the subdivision layers, the couple found some surprises: a tin ceiling and the original bank vault, complete with locked safe inside it. The ceiling needed a few repairs here and there; the brass and glass vault door was a thing of beauty.

In terms of additions, Shandra and Ben replaced the electrical wiring and installed new heating systems. The couple also put in new hardwood flooring on the main level and a poured concrete floor in the basement.

By 2013, the studio was operational. The main level—where Shandra’s art is displayed—is an airy space with exposed brick walls; a high, tin ceiling painted silver; and plentiful natural light. Glass chandeliers reclaimed from a different old bank hang from the ceiling. The chandeliers, originally from Italy, were purchased at Just L Modern Antiques in Littleton. The main level also includes a sitting area and office space. The bank vault is used for art displays, and for housing the charming, old and empty safe.

The kiln room—which is half a level down from the main level facing the water—houses two large kilns and two smaller portable kilns. The kiln room is conveniently close to but separated from the rest of the building by a brick wall for safety’s sake. (The kilns operate at very high temperatures.)

The basement—where most of Shandra’s creation takes place—includes a sandblasting room, a darkroom, a washing station and several glass work stations.

Another notable feature of the building is the original vault alarm and light, which were part of the restoration. The words “VAULT ALARM” in white capital letters against a black background on the outside of the building add a graphic, retro look. The overall thoughtful repurposing of the old bank earned Shandra a 2014 Preservation Achievement Award from the New Hampshire Preservation Alliance for revitalization of the property. 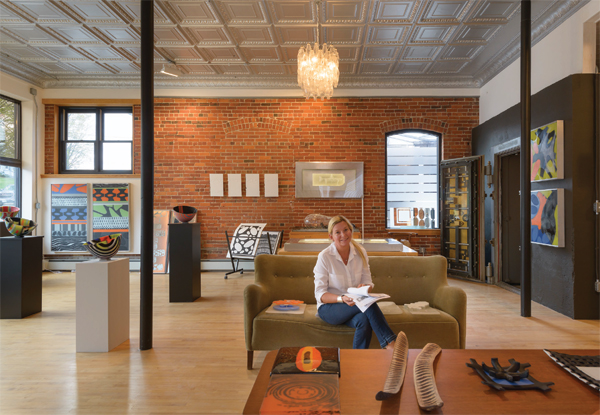 Shandra McLane sits on a couch in the gallery. Above her is a rediscovered tin ceiling, now painted silver.  Behind, to her left, is the open vault door.

Shandra’s interest in sustainability is expressed through her art as well as her reclaimed workplace. She began working in glass some years ago at Pilchuck Glass School, which was founded by the world-renowned artist Dale Chihuly, in Washington state. She and Ben (who grew up vacationing on Newfound Lake) moved to New Hampshire about eighteen years ago. Shandra has since earned a master’s of education in integrated arts from Plymouth State University, where she teaches as an adjunct professor.

Shandra’s career reflects her zeal for collaboration and ongoing learning. She has completed several residencies, including a trip to Svalbard, Norway, in 2015, which sparked an interest in environmental themes, such as oceans and seeds. Svalbard, which is 10 degrees from the North Pole, is home to the Global Seed Vault (a long-term seed storage facility built to protect crop diversity in case of natural or man-made disasters).

After that trip, Shandra began to create ocean-inspired works that reflect on climate change and the fragility of our world. Subjects include glacial retreat, coral bleaching, the migration of fishing patterns and land erosion. Shandra is also working on a line of fabrics that incorporate digitized patterns of seeds from the seed bank. “Something that’s been crossing my mind,” she says, “is that I’m working in a bank with a vault and I’m also working with the Global Seed Vault.”

Most recently, Shandra and five other artists were awarded a John H. Hauberg Fellowship through the Pilchuk Glass School to write a book on vitreography.

Shandra is pleased with her repurposed space. “It has a good energy,” she says. She is tickled by what the original builders of the bank might think of it now. “Would they ever have thought that it would be an artist’s studio?” she wonders.

The bank/studio may see other uses in years to come. “This building was built to withstand the test of time,” Shandra says. “I’m just borrowing it for now, and I feel it’s my obligation to take care of it.”

Shandra McLane creates numerous types of glass artwork, including lamps (right) and prints (left) created through a process called vitreography. Above on the left, she is using a glass powder technique; in the middle, sandblasting stencils.
Shandra McLane received a 2014 Preservation Achievement Award (right) from the New Hampshire Preservation Alliance for her work in thoughtfully repurposing the old bank (seen at above from the rear, along with her addition to the building).
The lower level of the building is a work space where most of the art creation takes place (left). The kiln room (right) is half a level down from the main area, in the addition to the building. Prior to the renovation, the brick wall was the bank’s exterior.
Categories: Architecture and Interiors, Artwork and Design