A twenty-three-room home designed by renowned Boston architects Peabody & Stearns in 1891 now produces nearly all the energy it uses. 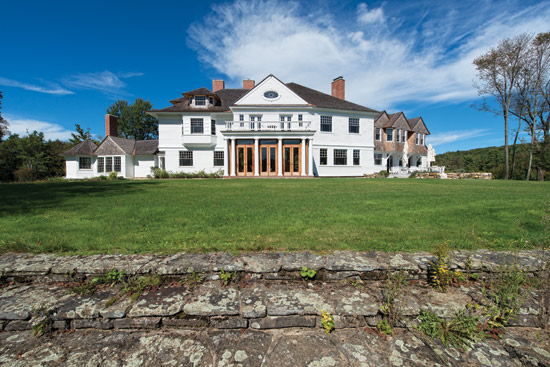 Built along a ridge of a hill to take advantage of striking views, this elegant house is one of the largest summerhouses in the Monadnock Region.

Most architects say it’s easier to build green when you’re constructing a new home, and anyone who’s restored an old home can regale you with tales of unexpected challenges during the process. So, imagine merging these two design goals—that is no easy task.

But that’s just what Daniel Scully, of Daniel V. Scully/Architects in Keene, was retained to do by H3 Hardy Collaboration Architecture LLC, a New York City design firm: evolve the design of an architecturally significant home and guide the project through the construction process. Thanks to Scully’s efforts and the team he assembled, this home is now preserved for generations to come and is also extraordinarily energy efficient. This combination was of utmost importance to the homeowner, who, Scully says, is a dedicated environmentalist and wanted the home to be as close to net zero (producing as much energy as it uses) as possible.

“There was a lot to reconcile with preserving this home’s design and modernizing the building in an energy-efficient way,” says Katie Cassidy Sutherland, associate architect and project manager with Daniel V. Scully/Architects. “There are so many design details in the envelope of the building, and we wanted to leave the interiors intact.”

A preeminent country house of its era

Built along a ridge of a hill to take advantage of striking views, the elegant house was designed by Peabody & Stearns in 1891. As one of the largest summerhouses in the Monadnock Region, local historical records refer to it as a “monumental landmark.” The nine-thousand-square-foot home had eight bedrooms, seventeen gables, five-and-a-half baths and a service ell with a kitchen, servants dining room, bedrooms and bath. An elegant stairway with large landings and windows leads to the second and third floors.

Following H. H. Richardson’s death in 1886 (he was the architect of Boston’s Trinity Church), many considered Peabody & Stearns to be Boston’s leading architectural design firm. Its list of more than a thousand commissions is impressive. Commercial projects include the Custom House Tower, R. H. White Warehouse and the Exchange Building, all in Boston. The firm also designed exceptional second homes, such as Pierre Lorillard’s The Breakers in Newport, Rhode Island; William Forbes’s cottage on Cape Cod; and James Ford Rhodes’s Ravenscleft in Maine.

For the project, instead of taking the home apart from the inside to insulate, the renovation began on the outside of the building, which had peeling lead paint. “The entire exterior was  removed, which provided access to the frame for inspection, repair, insulation work and control of lead-paint issues,” says Peter Bonneau, project manager of MacMillin Company, based in Keene. “When the ‘skin’ was off, we sprayed foam insulation between the studs and then added an additional layer of insulation before the trim went back on.”

This “blanket of insulation,” as Scully refers to that additional layer, creates a better building envelope, since the cold doesn’t pass through the frame. “Lots of newer green buildings are built this way,” Sutherland says. “It’s more labor intensive and costly to build, but it’s more energy efficient.”

But before the old siding was discarded, samples were made of each of the forty-two pieces, which Scully wanted replicated. “We saved all the different shapes and photographed everything,” Bonneau says, “and have more than five thousand pictures so we could re-create all the shapes. Architecturally, we were tasked with keeping the same house.”

When the roof was opened for insulation, the builders made an exciting discovery. “We found ‘dragon-tooth’ shingles on the third-floor roof,” Bonneau says. “With every five or six rows of the wooden shingles, there was a row with a saw-tooth cut.” Over the years, the roof had been changed to asphalt shingles, and Scully wanted it returned to cedar shingles with the saw-tooth cut.

Blending old and new, and designing for energy efficiency

Sutherland says one of the more exciting aspects to this project was “how to insert the new into the old.” One way that was done was with an approximately three-thousand-square-foot addition that includes a two-car garage and a mechanical room in the basement. “We took our design cue for the addition from the fact that the house was a rambling arc on the site and kept that same character with the garage arching around the front,” Scully says. “The swoop on the driveway side is consistent with the Shingle Style but has a little more of a sweep than the house had.”

Since the homeowner wanted the house to be as close to net zero as possible, mechanical engineer Dan Lewis of Kohler and Lewis in Keene recommended a ground-source heating and a photovoltaic (PV) electrical system. The 216 PV collectors, neatly arranged in a field behind the house, create direct current. “The basement houses the inverters that change this direct current to the alternating current used in the house,” Bonneau says. “The inverters send the excess power back to the grid when it’s not needed, and borrow power from the grid when the house is using more than is generated by the photovoltaic system, such as at night.”

Lewis says that since the homeowner didn’t want ductwork or hot-air registers in the house, this necessitated a hot-water system with baseboard heaters. There is also hot-water radiant heat in the main-level floors. All this is made possible by sixteen ground-source wells that were dug to take groundwater to the heat pumps. “These heat pumps act like a backward refrigerator,” Bonneau says, “as they take heat from the groundwater and return cold water to the ground.” This water heats the house to 70 degrees and returns 36-degree water to the earth.

On the roof is a solar thermal system that provides hot water. “These panels are integrated with the roof and don’t stick out, which is nice from an aesthetic point of view,” Lewis says.

Along with the careful restoration of the exterior trim, Scully was also concerned about saving the windows. “Old windows are not expendable,” he says. “The wood used for the sash was more dense and is so much better than new wood.”

So when the blanket of insulation was added on the outside, Scully and his team were careful to only add only an inch or so of depth, allowing the original window sash, muttons and frame to be kept. “We worked with Window Master in Dublin to double-glaze the windows, which insulates and weather-strips them. We also added storm windows on the inside, which effectively triple-glazed the windows,” Scully says.

David Voorhis, owner of Window Master, says he also built fifteen new windows for the addition and the kitchen. “They match the other old windows exactly and you can’t tell the difference between the old sash and the new ones,” he says.

The reason that these old windows are such an asset to the house is that they’re made from long-leaf Southern yellow pine, a wood that’s no longer harvested. “It is a great, hard wood with a high sap content that protects the tree from insects,” Voorhis explains. That’s why he repairs old windows using salvaged wood from old barns that is then resawn to the needed lengths. While this salvaged wood is expensive, in the long run it is “a better investment to fix old windows because they last so long,” he says.

One aspect of the project Sutherland liked was trying to complement what was originally in the house with something more contemporary—“they play off one another,” she says. One such space is what used to be a pool or billiards room and cigar room that’s now a pool (for swimming) room and a spa. The roof line remains the same, and the windows have been modernized. In each of the five windows, new bullet glass (in early glass-blowing, stems of the glass were broken off and used in windows) was supplied to replicate the look of the old windows.

Another space is the open patio under classic columns that’s now a three-season porch. “This room is a nice mix of classical and more modern style,” Scully says. The clear wood frames inside the columns “play up the dialogue between old and new,” Sutherland adds. The original flagstones were removed—so insulation and radiant heat could be added—and then put back into place.

When it comes to old houses, architects, builders and other professionals agree about the importance of old materials. “There’s not a question about the value of the materials used to build old homes,” Sutherland says. “The framing materials were better, and these buildings had stone foundations and slate roofs. But it does take effort to modernize them.”

“Normally, we don’t feel good working on large houses,” Lewis says, “as they use a disproportionate amount of energy, no matter how efficient they are. But this house is historic, architecturally significant and beautiful, and its owner was committed to its being saved and becoming energy efficient. What a great project to work on!”