Cynthia Hosmer is the inspired and dedicated steward of the fabulous Seacoast garden cultivated by her mother-in-law, Marion Hosmer. 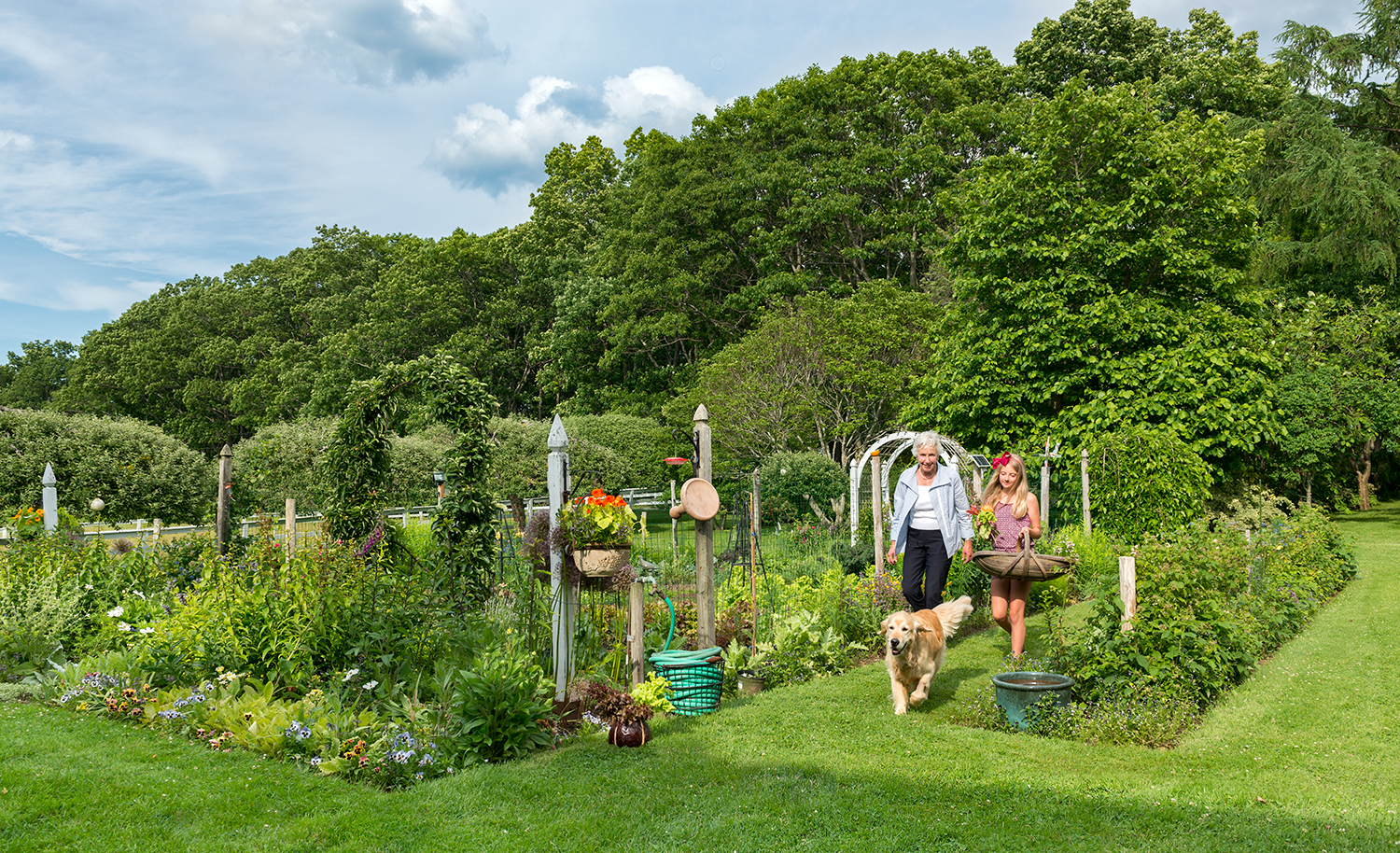 Candace Hosmer enjoys helping her grandmother, Cynthia Hosmer, in the garden. Here they are cutting flowers for bouquets, accompanied by Toby, the golden retriever.

Overlooking the ocean, Brave Boat Harbor Farm is located just over the New Hampshire border in York, Maine. The land was originally granted to the Raynes family in 1638; members of the Moore and Lucas families married into the Raynes family and lived on the subsistence farm. Headstones in the old burying ground on the property trace some of the generations and tell their stories. One commemorates Sam Lucas, age twenty-nine, and his wife Annie, just eighteen, who drowned in 1869 on their way to Portsmouth to sell vegetables they had grown. The farm continued to be run by others in the family until the early 1900s.

When Cal Hosmer Jr. and his wife Marion bought the property in 1948, the farm had been abandoned since 1910, unused except for a summer cottage built around 1935. All that remained of the old farm, other than the burying ground, was an ancient lilac hedge, old cellar holes, crumbling stone walls and overgrown fields. They moved into the cottage in 1950 with their two sons, Cal III and Thomas, and started building a new home and gardens. 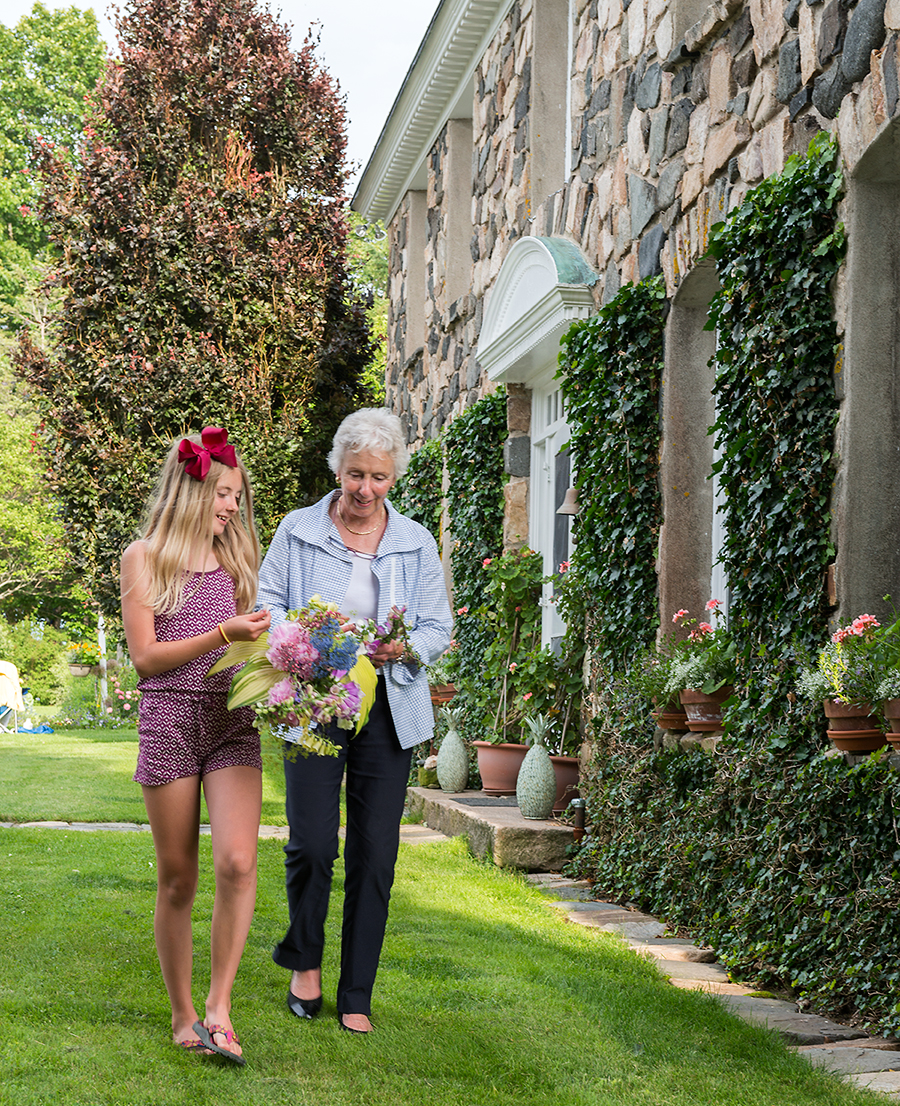 Every summer, Cynthia’s granddaughters spend time with her at Brave Boat Harbor Farm and learn by doing. Cynthia loves making arrangements from the fresh flowers and greens she grows in her cutting garden. She puts flowers in almost every room in the summer.

Marion was the gardener, and with the boys’ help, she got right to work clearing brush, rebuilding stone walls, improving the soil as well as planting, planting and planting. Along the lane leading in to the farm, she planted a double row of crabapples and an arborvitae hedge to act as a windbreaker, protecting a small orchard of apples and stone fruits she established west of the house. Inspired by English gardening magazines, she planted espaliered apple trees and pears on the south façade of the house and English ivy on the north wall of the house. She loved trees and developed an arboretum of specimen plants in the shelter of the sturdy shagbark hickories that protect the gardens around the house from salt-laden winter winds. She collected magnolias—including ‘Dr. Merrill’, ‘Leonard Messel’ and yellow ‘Elizabeth’—and grew a large vegetable garden on the east side of the house.

A stone wall shields the formal front garden—located on the south side of the house—from the elements. The walls are eight feet high on the sides of the house and step down to four feet high in front of the house. Cast concrete pineapple finials mark the corners and the gateposts. Within this seventy-five-foot-long, walled perennial garden is a stone patio with thyme growing between the pavers. There are boxwood hedges outlining the beds, which were filled with delphiniums, roses, hollyhocks, phlox, peonies, hellebores and day lilies.

To access the old burying ground, Marion cut a path through the Civil War-era lilacs. Taking advantage of the shady site, she made this her hosta path and secret garden. When she heard that a neighboring farm was cutting down its orchard of twenty-five-year-old Cortland apples, she hired a man to dig up the trees and replanted them around her yard. All but two of the twenty-seven trees survived the move! She has been quoted as saying that if she could grow only one thing, it would be fruit trees. 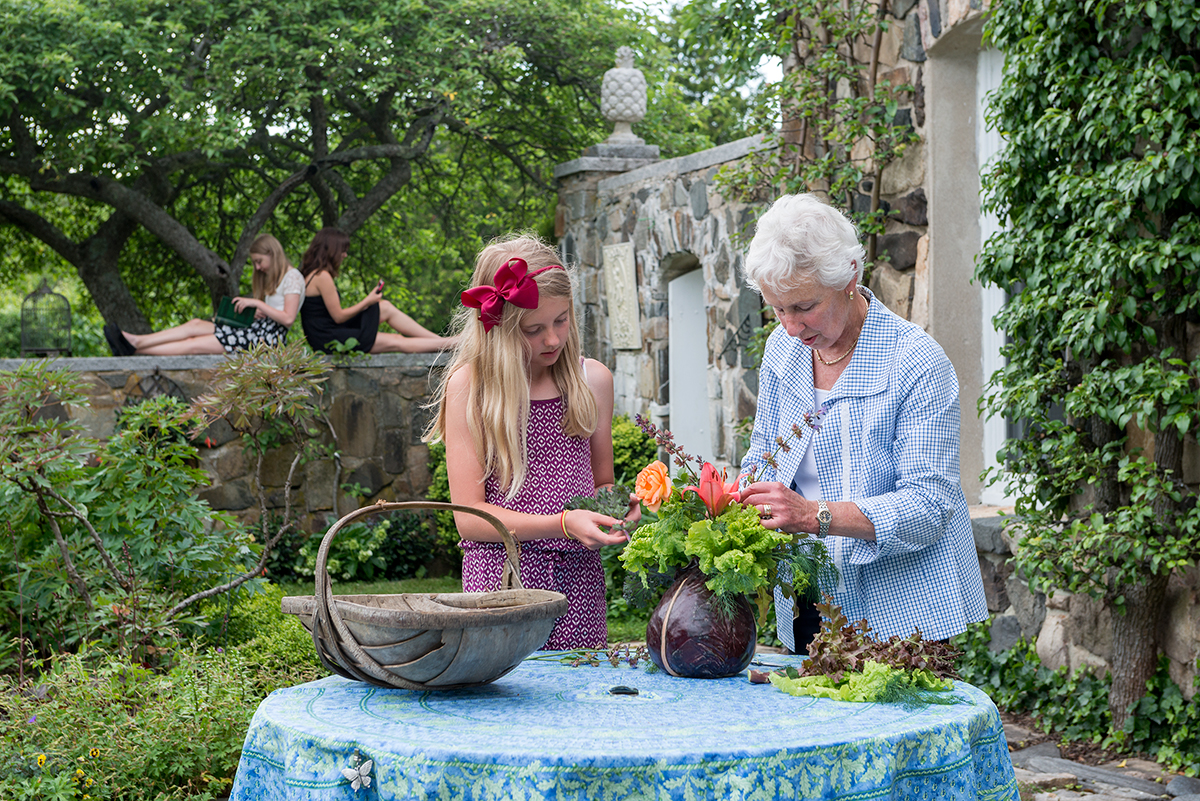 Candace and Cynthia Hosmer arrange flowers, while granddaughter Megan Hosmer and friend Emma Bell (in black dress) relax and read on the high stone wall that surrounds the front garden.

As the years passed, Cal Jr. and Marion acquired two adjoining farms, bringing their total acreage to about three hundred. Together, they created a warm and wonderful homestead that has been called one of the most spectacular properties in York.

In the 1970s, Cal Jr. donated all the shoreline on Brave Boat Harbor to the Rachel Carson Wildlife Refuge, and on his death, one of the adjoining farms was donated to the refuge as well. When Marion died in 1997, less than a year after her husband, Brave Boat Harbor Farm passed to their son Cal III and his wife Cynthia.

Even though Cal III’s army career took him and Cynthia on many assignments around the world, the couple knew they would eventually live at the farm. “I stood at my mother-in-law’s side in the garden for many years, trying to absorb her deep knowledge,” Cynthia says. “She was so willing to share; she was an experimenter and a collector, and she loved to try new plants and ideas. She was thrilled with what worked and didn’t mind tossing failed experiments on the compost pile.”

Marion kept meticulous records, documenting plans, plant names, blossoming dates as well as schedules for pruning, spraying and transplanting. Cynthia feels her job has been to add artistic interpretation to Marion’s collections. “A garden does not become your own until you have dug in it for a number of years,” Cynthia says. She has transformed Marion’s arboretum into a woodland garden, outlining the beds and underplanting the trees with bulbs and groundcovers. More magnolias have been added, including ‘Yellow Bird’, ‘Ballerina’ and ‘Yellow Jacket’.

Cal and Cynthia created a new pond—which is home to goldfish, frogs, tropical and hardy waterlilies, and water hyacinths—to act as a destination in the woodland garden. Two red pines were topped at twelve feet and connected by a chain for climbing hydrangeas to grow on, forming an arched frame for the pond. Cynthia plans to uncover more of the rocky ledge behind the pond and plant that area with mosses and epimediums.

As an experiment, Cynthia added some Japanese maples in the secret garden and along the front garden wall to replace eight large boxwoods that died after a windy, open winter. “We are constantly assessing the health and maturity of trees and shrubs, replacing them with similar forms or going off in different directions,” she says. When several of the espaliered fruit trees on the front wall of the house died after being girdled by rodents, the trees were immediately replaced. “We could pick fruit from the bedroom windows and did not want to lose them. I put hardware cloth around newly planted trees to protect them but never imagined the rodents would girdle sixty-year-old ones!” Cynthia says. 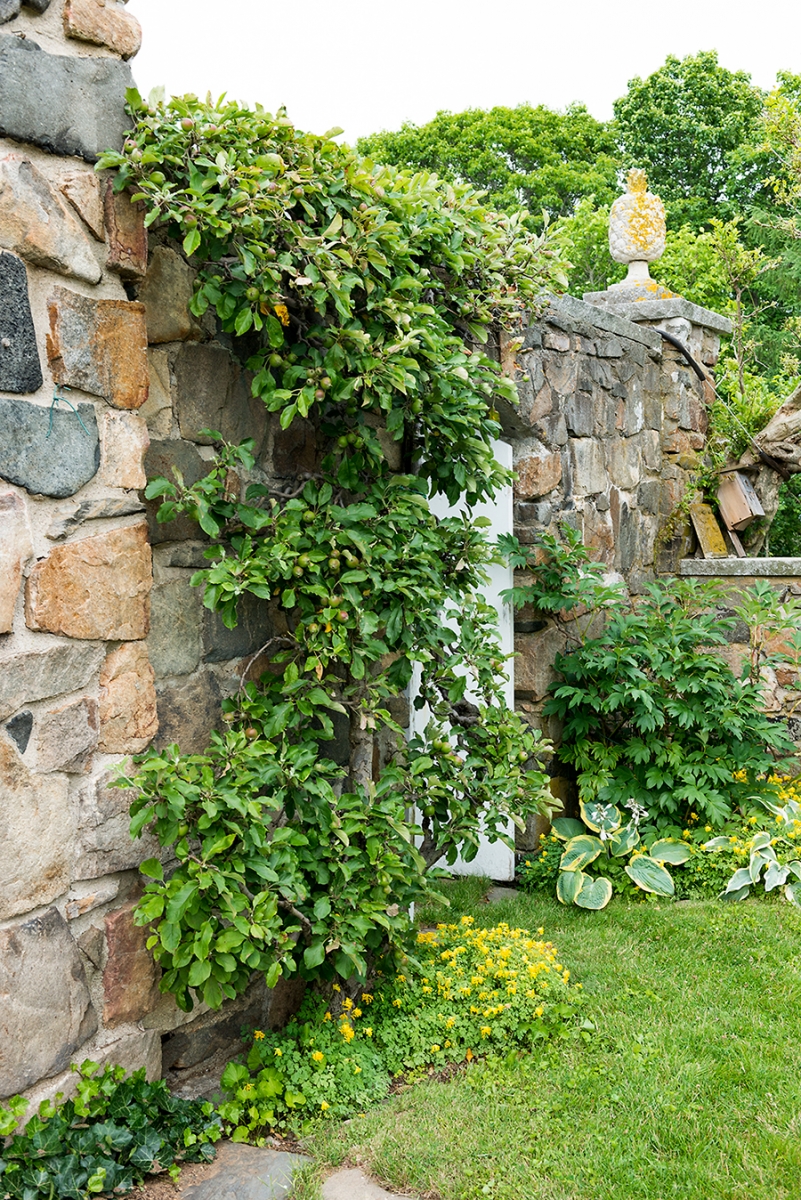 The garden wall is eight feet high in places, forming a sheltered microclimate for espaliered fruits, tree peonies and other plants.

Cal and Cynthia have built a new octagonal summerhouse on the southwest lawn that overlooks the fire pond, orchard, house and ocean. “Every panel frames a view,” Cynthia says. Behind the summerhouse, Cal and Cynthia have planted a fence-line of espaliered pears, inspired by one they saw at Monticello. Open fields around the farm are hayed every summer, and a local beekeeper tends hives there. “I get honey, and he gets fruit,” Cynthia says.

The couple has added a row of ten sugar maples at the far end of the field by the barn so the next generation can make syrup. Last summer, in conjunction with the American Chestnut Foundation, Cynthia and Cal initiated the first private/public planting of the new, disease-resistant, seventh-generation American chestnut trees by planting four young trees with the help of the local Boy Scout troop and the York Land Trust.

Vegetables and a cutting garden

Along with caring for the fruit trees and ornamentals, Cynthia grows a large, fenced-in, vegetable and cut-flower garden located on the east side of the house, just off the kitchen. Apple trees on each side of its front gate have been trained to an arch, echoing the circular wooden moon gate at the opposite side of the garden. The classic four-square parterre with intersecting, stone-paved paths has rows of colorful lettuces, Swiss chard, red and green kale, beans, broccoli, cabbage, and cucumbers planted on the diagonal, interspersed with rows of flowers for cutting. “We grow what we eat, and spend lots of time in August and September putting up the harvest for the freezer and basement storage,” Cynthia says.

The Garden Club of America
www.gcamerica.org

Single and double Oriental poppies in all shades of pink and coral are a favorite for cutting, and Cynthia cleverly marks the plants she wishes to save seeds from by slipping a plastic bread tag onto the stem. On the tag, she can write the color and variety in permanent ink. A frugal Yankee, she makes old venetian blind slats into plant labels.

Blueberry bushes grow on the corners of the beds nearest the center of the garden where a solar-powered fountain re-circulates water from a buried five-gallon pickle jar. Fragrant thyme and chamomile weave between the paving stones, releasing their scent when walked on. Peas climb up wrought iron tuteurs, and calendula, pink roses, foxglove, salvia and clematis grow inside the fence and out. Each corner outside the fence is home to a fruiting tree—weeping mulberry, Santa Rosa plum, jostaberry and crabapple. Two long beds of berries, lilies, roses and alliums flank the garden on each side. Cynthia loves the birds that visit her garden, and has feeders for hummingbirds, bluebirds, orioles and catbirds.

Such a welcoming space is always abuzz with activity. Cynthia and Cal’s grandchildren come for a month in the summer to live at the farm, taking sailing lessons, playing in the gardens, having picnics at the shore and doing chores, such as collecting eggs from the chickens each morning. Cynthia and Cal give two large parties a year to celebrate the solstices, and have hosted fundraisers for the York Land Trust, Coastal Maine Botanical Garden, The Garden Conservancy, and the Gundalow Company. Cynthia belongs to the Old York Garden Club and the Piscataqua Garden Club, and opens the gardens each summer for tours benefitting local garden clubs and plant societies. In 2017, Cynthia and Cal plan to host the Garden Club of America Flower Show. The Kittery Art Association holds several plein air painting days at the farm each year.

Carrying on the tradition

Gardens are ephemeral, and without owners who are dedicated to the gardens’ care and maintenance, they will soon disappear. Brave Boat Harbor Farm is in good hands, and the Hosmers have carried on with the stewardship of this fine property. For generations, the family has been working hard to preserve the farm and surrounding lands. In 2007, Brave Boat Harbor Farm was placed on the National Register of Historic Places, and Cynthia and Cal have donated thirty-two acres of fields and ocean frontage to the York Land Trust as part of the Mount Agamenticus to the Sea Conservation Initiative.

“Marion was the most loving and caring mother-in-law imaginable,” Cynthia says. “I can still feel her hand on my shoulder, guiding me in this mutual love of the natural world. So far, our combined efforts continue to bring this garden along an inspired path and subsequent generations will continue to nurture this special place.” 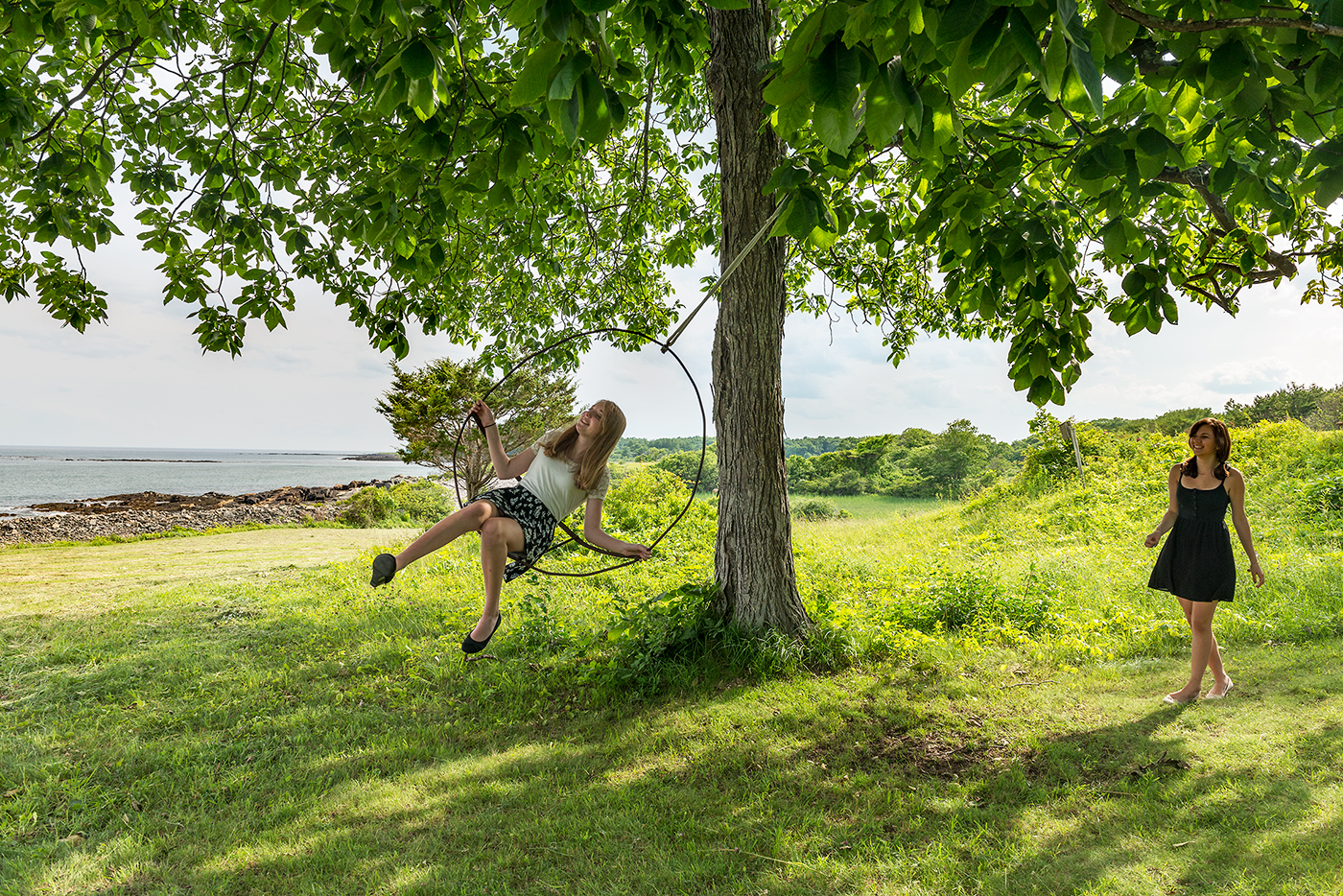 The girls enjoy ocean views from the hoop swing in this shagbark hickory. They also have set up a length of nylon webbing between trees to practice their slacklining skills. 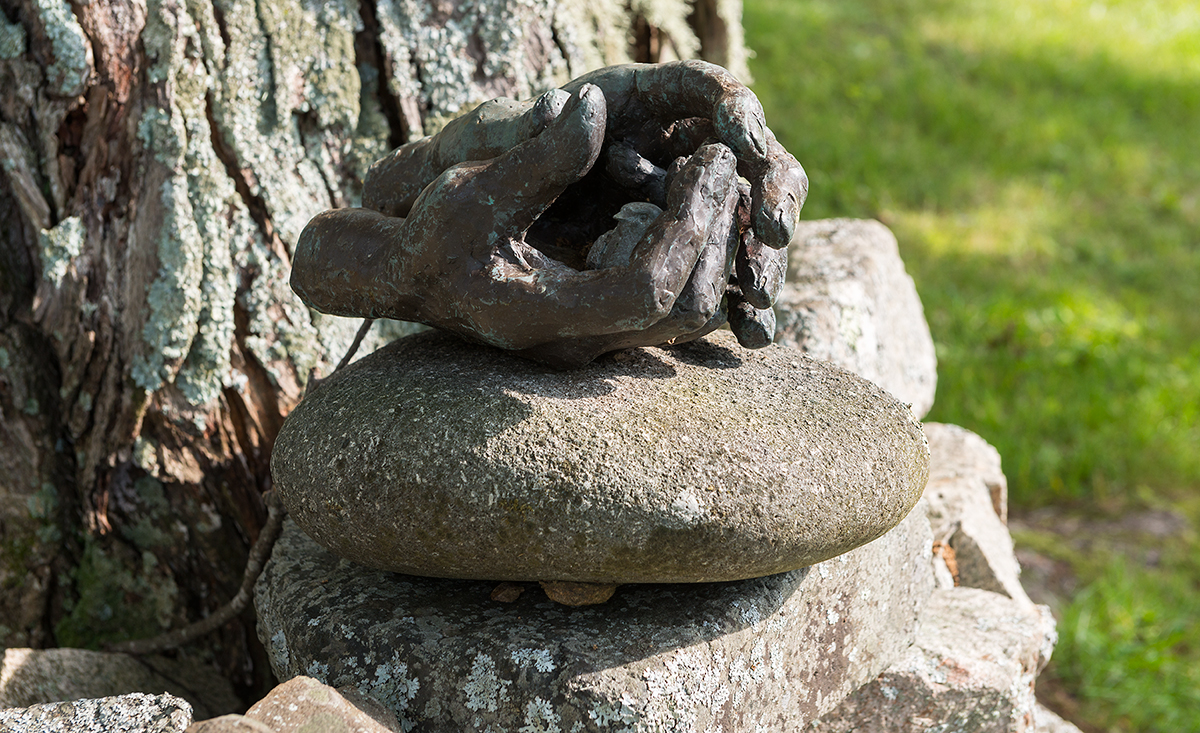 Look closely to see the tiny bird being gently cradled by weathered hands in this bronze sculpture by York, Maine, artist Sumner Winebaum. 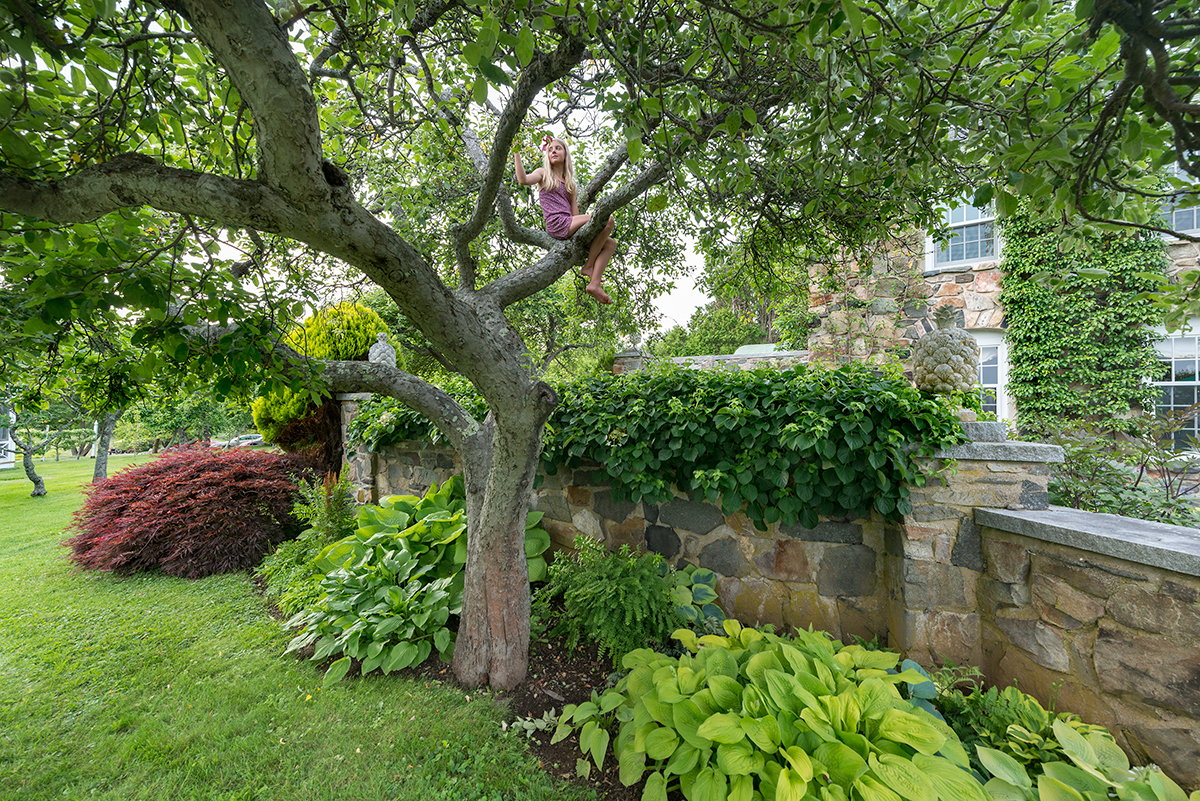 Candace Hosmer perches in an old apple tree—one of the twenty-seven trees her great-grandmother Marion Hosmer moved to the farm many years ago. Climbing hydrangeas on the wall and hostas at the base of the tree thrive in its dappled shade.