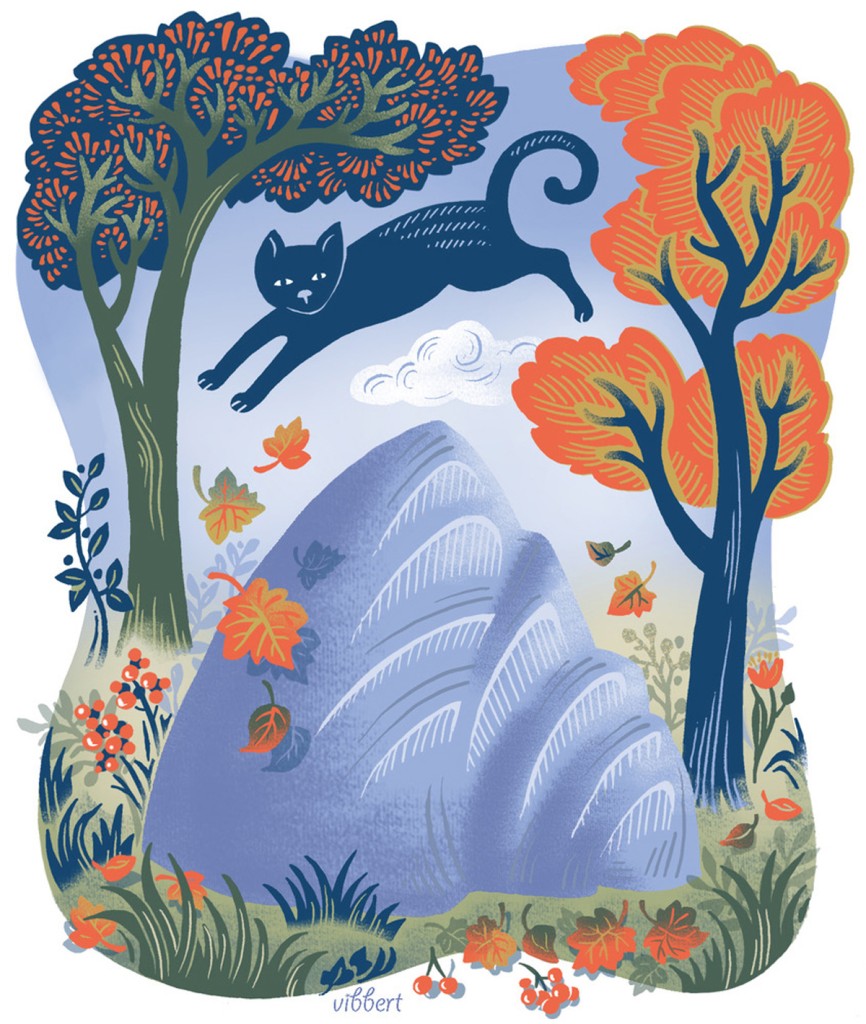 We are sauntering through the back side of Stratham Hill, a small park in Portsmouth, with an observation tower and plenty of rocks. We are, in fact, looking for one rock in particular, the oddly named Kitty Rock—so named because of a small, curious metal plaque fastened to the rock that tells of a young girl, Margaret Consalvi, standing on it and saying the name of her kitty out loud. The cat’s name and the girl remain a mystery.

Still, my 7-year-old daughter, Little Bean, loves this place. The trails are mellow, there’s a playground and that tower gives us a sightline all the way to the ocean. We’ve been here many times.

Today we’re with a friend of hers and that changes the dynamic. The girls are a bit more rushed than usual, more interested in each other than in the outdoors, and that’s fine. The mosquitoes are fierce on this late summer day, however, and that’s not as fine. So, we’re hustling in a way contrary to how we usually do things.

The girls find the stone and then surprise me. They decide that the reason the little girl from the past recited her pet’s name was to bring the cat good luck and good fortune. They decide this rock is a Pet Protector Rock. The names of the girls’ pets—Lavender and Rosie—are spoken to the skies, and we’re on our way. A new mythology of imagination is created.

I mention this story because it feels appropriate as we enter the holiday season, a time of ritual, mythology and, of course, imagination.

Recently, I found myself having to reinforce one of those myths. I suppose some would call what I did lying. Little Bean believes for example, that The Beatles still exist and that a particular Beatles cover band we venture out to see is the real thing. Imagine, your first concert is The Beatles! She’ll understand one day that seeing that band is actually my own wish fulfillment, not hers, and that may become a complicated discussion.

But then again, she also believes a rock can protect her cat. And she believes in the tooth fairy. And, of course, in Santa Claus.

We’re entering a tricky time in her life, a turning point that cognitive development pioneer psychologist Jean Piaget called the “concrete operational stage” of her thinking. In other words, she’s soon going to start asking questions, and my wife and I are going to have to decide how to ease her into that fine space between the actual truth and the qualities that Santa represents: kindness, generosity, empathy.

Whether Santa is real, The Beatles still play or a boulder protects pets shouldn’t be as important as the flare of imagination, the process of developing critical learning skills and the rituals we develop with our families.

After finding our rock, the girls and I beeline it for the playground, and they gab happily as they hike and swat away bugs. They make up stories about insects they encounter along the way, creating new creatures that live in holes along the trail. My daughter names an inchworm. She names him Rex, which seems to please the girls. I proffer the occasional factual tidbit about bees or geology or weather, but they’re perfectly happy making it up as they go.

They are children living in a world where anything is possible, and maybe we adults are just jealous. I mean, I wish that I believed with all my heart that The Beatles still existed. I feel like even just that belief would make me a tiny bit wiser of a man.

Perhaps the takeaway from all this, as we enter yet another season of make-believe, is that everything comes from something. Ritual, no matter what flavor you celebrate, can provide a connection that—dare I say this—outweighs what we perceive to be true or at least relatively true.

Children are artists and philosophers and inventors. So what if the sky they draw isn’t always blue, nor the sun yellow. Let Santa come. There’s magic in imagination, and there’s magic in just being together.

Back at home, my daughter finds her cat and lifts her into a snuggle, and for once Lavender doesn’t resist and gives herself over to my daughter’s affections. Maybe the cat felt a little something from the heavens when my daughter shared her name atop the rock. Who can say what the reality may be.