Stephanie Yen and Stephen Lee built a stunning contemporary home in Hanover to replace the 1960s split-level in which Yen had grown up. 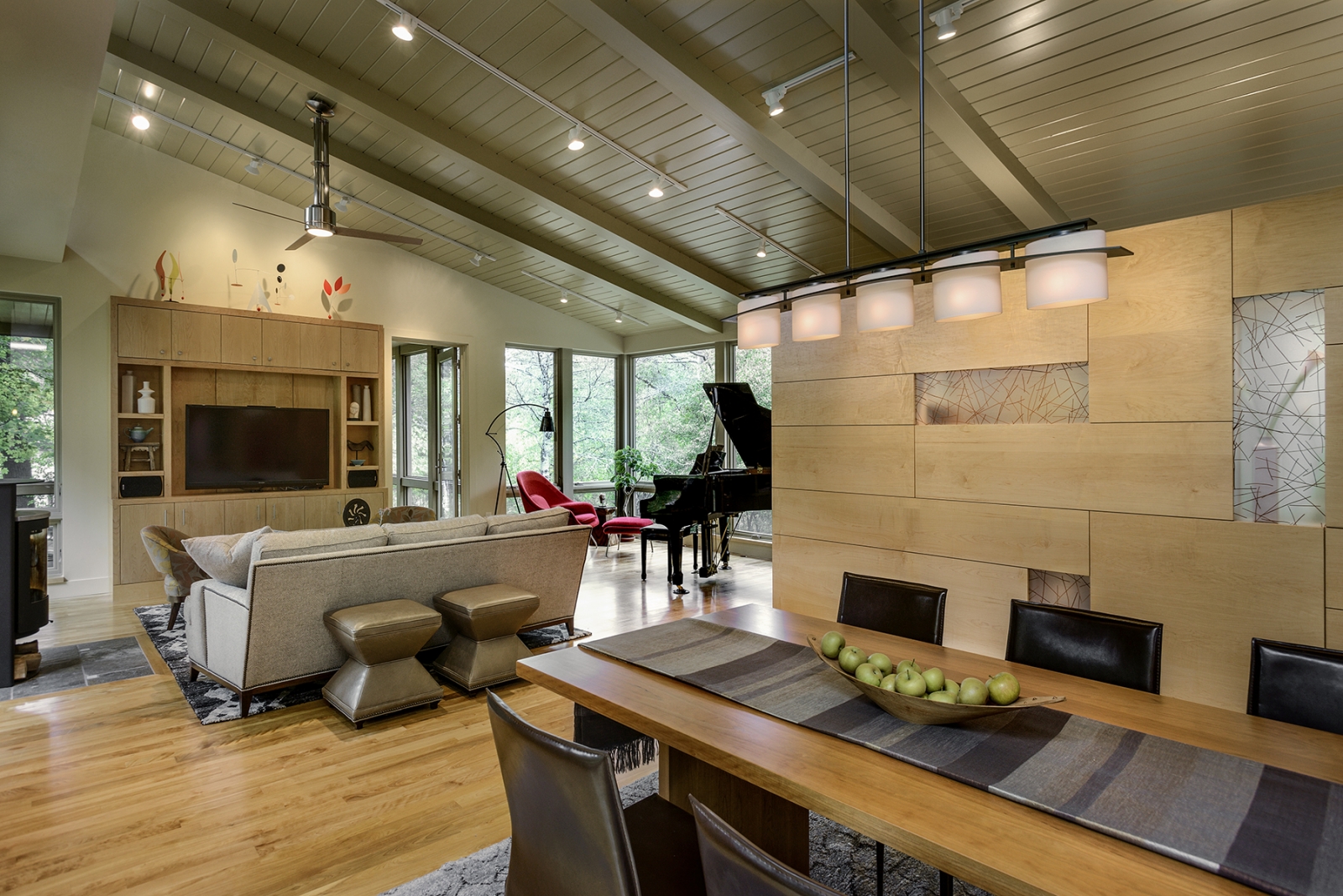 The house’s dining area (foreground) is connected to the rest of the main living space, yet set off by a wall that narrows the area, providing a sense of intimacy. The new home was designed by Smith & Vansant Architects PC, in White River Junction, Vermont.

Stephanie Yen was raised in a house on a wooded lot in a pleasant neighborhood in Hanover with a brook running by it. Years later, she and her husband Stephen Lee, both doctors, moved back to the area to work at nearby Dartmouth-Hitchcock Medical Center. In 2010, they replaced that split-level house that Stephanie’s parents built in the 1960s with a sleek, new contemporary.

The new four-bedroom house does share a couple of similarities with its predecessor—it stands on roughly the same site, surrounded by woods, and features a type of split-level plan. Otherwise, the contemporary is a complete departure, with its combination of horizontal and slanted rooflines, large and plentiful windows, and lack of conventional symmetry.

Settling on a style

The decision to rebuild was not difficult for the couple. “My dad passed away unexpectedly in January 2005,” Yen says. “My two siblings said they wanted to keep the family property, as I was now in the area, and the idea to build on the existing property was born.” 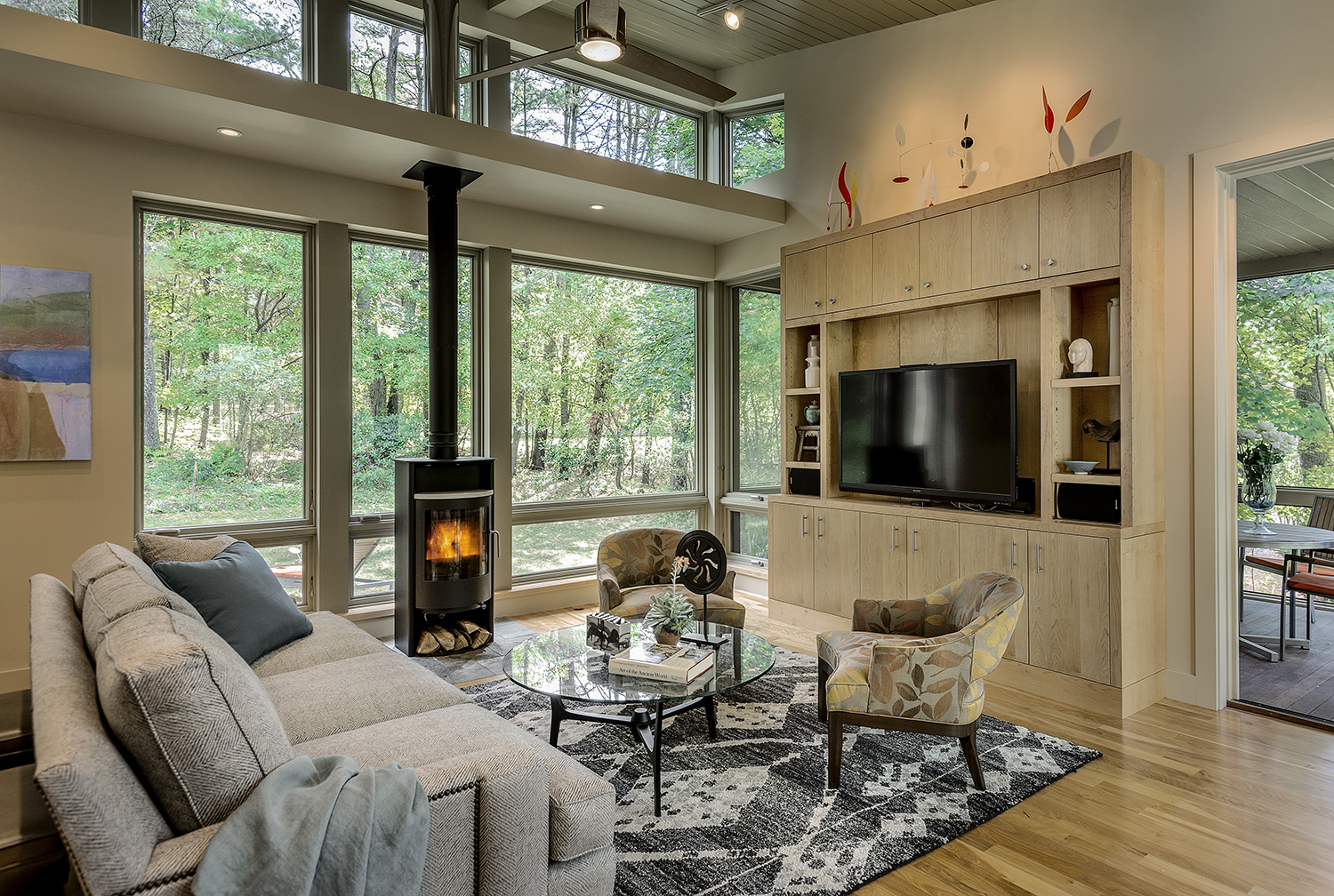 A sculptural wood stove provides both warmth and a focal point in the living room.

Yen and Lee were also feeling cramped in the three-bedroom house they and their seven-year-old son and two-year-old daughter had moved into in 2004 in the nearby Velvet Rocks area. “While my parents’ house had many fond childhood memories for me,” Yen says, “Stephen and I knew that the 1960s floor plan and design were not conducive to our lifestyle and needs.”

To help figure out what to build in its place, the couple turned to Smith & Vansant Architects PC, in White River Junction, Vermont, a firm Yen and Lee had heard about from one of Yen’s colleagues.

Initially, neither Lee nor Yen had a strong opinion about what type of house to build. So architect Pi Smith had them do some research. “Our homework was going through magazines to see what architectural styles we liked and disliked,” Yen says.

At some point, Lee recalls, he was struck by one picture of a house that was surrounded by woods and had a mono-pitch roof. The picture resonated with him and became the seed for the house they would eventually build. “It grew on us,” Lee says of the modern design. Finally, the architects presented the couple with two plans—one for a traditional home and the other for a contemporary, which they ultimately chose.

Yen and Lee did have some specific goals for the house. First, they wanted more room and light. They liked wood and other natural materials. Because Yen and Lee are both of Chinese ancestry, they wanted a bit of an Asian influence. And they definitely were seeking a kid-friendly house.

The architectural team—which included John Vansant, Ira Clark, Sue Reed and Stephen Branchflower, in addition to Smith—had goals as well: namely a house with the flow and airiness that the earlier building lacked. “That house felt a little dark and enclosed,” Clark says.

“The spaces were constrained,” Smith says, “and the house didn’t have a great relationship with the land.”

One of the challenges, Smith explains, was that the building site was in a sort of bowl with tall trees surrounding it. The team had to orient the new house carefully to receive maximum light while also maintaining privacy (there are neighboring houses close by). “We wrapped many corners with windows, so you have the feeling of the landscape surrounding you,” Smith says.

And the team carefully positioned window locations so the occupants wouldn’t be looking directly at nearby houses.

Yen and Lee hired O’Hara & Gercke, of Wilder, Vermont, to do the building. “We interviewed several contractors, and we bonded best with Kevin [O’Hara] and his group,” Lee says. Before the old house came down, Yen and her siblings came together to clear it out. They had no qualms about replacing the house, Yen says, but still, “It was bittersweet.” 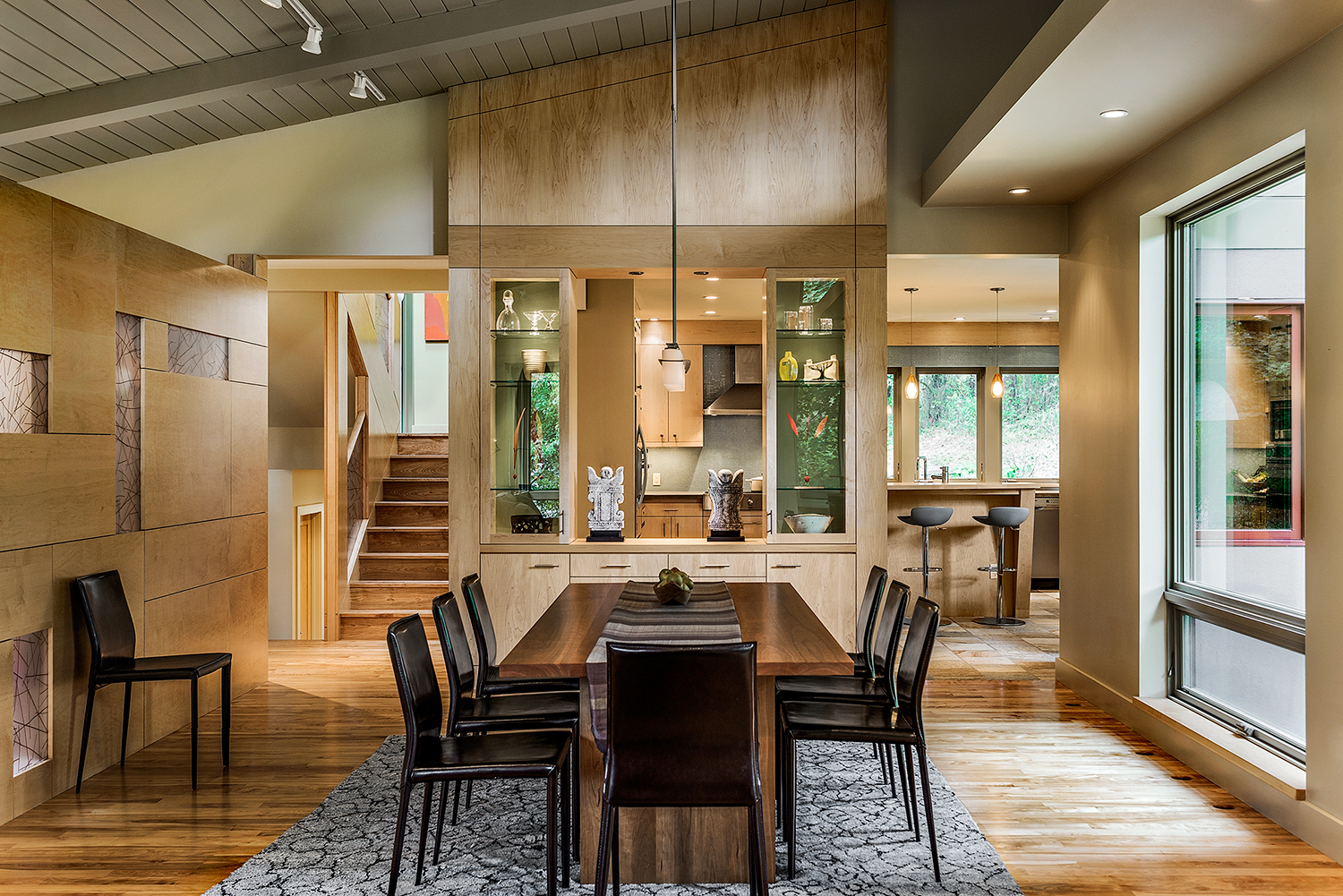 The kitchen (in the background) is visible from the dining room, yet separated by a pass-through wall.

The finished house has five levels, each divided by a half level of stairs. As you enter from the front, at garage/mudroom (grade) level, the kitchen, living room, dining room, study, back porch and screened-in porch are half a level up. Half a level down from the grade-level entrance is the basement, which includes a rec room with windows facing the street as well as space for storage and mechanicals. From the dining room, the two kids’ bedrooms and bathrooms are half a level up, over the garage. The master suite and guest bedroom, half a level up from the kids’ level, are at the top of the house.

“The stairs are an organizing vertical element among the different levels of the house,” Smith says. The architects also used the stairs to create areas of public and private space.

The architects also employed partial walls as organizing elements. The study is set off from the living/dining room by a wall that does not quite touch the ceiling. This allows for a separate space that still feels connected to the rest. This partial wall treatment also occurs in the master bedroom behind the bed, creating a kind of headboard reference.

Woven throughout the house are recurring design elements of maple-stained wood; horizontal and vertical grooves in the built-ins and panels; and rectangular shapes, including reveals of translucent resin embedded with twigs, a sustainably produced material called 3form. Smith says, “We were trying to figure out ways to let in more light, and this material was more interesting that just a sheet of glass.” The resin is also used for panels alongside the stairs.

The color palette includes natural and neutral tones as well as some soft blues and greens. “The design team used soothing colors,” Yen says. Yen and Lee left those choices primarily to the architects and interior designer Denise Welch May, of DPF Design, in White River Junction, Vermont.

The kitchen features quartzite flooring, custom concrete countertops and cabinets by Hitchcock Woodworking, in Wilder, Vermont. An asymmetrical island with stools stands in the center of the kitchen. The architects used this asymmetrical motif several times throughout the house, including for the bench in the master bathroom shower as well as the built-in benches in the foyer and mudroom.

The living/dining areas are adjacent and open to each other, yet somewhat set off by the narrower space allotted to the dining room (the study is on one side of it). Walls of tall windows line the living room/family area, creating an “inside-out” feeling. A piano and sculptural wood stove are focal visual elements.

The dining- and living-room furniture pieces —including a large, gray couch and a red Womb Chair designed by Finnish-American architect and industrial designer Eero Saarinen in 1948—were purchased for the new house, and relate to the spare and simple lines of the new architecture. The couple did keep a few items of furniture, including, in the master bedroom, a traditional sleigh bed. The bed looks at home amid the modern decor.

Outdoors, the original house had limited yard space. “This is a family with two kids who wanted to use the land more effectively,”Clark says. So the new design features a larger yard and some easy-to-care-for plantings. Landscaping was designed by Janet Cavanagh, of Janet Cavanagh Landscape Architect, in South Strafford, Vermont. “We are busy professionally,” Yen says, “so we wanted something low-maintenance.” Cavanagh chose hostas, shrubbery and some annuals, but kept things simple, she noted, as deer tend to eat many of the plantings.

Lee says the design is rather vertical due to the limited available footprint as well as the need for light and privacy. So the family uses the stairs a lot. He concedes this might prove a challenge when they are older, but for now, it’s good exercise. He particularly likes the staircase with its unique materials and angles.

He also enjoys sitting in the living room. “It’s a great place to hang out with the kids,” Lee says. “And I enjoy the windows.”

Both homeowners are glad they consulted an architect going into the project. “I didn’t realize there were so many choices,” Yen says. “We had such great support from the architect and contractor. We’re really proud of the workmanship.”

Although would-be homebuilders can buy proven plans and hire a builder to construct a house according to those plans, Lee says, “Smith & Vansant maximized the space in ways that were intriguing and inviting. They created a unique structure that speaks to our needs at this place and time.” 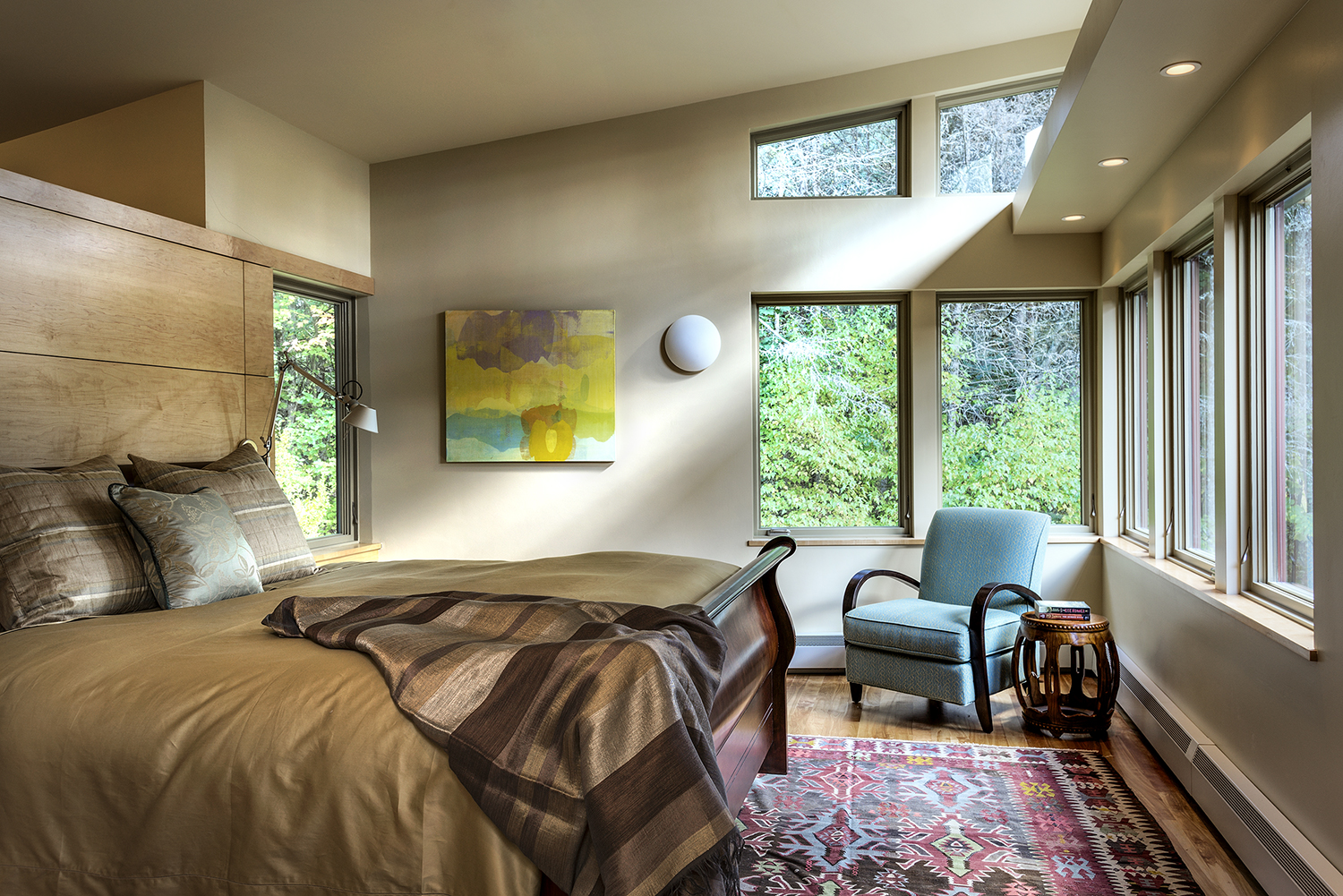 The sleigh bed in the master bedroom belonged to the homeowners before the new house was built, and it was important to them that it be incorporated into the new design. 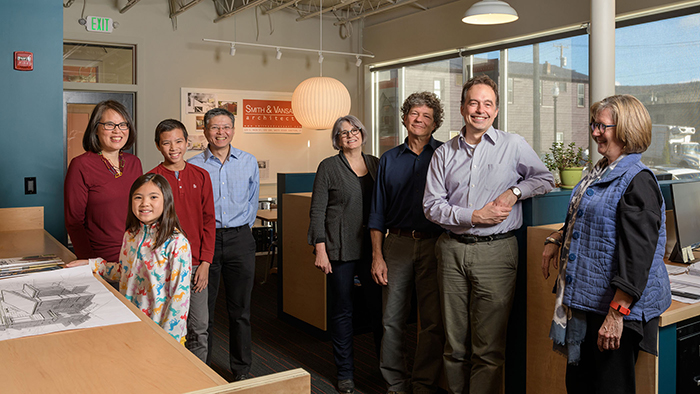 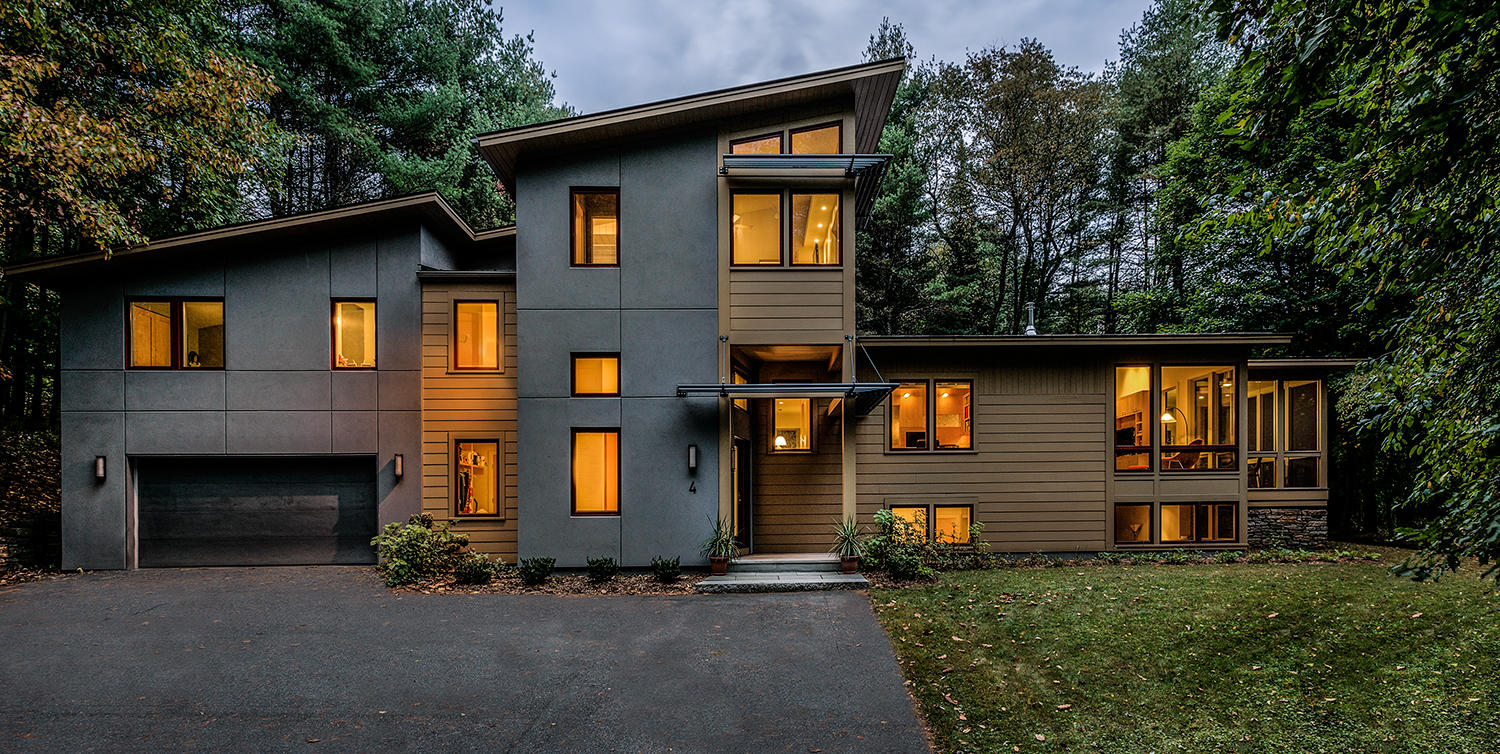 The house’s slanted roofs add variety and asymmetry to the straight lines and rectangular shapes that make up the majority of the design. 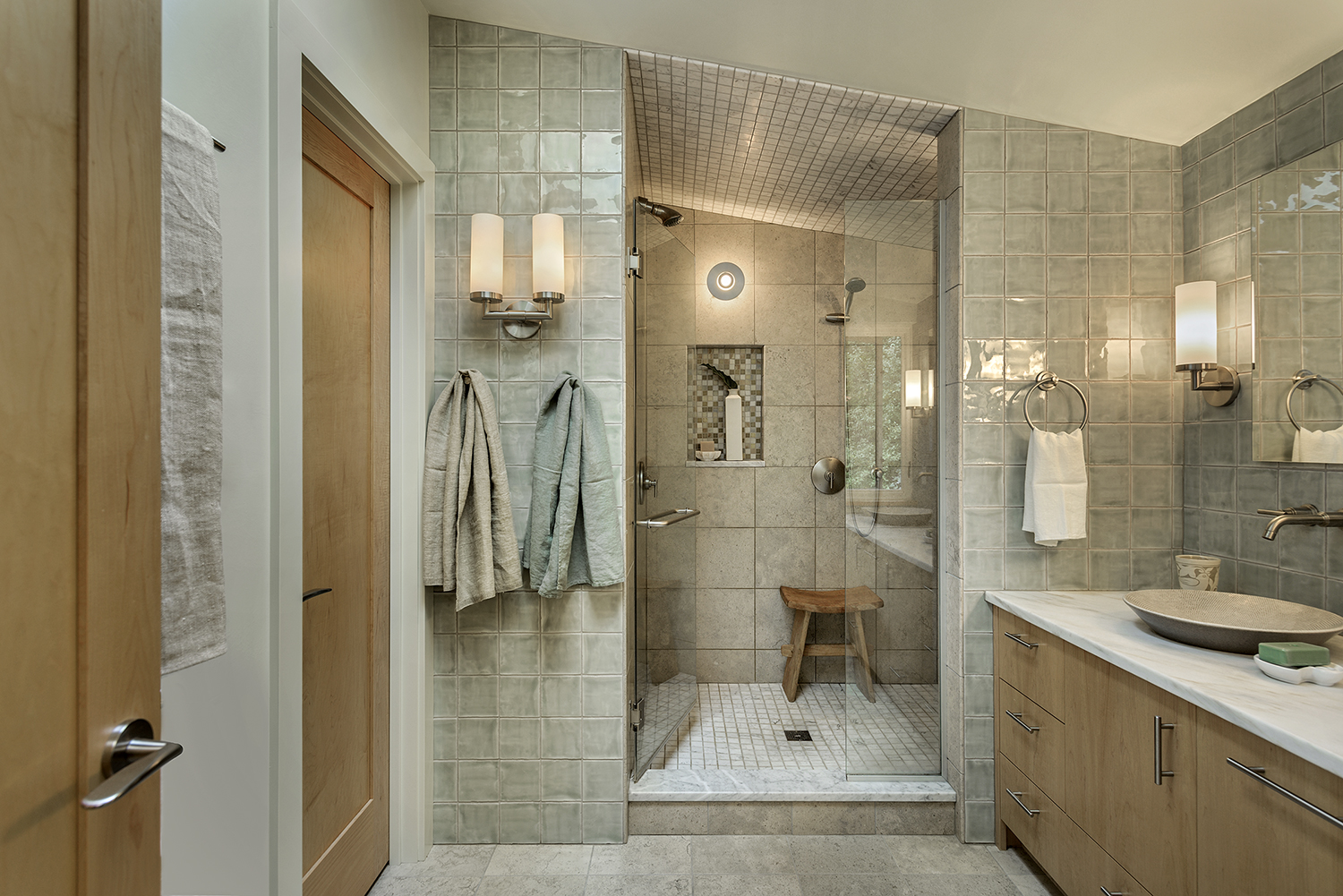 The master bathroom uses a neutral palette with wood to create a peaceful retreat.