On his extraordinary Deerfield property, potter Al Jaeger has crafted a luscious landscape that includes gardens, orchards and a pond.

Small clay houses, tiny castles, mini-lighthouses and dwarf cliff dwellings landscaped with mosses, ferns, bark and stones line the half-mile-long, wooded driveway that leads to Bluefields Farm in Deerfield. Near the center of this 186-acre parcel of land, potter Al Jaeger has created his own secluded paradise on earth.

When he bought this property in 1968, it was totally wooded. He tented in various spots, cleared swaths to assess the sight lines and nature of future fields, and, in 1972, built a modest house of lumber cut from the land. Jaeger was teaching art in public schools and worked each summer to clear another new field. “Gradually, six acres opened up,” Jaeger says. “This land is very voluptuous, the way it rolls and folds in on itself.”

Over the years, Jaeger has done extensive landscaping, creating gardens in different spots, and planting trees, orchards and berry bushes. And what’s a farm without a pond? In 1973, Jaeger and his brother Bob rented some heavy equipment and spent the long Fourth of July weekend digging a pond. “There was a wet area at the bottom of the rock ledge where I had cut down some swamp maples. We pushed the stumps and rich topsoil to one side, and dug deeper for subsoil to form a dam. The next March, it filled up with water and I had a pond!” Jaeger says. “There are a couple of small seasonal brooks that run into it and some springs there, too, which make it a nice swimable pond, about two acres in size.” 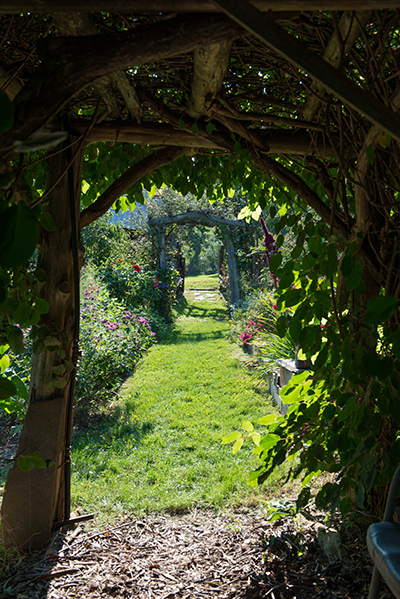 Jaeger has built several arbors using hemlock, arborvitae and locust for their durability. Into the arbors, he often incorporates found objects, like rusty gears and interesting pieces of
old farm machinery. Here these arbors line up to direct the eye to views beyond the garden.

When his first house burned in 1990, he rebuilt in a new spot high on a knoll, even farther from the road. “I had no money at the time. My neighbors, along with the New Hampshire Potter’s Guild, Notre Dame College and the New Hampshire Institute of Art got together a few thousand dollars for me,” Jaeger says. “On Saturday mornings, two or three volunteers from the Potter’s Guild would show up, each with a saw, hammer, tape measure, pencil and apron.” In six months, the house was done, constructed entirely of wood and stone from his property. “It was an affirming sense of community,” Jaeger says.

Living with the land

Three years later, he built a studio about thirty-five feet from the house. Since then, he has worked on terracing the south-facing slope, creating paths and planting beds that lead down to a large garden area, which he has enclosed with a five-foot-high stone wall built with rocks gathered while clearing the property. “There are more deer now than forty years ago, but they don’t get into the garden. At five feet, the wall is tall enough that they can’t see what’s on the other side so they don’t dare jump over it,” Jaeger says.

Thriving in the protection of the microclimate created within the stone walls, vegetables mingle with perennials, self-sown annuals and fruit trees. “You name it, I grow it!” Jaeger says. And he does not exaggerate! There are Brussels sprouts, kale, gorgeous peaches and peppers interwoven with poppies, amaranth, zinnias and dahlias to mention just a few. Jaeger’s root cellar provides the perfect conditions for storing squash, potatoes, garlic, onions, carrots, beets, celeriac, parsnips and apples for the winter. “It feeds me all year,” Jaeger says of his garden. “There are blueberries and peaches in the freezer, and I also can tomatoes and vegetable soup.”

In his greenhouse, Jaeger starts all the plants for his garden from seed. “I can get much more interesting things from the Fedco Seeds catalog than I would ever find at a big box store,” he says, “and they are more suited to our climate and soils.” He grows eight or nine varieties of tomatoes, including heirlooms such as ‘Mortgage Lifter’, ‘German Johnson’ and ‘Brandywine’, along with large paste tomatoes, such as ‘Hog Heart’, ‘Amish Paste’ and ‘Grandma Mary’. He grows ‘Principe Borghese’ tomatoes to dry, slicing them in half, lightly salting them and placing them on racks in his greenhouse. “Two days in the summer sun does it,” he says. Some of his other favorite vegetables are ‘Apple Green’ and ‘Galine’ eggplant as well as ‘New Ace’, ‘King of the North’ and ‘Carmen’ peppers.

Since Jaeger built both his homes so far from the road, he has lived off the grid since 1968. “It wasn’t a political statement, it was just necessity,” he says. Jack Bingham of Seacoast Energy Alternatives designed, installed and maintains the system that consists of two solar panels on the roof above the greenhouse (they heat water for the house and for the radiant floor heat) and an array of photovoltaics in the field southeast of the house (they power everything else and use batteries to store electricity for use on cloudy days). The passive solar greenhouse heats the house on a sunny day, and Jaeger cuts enough wood from his property to fuel his woodstove. 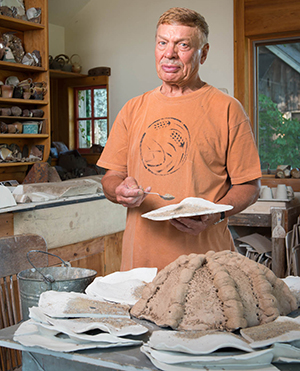 Al Jaeger derives great joy from working with clay. Make plans to visit his studio during the Deerfield Studio Arts Tour on October 18–19.

Not all the wood goes up in smoke. He has some milled for future building projects, like the sauna he is working on, and he often finds an interesting, twisted piece to incorporate in an arbor, fence or gate. Jaeger has built a series of arbors that line up from east to west, directing our line of sight to a tree in an outlying field. “I like that sense of alignment,” he says. One arbor has both a prolific kiwi and a grape vine growing on it; one is covered by a peach-colored ‘New Dawn’ rose intertwined with a deep-blue clematis; another supports a white clematis.

Beyond that distant tree is a cemetery for the Ballou family, French Huguenots who settled in this part of Deerfield in the early 1700s. “This property was their farm,” Jaeger says. “When I first moved here, someone in town said to me, ‘I see you have bought the Blue fields.’ I wondered what about them was blue. After discovering the old Ballou cemetery, I decided to keep the corruption of the name and call this place Bluefields Farm.”

About 450 feet from the house, Jaeger and the members of the Potter’s Guild have built a wood-fired community kiln. “We like to joke that New Hampshire is a ‘hotbed’ of wood-fired kilns,” Jaeger says (there are about six statewide). Four times a year, guild members gather here to heat the kiln and fire their pottery. Even though most of the potters have access to modern electric or propane-fired kilns, the wood-fired kiln produces superior results in texture, color and surface. The firing is also quite an event, since the process takes three days and three nights to complete with at least twelve people working in shifts. Cast-off slabs from neighbor Pete Mahoney’s sawmill are used to fuel the fire and, in return, Pete gets a finished mug.

More of Jaeger’s clay houses and petite pieces of exquisite architecture are located around the gardens. “But I don’t do many clay houses anymore,” he says. “My work has morphed into stones. I live on this wonderful piece of earth covered with granite, gneiss and quartz that I incorporate into clay and work into rock-like forms. The high-firing temperatures melt the iron in the rocks, the feldspar puffs up like popcorn and the granite is totally unpredictable. I love the results.”

The works are attached to panels that can be hung on walls. He sells his work through the League of New Hampshire Craftsmen stores, at McGowan Fine Arts and the Mill Brook Gallery, and he has pieces on display at the Currier Museum of Art. One weekend a year, Jaeger opens his studio to the public during the Deerfield Studio Arts Tour (October 18–19 this coming fall). 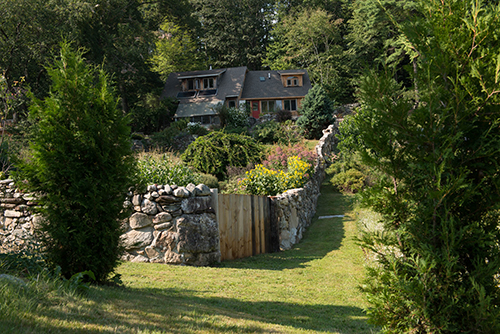 Jaeger built the high stone wall, which protects his vegetable garden from marauding deer and creates a warmer microclimate that extends the growing season in spring and fall.

Jeager’s connection to his land runs deep. So to preserve it for future generations, he has protected most of his acreage with a conservation easement held by the state’s Land Conservation Investment Program (LCIP). He is on the board of directors of the Bear-Paw Regional Greenways, a land trust working to conserve a network of lands that protect water, wildlife habitats, forests and farmland in Allenstown, Candia, Deerfield, Epsom, Hooksett, Northwood, Nottingham, Raymond and Strafford. Bear-Paw has forty-seven easements and five preserves totaling 5,298 acres. Jaeger has worked with his neighbors to protect about seven miles of Great Brook (which crosses his property beyond his fields) by connecting large areas of contiguous wild lands to form the Great Brook Corridor. He rests easier knowing that the paradise he has found on this earth will provide sanctuary for others in the future.