Opening up a Seacoast cottage

A front-facing deck, a stone turret, and lots of new windows were three of the major additions to the classic home designed by Rob Carty of TMS Architects in Portsmouth and built by C.M Ragusa Builders in Seabrook.

When Tom and Kathy Huff bought a three-bedroom house on the New Hampshire Seacoast eight years ago, they were delighted with its location—the house is set back far enough from a busy road to provide privacy but is also fronted by a large, lovely lawn that affords views of the Atlantic Ocean.

This North Hampton Seacoast cottage, which began life as a barn in the 1800s, had been added onto over the years in such a way that its rooms were small and it suffered from a general lack of flow. The Huffs wanted to open up the living space for entertaining friends and family; they also wanted a fourth bedroom to accommodate their three grown sons and their families, including five grandchildren.

Two years ago—with the assistance of Rob Carty from TMS Architects in Portsmouth and Chris Ragusa of C.M. Ragusa Builders in Seabrook (with foreman Bob Hogdon)—the Huffs embarked on an ambitious project that involved renovating most of the house’s first floor and increasing the size with a stone turret addition that provides a striking and welcoming entrance.

The front area of the great room, which includes a bar, has an arched mahogany ceiling designed to look like the hull of a ship.

The house, with its cedar shingles and white trim, still has a traditional Seacoast look but has been greatly altered. “Pretty much the entire first floor was gutted and redone,” Carty says. “It was an older house—classic—that had been added onto over the years. The inside was really compartmentalized.”

The renovation crew removed a portion of the house and added to the front area to create a great room that leads to a semicircular deck. Carty’s design increased the footprint as much as possible and added some height with the turret, while adhering to setback and height restrictions. “We tried to use every square inch,” Kathy says.

What was probably the biggest challenge of this renovation, according to Carty, was creating the open space in a building envelope of limited scope. “There are always things you could have done differently if you had all the room in the world,” he says, “but we had a long, narrow lot.”

The new first-floor living area incorporates the great room with ocean-facing bay windows that look out over the deck. The back half of this space is a kitchen, with an L-shaped, built-in bar and a large, bronze sheet-metal-topped kitchen island overlooking the cooking area. This is the dining space for the house, as the Huffs decided to forego the previous formal dining room. Next to the kitchen is a smaller living area with a fireplace, and attached to that is the former dining room, now an office, which can be closed off from the rest of the space with sliding pocket doors. A half-bath was also added during the renovation, and a guest bedroom suite was built where the former kitchen (and original barn) stood. Upstairs, there are two bedrooms in addition to the master, along with a landing area that serves as a playroom and TV-watching area.

The attached stone turret does double duty as a covered entrance (one of the homeowners’ other goals had been to gain a front entrance) on the ground floor and as Tom’s art studio on the second floor. The upstairs section of the many-windowed turret opens into the master bedroom and offers ocean views. New and larger windows were added throughout the house, most with fewer panes than their predecessors, to let in more light and highlight the views. 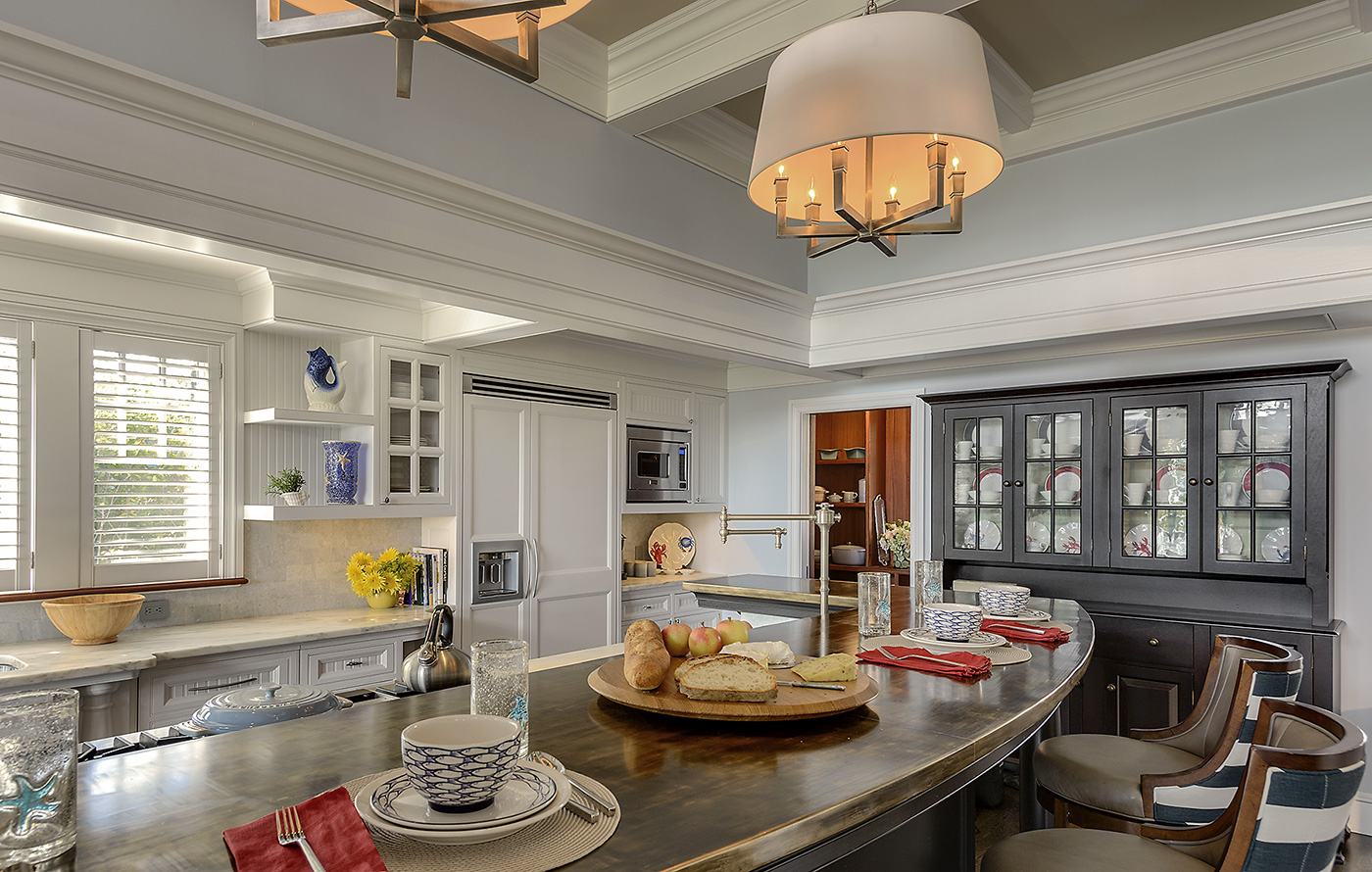 The white-paneled kitchen has a dark-paneled pantry (through the doorway on the right), which is designed to reference a ship’s galley.

Inside the house, the décor incorporates crisp whites and shades of blue with dark-stained wood to provide a nautical feel. “The concept I talked to Tom about early on, and what he kept telling me, is that this is a beach house,” Carty says.

That nautical concept, plus Tom’s predilection for what Kathy calls “unique ceilings,” led to one of the most striking aspects of the house: the arched wooden ceiling in the great room, which resembles the hull of a ship. Its “beams” are strips of inch-thick, solid sapele mahogany laminate that Ragusa and his crew fabricated on site,
bending the wood into form once inch at a time. (All carpentry and cabinetry, including the moldings, were designed by TMS and built by Ragusa’s team.)

The stone turret, topped with ship-shaped weather-vane, looks like it has always been part of the house, but was added recently.

The living room also has a dark wooden ceiling, though more conventionally flat, and the pantry off the white kitchen is also paneled in dark wood, which Carty designed to hint at a ship’s galley. Another subtle nautical reference is in the columns in the main living area, a derivation from the Tuscan variety, says Carty, with rounded capitals that reference ships’ mooring bollards.

The Huffs, who are based in Ohio, are interior designers for commercial spaces by trade, so they handled much of the interior design themselves, assisted by Cristina Marais, TMS’s interior designer. The downstairs living area has walls covered in soft blue-gray paint above white wainscoting that comes halfway up the wall. The primary furniture and fabric palette consists of white and various shades of blue, with boldly striped stools for the dining area and a bar in the great room. The floors are white oak, stained dark, over which are laid sisal rugs. The kitchen features white woodwork.

There are a few direct nautical references—a model sailing ship over the mantel, a fish-shaped jug on a shelf in the kitchen—and the most lovely of these is the stunning oval, stained-glass window over the bar in the great room. The window—surrounded by small, blue subway tiles—features a ship in full sail. It was commissioned especially for the Huffs by BeauVerre Riordan Stained Glass Studios in Middletown, Ohio, and uses different thicknesses of leaded glass for depth and contrast. There is another, “regular” window on the other side of the exterior wall that protects the stained glass. The effect when the sun comes through is striking.

The tower, which Carty says is probably his favorite design element in the house, is made from New Hampshire fieldstone. “I like the feel of that entry,” he says. “It’s a nice scale.” The floor of the tower/studio room upstairs incorporates a compass rose inlaid in marble, aligned to point in the correct direction.

For the exterior of the house, Ragusa and his team used cedar shingles and white PVC trim. Ragusa’s company, which has handled projects from Boston to Lake Winnipesauke, has developed what he calls some “proprietary techniques” to make oceanfront houses stand up to wind and salt water. “We want it to look good when we’ve just finished and also ten years later,” he says.

Besides the new front deck, the Huffs added to an existing brick patio and incorporated some plantings. The latter are both in beds and planters placed strategically to frame the front deck and back patio as well as to create an “outside in” feeling (there are dining and seating areas on both the deck and patio). Site Structures Landscape of Kittery did the landscaping.

A bocce court that the Huffs had installed before the renovation was retained, and provides fun for visiting grandchildren and adults alike. A newly installed white-paneled outdoor shower off the patio comes in handy when homeowners and guests return from the ocean across the road.

A tight turnaround. A tighter team

The entire renovation was accomplished in slightly under a year. The Huffs began talking with the architect in the spring and hired a builder in late summer. They wanted the work done by the next Labor Day, and it was. “Renovation is always a challenge,” Carty says. Everyone on the project worked well together, according to Ragusa. “I think the success of this project was the team effort,” he says. “Like the stability of a three-legged stool, the relationship between the client, builder and architect is what really stood out for me.”

When asked about her favorite part of the renovation, Kathy replies that was combining all those little rooms. Now she and Tom have a big, open space in which to enjoy the view of the Atlantic Ocean in the company of family and friends. 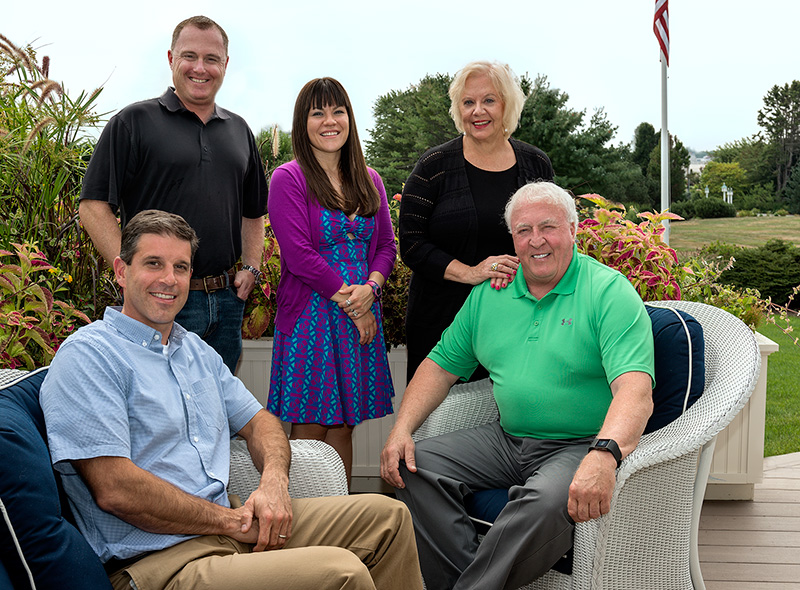