Out on a limb in a tree house

A beautiful old oak tree in a waterfront back yard inspired a New Hampshire homeowner to think beyond clunky swingsets when it came to creating an outdoor playspace for her two children.

The tree’s massive trunk and high limbs provided the natural foundation for a custom-built tree house that stimulates the children’s imaginations and draws them outdoors and away from the technological trappings of the twenty-first century.

“The tree house inspires my children to think outside a box in a world where you’re taught how to dress or act,” the homeowner says. “It’s a magical tree house—they go out and play by themselves. They get home from school and make a beeline to the tree house—not to the TV or computers.”

The design of this one-of-a-kind, hand-built tree house began with the homeowner’s simple sketch, which was shown to woodworker Jon Piatt, a friend and craftsman who built some furniture for the household in the past, and his associate Erik Ward, a machinist/welder.

Not a fan of right angles—not even in the family’s main house—the homeowner knew from the onset that the tree house would be custom-built around the trunk. “I like nooks and crannies,” she says. The back of the tree house is square with a curved front-deck area that hugs the tree trunk; from the outside, the shape mimics a castle’s turret. The space can hold three adults comfortably—or many more small children.

The box-jointed, interlocking timber frame of the tree house was built off-site at Piatt’s workshop, Apex Creations in Lee, and assembled in the yard. Piatt consulted with an arborist to ensure the construction would not harm the tree, and only six large supporting pins were affixed to the trunk. The structure has a three-inch gap around the circumference of the tree to allow for growth.

There are two cut-out, arched windows with shutters and one nautical-themed portal in the tree house. Window boxes made from hollowed-out cedar logs decorate the arched windows.

“Eric and I spent quite some time working out all the details from the beginning,” Piatt says. “We knew we wanted to have something special—not a simple box in a tree. And to be afforded the opportunity to do that, using the homeowner’s creative ideas and sketch, is rare.”

One key feature of the tree house, Piatt says, is that with exception of the mahogany decking and the cedar roofing, the woods used were all locally sawn and milled.

The railing up the steps has its own story. “The rope, called the line, is from a famous yacht that sailed around the world—the yawl, Bolero,” Piatt says. Piatt’s landlords sailed the yacht for its owners and maintained the vessel, which, from time to time, needed its lines replaced. Piatt was able to use some of the older line—which was still in great shape—as railings on both sides of the ladder/steps that lead up to the tree house. The stair treads were salvaged from excess walnut or Ipe pier planking from the Seacoast.

As for aesthetics, most of the visible hardware—such as the supporting brackets—was handmade. Ward welded prettier hardware pieces together to achieve a decorative look, Piatt says. 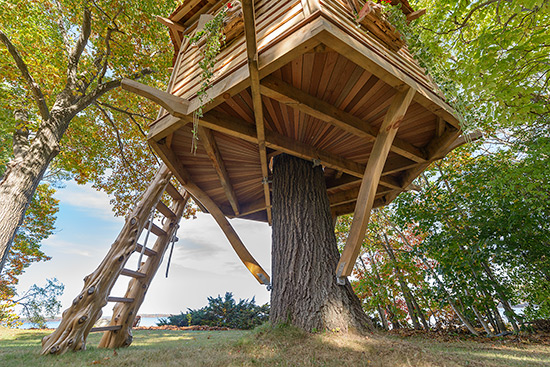 The tree house is one big symmetrical hexagon that encircles the oak tree’s trunk.

The homeowner says the entire endeavor was a joy for her family and the children, and that working with Piatt and Ward was a pleasure.

“It’s not common to find people who really want to achieve a certain level of quality,” the homeowner says. “This is not just a job for them—it’s an art. That totally shows in their work.”

The tree house was completed late in the fall of 2014, and since then, the homeowner has added a zip line from the tree house to another tree across the yard at the request of her adrenaline-loving youngsters. This summer, she will likely add a pulley system to hoist up lunches and stuffed animals.

Would she recommend a tree house to other parents? “Definitely, you want to inspire your children,” she says. “I love the outdoors, and anything that can inspire your child to go outdoors and use their imaginations is a plus. The tree house gives them a space of their own.” 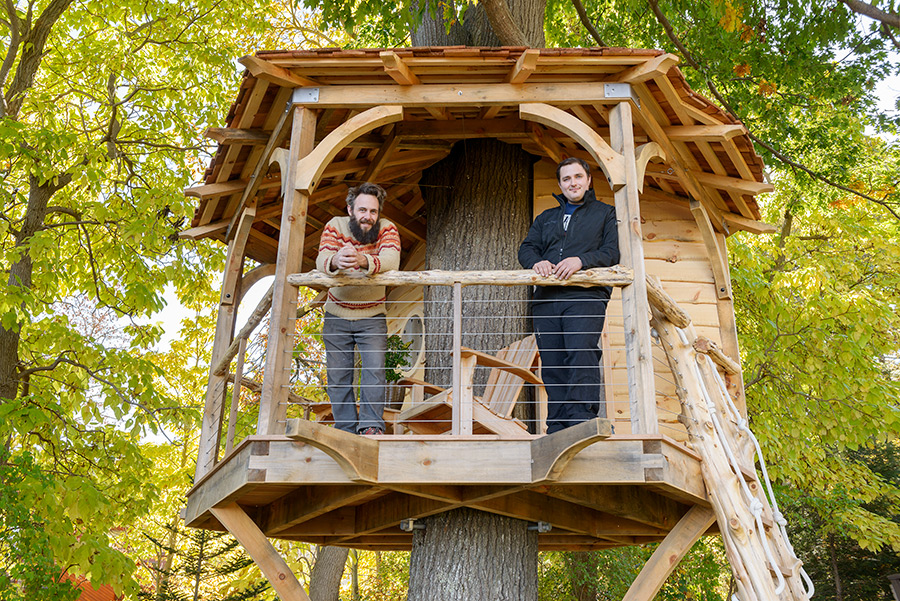